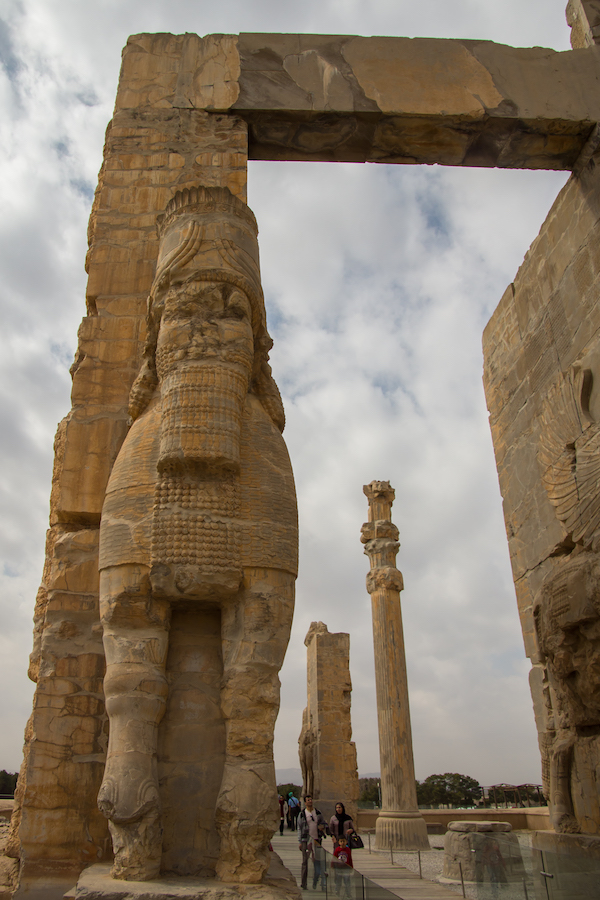 In the Footsteps of Alexander at Persepolis

There it was, we had finally arrived!

History books have made me dream of ancient places, imagine how buildings and life must have been. And Persia and its history was always special to me. But one thing is to imagine and another thing is to actually stand in places that until now had only been real in books.

I could not believe that I was finally going to walk in the footsteps of Alexander the Great at Persepolis. Here I was standing in front of the terrace stairway. The double stairway that would take me to discover the remnants of the glorious past of Persepolis.

Founded in 518 BCE by Darius I it became the capital of the Achaemenid Empire consecrated to the one God, Ahura Mazda.

An empire comprised of different nations, each with its own history and culture. Periodically, the highest dignitaries of each nation were received at Persepolis. Great festivities and festivals were also held here. The most important festival was without a doubt Nowruz, the festival that marks the beginning of spring and the Persian New Year and which is still celebrated today in Iran. 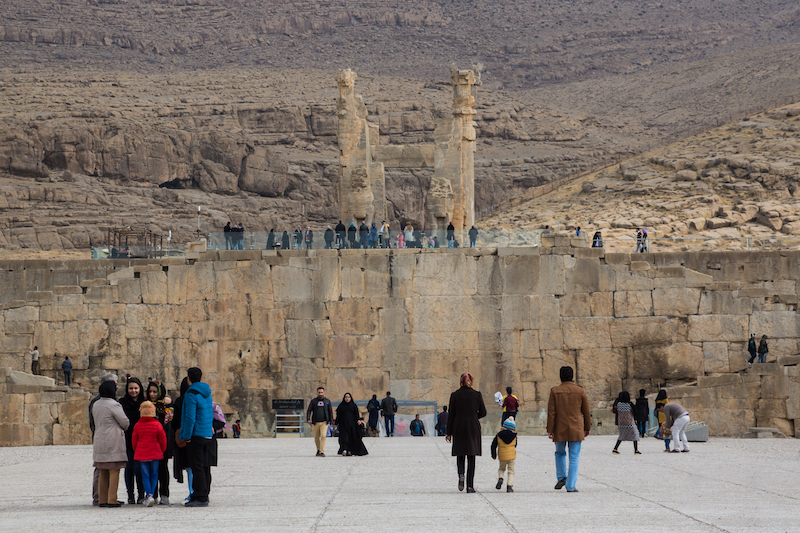 The sky was grey and as it was still winter, I expected cold too but instead it was warm and stuffy like a storm was approaching. Iranian families could be seen already anxious to start exploring. It was weekend in Iran so we had expected to see more people. No tourist groups at a first glance, I was happy, more freedom to see things at my own pace.

I wondered what sort of day it was when Alexander the Great and his troops finally arrived at Persepolis in January 330 BCE.

Appropriately we took the left side, the side of the foreign dignitaries. They say the steps were low so that they wouldn’t have problems with their official attires and could walk in a dignified manner. 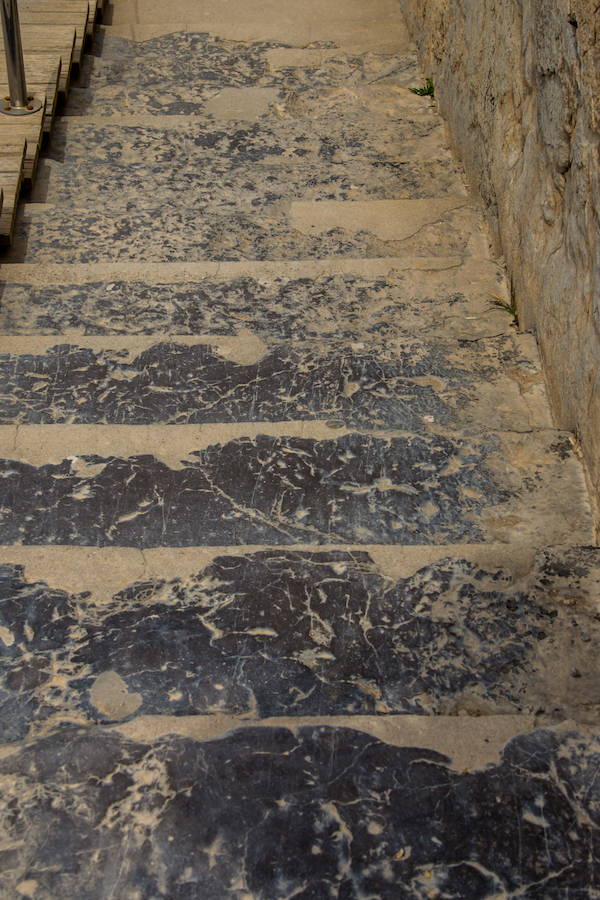 No attires to worry about in my case, just the scarf to be kept in place. Once we got up there, we reached the Gate of All Lands guarded by two impressive human headed winged bulls. They represented the prosperity of the Persian Empire. 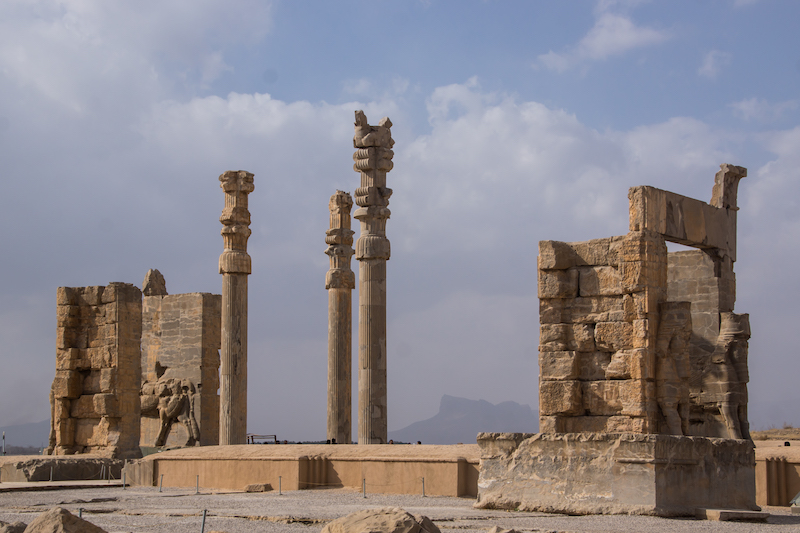 You can only imagine what the foreign delegations from across the empire would have felt crossing this gigantic gateway on their way to meet the king of the mighty Persian Empire. 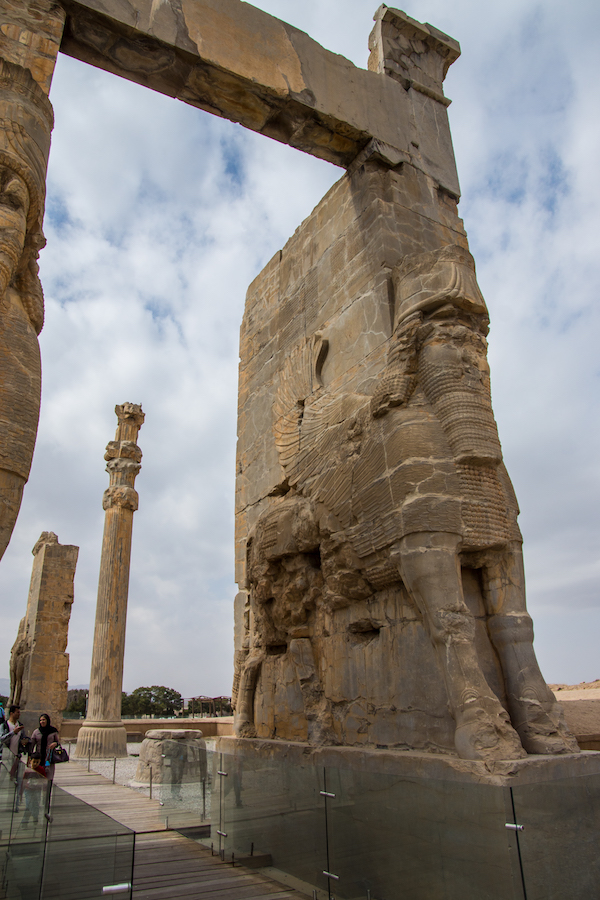 They came annually bearing gifts to show their allegiance. Would they have been fearful or excited to be in the presence of the king of kings, Darius I? I suspect probably a combination of both. Once they crossed the threshold of the Gate of All Lands they were led through the so called “Army street”.

There was a long corridor with thick mud brick walls and every few meters, there were niches where royal guards would have stood during official occasions. Remains of the guards rooms to the South and workshops for stone masons to the North were also found.

We can see some remnants of damaged and even unfinished pieces like the zoomorphic griffins column or this gate which led to the hundred column hall. 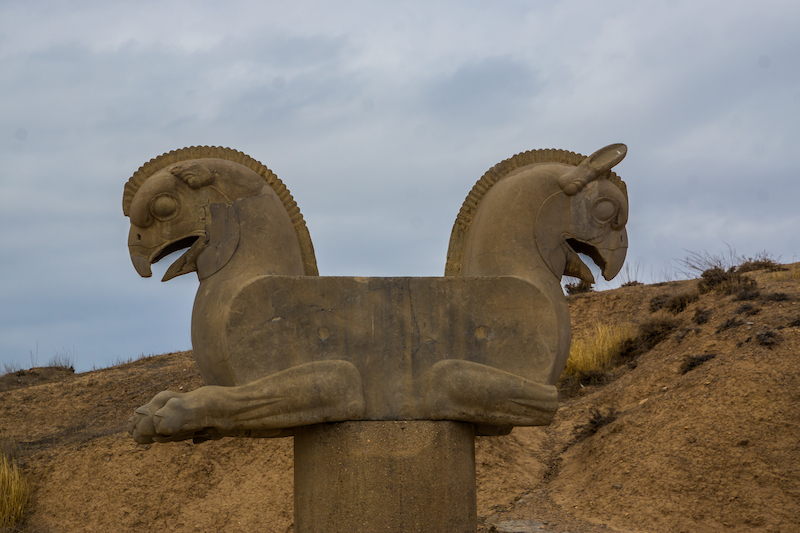 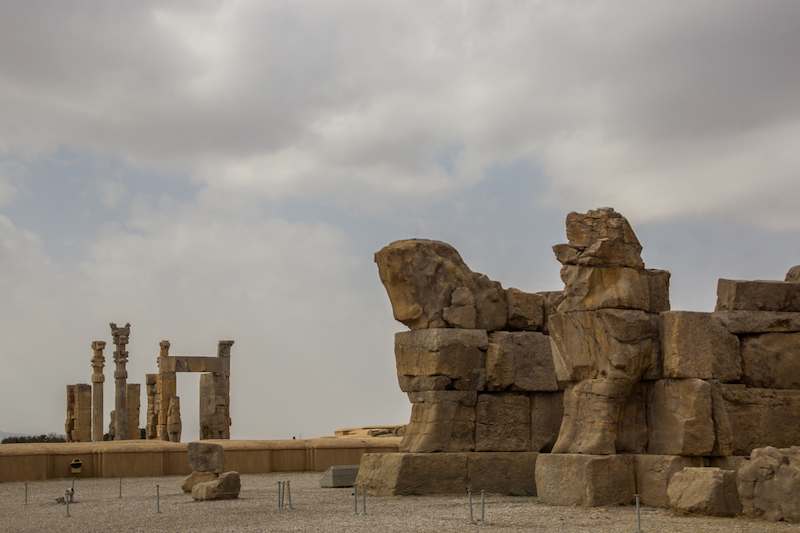 A gate that was left incomplete probably due to the arrival of Alexander and his troops. but still standing as a reminder of a plan that could no longer be finalized.

It was time to approach the Apadama or the Audience Palace. Darius I ordered its construction in 515 BCE and works were completed 30 years later during the reign of his son Xerxes I. 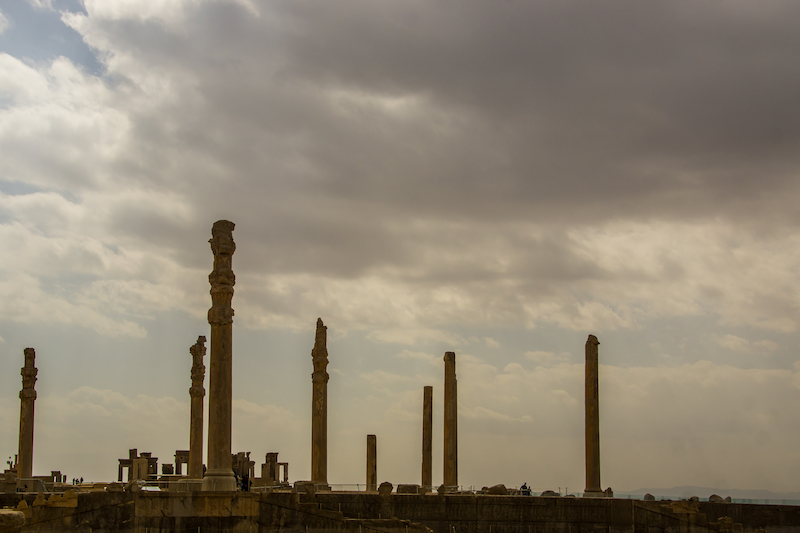 It must have been a sight. A central hall that could welcome up to 10.000 people. The over 19 meters high columns. The roof of the palace made of cedar beams brought specially from Lebanon. The walls covered in colorful tiles with animal and floral motifs. The two main monumental doorways covered with gold sheets and many other details unfortunately lost through time.

Still standing are some of the columns and other details that allow you to imagine how impressive and monumental the Audience palace must have been. 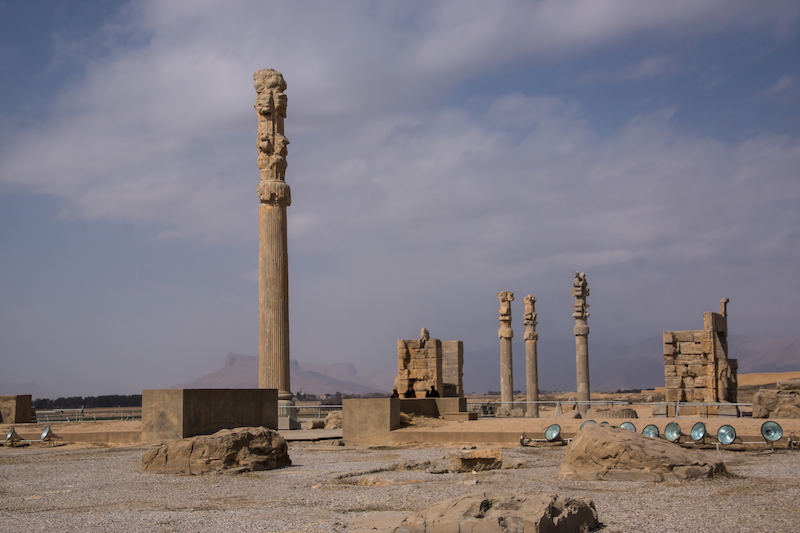 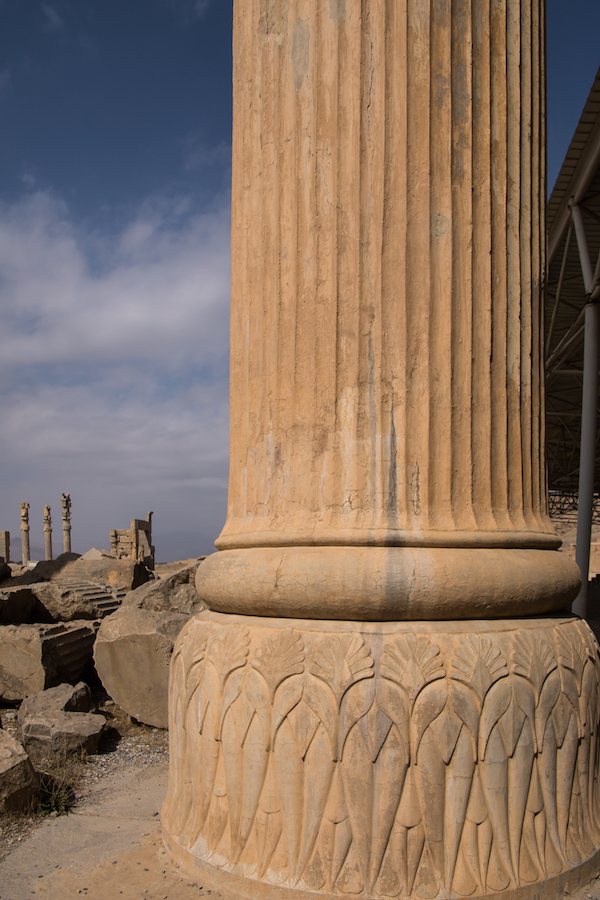 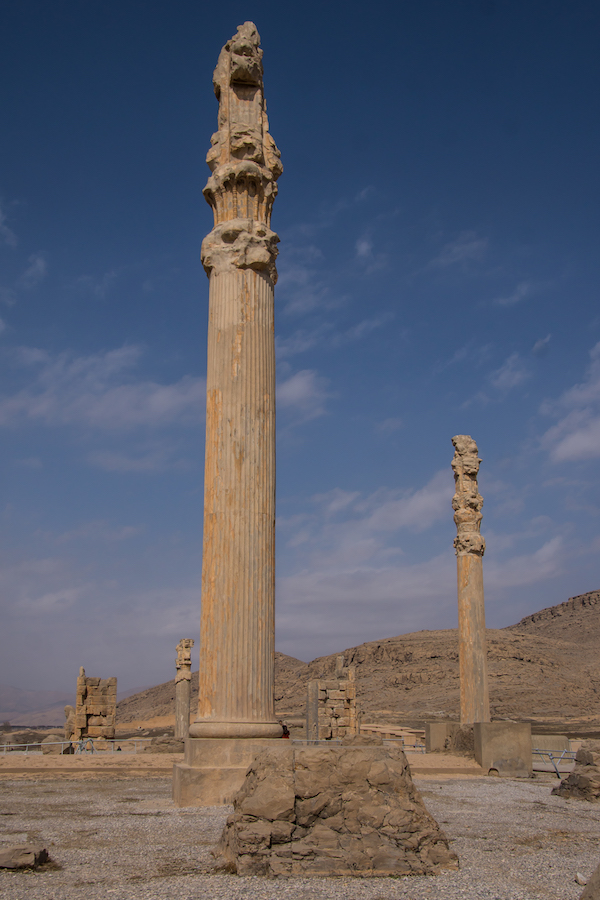 There are actually many details about the foreign delegations. Before stepping into the audience hall where the king awaited, sitting on his throne surrounded by his son and court officials, they had to go up another staircase.

Actually there were two main double sided staircases. The one on the right was for the Persian and Mede state and military officials and the one on the left for the other foreign dignitaries. In both we have friezes representing the different delegations that constituted the Persian Empire. Each group is identifiable by their attire and by the gifts that they would normally bestow on the king. Gifts that represented the territories where they originated from.

Like these Assyrians and their offering of two rams 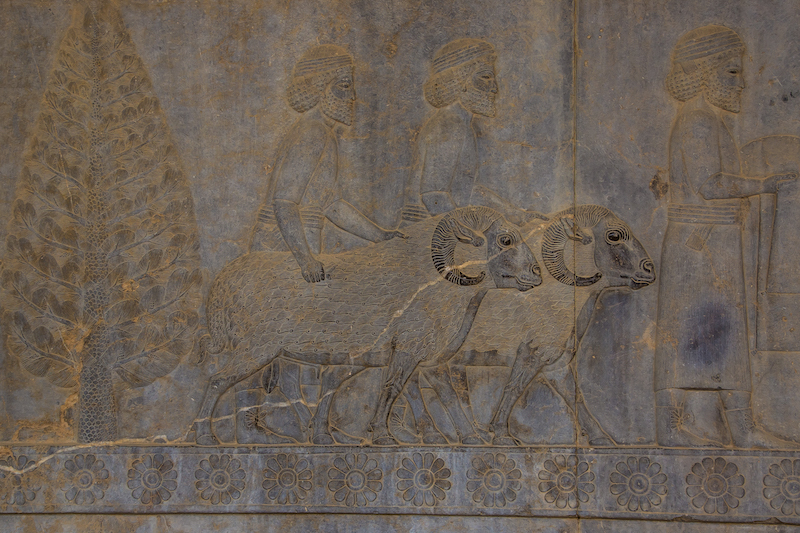 Or the Armenians who always presented their famous wine 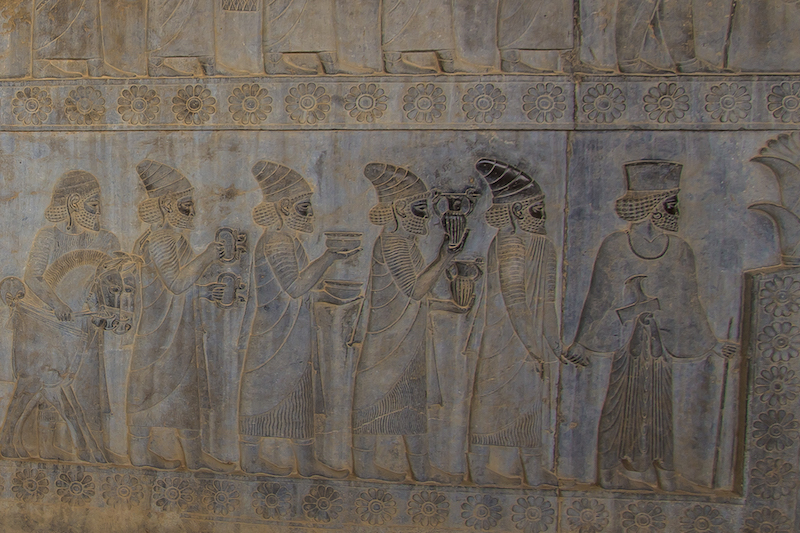 Imagine the procession was about to start. Each delegation had to line up behind an usher that would be in Persian or Median attire. He holds a staff in his left hand that is representative of his official role. In a friendly, affectionate gesture he holds with the right the hand of the leader of the delegation, in order to escort them to the King. Would they be orderly aligned like we are shown? How easy was it to keep the animals in line? Would they talk between themselves while they waited or just keep the dignified silence the occasion may have demanded? 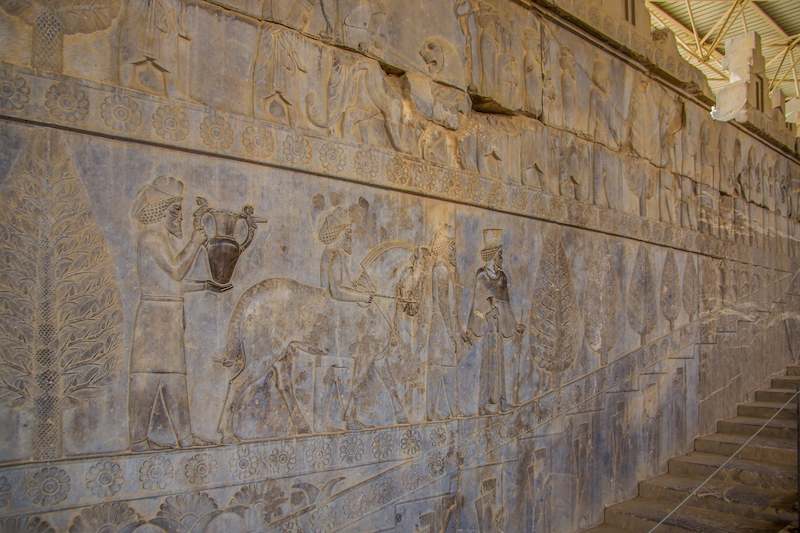 Persian and Median guards (the one in the middle) are widely represented standing in attention as if keeping a watchful eye. 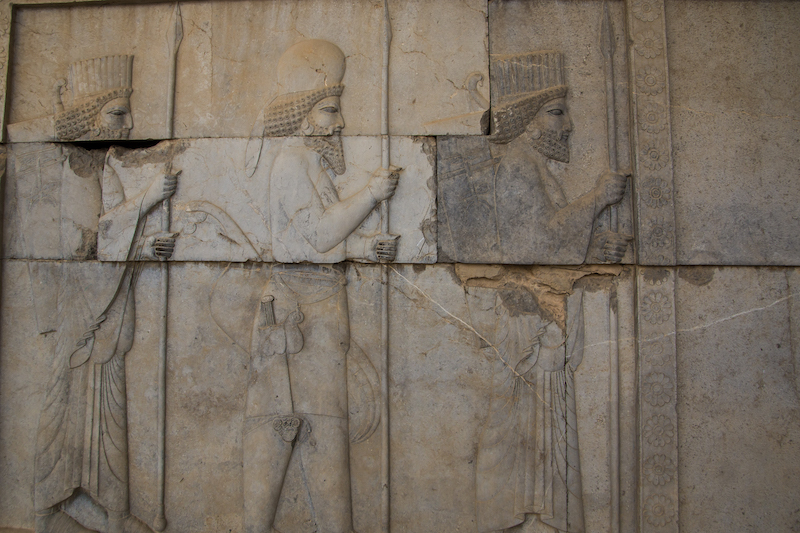 At this point I was actually dreading following in Alexander’s footsteps. I just can’t understand why anybody would want to destroy such beautiful Palaces. The only footsteps of Alexander that I would want to follow, were the ones he did at the beginning. Arriving at Persepolis for the first time, admiring the buildings and the city. Those first impressions.

What followed must have been heartbreaking for the Persians who lived at Persepolis. As a compensation for their war effort, Alexander gave permission to his troops to sack the city with the exception of the palaces which belonged now to him. The troops went to the private residences, massacred all men, took what was valuable and made the women their slaves.

When Alexander went to the treasury, he found it was filled with silver and gold. He decided he was going to take part of it to finance his war efforts and the rest would be kept in Susa, a city which was already under his control. According to several Greek historians the treasure was so big that he sent for 10 thousand pairs of mules and 5 thousands camels to carry everything.

Which brings me to the unfortunate fire. South of the Audition Palace, there was the Tachara Palace. A palace started by Darius I and finished by his son Xerxes I. 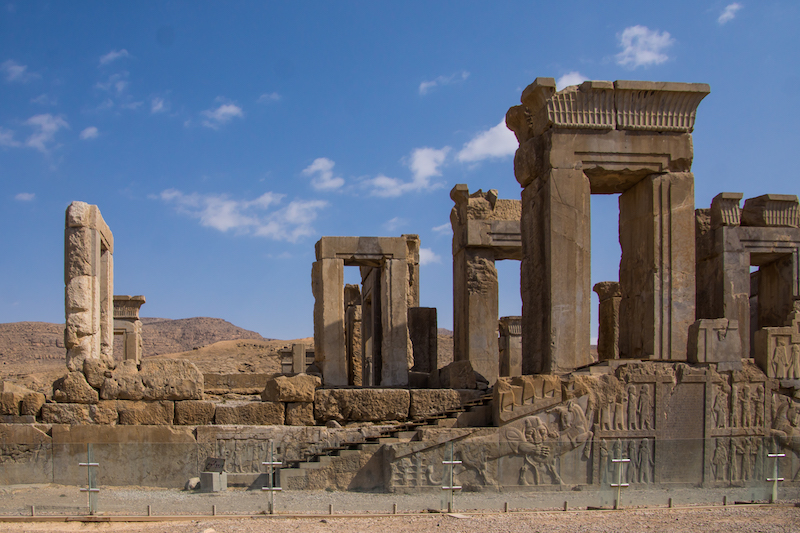 There is a proclamation of Xerxes as the great king on its walls. In this proclamation he mentions his father who came before him and asks God, Ahura Mazda to protect him. The text is repeated on a pillar written in three languages, old Persian, Elamite and Babylonian. 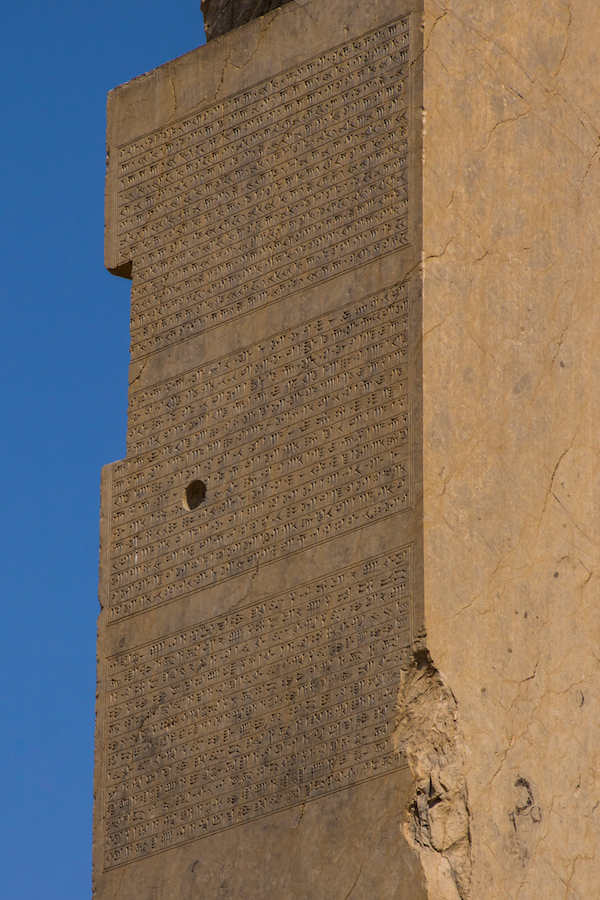 Symbolic is also a carving of Darius slaying a lion, the victory of good over evil. 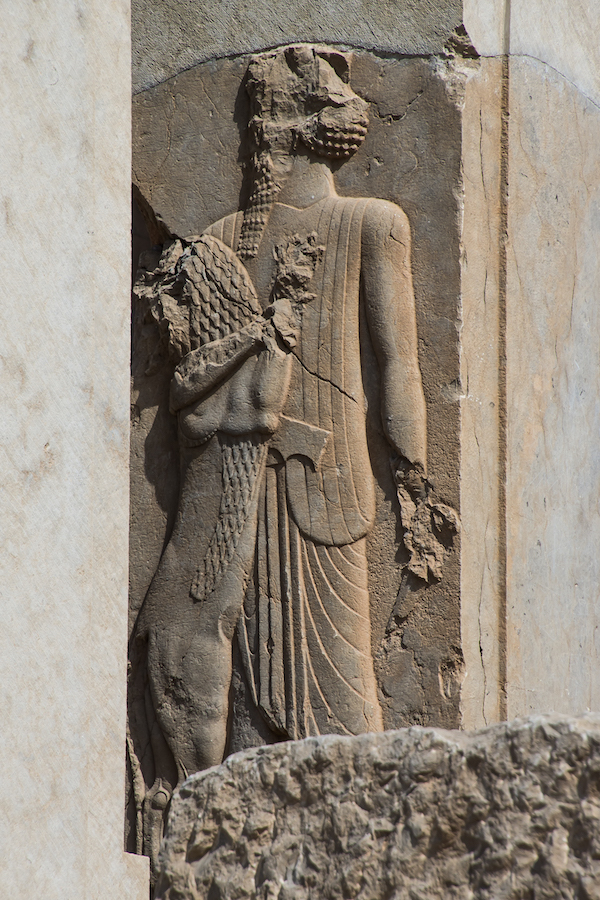 That did not prevent Alexander’s fire from spreading not only to the Tachara but also to the Hadish, the private residence of Xerxes. 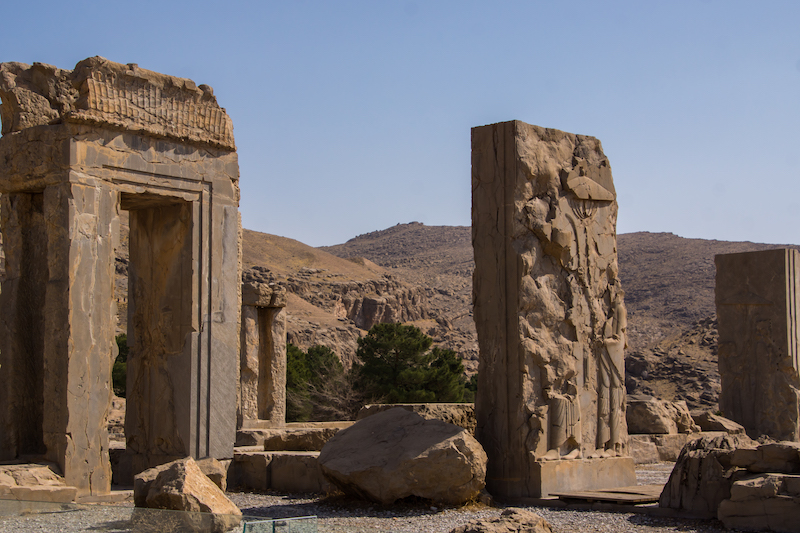 Also to the palaces in the vicinity and to the Hundred column hall. 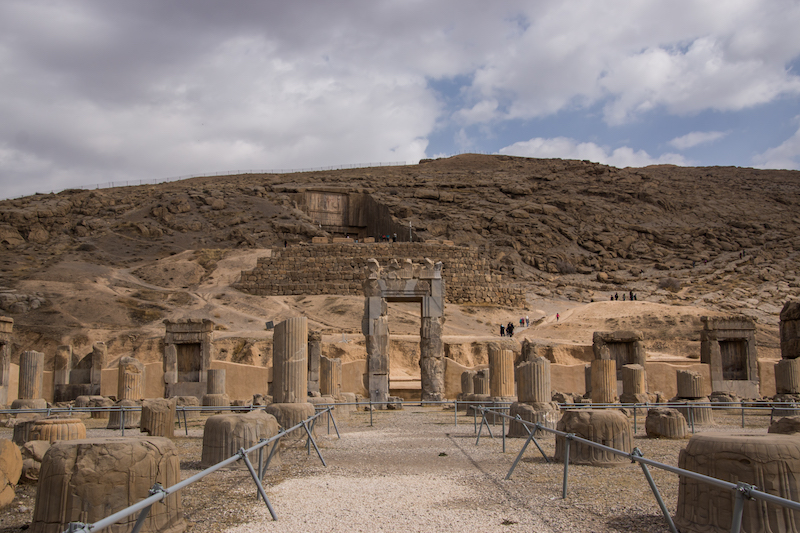 So why set fire to such wonderful buildings? Ancient greek historians differed on the reasons. Some claimed he wanted to take revenge for the burning and razing of the temples in Athen’s acropolis during the Persian wars. Others claimed after a drunken banquet a courtesan named Thais dared the Macedonians to burn down the palaces in Persepolis.

The reason may well have been to humiliate the Persians and show he was now in charge of their Empire. Whatever the reason it seems one of his generals tried to prevent it and advised Alexander against it. He pointed out quite logically, that if he did that, the people of Asia would think that he was only interested in conquering and then moving on. They would be convinced he had no interest in governing Asia.

But he did not listen and went ahead. Later the fire was extinguished but the damage had already be done. In the hilltops nearby there are two tombs one of Artaxerxes II and the other of his son Artaxerxes III. 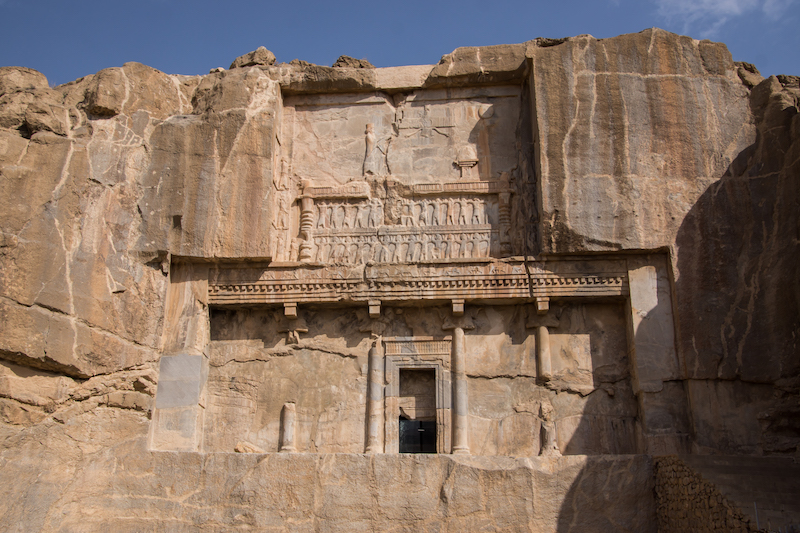 From their tombs, looking down into this wonderful ancient city, particularly at the now empty layout of the Treasury and all the other damage done, I thought about war and the struggles for power. History has repeated itself over and over again. 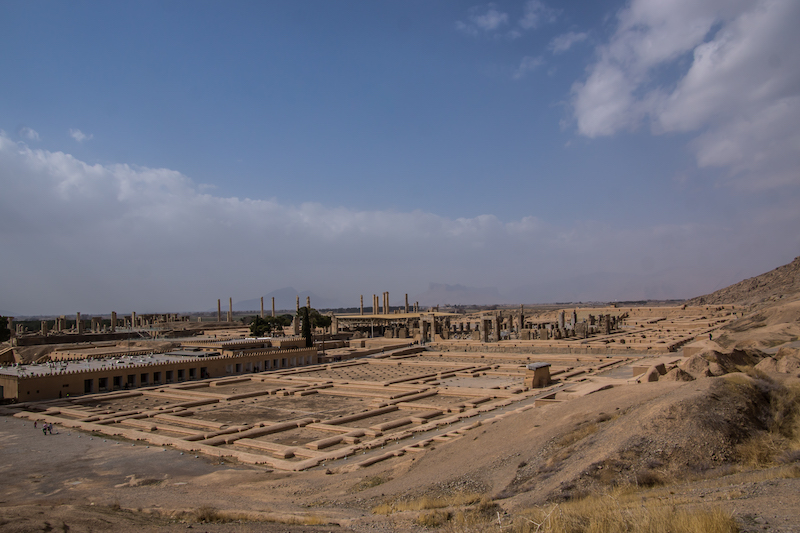 But from the ashes the past has always been able to unravel itself into the present. The footsteps of Alexander and his troops are long gone. Shortly afterwards, in 323 BCE Alexander died in Babylon. He left an Empire, that was later divided among its generals. Was he ever sorry for all the destruction he caused? I don’t think so, that is how you build new empires after all, from the ashes of the old ones.

In spite of Alexander’s fire and the wheels of time, Persepolis is still able to tell us its story. Preserved in stone, you can still admire the foreign delegations lining up to meet the king of kings wearing their regional attires and bearing their best gifts. You can also observe the king sitting in his regal throne surrounded by his son and most trusted officials ready to receive them.

And there is one celebration that has gone beyond these stone remains, Nowruz, the welcoming of the New Year. Nowruz is still the most important celebration in Iran today. For two weeks in Spring, Iranians prepare to welcome the New Year and celebrate new beginnings.

There is much more that could be said about Persepolis, I leave that to the experts. But if you want my advice, come and see for yourself this ancient glorious capital of a long gone Empire. Don’t follow Alexander’s footsteps or even my own. Come, while it is still standing, there are many things to be learned and admired.

I leave you with two very important symbols that Alexander and his men could not destroy. One is the lion attacking the bull, which is repeated throughout Persepolis convincing some experts that it was a sort of coat of arms of the Achaemenid Empire. Others believe that it has to do with astrology and the beginning of Spring marking Nowruz and the Persian New year. 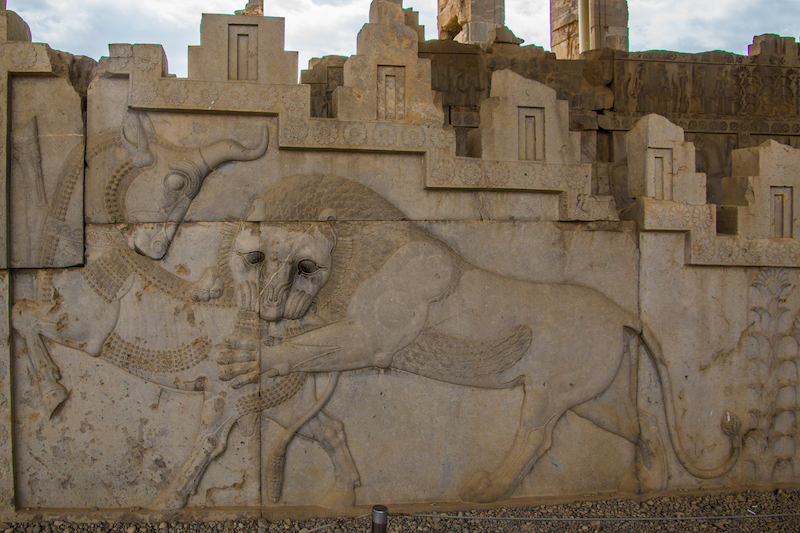 And the other, appropriately is the symbol of the Royal Glory for some and for others the Faravahar, the spiritual Zoroastrian symbol. Both meanings will always be part of the history of Persepolis. 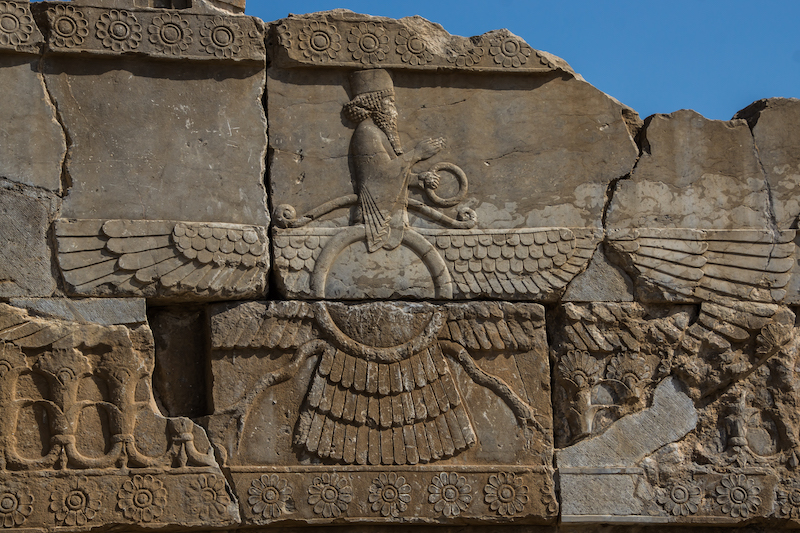 Next we will be looking at the Royals last resting place …