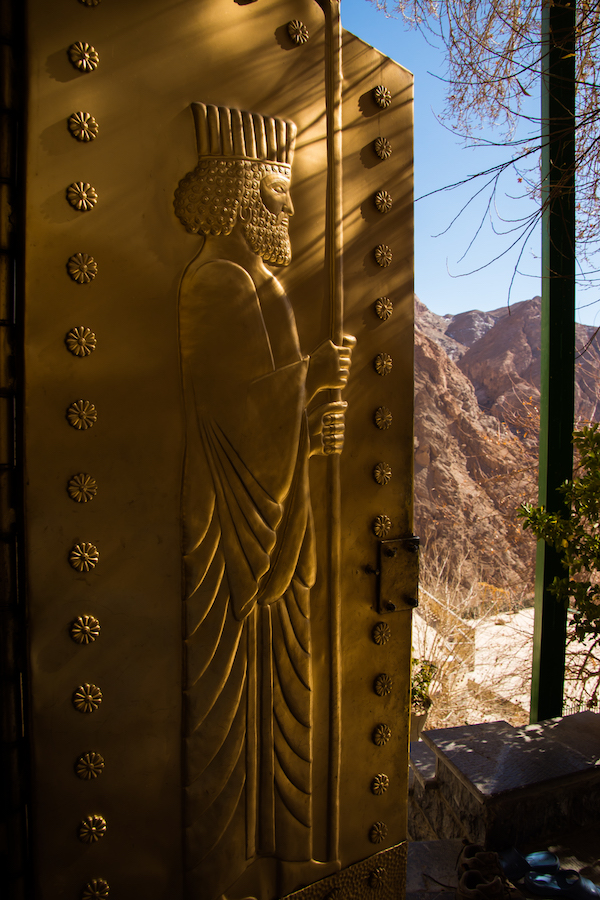 The scenery was stunning with mountain ranges and little vegetation. The harsh environment made you wonder why such a place was chosen for a sacred temple. 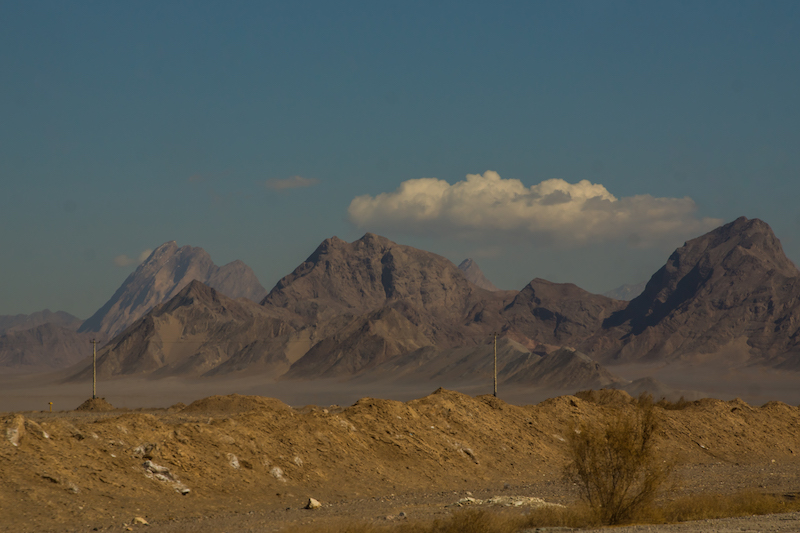 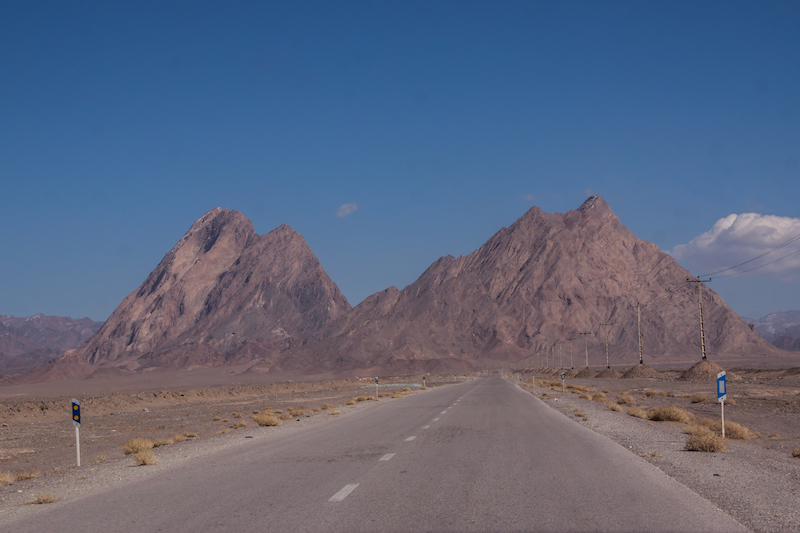 To understand why, we need to go back about 3500 years, when Zoroastrianism was established as a new religion. A new religion which brought a big change.

From the worship of a multitude of Gods to the worship of a monotheistic God. A spiritual, invisible God, Ahura Mazda, who embodied all wisdom. A god who had created the universe to defeat evil. Zoroastrians believe there is a negative force or evil spirit that needs to be defeated. By seeking the truth and righteous path, you can defeat evil. Each individual can make his own destiny by choosing a good or evil path. At the end of time you will be judged and will either go to paradise or to hell.

When Zarathustra or Zoroaster, the prophet who had come from a family of priests, introduced the new religion, he was met with great resistance, in particular from the class of the Magi, the priesthood. Some concepts were regarded as dangerous. In particular the one that stated mankind was all equal and that at the day of judgement rich and poor would be judged equally .

These are principles we can all relate to in our faiths. As one of the oldest monotheistic religion, historians believe Zoroastrianism has greatly influenced the three major monotheistic faiths, Judaism, Christianity and Islam.

We don’t know exactly when Zoroastrianism was adopted as a state religion. We do know that by the time of the Persian Achaemenid empire, with Cyrus the Great (600 -530 BC), Ahura Mazda was already mentioned as the one true God. Zoroastrianism remained the official religion until the 7th century when the Arab invaders introduced Islam to Persia.

Which brings me back to the sanctuary. Legend says that a Sassanid princess, daughter of the last pre-islamic ruler Yazdgerd III had gone into this arid hills trying to escape the arab army that approached. As they were getting closer, she started to cry and begged Ahura Mazda for help. Suddenly a gap opened in the mountains and she disappeared into it. The army left confused and from that moment on water started to drip from the mountains symbolizing her tears. Water that continuously quenched the thirst of those who passed by.

One day a shepherd who had lost his flock and couldn’t find it, came by to quench his thirst and being very tired, fell asleep. He dreamt that his flock were with a woman who told him to build a shelter there and tell others to come. When he woke up his flock was back. Grateful and with the help of the Zoroastrians he built this sacred fire temple.

I’m not going to lie to you and say it is easy to climb all those steps from the bottom of the mountain to the sanctuary. 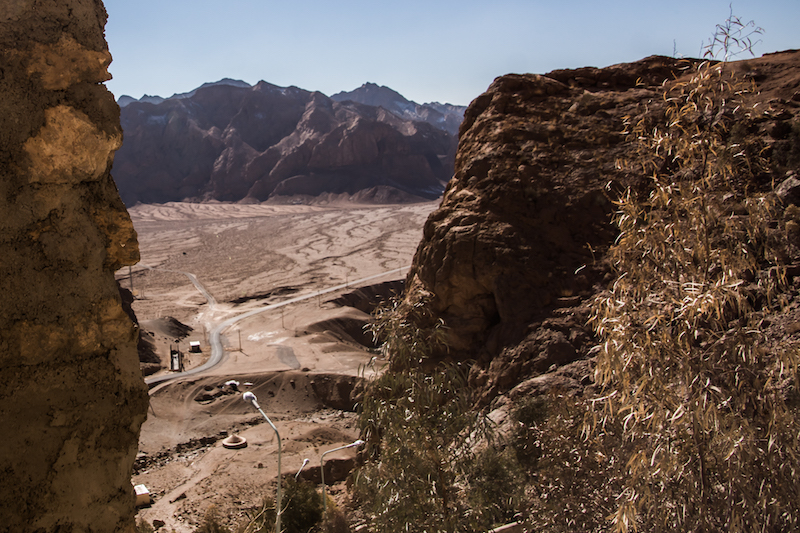 But it is well worth the climb to see this very special Zoroastrian fire temple. There has been a lot of misunderstanding about fire temples and their meaning. Some going as far as labelling Zoroastrians as fire worshippers which is incorrect. Fire for the Zoroastrians is a symbol of purification like holy water or the cross are symbols associated with Christians. It represents God’s light or wisdom so they always pray towards the fire or light.

Every year in June, thousands of Zoroastrians come here to perform their annual pilgrimage not only from different provinces in Iran but also from other places in the world.

The moment pilgrims get the first glimpse of the shrine, they are supposed to abandon their vehicles and walk the rest of the way. I wish I could witness the pilgrimage one day but outsiders are not always allowed to be present.

Before we passed the threshold, we took off our shoes and wore white slippers, that were offered at the entrance. The Fire temple is just beautiful. An impressive cave where the miraculous dripping water still flows in the natural rock formations. There is also the permanent fire that symbolizes purification, the three symbolic candles and the ones that some pilgrims light when they come for prayers. There was a spiritual, peaceful atmosphere with the fresh breeze that entered the temple and the sound of the water dripping. 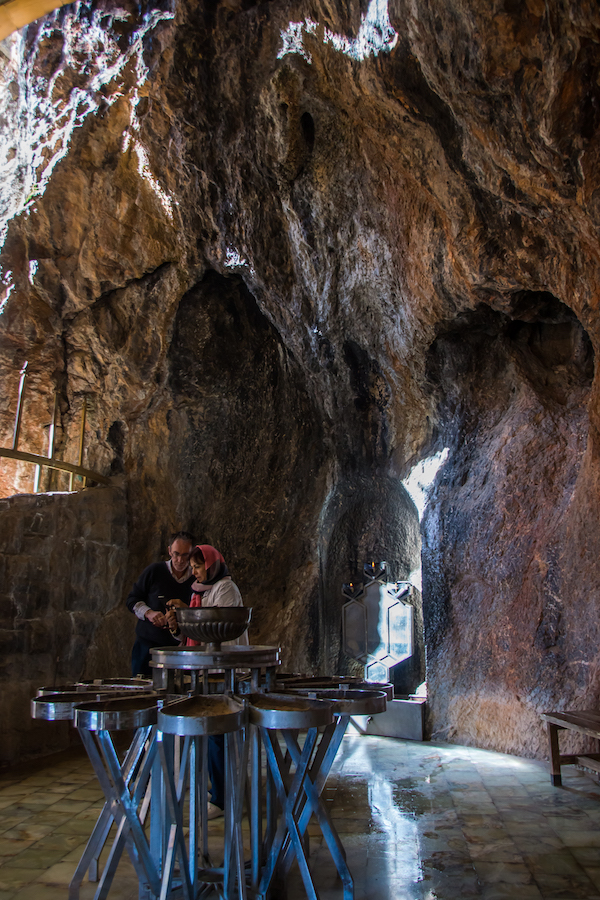 Looking at the mountainous landscape and at an image of the prophet Zoroaster, suddenly I hear what sounded like a prayer. 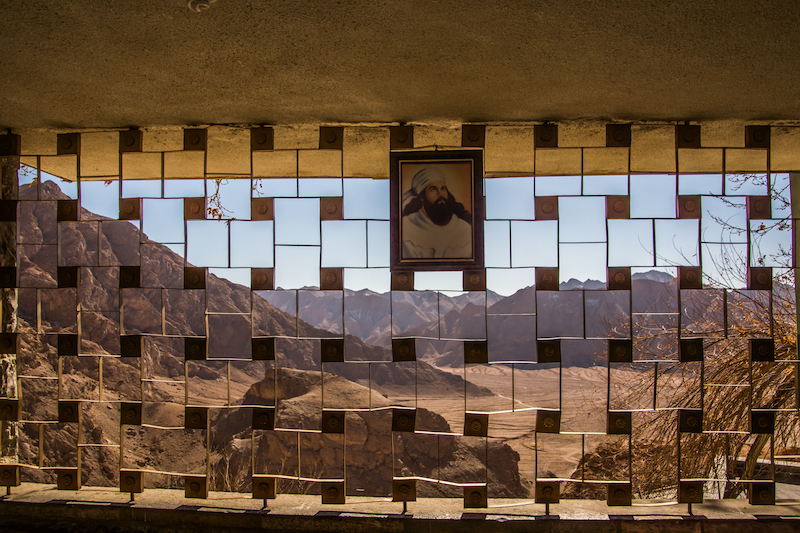 A Zoroastrian was reciting a prayer, probably from the Avesta, the sacred books of  Zoroastrianism. We listened quietly, grateful we could witness it.

Before leaving I stole one last glance at the central fire altar and the tree candles at the back symbolizing good thoughts, good words and good deeds. 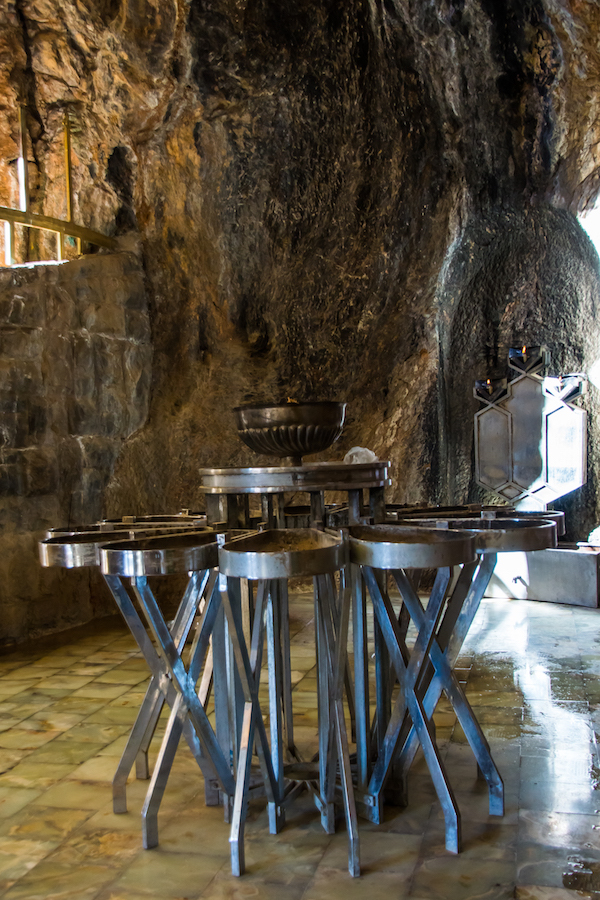 It was time to seek another sacred fire, the “highest grade fire” in Iran. The Atash Behram or Atash Kadeh as it is also known, was built in 1934 but it encloses a sacred fire said to date from 1500 years ago. The fire has been moved several times throughout the centuries but has now been permanently consecrated in the Atash Behram. 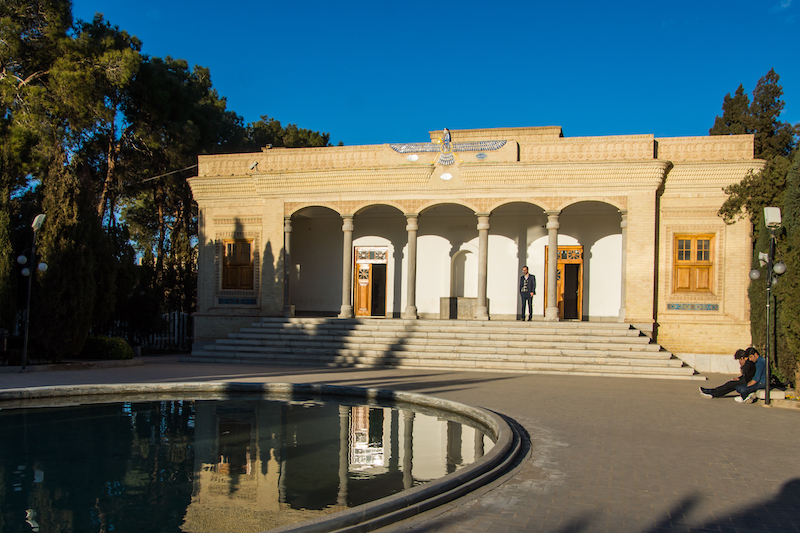 Above the entrance to the temple you can see the Faravahar, the most known nationalistic and Zoroastrian symbol in Iran. The three inscriptions around the symbol represent the same principles I had mentioned in the previous temple : good thoughts, good words and good deeds. 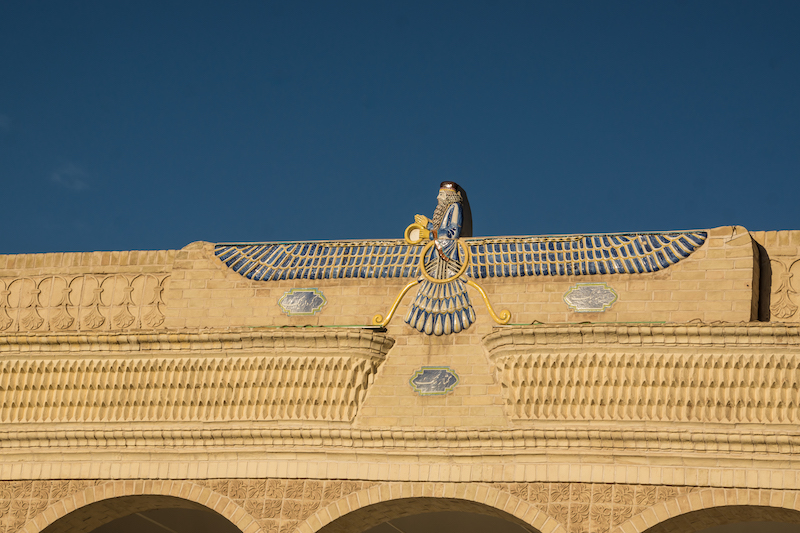 The sacred fire is looked after by priests. In order to maintain the purity of the fire the priests use face masks so that their breathing and saliva do not contaminate the fire. This is also why the fire is kept locked inside a room and the only way to see it is through glass. Due to the light that comes from the exterior and the reflection of the glass, it is hard to take a proper picture as my silhouette shows. 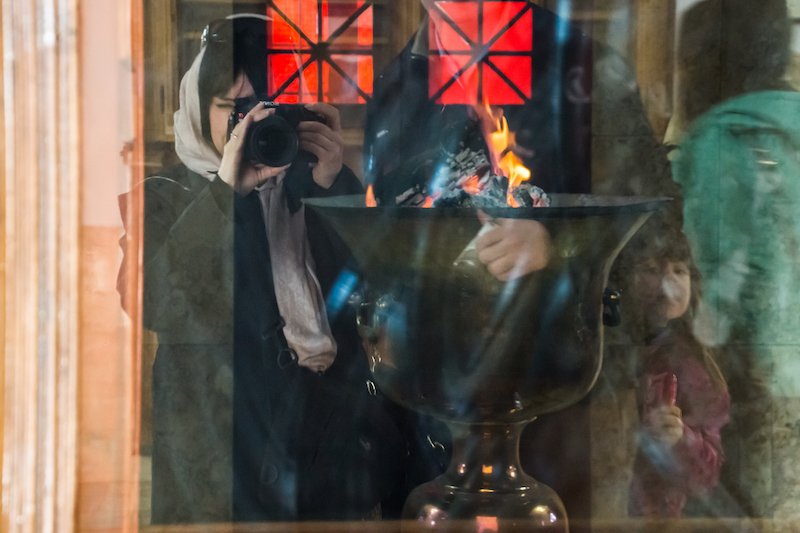 On the walls, besides an image of the prophet, there are several verses from the sacred books. 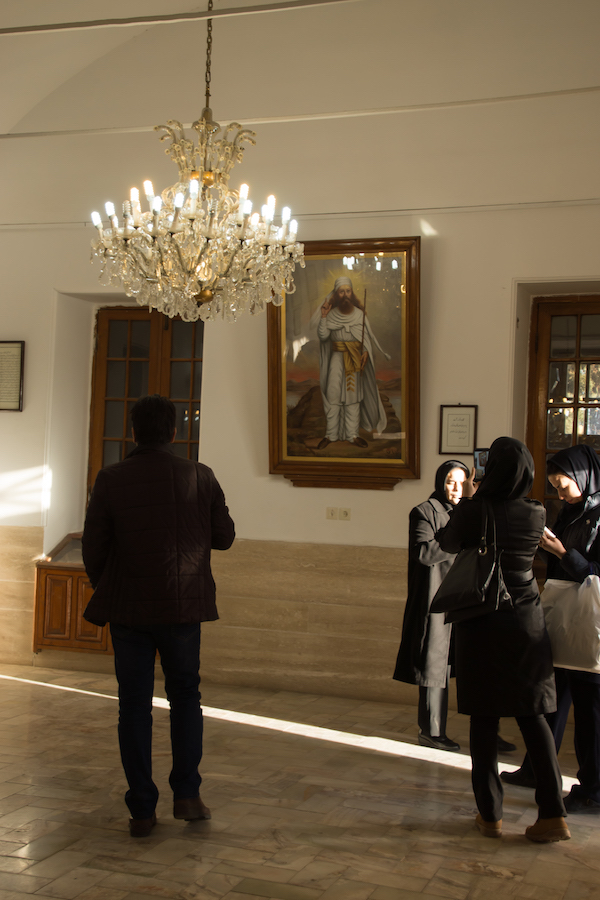 These wise words from the prophet show the freedom to choose your own path: 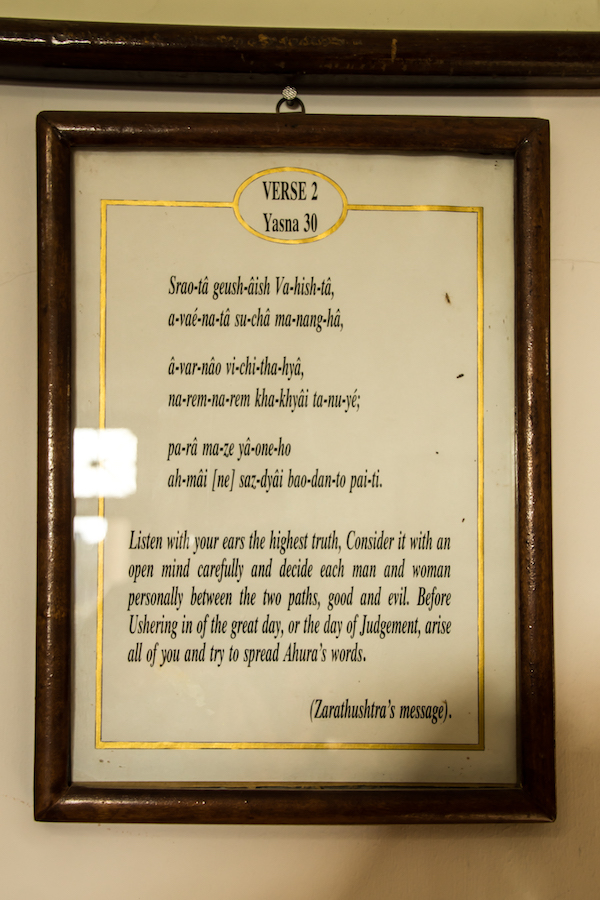 In a building next door, there is also a small museum that teaches you more about the Zoroastrian faith, their rituals, beliefs, sacred books and festivals. 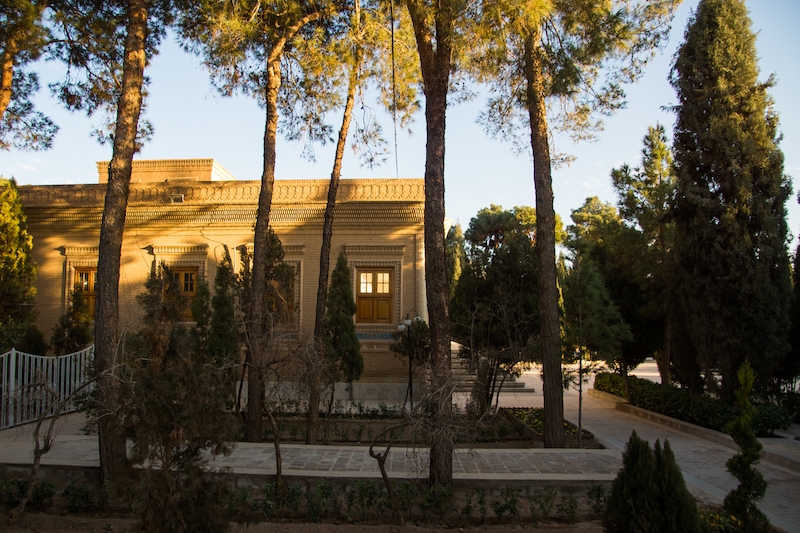 We had decided to keep the rituals of death for last as it should be. Approaching the impressive Towers of Silence I couldn’t help thinking about all those loved ones who were no more and had been ritually disposed of by nature. 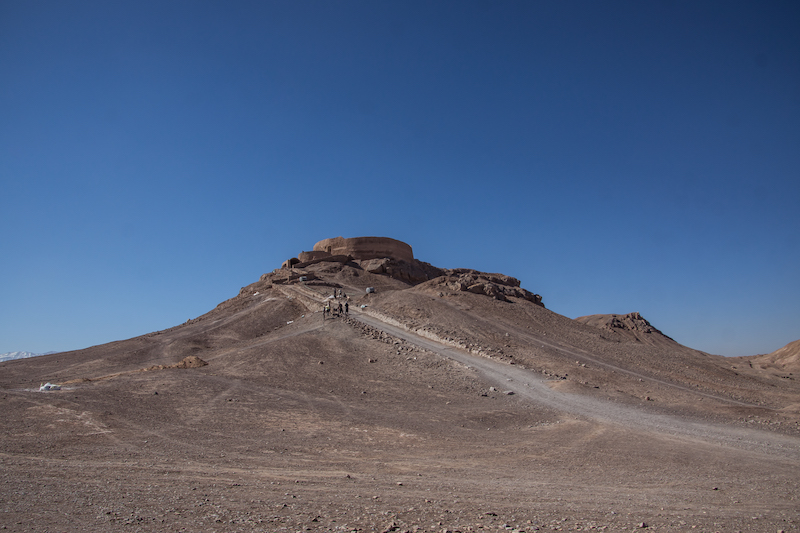 You see for Zoroastrians, when someone dies, the spirit leaves the body after three days. The spirit will live on but the body becomes just a capsule that needs to be disposed of. The body should not pollute the earth or the water. After the family said their goodbyes the body was prepared. It was then placed in an iron bed and taken to the top of the tower by men who left it in a pit open to the elements and vultures. After the body was gone the bones were buried in metal boxes so that they would not pollute the soil. 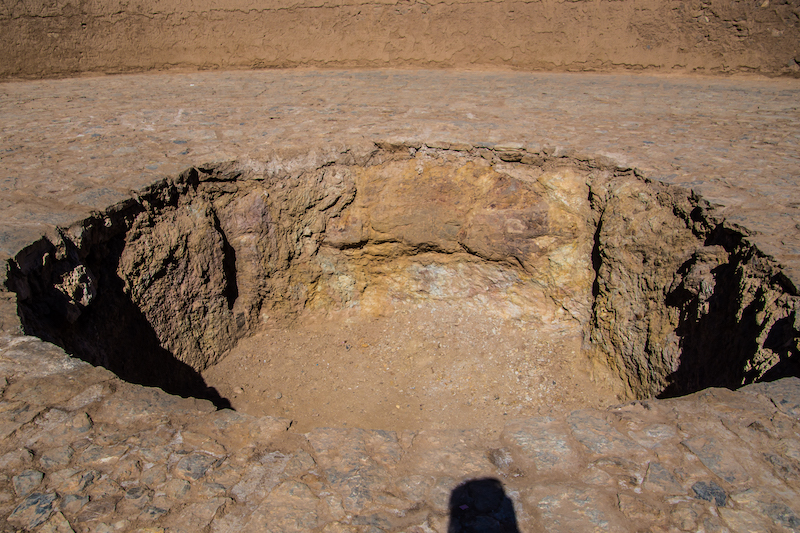 Nobody was allowed in the towers except for the men who were performing the rituals. There were two towers of silence and this one was just being restored. From the tower you have a view of the buildings below. There is not so much silence due to the proximity of the city now, but the heat, the climb and the view of the pit put me in a somber mood. 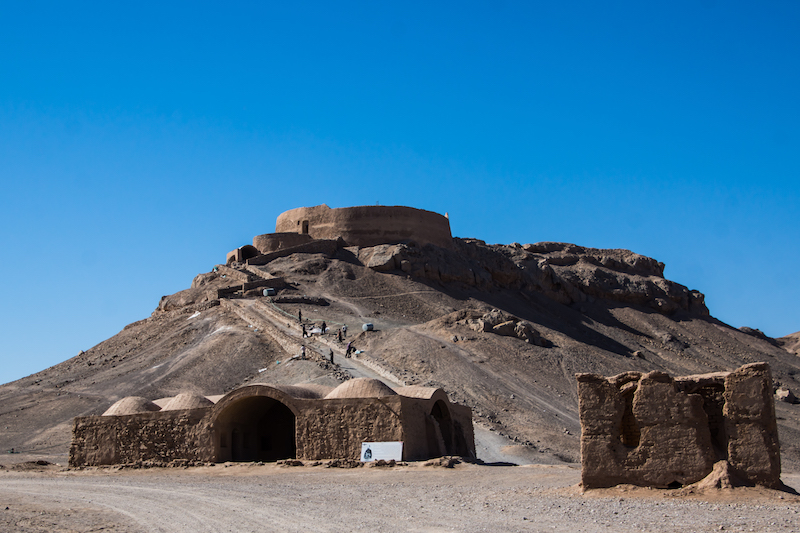 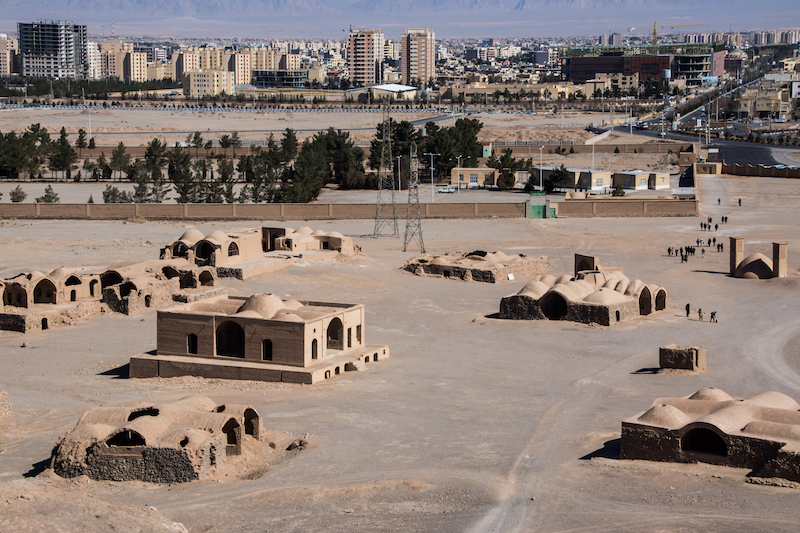 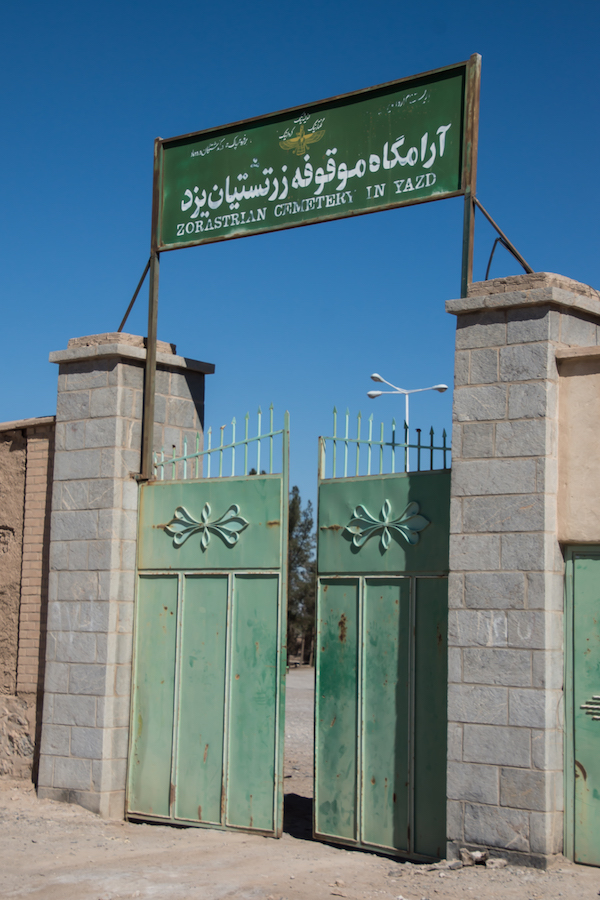 In spite of this restriction, Zorastrians are a respected community free to practice their faith as they see fit in Iran. The Zoroastrian community in Yazd used to be one of the biggest in Iran. Numbers have decreased a bit as some families moved to other places. At this moment they make about 5 to 10% of  the Yazd population.

As we bid farewell to the towers of silence, I felt happy we got to learn more about one of the oldest monotheistic faiths still thriving today. Its principle of free will in choosing your own future and the assurance that by choosing the good path, you can defeat evil is very positive and optimistic. Something we need more of in this complicated and at times violent world we live in.