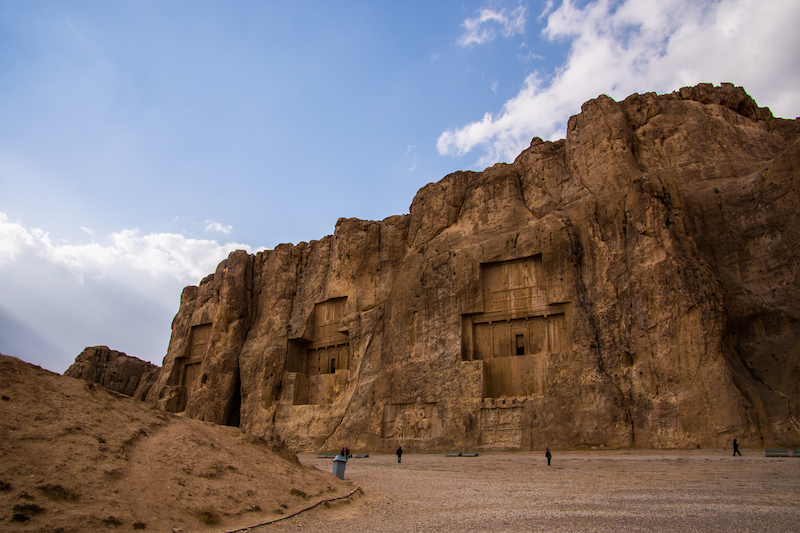 It was time to bid farewell to Persepolis and head to Naqsh-e Rustam. At Persepolis we had had a glimpse of how life was conducted under the great Achaemenid Empire (500 – 330 BCE). Now it was time to visit the majestic tombs and last resting place of its kings.

All day, there had been threats of a storm around the ancient city. Now that we were driving away, a strong wind was rising. Soon a cloud of dust surrounded the beautiful background hills making them look ghost like. 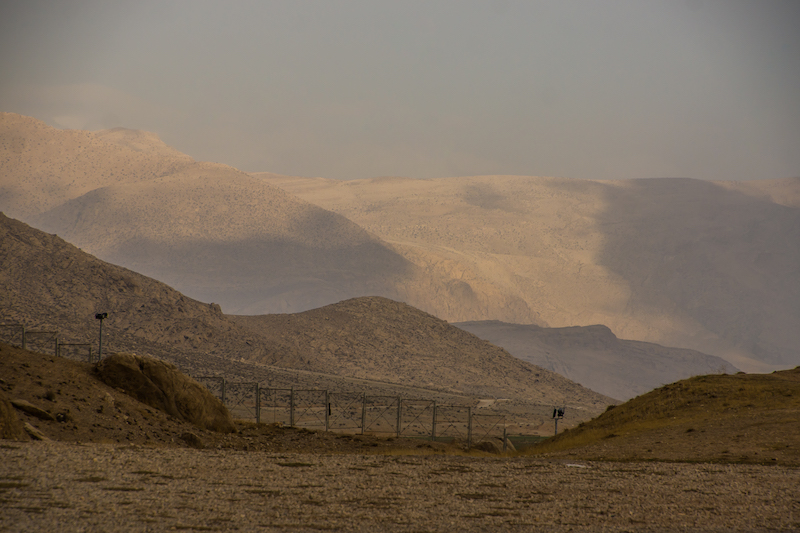 But then, when we arrived at Naqsh-e Rustam, there was blue sky again. Warm earthy colors popped out of the majestic rock tombs. I hadn’t known what to expect but here they were. The most impressive tombs I’ve seen. And what a sight. Carved out of the natural rock, high above the ground, there they stand as the last testimony of Darius the Great, Xerxes, Artaxerxes I and Darius II.

It was Darius the Great who chose Naqsh-e Rustam as his last resting place. His tomb is the only one which can be identified by its accompanying inscription that names the different nations under his Empire. 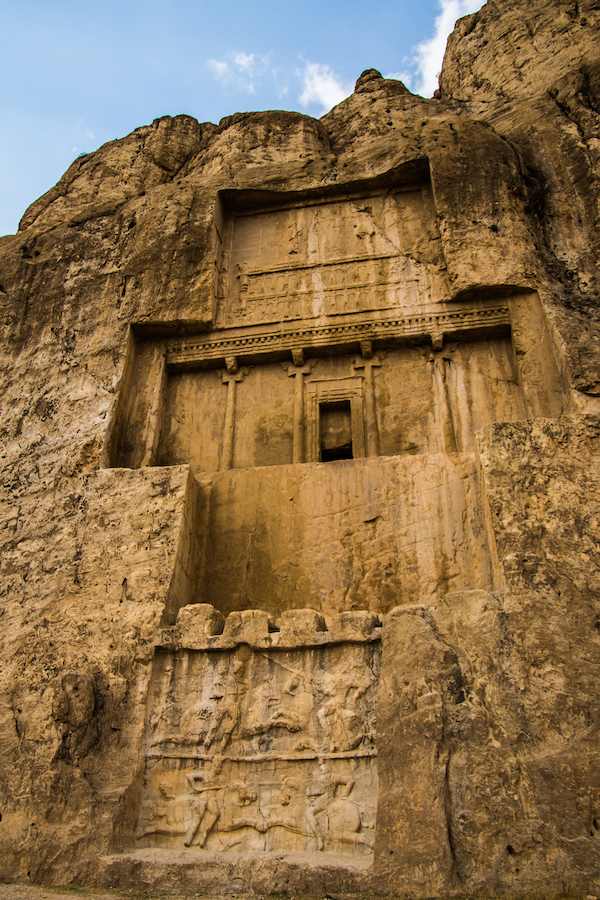 As you approach, you can see how both Darius’ spiritual side and his more worldly role are clearly illustrated. His spiritual side as a worshiper and representative on earth of the one God Ahura Mazda. His worldly side as the king of a vast Empire.

In the upper part of the rock carving, we can see on the left side the king standing in a three step platform. His right hand is raised in prayer before a fire altar standing also on a three stepped base. Above the king in the right corner we can see the representation of the full moon with a crescent moon within. By night Zoroastrians could pray towards the light of the fire or the light of the moon. Above in between the king and the sacred fire is a symbol that looks like the Faravahar, the Zoroastrian symbol. 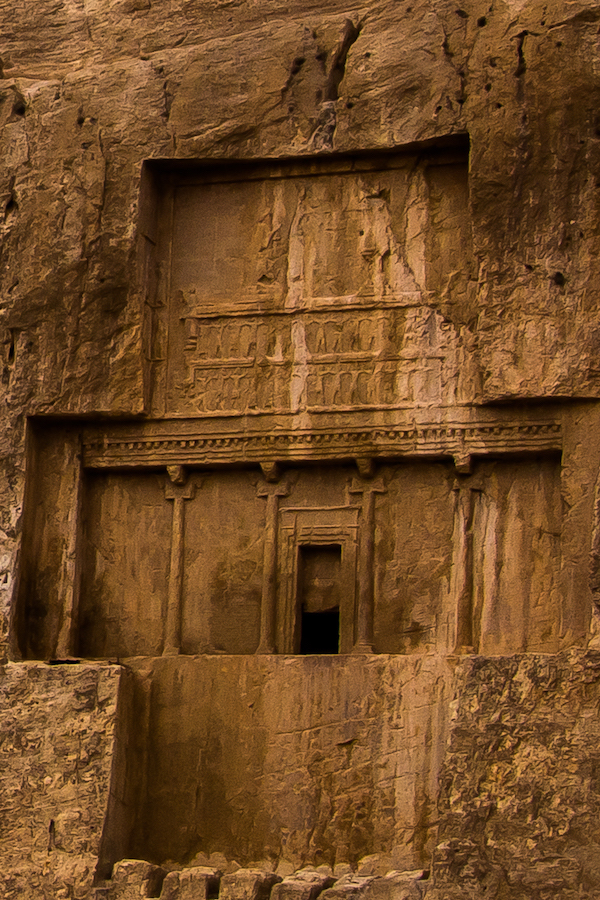 On both sides of the carving, there are panels where we can see three figures, standing one above the other on each side. These are supposed to represent the nobles that helped Darius to gain the throne. Symbolically, this could be associated with the Amesha Spentas, the six divine beings or archangels created by Ahura Mazda. The three nobles on the right hand side not shown, are all raising their left hands towards the mouth in a sign of mourning. The hands are covered by their sleeves, a gesture that is still used today by Zoroastrian priests when performing mourning rituals.

Holding the bigger platform where the king is praying towards the sacred fire are the 30 representatives of the nations that were part of the Achaemenid empire.

Below, the entrance of the tomb is part of a relief representing the palace of Darius at Persepolis.

It seems obvious that there is a connection to the Zoroastrian faith in the tomb of Darius. In Persepolis and in other places, Darius affirms his devotion to Ahura Mazda. He often calls him the creator of the world, men and responsible for making him king. There are (mainly western) historians who believe Darius was basically monotheistic and a devoted believer in the one God Ahura Mazda.

Iranian historians seem to disagree with this assumption. They point out, that during the Achaemenid empire, other Gods were worshiped so saying that Zoroastrianism was the only faith would be wrong.

Another point is the one of the burial. As we know Zoroastrians exposed the dead bodies to the elements and to the vultures in towers of silence. This was made so that the dead bodies did not pollute the soil and the water. Persian kings were instead embalmed and buried in tombs.

They also disagree about the Faravahar, the Zoroastrian symbol. They say the ones found at Persepolis and here represent the Royal glory instead.

Western historians counter, that there were indeed other gods worshiped during the Achaemenid Empire. But this was part of the policy implemented by Darius following the initial strategy of Cyrus the Great, founder of the Achaemenid Empire. Cyrus had allowed freedom of worship among the nations of the Persian Empire. This kept the different nations happy and made the Empire strong and united. When Darius came to power his main objective was to restore and consolidate the Empire.

As for the burial practices they say, that although the Persian kings were not following the usual Zoroastrian practices, the fact that they were embalmed and then placed in tombs high above the ground was their alternative to these practices.

Looking at the other tombs of Naqsh-e Rustam, it is obvious that the descendants of Darius used faithfully the same symbols and representations in their tombs. We can see it clearly here in the tomb of his son Xerxes but also in the other tombs. 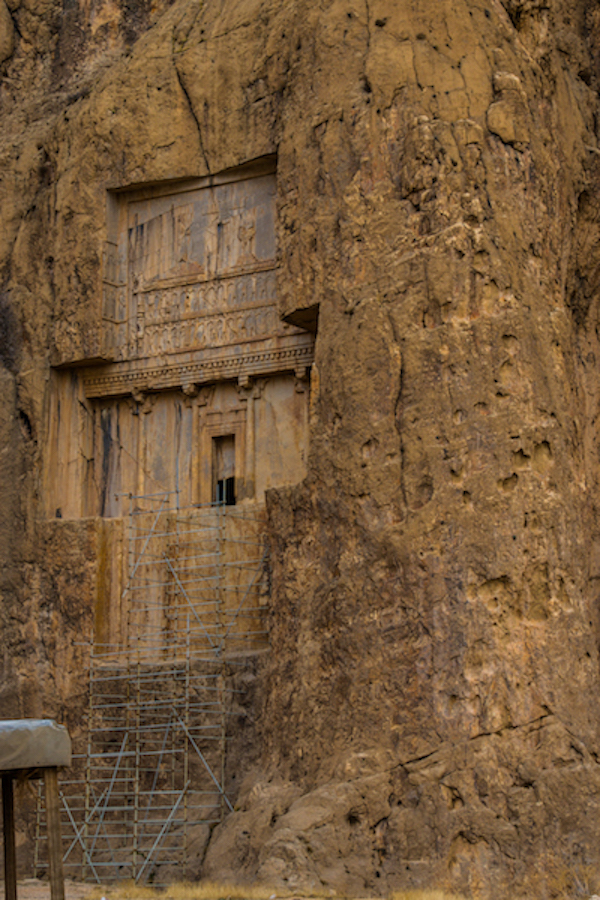 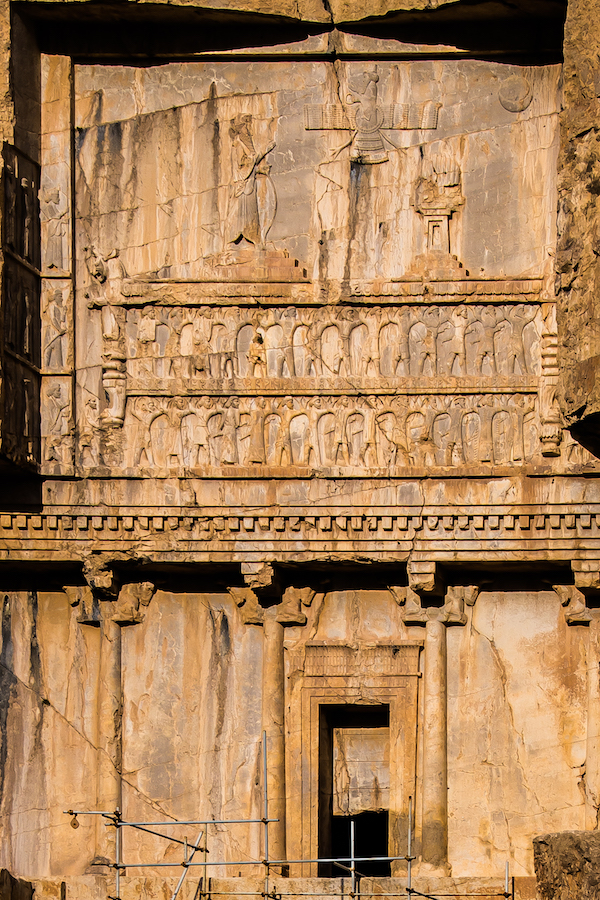 Facing the kings tombs, there is a strangely shaped building which is known as the “Ka’abah of Zoroaster” (after the cube shaped sacred Ka’abah in Mecca). 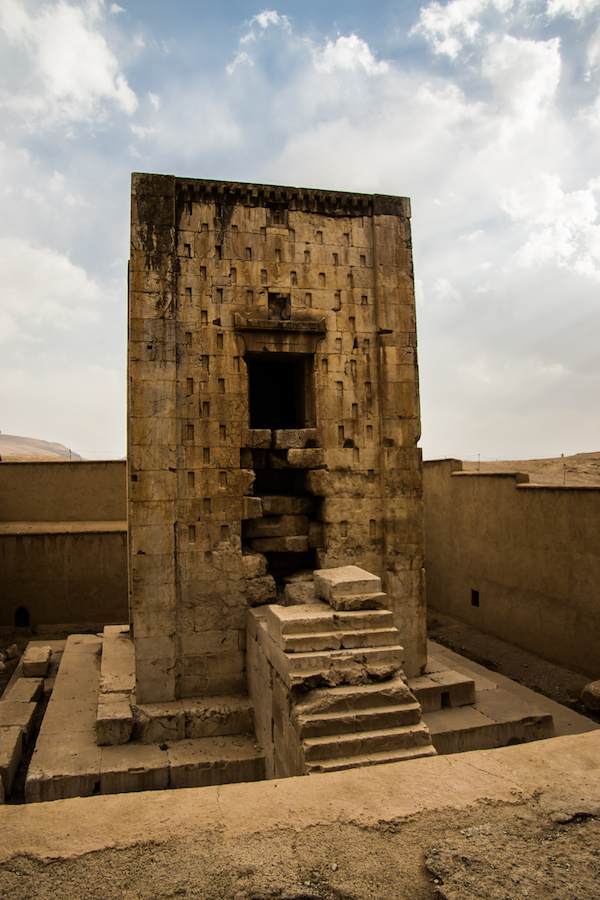 The structure was built during the Achaemenid Empire and it stands on the usual three stepped base. Inside there is a windless room and the only entrance seems to be through a very narrow door. Again there is controversy about its use. Its proximity to the tombs of the kings seems to indicate that it was a Zoroastrian temple where ceremonies would be performed and yearly celebrations held. Others believe it was a place to keep the ossuaries of other members of the royal family.

What we do know, is that it had a revival under the Sassanids who ruled from the 3rd century AD. After the Macedonian and then the Parthian rule, the Sassanid kings were determined to revive the Empire and be associated with the great Achaemenid dynasty.

That is why we find later carved panels at the foot of the Achaemenids king’s tombs. They show the victories and achievements of the Sassanid kings and also evidence of the revival of Zoroastrianism as the official religion of the empire. There are royal and priestly inscriptions at the Ka’abah of Zoroaster from this period as well.

On the lower left side of Darius tomb, we find an important Sassanid Royal relief. It shows the Persian king Shapur I on horseback. He is holding by the wrist the Roman emperor Valerian defeated by Shapur I at the battle of Edessa in 260 AD. He later died in captivity. The kneeling figure is another Roman emperor, Philip the Arab, surrendering to the Persian king with whom he had to negotiate peace and the ransom for the return of his captured legionary troops.

Not so visible behind the king is another figure. By his garments and posture we understand he was a Zoroastrian priest. His hat, his beaded rope around his neck, his right hand lifted in prayer are all signs. It was Kartir or Kerder, the chief Zoroastrian priest. 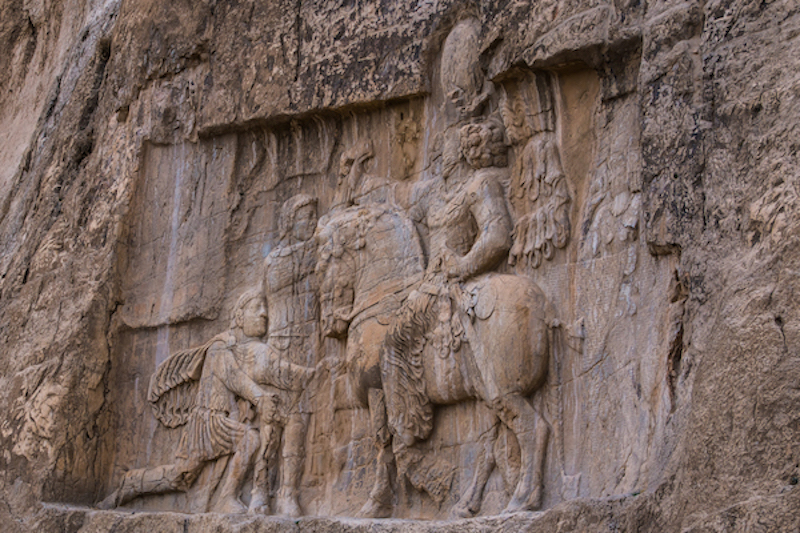 He claimed to have restored the faith and became the Zoroastrian chief priest during the reign of three Sassanid kings. Alexander the Great had been accused of destroying Zoroastrian temples and of having killed many of its priests. During the Macedonian rule that followed, the Greek gods were introduced and Zoroastrianism went through its darkest period. Now it was time for the revival and the Zoroastrian priesthood became a very powerful force under the Sassanids.

There is much more to discover and I urge you to explore this amazing site by yourself. The simple burial chambers cannot be visited and lie empty now, having been desecrated after the arrival of Alexander the Great. No more a resting place for glorious kings but still a testimony of their glorious past. The desire to be associated with the greatness of those who came before can still be seen in today’s world. It does not necessarily make those who wish for it Great. But it does help keep the memories of those who are long gone alive.