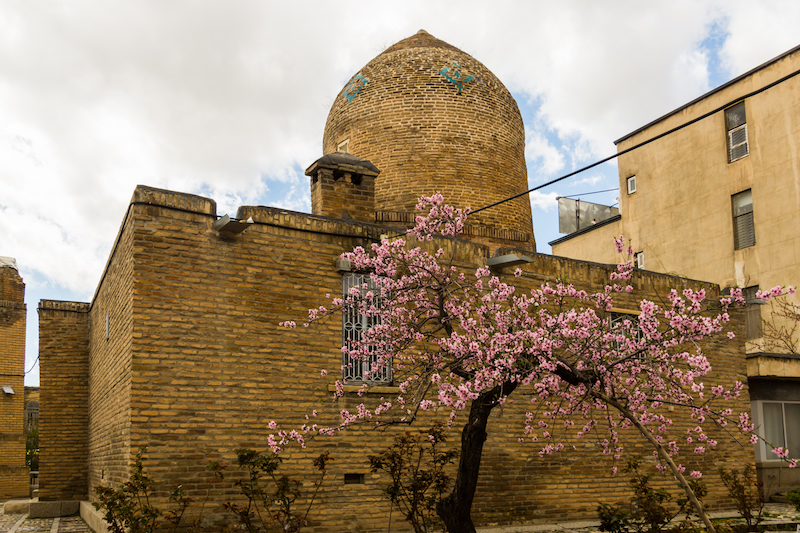 In search of Esther and Mordecai In Hamadan

Here we were in search of the biblical Esther and Mordecai. The instructions to get there were a bit confusing. Even the GPS seemed lost. We got out of the car in a very busy street. We looked around but saw nothing. Could we be wrong, we wondered.

The streets were crowded, lots of people seemed to go in one direction. I looked ahead and understood why. There seemed to be a kind of bazar nearby and we had arrived during the morning shopping rush.

Many people looked at us, curious. There was a mother with a teenage daughter ahead. They kept looking back at us and my daughter smiling. The daughter seemed to be teaching the mother some words in English. Then, hesitating, the mother said welcome and then pointing to my daughter said, very beautiful! We smiled back and thanked them. It is nice how Iranians always try to make us feel welcome.

We kept looking, but saw nothing that could resemble the last resting place of Esther and Mordecai. We almost turned back as we didn’t really know how it looked like. But suddenly, there it was. The only building that looked from another era and out of place among such modern buildings.

There is not a consensus about when the building was erected. Some say it dates from the 17th century, other’s that the cupola was built in the 14th century during the Mongol period. There is also the view, that the rectangular base of the building and its stone entrance door could have been built during the Achaemenid empire in 5th Century BCE. Tradition says it was the Jewish wife of Sassanid king Yazdegerd I ( 399-421 CE) who ordered it built.

I always loved the stories of the Old Testament as a child. In particular those related to long lost kingdoms, empires, kings, queens princes and princesses.
But one thing is to read and dream about those places and another thing is to find out that you can actually visit the tombs of two main characters of a story that was one of my favorite. Esther, the Jewish Persian queen, who through her courage and resilience saved both her people and her cousin Mordecai from total destruction.

When we got to the entrance, we were received by two people that looked at us with curiosity. Once one of Iran’s most visited Jewish pilgrimage sites, it does not get many visitors now. They were probably wondering who we were.

One of the guardians asked us and about our religion. Then he smiled and said we were welcome to visit the tombs. He introduced himself as the former Jewish rabbi.

When we got to the door we noticed how small it was. He explained that it is meant that way so that you bend while entering as a sign of respect. 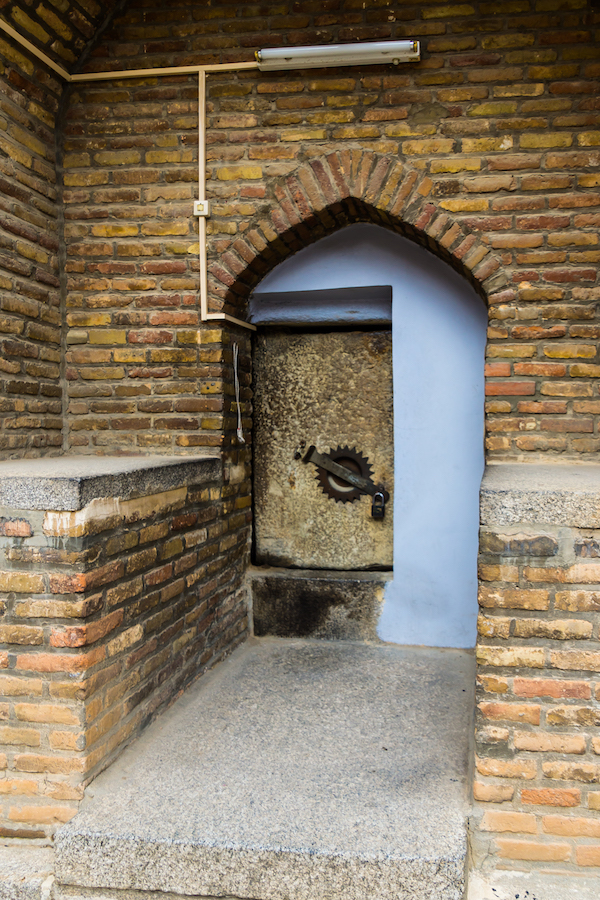 We took off our shoes and entered the first room that had Hebrew and Farsi writings on the wall. He told us this was the former synagogue which is no longer in use. He explained that there are only 15 jews left in Hamadan some of them children. Many left to other cities and also abroad. There just aren’t enough people to pray in a synagogue. In Judaism you need a minyan, a quorum of 10 adults to hold certain celebrations and prayers in a synagogue. And in more conservative branches only men count as a quorum. 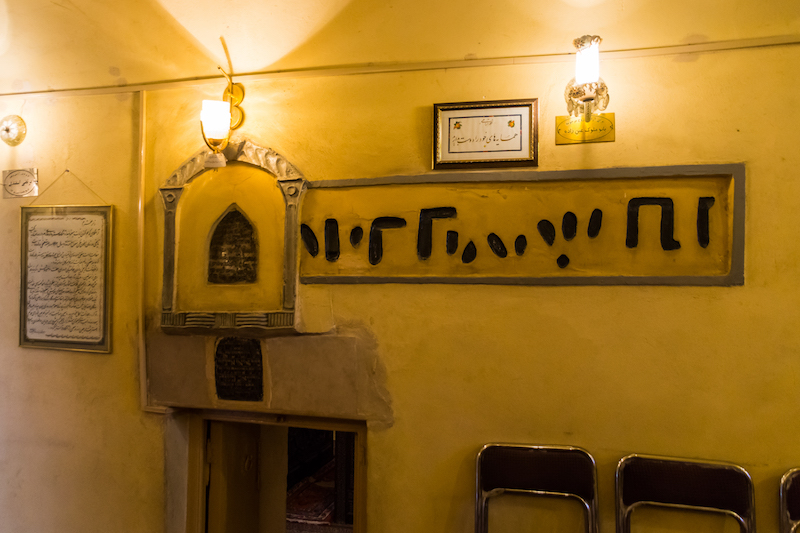 It was time to see the tombs of Esther and Mordecai. Rabbi Rajad let us take our time, pointing out the very old intricate fine woodwork in the tombs, something very unique and special. 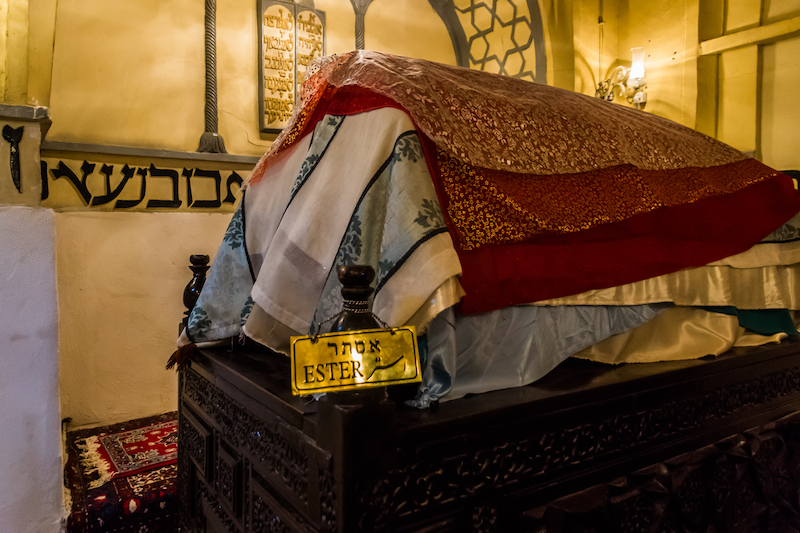 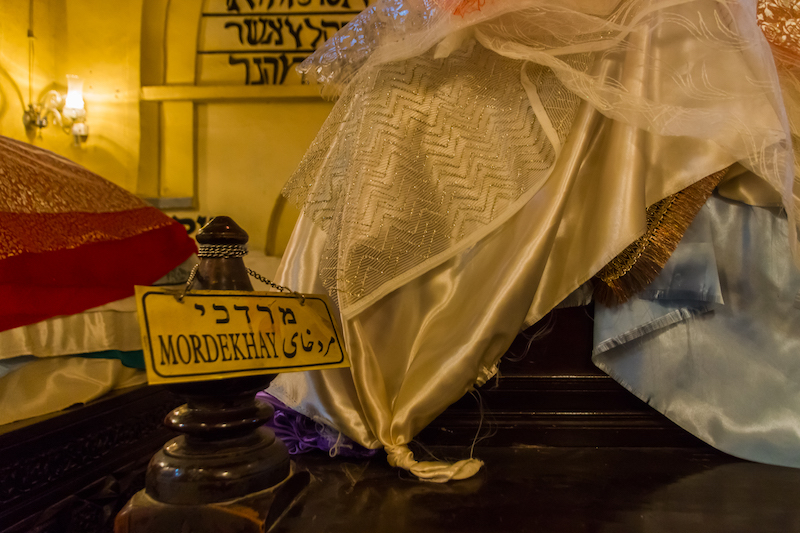 Having been raised as a Catholic, our Old Testament comes from the Jewish bible. In Judaism the book of Esther marks a very important Jewish celebration, the festival of Purim, celebrated every year on 14 Adar (February/March).

I thought this would be the perfect setting to tell their story to my 7 year old daughter. And now for those of you who never heard or read about Esther and Mordecai, let me tell you as well.

It was the third year of the Achaemenid king Xerxes I reign (485-485 BCE). The king (known in the bible as king Ahasuerus) had decided to give a banquet to celebrate. Present were the Persian and Median noblemen as well as representatives of the 127 provinces that were part of the Achaemenid Empire. After days of celebrations and drinking the King decided to summon his queen to show off her beauty to his guests. He sent his eunuchs with specific orders to tell the Queen who had been entertaining the women, to wear her crown.

What happened next is something unexpected for the time. A big shock for king Xerxes and his court. Queen Vashti showing courage decided to be defiant. We could almost say this was the first feminist act recorded in history.  The Queen refused to obey and be paraded as a trophy.

The king was furious and thought advice on what to do. His advisers said the only solution was to repudiate and replace the queen. They made him realize the danger in the precedent the queen had opened. Imagine that if the women in the Empire decided to follow the queen’s example and disobey their husbands. The consequences were unimaginable.

They insisted even more that the king should issue a decree that would be sent in the languages of all the empire stating that women should always obey their husbands and that every man should rule in his own home. Representatives of the king were then appointed in each province to seek suitable virgins as candidates to become the future queen. They were to be taken to court and after a period of training, they would be presented to the king so that he could decide.

In the king’s palace there was an official, a jew named Mordecai. He had raised his uncle’s daughter Esther as his own when she lost her parents. As she was beautiful and suitable he decided to present her as a candidate to the king’s chamberlain in charge of the concubines. He approved of her. All candidates had to go through a period of twelve months of purification before they were presented to the king. During that period Mordecai came to visit everyday to see how she was doing.

Obeying Mordecai’s orders, Esther never told anyone she was Jewish. At the end of the preparation period, the maidens were presented to the king who favored Esther above all others.

One day Mordecai was in court and heard two of the king’s chamberlains plotting against the king with the intent to kill him. Mordecai went to Esther and told her what he had heard. Esther informed the king and the culprits were hanged and the king saved thanks to Mordecai.

Shortly after, the king decided to promote and favor Haman as his vizier, above all princes. After his appointment all king’s servants would bow and show the utmost respect for Haman whenever he passed except for Mordecai which troubled them. Word was passed to Haman that there was a jew in court that never bothered to bow or show him any respect.

Haman was furious and decided to convince the king that jews were troublemakers and distrustful . He told him they only followed their own laws and did not care for obeying the king’s laws and therefore should be destroyed. The king agreed and a decree was sent to every province ordering the killing and destitution of every jew, women and children included. Haman cast lots (like dices) to choose the lucky date for the massacre.

When Mordecai discovered the plan, he sent word to Esther asking for her help. She was desperate and implied that the king had not seek her for some time. But after fasting and encouraging her people to fast for three days, she prayed for a solution. Finally she gathered her courage and through her charm, managed to convince the king to have Haman killed and save her people. It was also crucial that the king had remembered Mordecai’s decisive role in the plot against his life and had decided to compensate him. Mordecai was then promoted to vizier and took charge of Haman’s household after having his family killed.

The jews were allowed to take revenge on their enemies and afterwards they rejoiced and celebrated all over the Empire. This celebration was passed from generation to generation and it is still alive today during the Purim festival. The date is marked at the synagogues with a reading of the Book of Esther. It is customary for children and adults to disguise themselves and celebrate in a festive mood. Gifts of food delicacies are exchanged between friends and neighbors and charity distributed to the poor.

Historically speaking, we find records of Xerxes and his queen Vashti. And a similar name to Mordecai appears in the records. The descriptions of the life in court are also pretty accurate.  There are no records of Esther as queen though. Whether you believe or not that they existed it depends on your faith. Maybe they can be regarded as the symbols of deliverance of a people who had already suffered exile. Some had returned to the Holy land encouraged by Cyrus the Great, when he delivered them from Babylon by his decree in 539 BCE,  others decided to stay and are still leaving here in Iran.

The earlier sources that refer to the tombs date from the 1067 AD where it is referred that they were buried in front of a synagogue. At that time there were 50.000 jews believed to have been living in Hamadan.

There are more details in the 19th and 20th centuries where various authors wrote about the monthly pilgrimage to the tombs. They also refer to the Purim festival and the readings of the book of Esther at the synagogue during which people would hit the tombs with the palms of their hands. They believed there were around 500 Jewish families living in Hamadan and three synagogues. 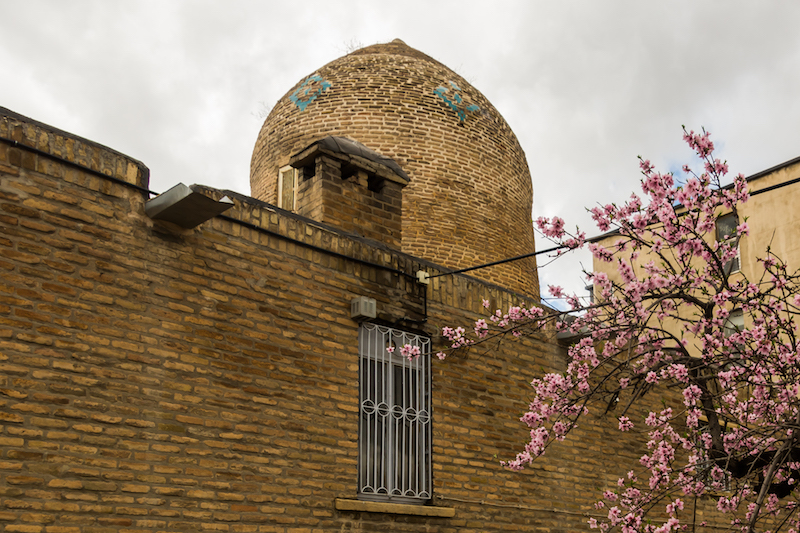 Now only 15 are left, but they still preserve the tombs and the memories alive. Bidding farewell to rabbi Rajad, we promised that next time we would bring him a pen from Austria and one from Portugal to add to his collection of pens from all over the world. He smiled and thanked us. It was a special visit, something we will always remember.