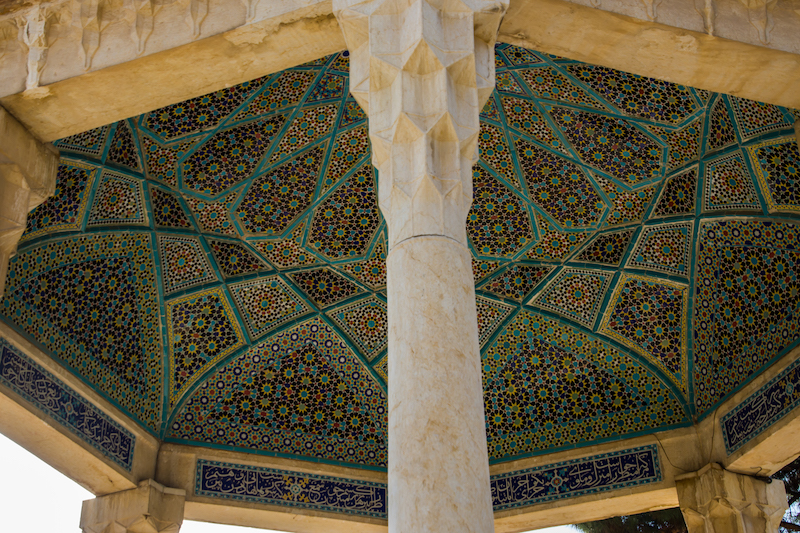 Honoring Saadi and Hafez in Shiraz

No trip to Shiraz would be complete without honoring the Iranian poets Saadi and Hafez. Their tombs continue being a place of pilgrimage for many Iranians, something wonderful and unique to witness.

There is no other country where poets are so revered. Poetry is part of the essence of being Iranian, something you are born with and can’t escape from. Since childhood, Iranians learn the verses of the most famous poets by heart and you can find in most households their writings alongside the Koran.

Hafez is no doubt the most popular poet but that wasn’t always the case. Saadi was the most revered until the 1940s at least. His most famous work “Gulistan” was taught in schools as the highest example to follow if you wanted to master the Persian language. Saadi was also popular in Europe where Gulistan was translated since the 17th century.

Saadi’s last resting place opens to a serene, beautiful garden with flowers and fruit trees. As we approached, there was a wonderful scent coming from the orange trees. 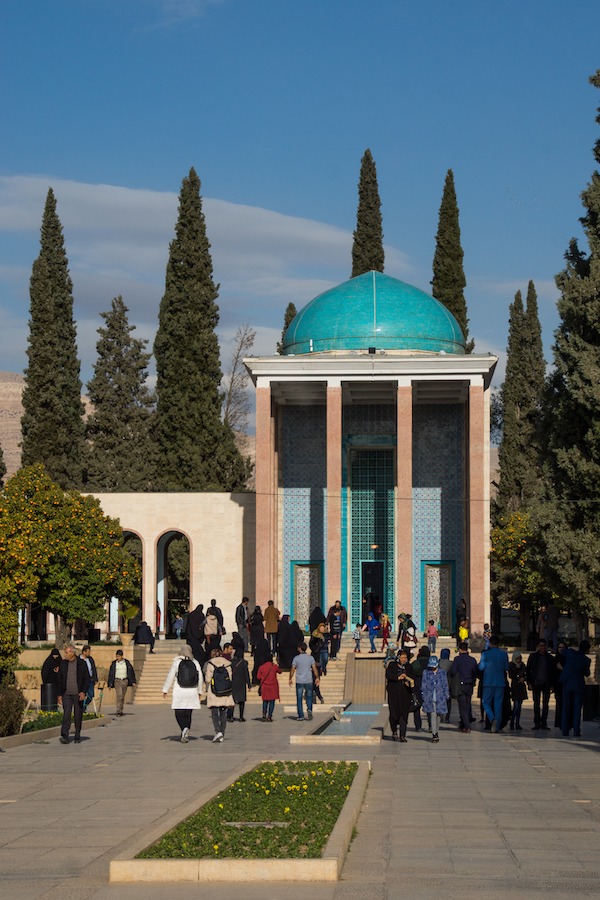 The fruit trees, the garden, the flower motives in the shrine, I think he would have been pleased to be resting in such a place. 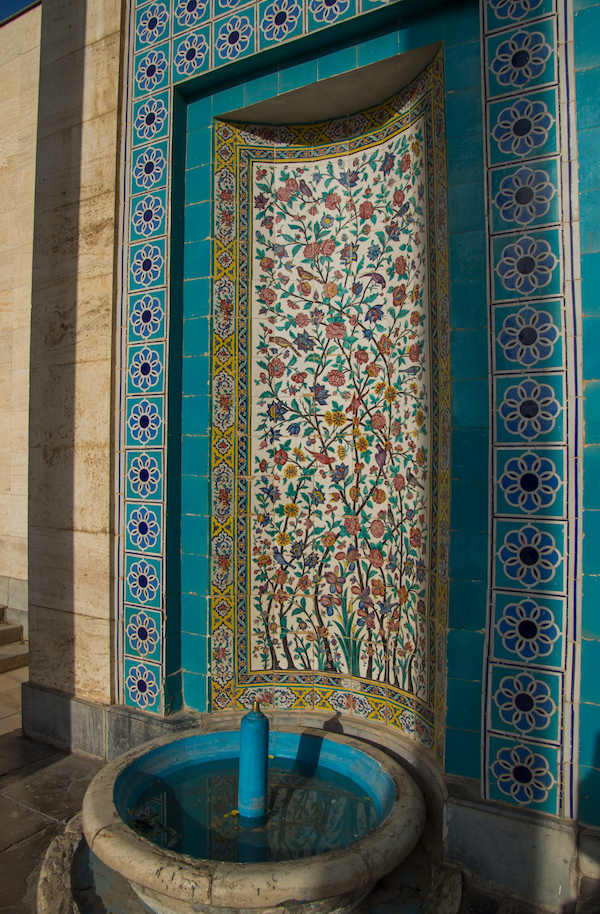 I must confess I have a soft spot for Saadi. One of the reasons is because I found out he had been a traveller as well. And no doubt his travels greatly influenced his work.

Saadi was born in Shiraz in the 13th century and lost his father at an early age. He was later sent to a prestigious college in Baghdad to pursue Islamic studies. Baghdad was the center of learning of the Islamic world at that time, with the best schools, scholars and libraries.

After his studies he returned to Shiraz but decided to leave when the Mongols arrived. He spent the next 30 years traveling mostly in the Middle East. He explored most of Mesopotamia, Anatolia, Syria, Egypt and Arabia. He also mentions his trips through Asia but some experts doubt the accuracy of some of the stories.

He returned to Shiraz a middle aged man, having lived and experienced the world. His writings were influenced by his deep reflections on the life he led and by what he had learned along his challenging path.

His two most famous works are “Bustan” or the orchard and the “Gulistan” or the rose garden. Through the stories told in the verses of the Bustan, Muslims learn about the virtuous path they should follow. Through the prose and verses in The Gulistan, we learn more about Saadi’s personal story and his take on life. His morals, his beliefs, his humanity, his advices all come through in the Gulistan. It is a complete guide on how to live your life.

In the beginning of the Gulistan he tries to explain why he felt the urge to write. There is a particular poem that touched me. He explains how he went to a garden by night with a friend. The friend decides to pick up flowers and herbs to take back to the city. Saadi stops him and explains how quickly all will wither. Isn’t it better to leave it all in the garden where it will endure and be appreciated longer?

Of what use will be a dish of roses to thee?

Take a leaf from my rose-garden.

A flower endures but five or six days

But this rose-garden is always delightful.

I guess writing is leaving something behind longer, that may even outlive you but that others will enjoy. I like that.

But in the literal sense, his poem has also made me think of a more personal story. One of the few eternal disagreements between my father and my mother. My father was a gardener at heart. He tended to our garden with love and care, making fruit trees and flowers grow abundantly under his care. My mother always loved to cut the seasonal flowers and brighten our house with them.

Every time we children heard my father shout from the garden asking who had cut his flowers, particularly his roses, we always smiled. He knew very well who the culprit was. And my mother would eventually come out and confess.

She always questioned his complaints. After all we had so many flowers in the garden, why not cut a few to brighten our house? To which he always countered that the flowers should be in the garden to brighten it and makes us happy. They would last longer outside in the sun than in any vase inside he added. My mother would shrug her shoulders and go inside while he would shake his head in disapproval and continue tending to the garden with his usual love.

I miss that and I miss my father who is unfortunately gone. I was usually on his side although I must confess I also understood my mother’s point. Like Saadi’s poem, my father’s garden is still there, cared by another owner now. She is a nice person, he would have liked her.

So here we were, coming a few centuries late to honor Saadi. They say Hafez usually has more visitors but I was happy to see a small crowd of Iranians paying homage. Around the walls there are verses from his works in Farsi to inspire those who visit. 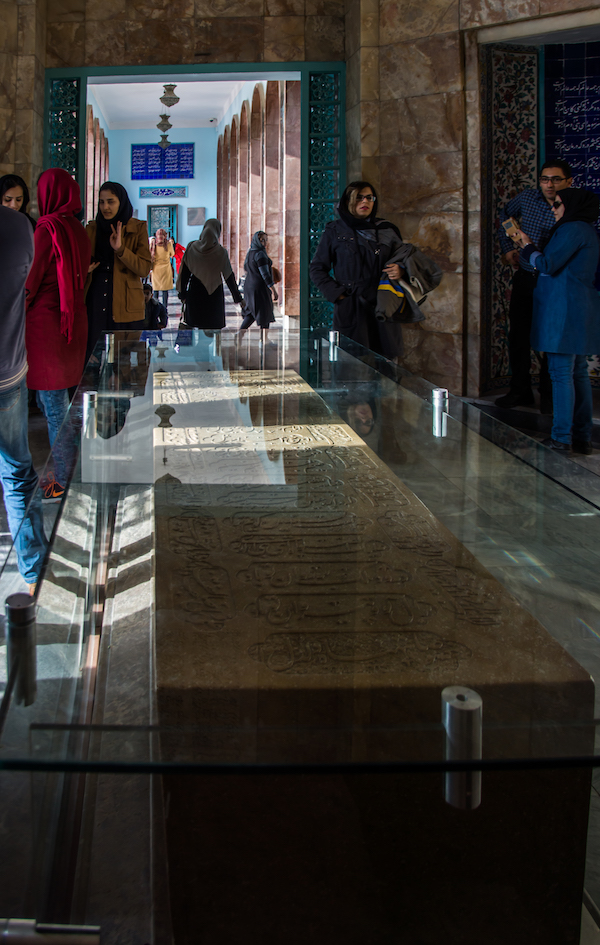 Outside there was a relaxed, happy atmosphere, with families enjoying the sunny day. 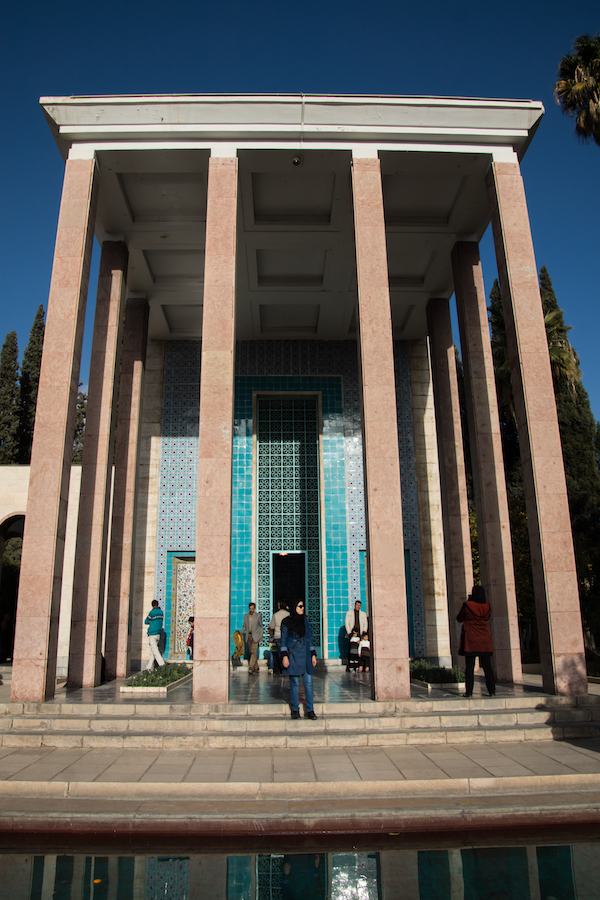 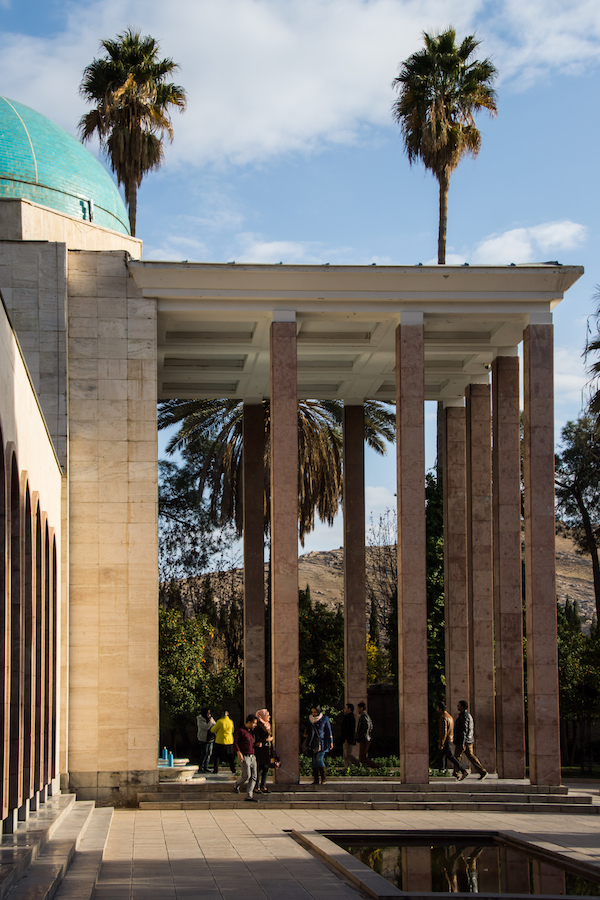 As much as I wanted to linger next to the wonderful orange trees, it was time to pay our respects to Hafez. 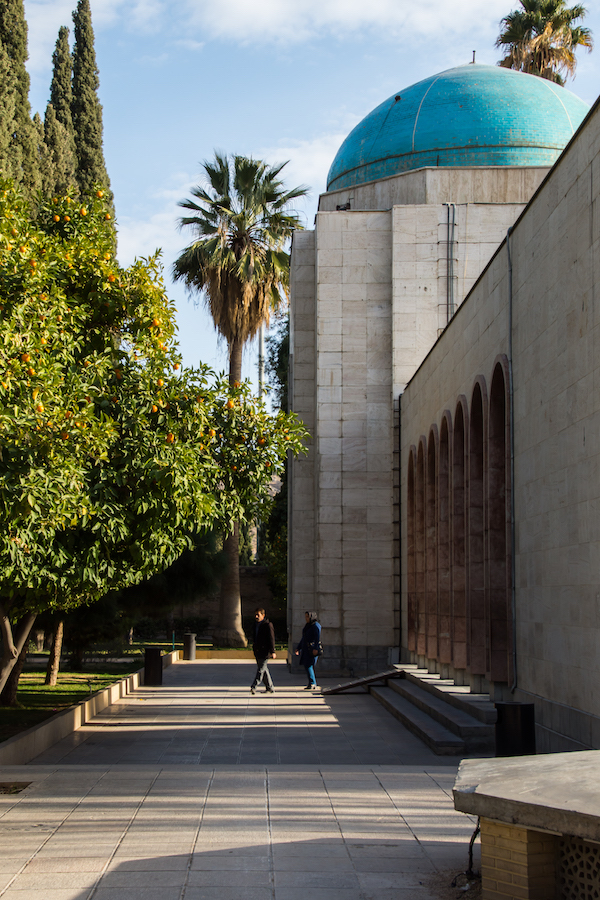 Before leaving I remembered seeing a few years ago in New York at the United Nations headquarters this verse from Saadi, that has seen many translations since. This one was quoted by the then Secretary General Ban Ki-moon when he visited Iran in 2012:

All human beings are members of one frame,
Since all, at first, from the same essence came.
When time afflicts a limb with pain
The other limbs at rest cannot remain.
If thou feel not for other’s misery
A human being is no name for thee.

If only we all understood how true this is.

Appropriately Hafez’ tomb does not lay far from Saadi and you can easily visit both on the same day. Unlike Saadi though, Hafez, born in the 14th century, lived most of his life in Shiraz, a city he loved with all his heart. He graduated in Islamic studies and was a theological lecturer, particularly in koranic studies. The name Hafez means the one that learns the Koran by heart, which they say he did since an early age.

His work was influenced by Saadi and others that came before him, but he created his own style, a universal style that speaks to everyone. In his most important work, the “Divan” his poems have the ability to comfort you when you most need it, to uplift you, to show you that life is better than you think.

Walking towards his shrine, there were these beautiful painted murals as a promise of what lay ahead.

Finally, crossing the threshold and admiring the beautiful grounds where he rests, I saw why they say he is much more popular. There was a bustling energy in the air, particularly around his tomb. 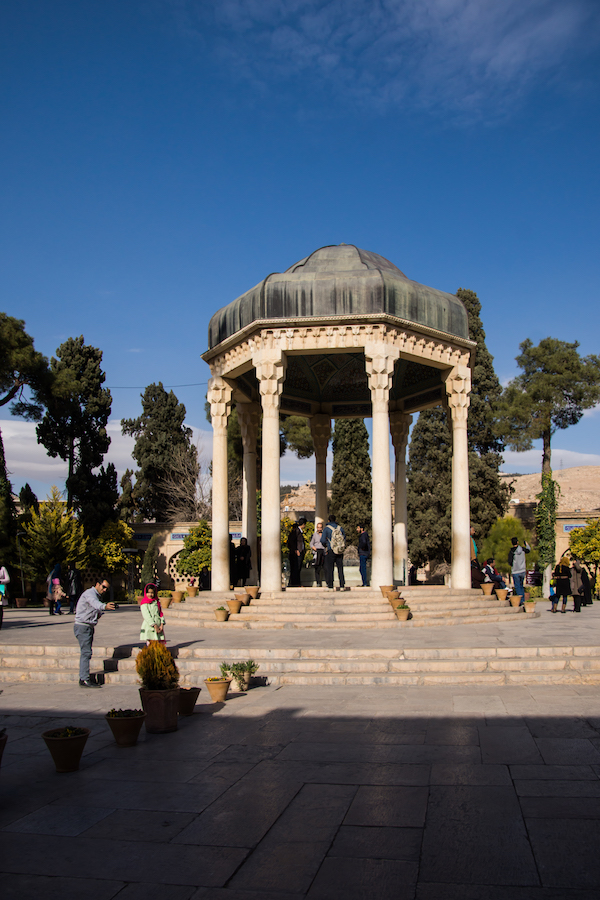 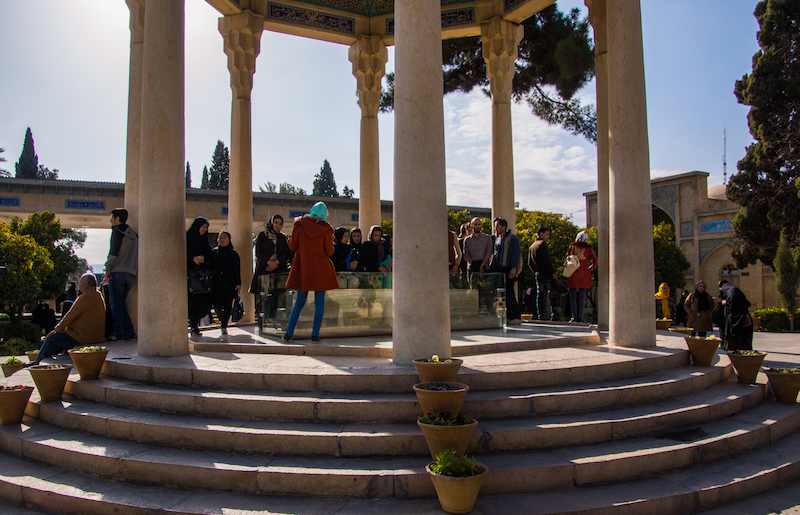 It is customary to touch his grave with two fingers while you say a small prayer. There were a lot of young Iranians around his tomb, paying their respects. Here and there, we saw people reciting his verses to their children or friends. There was a festive mood all around, contrasting with the more serene mood around Saadi’s tomb. 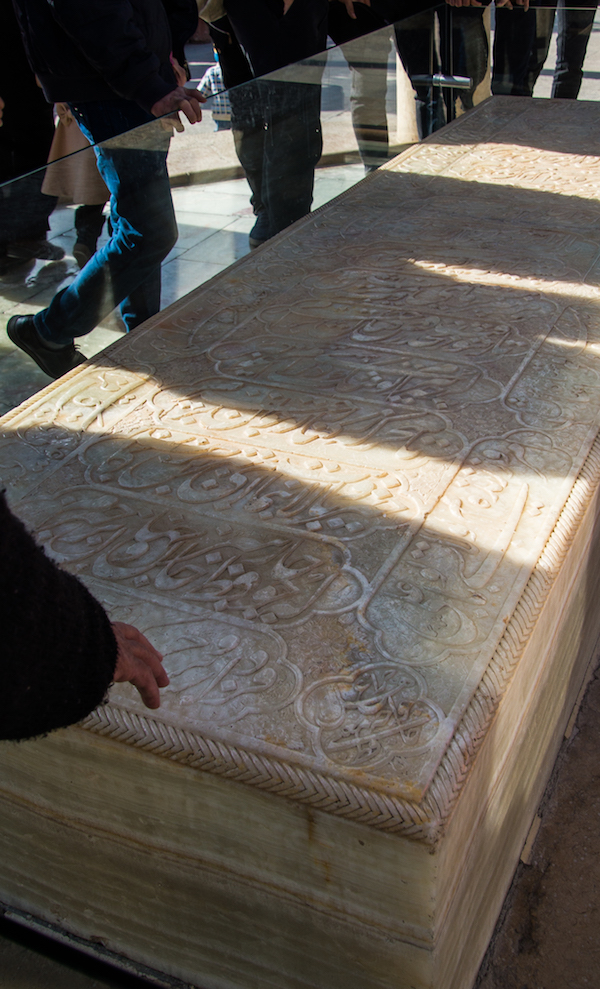 As if to match the overall mood, the shrine has an impressive tiled colorful cupola, but the rose garden, fruit trees and courtyards are also beautiful. 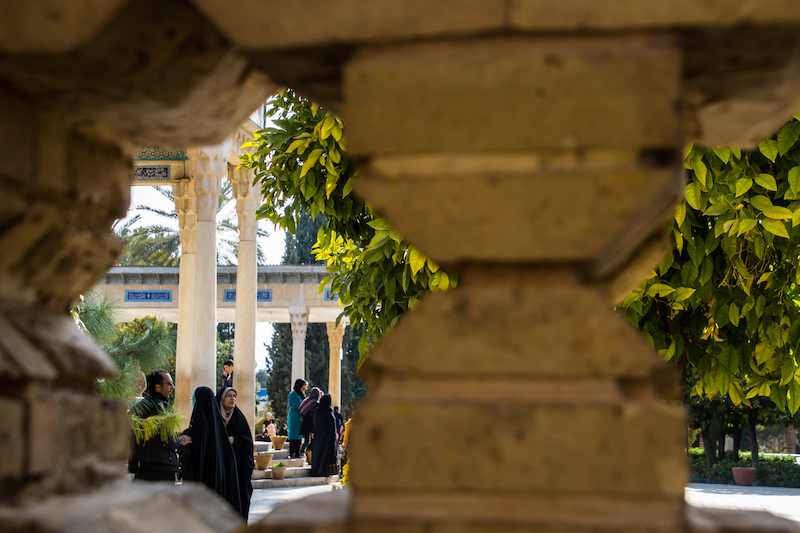 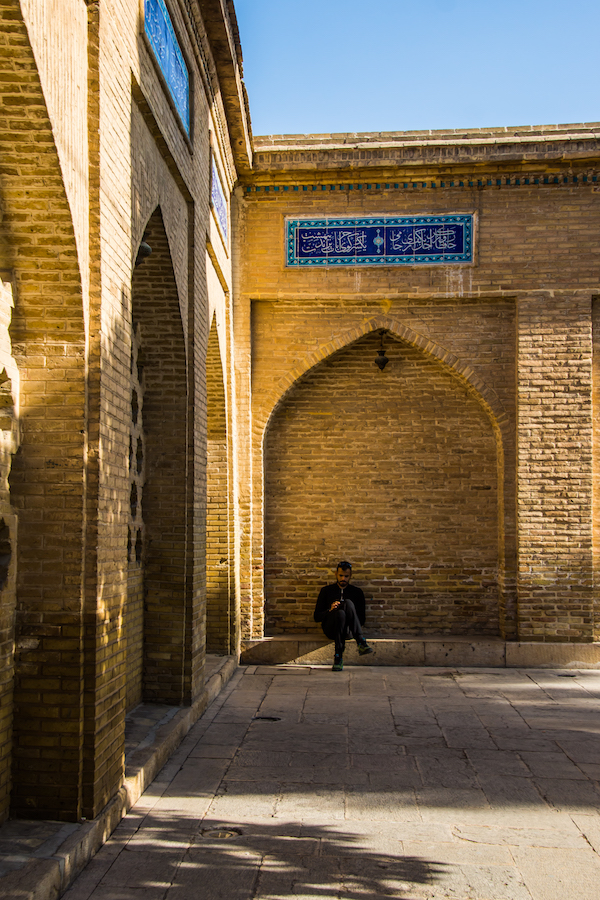 I felt moved and inspired. To witness such love and reverence towards a poet is rare. To have a poet that, through his feelings, metaphors and irony touched and continues to influence such a wide spectrum of the population is very special. Whether you take his poems literally or mystically, the fact is, that he seems to be able to guide you through life. Whether spiritually or more practically, warning you against hypocrisy but at the same time pointing out how important forgiveness and honor are. All is open to debate and free interpretation according to your personal needs.

But his influence does not stop there. There are those who use his poems as a glimpse to their future and a solution to their troubles. If they have a problem, a question, a need for guidance, they pick up his “Divan” and open randomly on a page. Like an ancient oracle, you ask Hafez for guidance and the answer is given in the pages of his writings. This tradition is called Fal-e Hafiz and has been kept for centuries, not only in Iran but also in other parts of the Middle East. Even Queen Victoria is said to have consulted Hafez in times of trouble.

His poems have also influenced artists and musicians foreign and Iranian, who have used his poems in their compositions, like Brahms.

Contemplating one last time these beautiful grounds, I leave you with Hafez’ words when approached by a foreign student, who wanted permission to translate and compile some of  his poems into a small book. 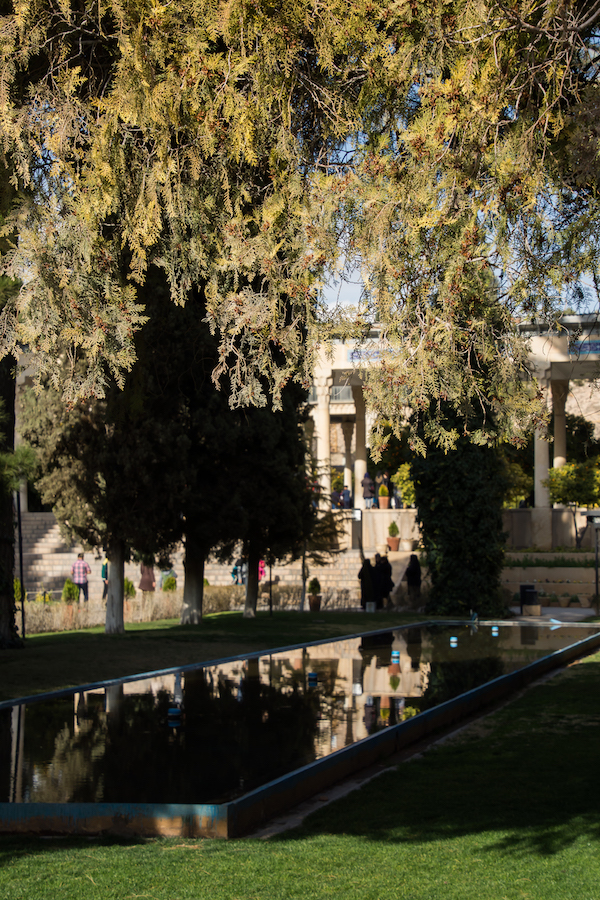 The student wanted to know what was the most important trait in his poems that he should focus on, to make an authentic and faithful interpretation of his work. And this is what Hafez answered:

“My poems lift the corners of the mouth – the soul’s
mouth, the heart’s mouth. And can effect any opening
that can make love.”

(translation by Daniel Ladinsky who has written several books about Hafez).

One last word about translations. There is nothing like reading poetry in its original language. There are always nuances and hidden meanings that are very particular to any one language and are often lost in translation.

Iranians will always feel more and interpret better what was written by their own poets. As I do when I read Portuguese poets. But I appreciate the role of translators. They put their heart and soul into their work, so that more people in this globalized world can have access to culture, literature and wisdom from different countries.

Not being able to master Farsi yet, if I ever will, I’m grateful I can read and enjoy the words of these poets. Even centuries later, I can still learn so much about life from them.