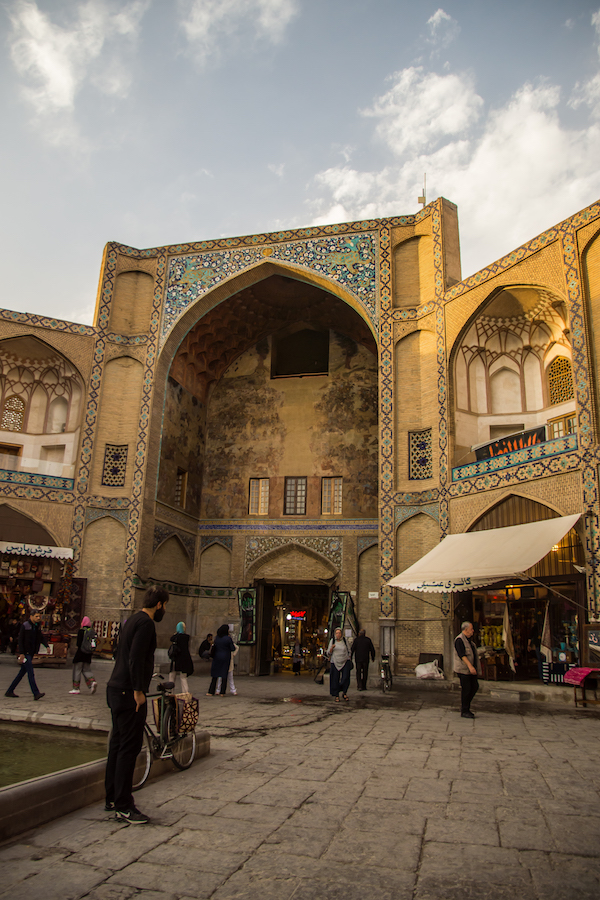 This was definitely not my first sand storm and I suspect it won’t be the last. When we woke up and heard the gusty winds, I knew it was going to be challenging. So what to do in Isfahan when there is a sand storm? I could only think about something I have always loved, in this case exploring Isfahan’s Grand Bazaar.

What could be better than to get lost in one of the oldest bazaars in the world, this huge myriad of vaulted corridors and pathways? And when I say get lost, I do mean it literally. I don’t use maps to guide me, I usually follow scents, colors, wonderful objects, anything that catches my eye. It is really the best way to do it. Eventually all pathways will lead to the impressive Naqsh-e Jagan square also known as Imam square and a UNESCO World Heritage site.

Reaching the square was the tricky part. On the way there, the sandy winds would hit us sometimes quite strongly, forcing us to stop and protect our face and eyes. When we finally made it, there was a haziness in the air from all the dust. The horse carriages were empty, waiting for the dust to settle and customers to come back. 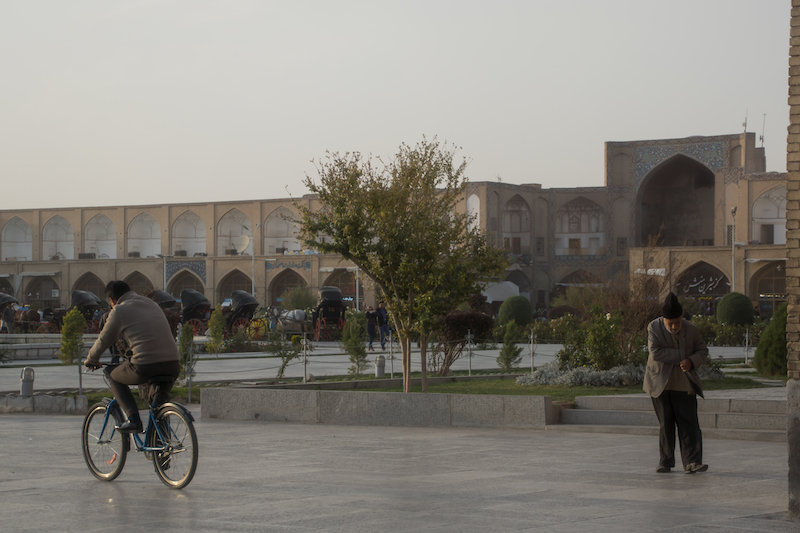 There were moments here and there when the sun would break through the grey cloud roof which allowed us to briefly view the beautiful main gateway to the Grand Bazaar known as the Qeisarieh in some of its splendour.

After admiring the beautiful tiles of the gate, we entered a world of wonder dating back to the 17th century and the Safavid era.

The first thing that catches the eye is the vaulted ceiling but then there is so much more to see. Where to turn, left or right or shall you just follow any path and see where that leads you? 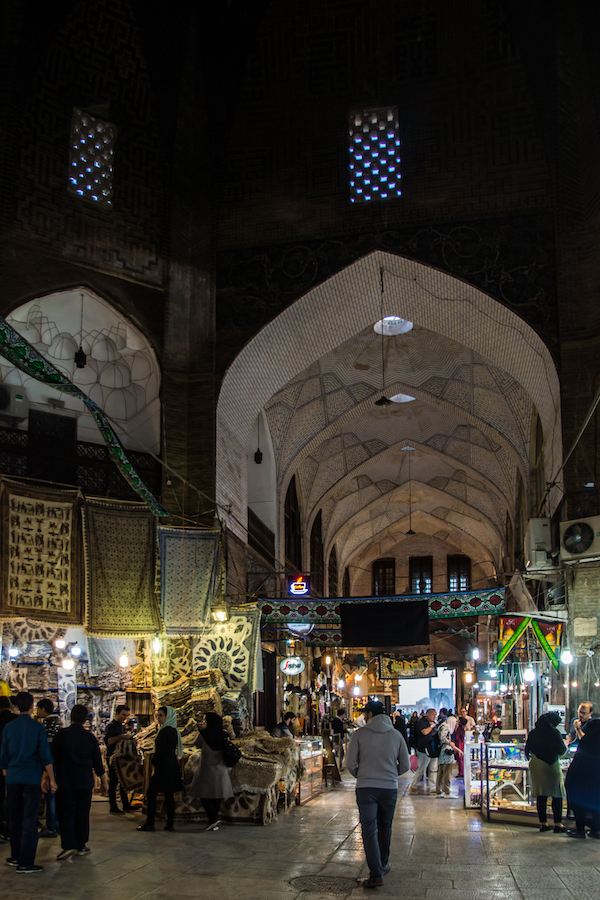 Life at the bazaar was slowly picking up. Shops were starting to open, getting ready for another busy day, at least hoping for one. 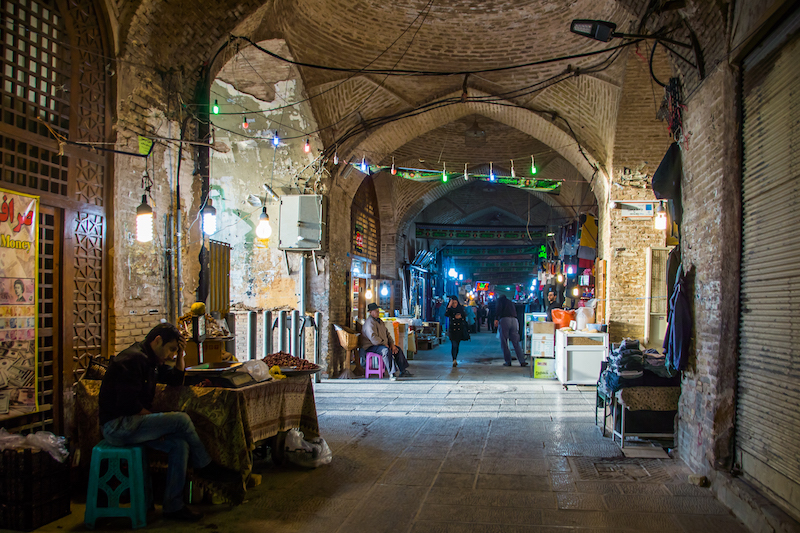 Some pathways looked straight out of Ali Baba’s cave, calling on me to explore them. I would need a palace to put all the beautiful items on offer, but there is nothing that prevents me from admiring the skill that was used for some of the handicrafts. The detail and effort put into certain pieces is wonderful and you can see artisans working beyond the stores front displays. We were lucky enough to observe some of them at work. 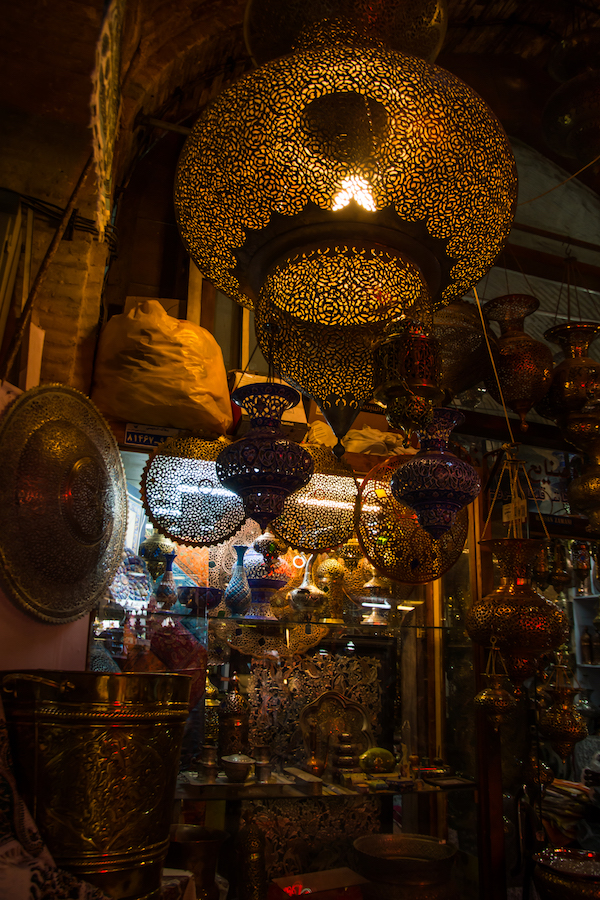 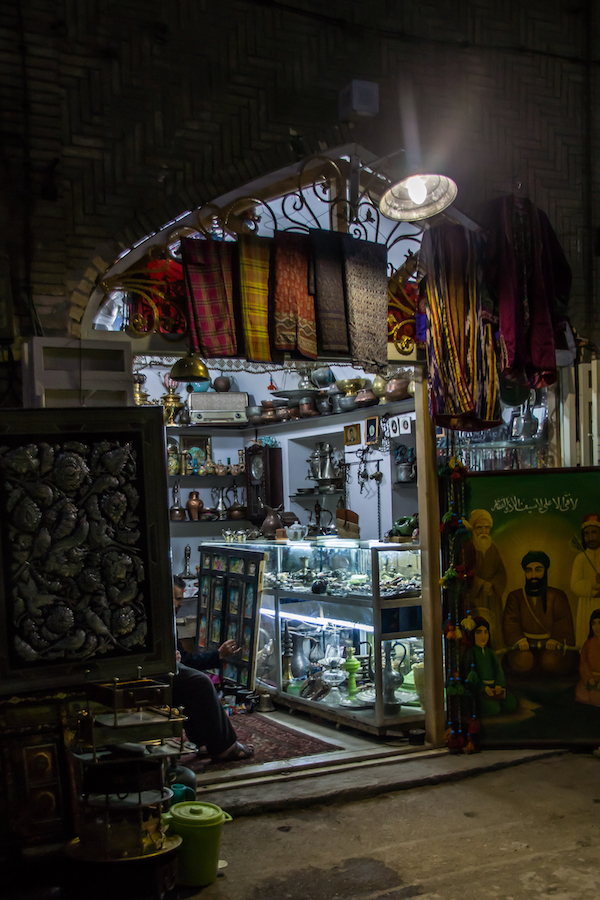 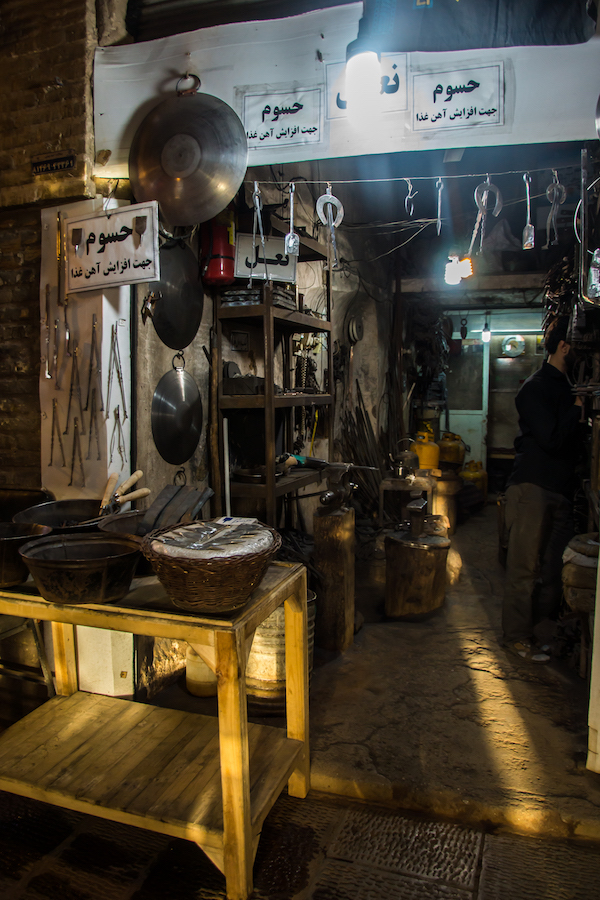 And then I saw him. He called me over to see what he was selling. I approached and my husband moved uncomfortably away as he always does when he feels I’m about to make a purchase. Earlier I had seen some shops with bone miniature paintings. These are pieces of white bone where artisans paint scenes mostly from the Safavid era. Battles, hunting scenes and daily life are the most common themes. You can see some small framed pieces just behind him. 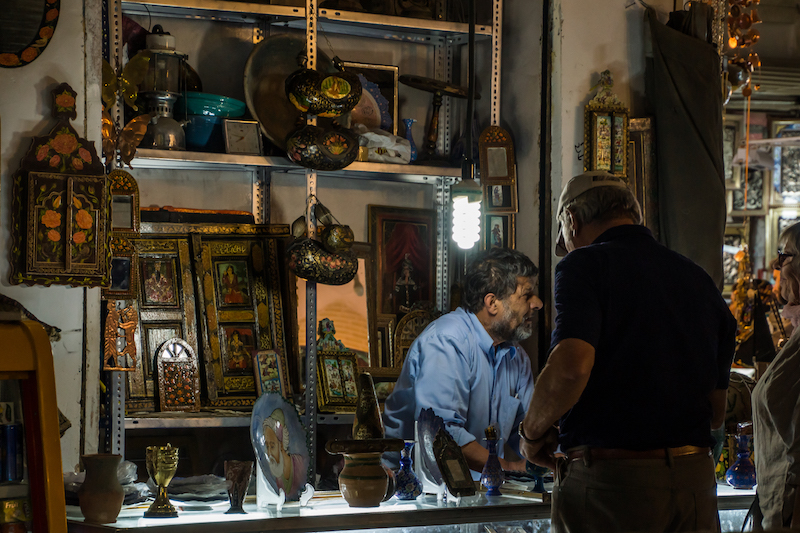 But two unframed scenes in the vitrine caught my eye. It has been a while since I lived in the Middle East so I thought that maybe I had lost some of my negotiating skills. He saw my interest and told me he would give me a good price. Then the negotiations started. It is always important to know where they stand, what is the starting price and then you go from there. If you are patient like me, you can even get to half the price offered. We went back and forth until I said I had to leave and then we made a deal.

I left him talking to the next clients, a couple of tourists and continued without aim, just the desire to explore. We passed the famous tea sets. 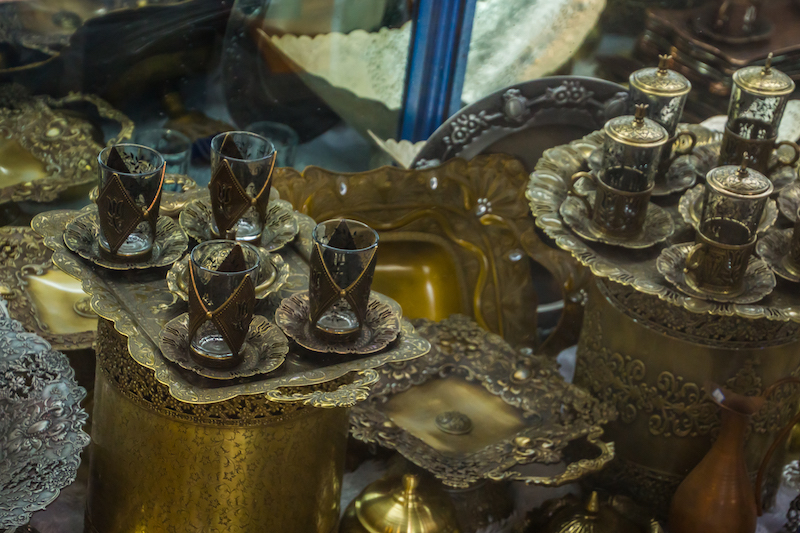 And the intricate filigree work. 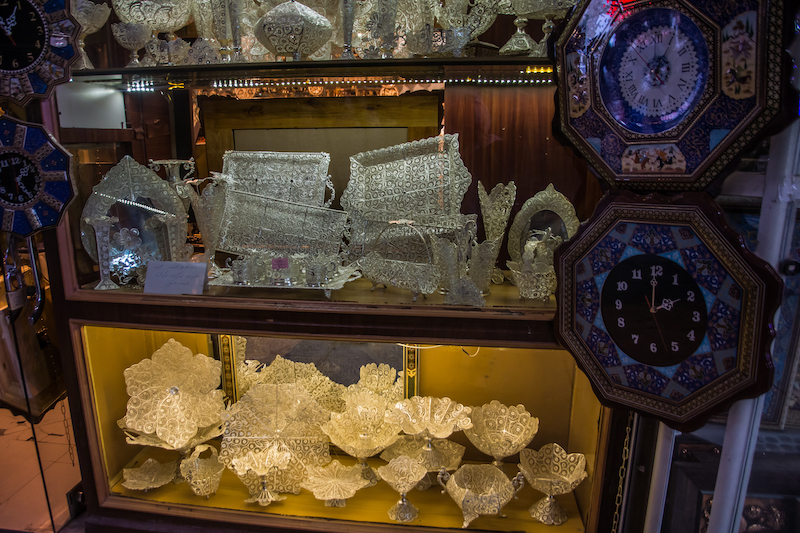 But I wasn’t looking to shop more, I live here, I have time. I started wondering about the spice shops. Turning a corner there it was, the scent and strong red color of the saffron and many other spices and herbs, if only we had our car already. I’m sure I would have bought a bit of everything, I lingered, fascinated by the variety and display. Some of it I tried to identify by smell and touch but couldn’t. I’m hoping in time I will. My husband called me to reality, it was time to go on but I just did not want to leave. So much to look at! 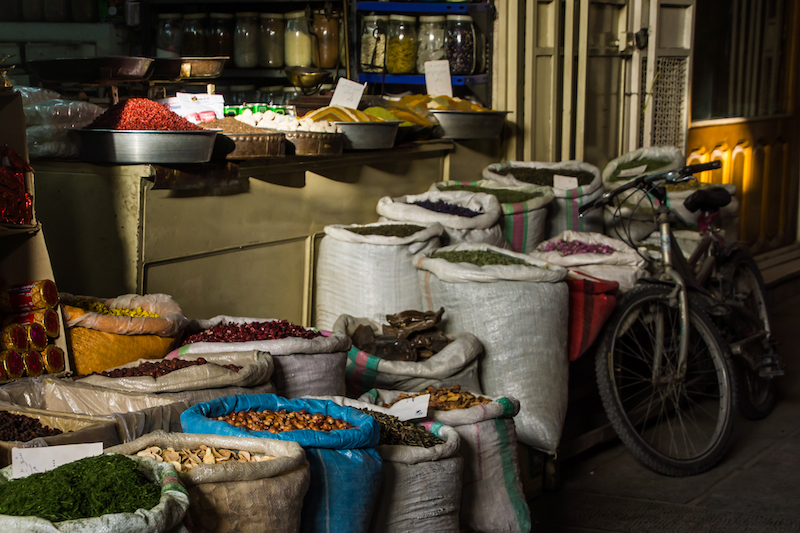 But then ahead, the light reflected on something else, wonderful nuts and pistachios. The say the Iranian pistachios are the best in the world and I’m inclined to agree. Since we arrived in Iran, our pistachio consumption  has increased substantially. 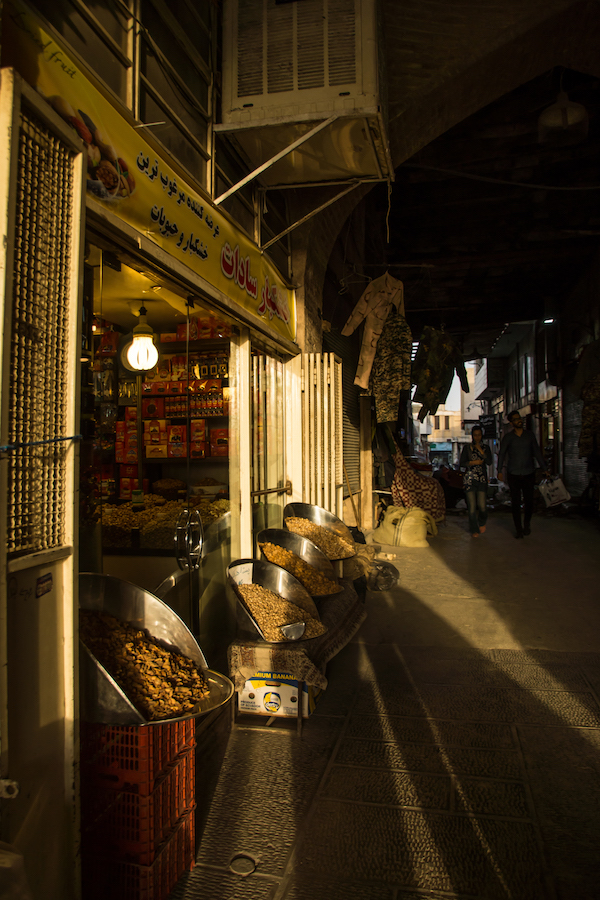 But fashion is also present in the bazaar and the scarfs are obviously an important fashion item for women in Iran. There are all sorts of colors, patterns and sizes. There are also many ways of wearing the scarf depending on age, class, origin and how religious you are. It is nice to be able to choose so many original ways to wear it. I just loved the hairstyle and makeup of these mannequins at the bazaar. 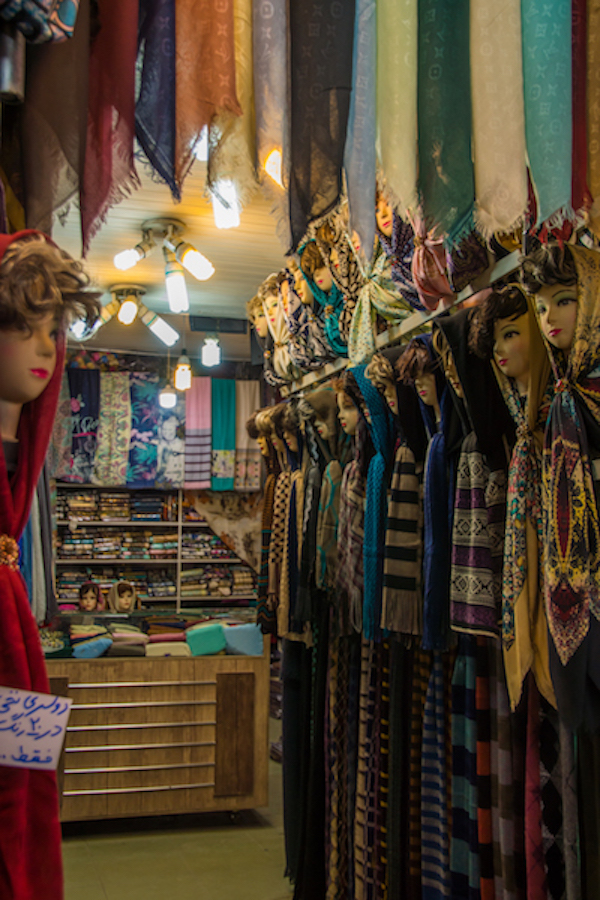 Apart from all the wonderful things I found at the bazaar, there is something else that enchanted me and that was the architecture. The little details, the empty alleys, the vaulted ceilings. That is one of the reasons I love to get lost in a bazaar. I often wander off the main pathways, to see what is beyond, to follow lights, colors or shapes. I encourage you to do the same. 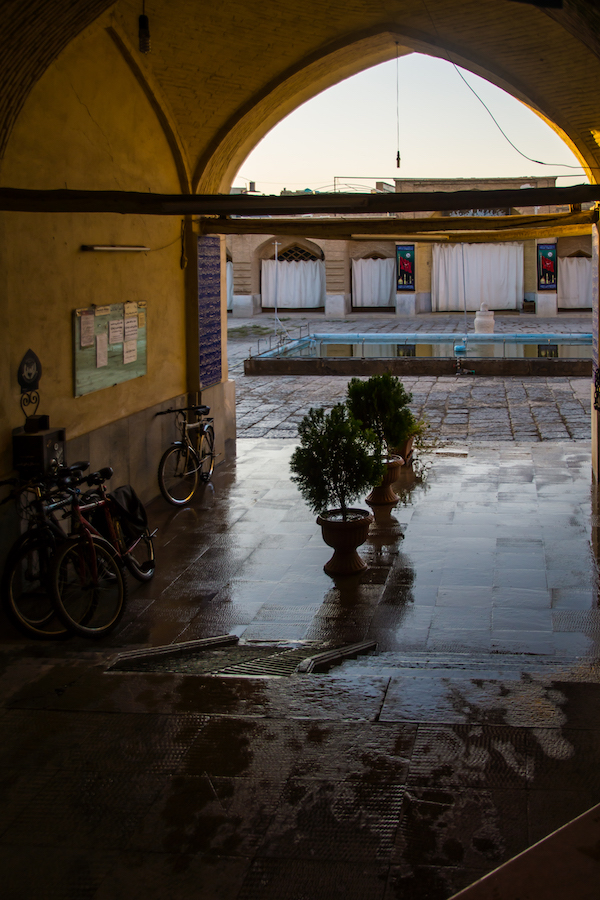 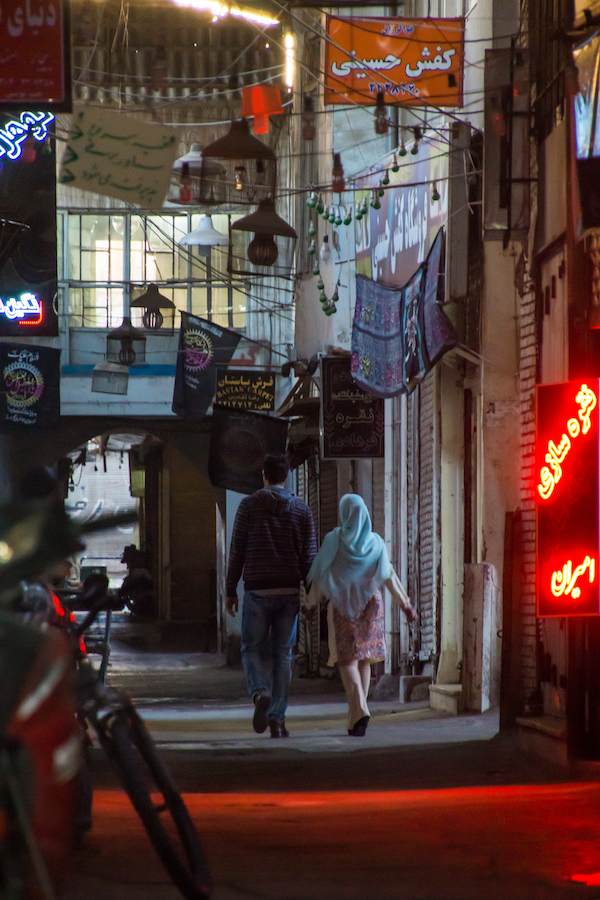 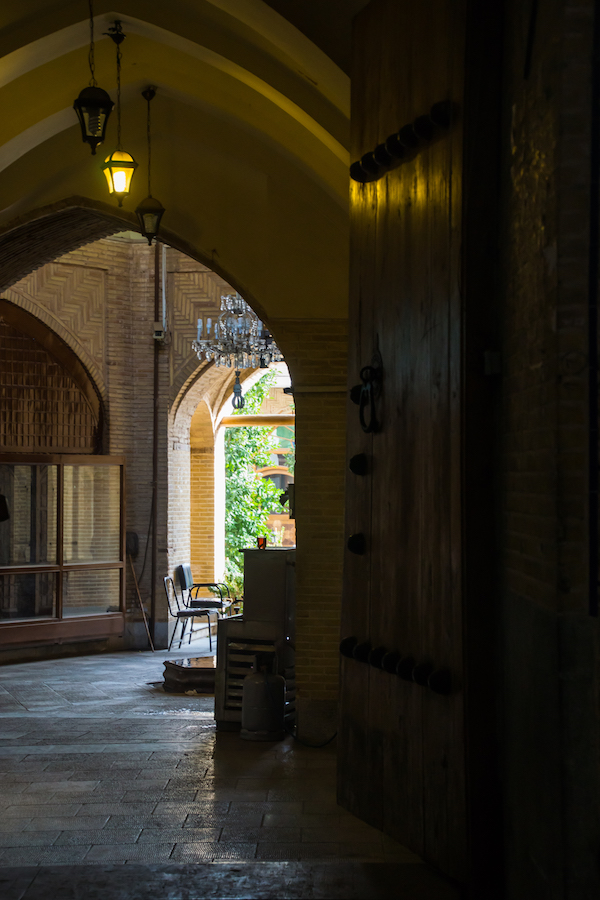 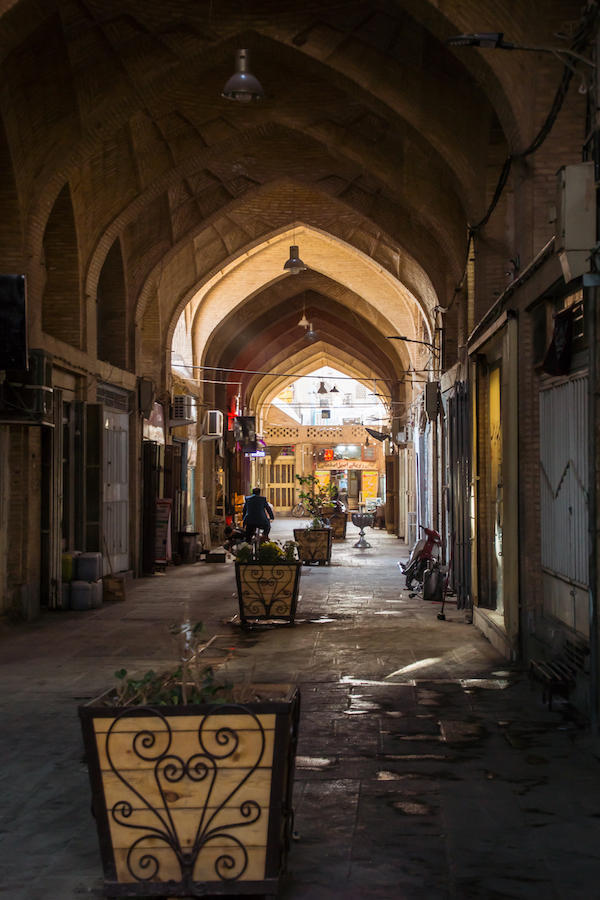 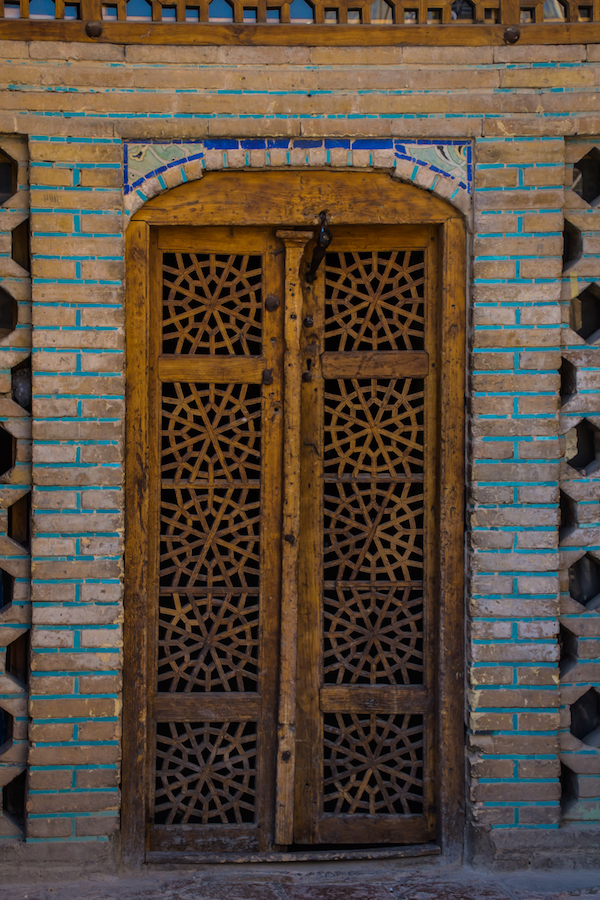 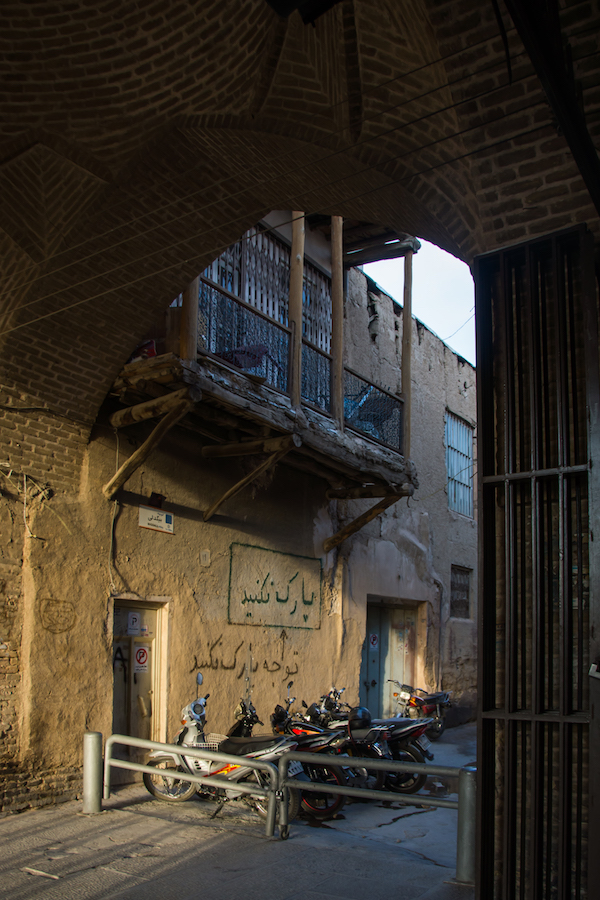 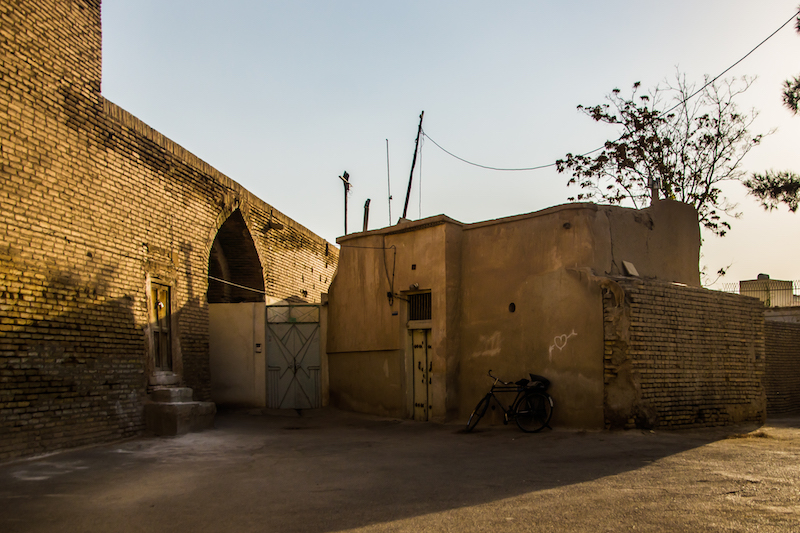 When we finally made our way back to the square, we were tired but happy we got to explore so much of Isfahan’s Grand Bazaar. But we didn’t see it all.  There will be other visits, new discoveries.

Just before we stepped into the square there was still time to admire the famous metal plates and trays and the copper pots that I love so much. Next time, I thought, maybe I can even take something with me. The winds by then had calmed down and the sun seemed set on timidly shining through the clouds. 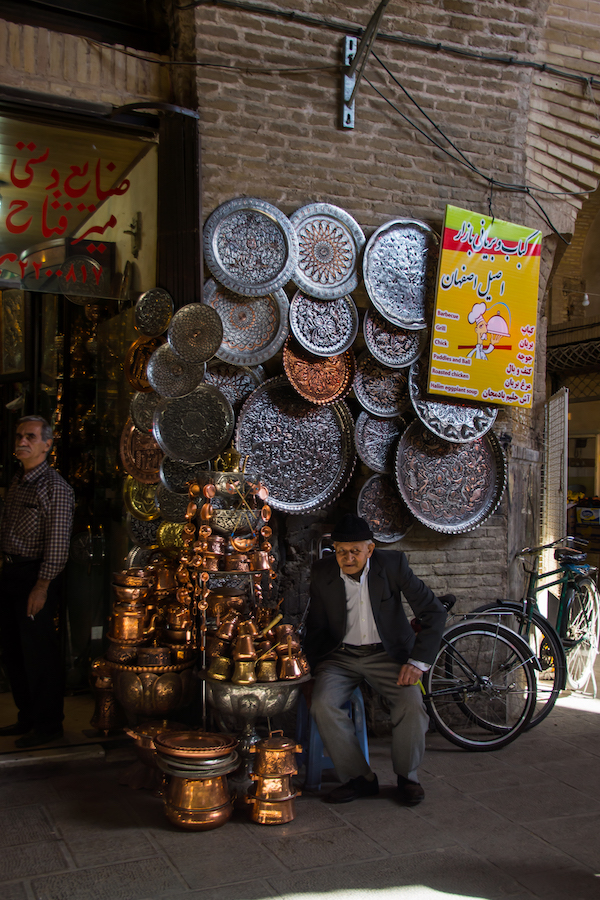 In spite of the new shops and supermarkets, I was happy to realize that Isfahan’s Grand Bazaar is still very much the heart of the city. The bustling activity shows that the local population and the tourists help keep it alive. I thought about the tea houses, the bathhouses and the old mosques and madrasas that have also always been present and are part of its history. Next time, for sure …