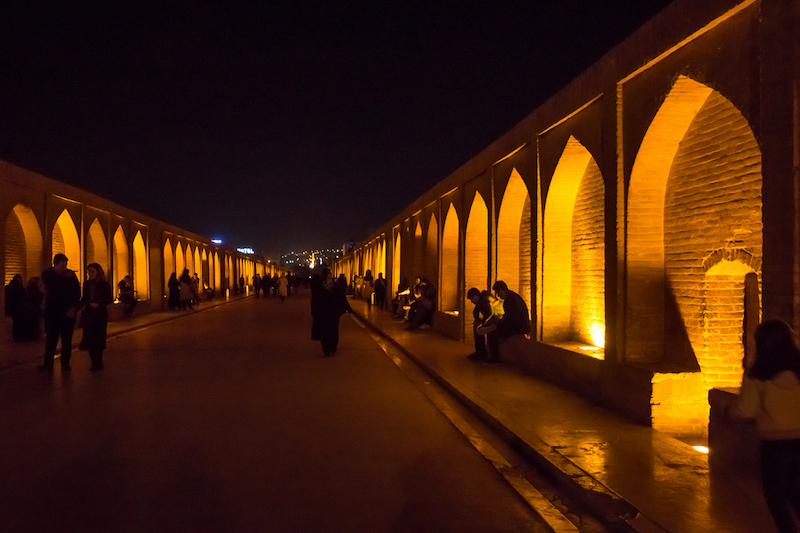 The sun had already bid its farewell when we finally made our way to one of the most beautiful bridges of Isfahan: the Si-o-seh Pol bridge, also know as the bridge of the 33 arches, as its name in Farsi indicates.

At a walking distance from our hotel, we had to make our way through the heavy afternoon traffic. Although there are pedestrian crossings in Iran, no car really obeys them unless there are traffic lights as well. So gradually we advanced, measuring the traffic’s speed and signaling the cars to let us through. Sometimes they pretend not to see you but finally someone will stop and we manage to get to the other side unscathed. In the beginning I was really scared but now I’ve gotten used to it.

I did not mind when darkness fell upon us, I was hoping I could see the bridge illuminated and it did not disappoint. There it was in all its grandeur and beauty. 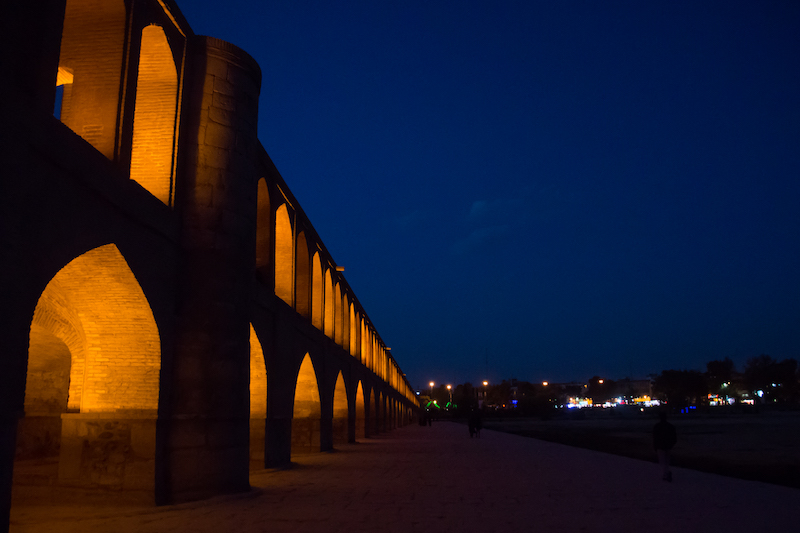 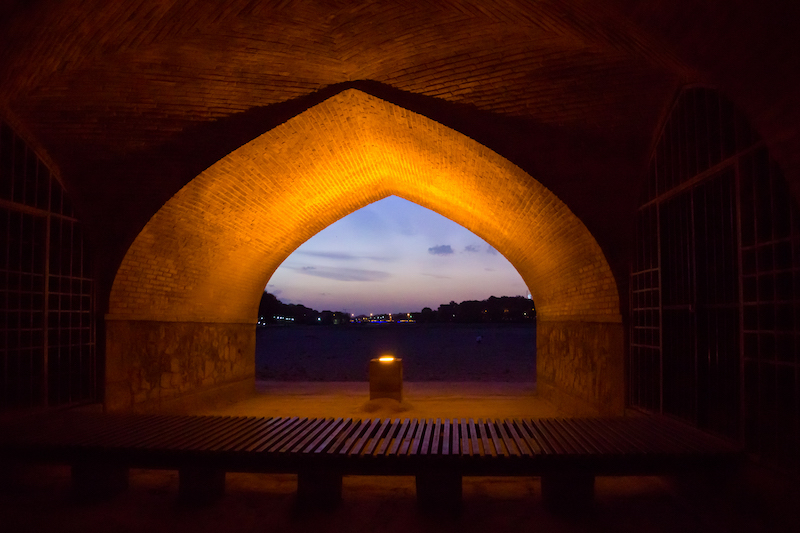 In the beginning it looked deserted but soon we began to see people strolling and when we looked up we realized how much activity the arches hid. 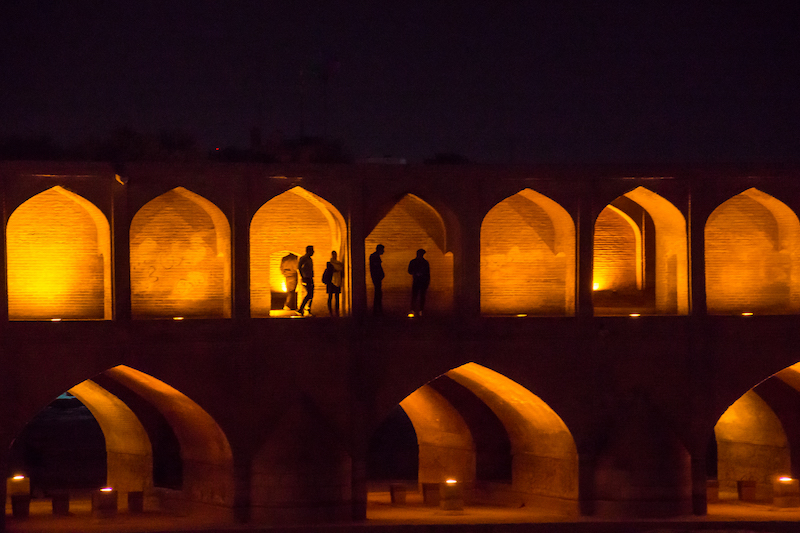 Brought by the wind we were soon hearing laughter, conversations, Persian music and seeing lots of flashes from selfies.

We made our way slowly towards the main walkway passing on the way the water canals that unfortunately looked very dry at this time of the year. Where were the waters of the Zayandeh river that had once flowed freely among the famous Isfahan bridges? After all the river and its water canals flowing through the city had greatly influenced Shah Abbas I decision to choose Isfahan as capital of his Safavid Empire in the 16th century.

In the 17th century, a better planning  of water canals was conceived to distribute the water of the Zayandeh river to the different suburbs of Isfahan. This allowed its waters to be used for irrigation of private gardens, agricultural lands and freshwater distribution of the city which contributed to the increase of the population and the development of the economy. Isfahan, as the capital of the Safavid Empire, became a green oasis set in an otherwise desert region as well as an important commercial hub.

But the increase of the population throughout the centuries and the escalating extraction of water for agriculture and industries, advanced the dryness of the river banks. Water increasingly receded and now Isfahan presents this dry look for most of the year.

The government is trying to tackle the alarming scarcity of water resources by creating programs that teach farmers and industries how to better use those resources, not only in Isfahan but at a national level. They are also using the social media to influence the younger majority population to care more about the environment.

In March just in time for the Persian New Year and with the help of a dam, the waters flow for a while throughout the city. So we promised ourselves to come back when Isfahan briefly returns to all its glory. 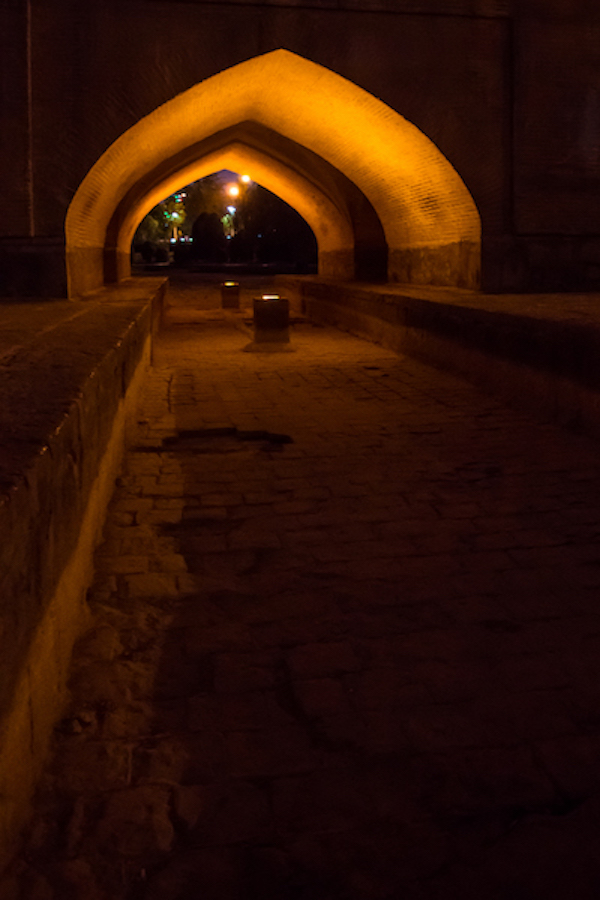 When we finally got to the pedestrian walkway it was even more crowded. The Si-o-seh Pol bridge is obviously a favorite meeting place for friends, couples, families and tourists who enjoy the joyful and relaxed atmosphere.

But this is not the only bridge worth visiting. The next day walking along the dry river banks, we went in search of the other bridges of Isfahan.

The first one we encountered was the Marnan bridge. It is believed to have been commissioned during the Safavid era although its foundations could date as early as the 3rd century. There were groups of teenage boys and girls enjoying the warm sunny day, exploring the bridge or bicycling. 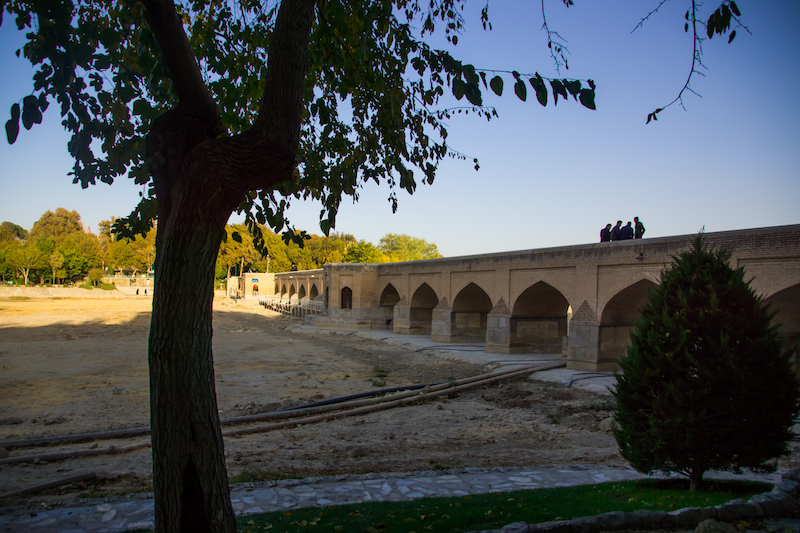 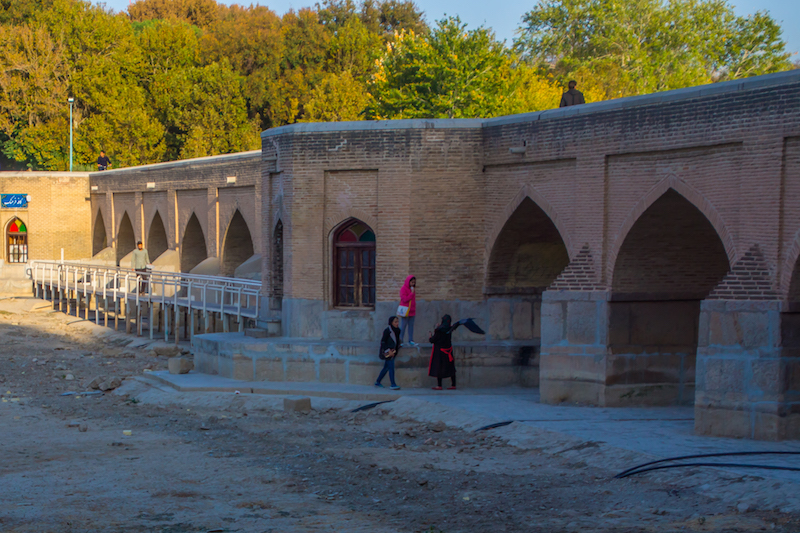 I could see the water marks and imagined how different it would have looked if the river had been flowing through the arches. Next Spring I thought. Continuing on the dry river path, we found beautiful gardens. Iranians love picnics and being weekend, many families were profiting from the nice weather to spend time together. There were wonderful scents almost inviting you to follow and an array of typical dishes that made us very hungry. Children were running around playing while adults shared stories, food or read. 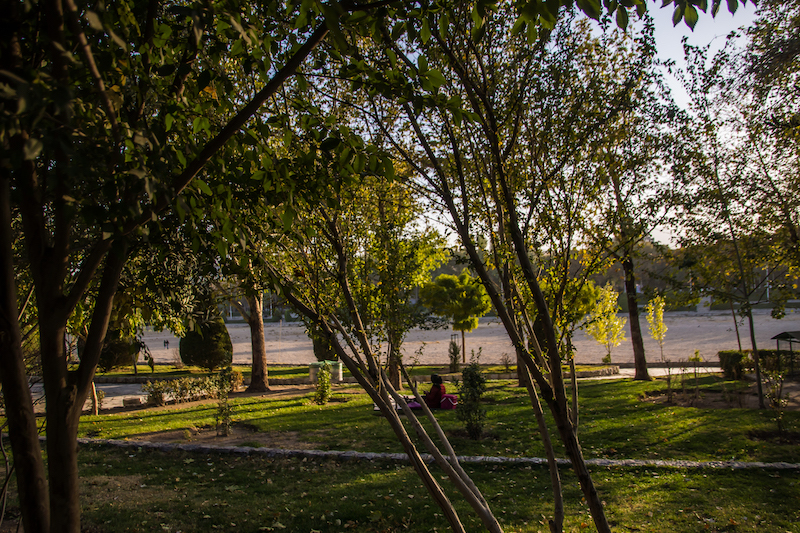 And then there it was hiding behind the trees, one of the most admired bridges of Isfahan, the Khaju bridge. 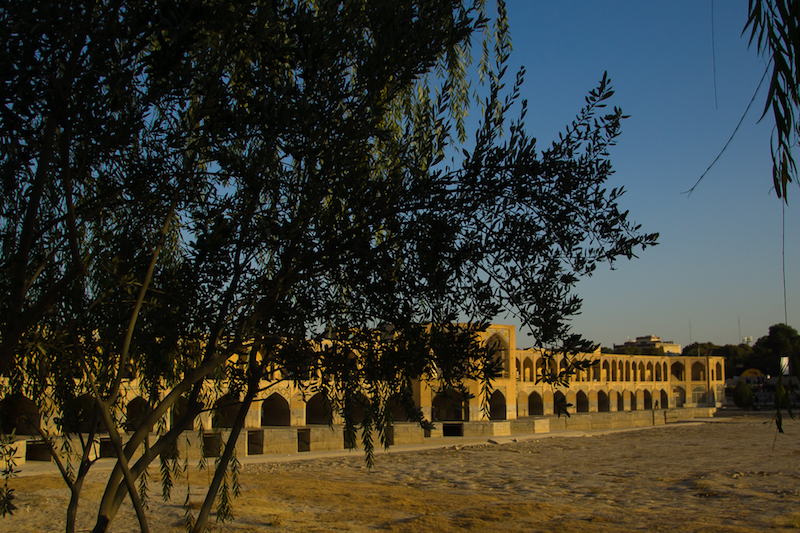 Built in the 17th century, commissioned by Shah Abbas II, it served as well as a dam to irrigate the gardens along the river. In the center there was a royal pavilion where Shah Abbas II and his guests admired the view and enjoyed different festivities like boat racing or fireworks.

Looking at the octagonal beautiful structure of what was once the Royal Pavilion, I could almost imagine Shah Abbas II and his entourage enjoying the view and aquatic entertainment provided by the now missing waters of the Zayandeh river. The beautiful tile work still shows some of its past glory. 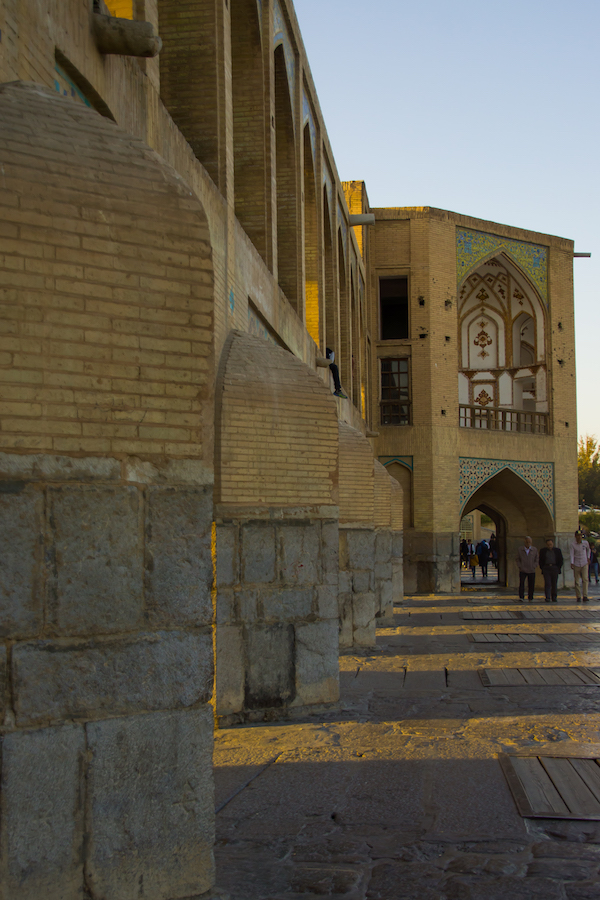 Until the 19th century, the interior of the pavilions used to be decorated with impressive and some say indecorous wall paintings which haven’t withstood the passing of time. Now the bare small pavilions under the arches are mostly used as a resting and meeting place. It is common as well to hear someone singing as the acoustic is really special. We were lucky enough to enjoy one of those improvised concerts under the arches. 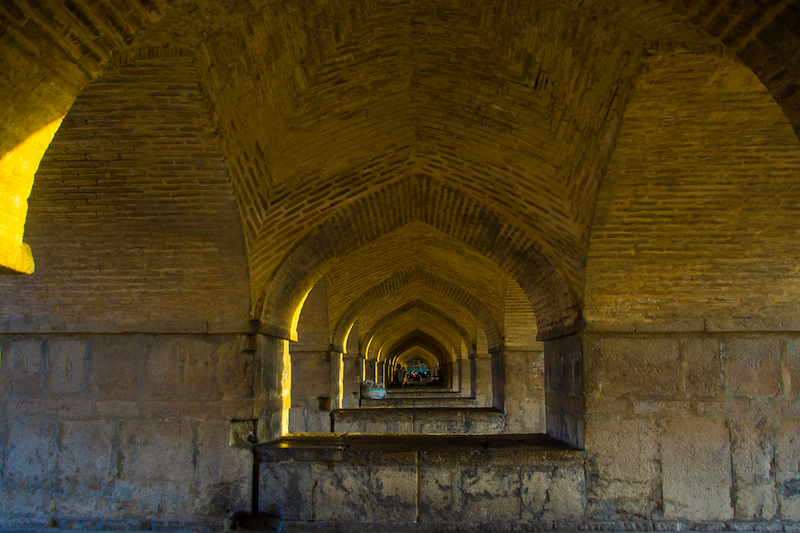 And when the last applause faded, we continued to explore the arched pavilions and I was in awe of the natural light effects. 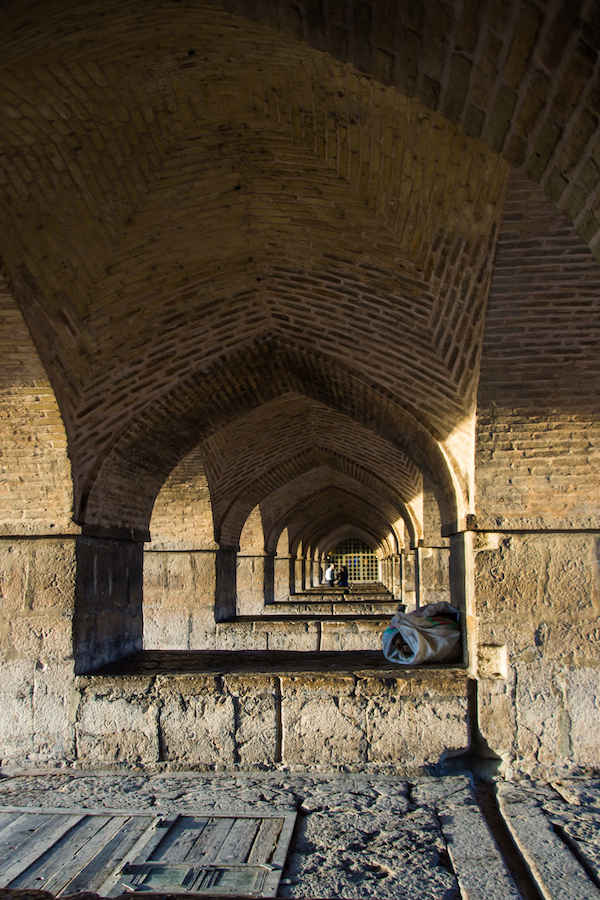 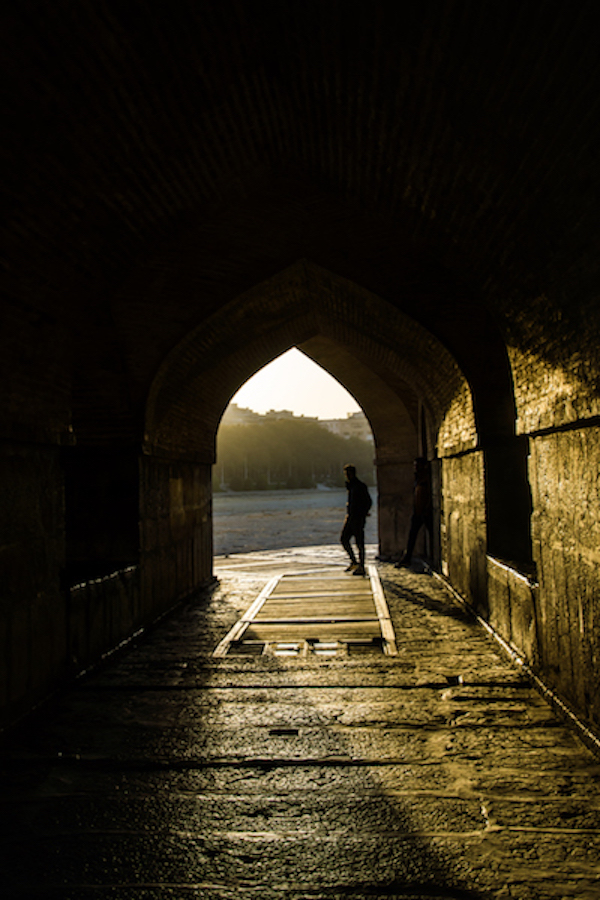 It was time to cross the main pedestrian walkway of the bridge. We reluctantly left the lower floor and as we approached the other side, the religious chants we had also heard on the lower floor got louder. 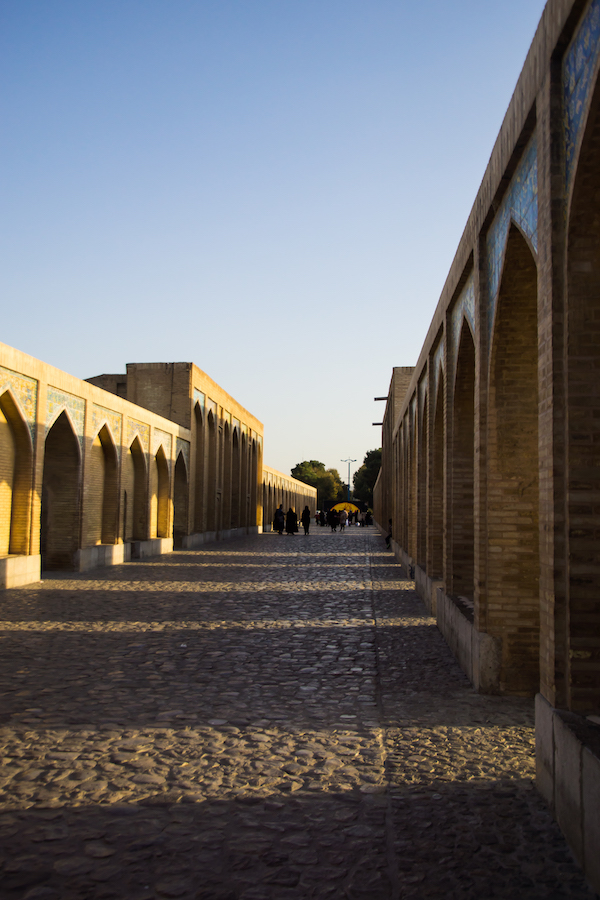 We saw a crowd and what it looked like the end of a religious celebration with free food distribution. With respect we passed the celebration and prepared to say goodbye to the beautiful Khaju bridge. 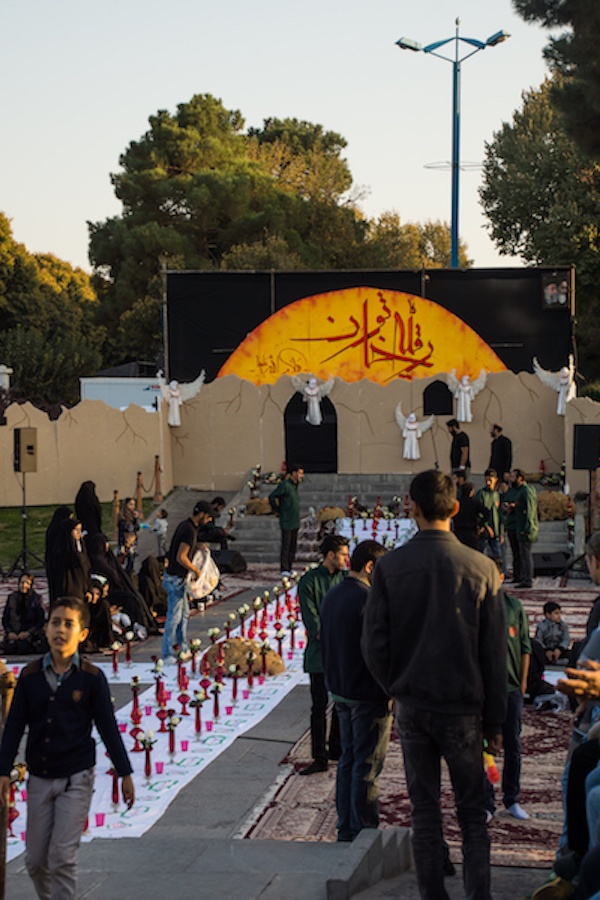 The sun was slowly setting and although there were still people strolling in the promenade and others flying their kites in the sky, families were starting to pack their picnic baskets and carry their sleepy children in their arms. 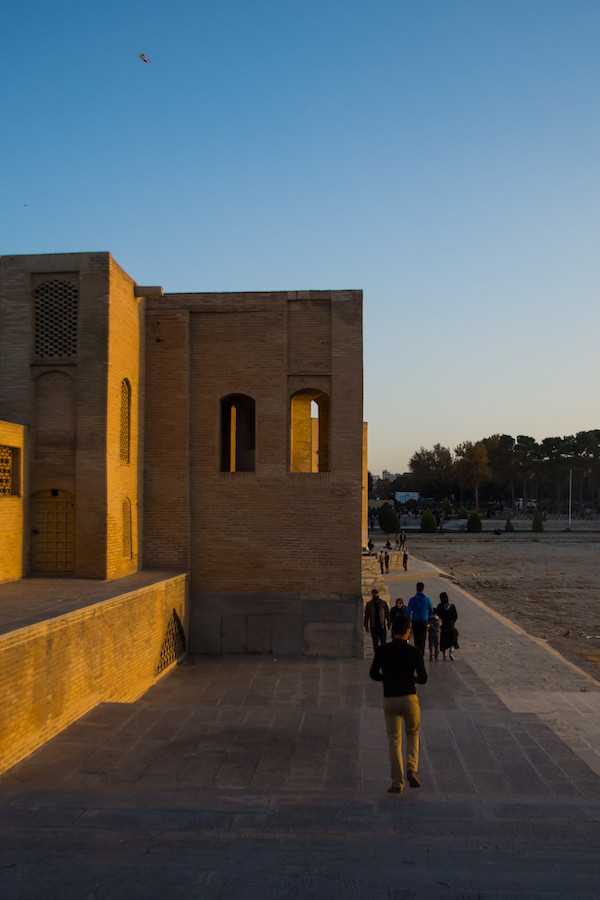 It was time to go. Following the dark path back to the hotel,  illuminated by the last rays of the sun, I was wondering what wonderful secrets we would discover in Isfahan next… 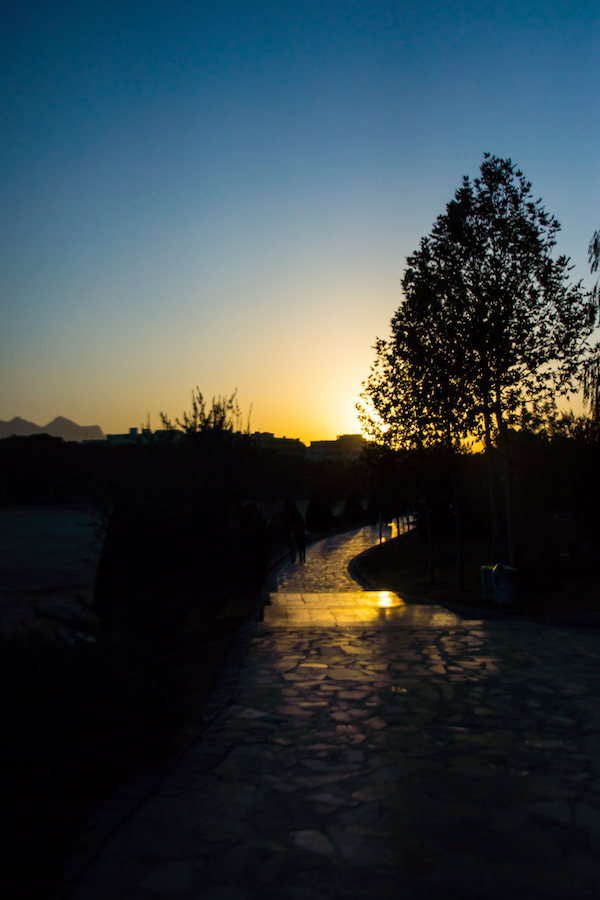