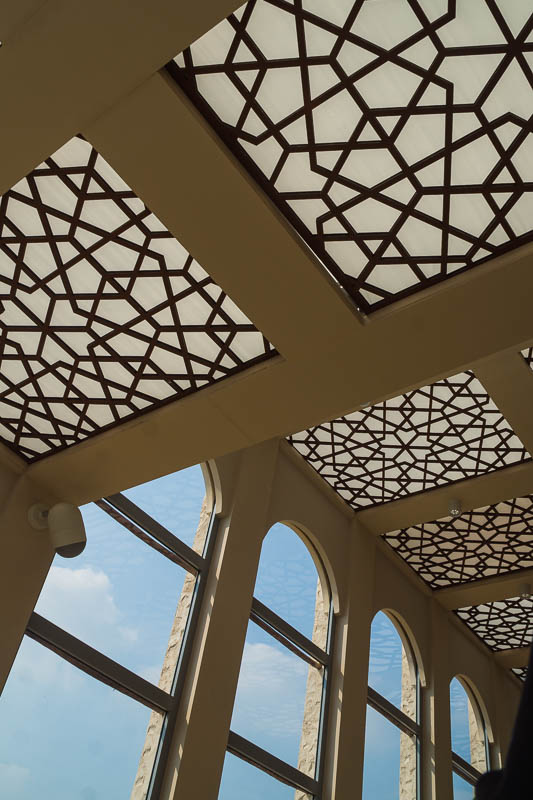 Having lived and travelled extensively in the Middle East but not so much the Maghreb, I was curious about what we would find at The Expo Milano 2015. I was particularly looking forward to follow the scents and spices which always remind me of my travels and wonderful markets I was lucky enough to visit …

We were pleasantly surprised when we entered the Iranian pavilion. It impressed us not only  with the design but also with the display of their culinary offer which we had the pleasure of tasting. Their concept is the Sofreh which is a traditional embroidered cloth used in festive family culinary gatherings in Iran. Here it symbolized Iran’s rich culinary tradition past and present. I have always been curious about Iran and some years ago, while living in the Middle East, I had thought about visiting it. I don’t know if I will ever have the opportunity but it was interesting to get a glimpse into Iran’s regions and their agricultural and culinary diversity. 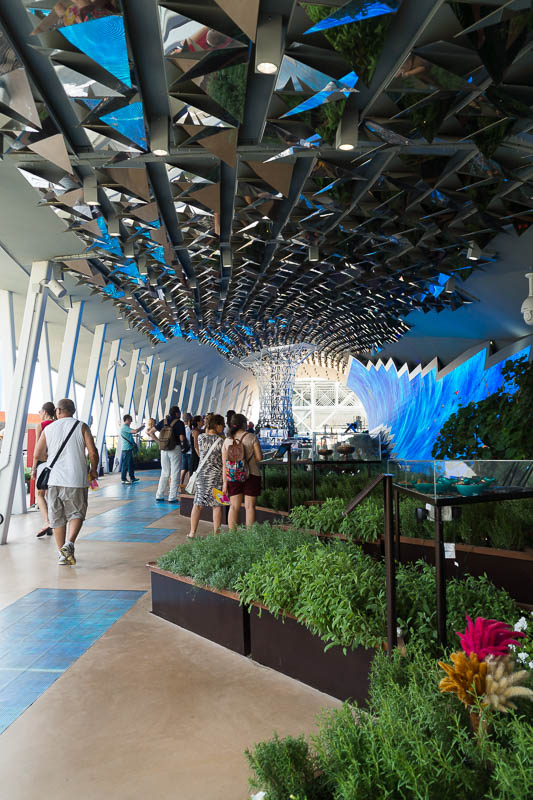 After visiting the pavilion it was nice to sit in their restaurant and enjoy a sample of Iranian dishes. 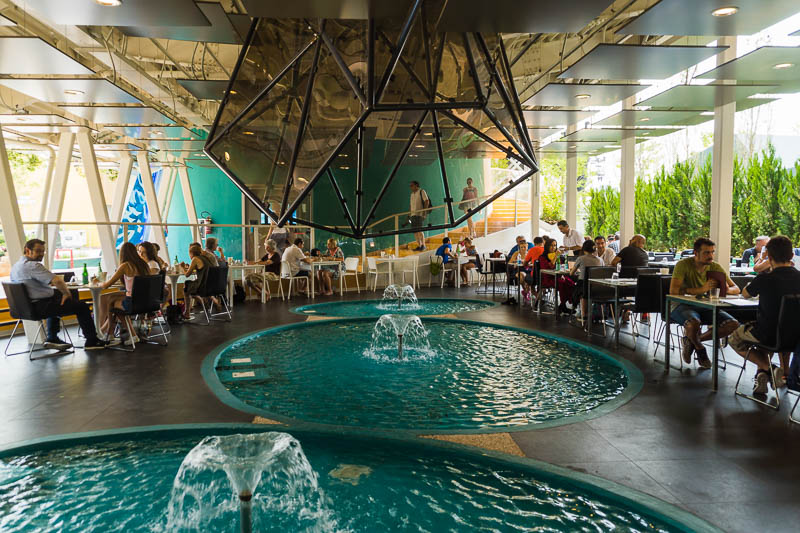 I highly recommend as a dessert the Iranian saffron rice pudding also known as Sholeh Zard. It was heavenly! Before leaving I couldn’t resist buying Iranian saffron and rose petals to use in future recipes. The quality was certainly worth the expense. 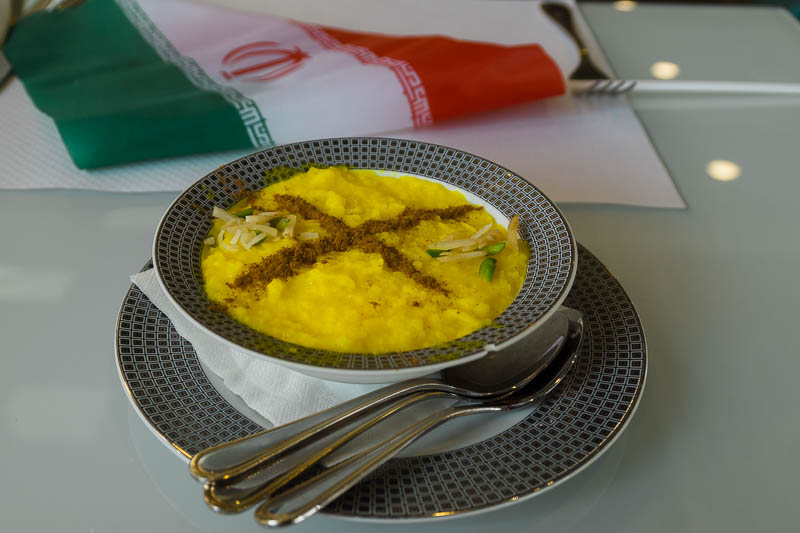 I confess I have never been to the Maghreb. Its proximity to Europe, always convinced me there would be plenty of time to visit one day. And I will of course hopefully soon but in the meantime it was nice to have it so close. In this region Morocco was by far my favorite pavilion. In terms of design, showcasing their culture and culinary traditions it was simply beautiful. I just wish I could have spent even more time exploring! 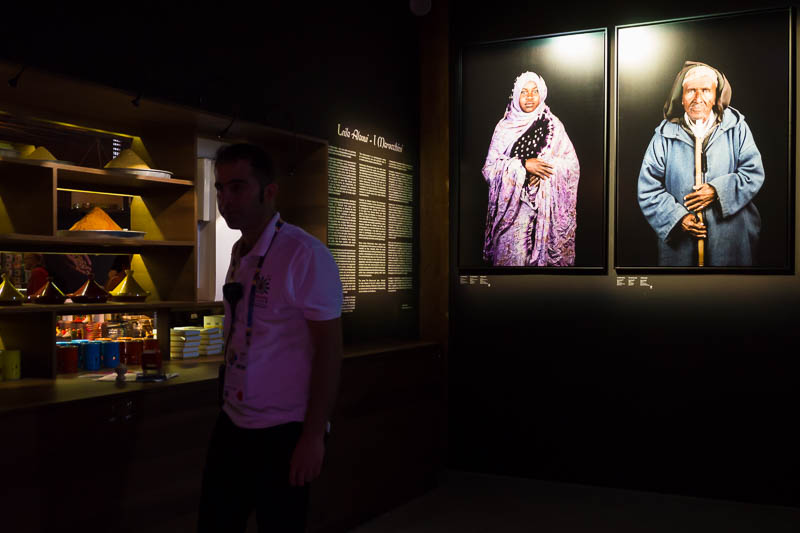 Their concept “Morrocco, a journey of flavors” is creatively presented. By exploring Morocco’s culinary wealth, you are invited to use your senses in a journey of taste and discovery. It was also captivating to learn about Morocco’s culture and regional diversity and visually from the pictures to the presentations it was memorable. 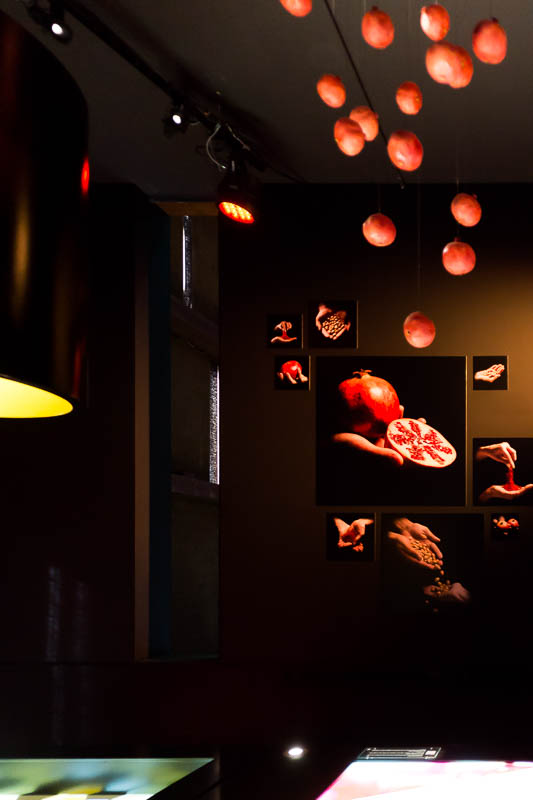 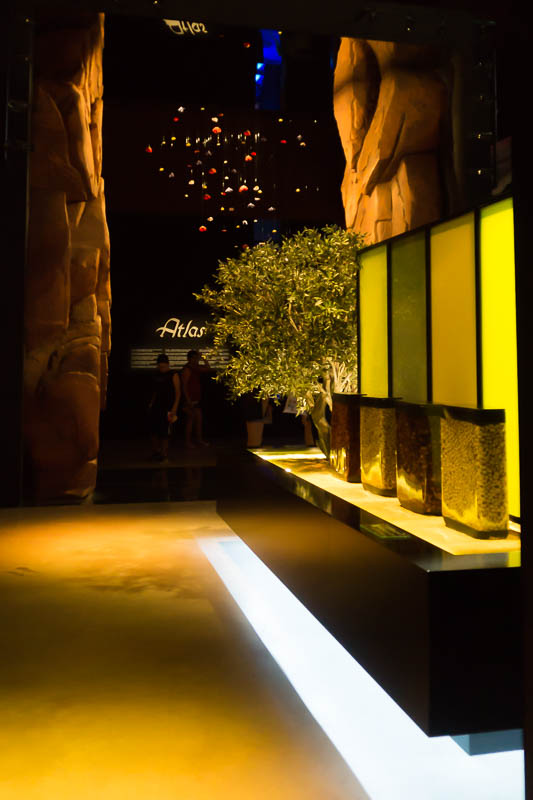 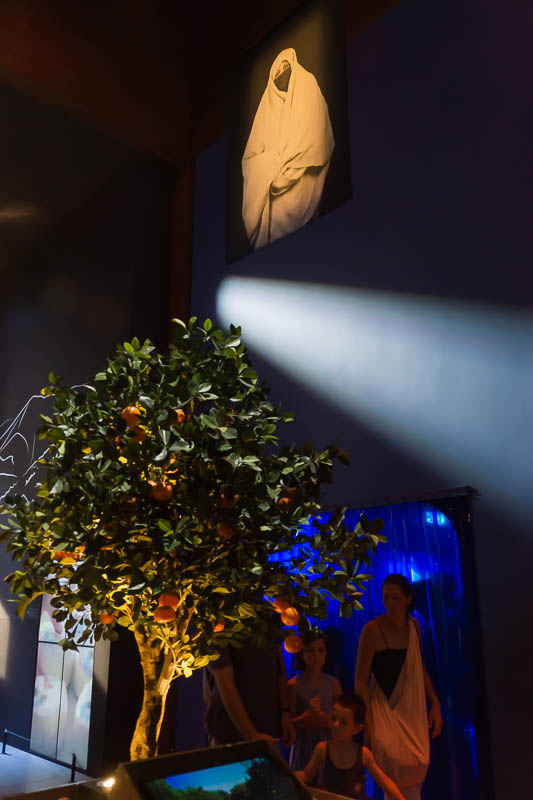 And again at the end you can have a sample of their most famous dishes specially conceived by Chef Moha of the famous restaurant “Dar Moha” in Marrakech. We had a chicken couscous which was delicious. And due to the amount of walking involved at this point, we guiltlessly decided to follow it with an assortment of these very tempting cookies. 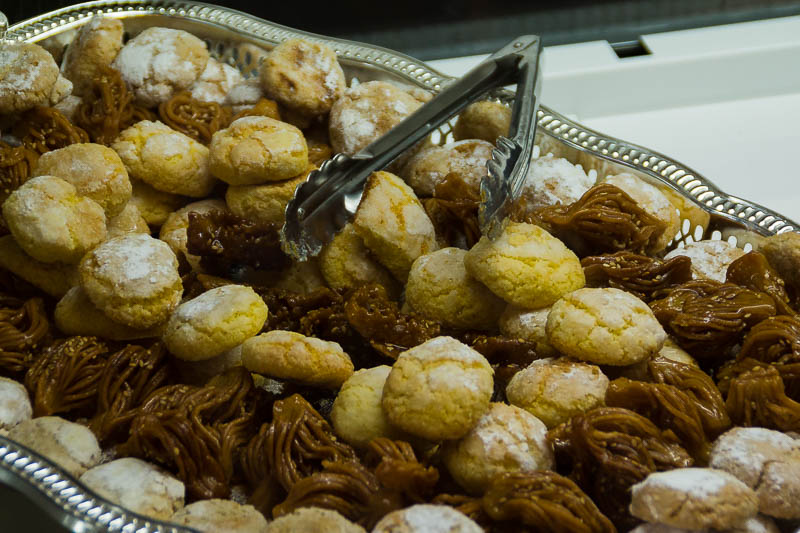 After happily exploring their shop and smelling those wonderful spices, I could not resist buying the Raz el Hannout powder from Marrakech which is a spice blend used in Moroccan dishes like stews and tanginess as well in marinades.

From the Gulf States Qatar was the one that impressed me the most. In terms of architecture, design, culinary traditions and even artisans present showing their skills, Qatar is really worth a visit. Their symbol which inspired the design of the pavilion was the “Al Jefeer” which is a traditional food basket made of palm tree leaves. This was used to keep food, to store it in times of drought and also as a trading vehicle.

When you enter you are greeted by Qatari and foreigners holograms who make a first introduction to the country. Hospitality is very important in Qatari and arab cultures in general as I have experienced when I lived in the Middle East. You learn how guests are welcomed and through an interactive dinning table, about Qatari food traditions and how they have evolved through time. 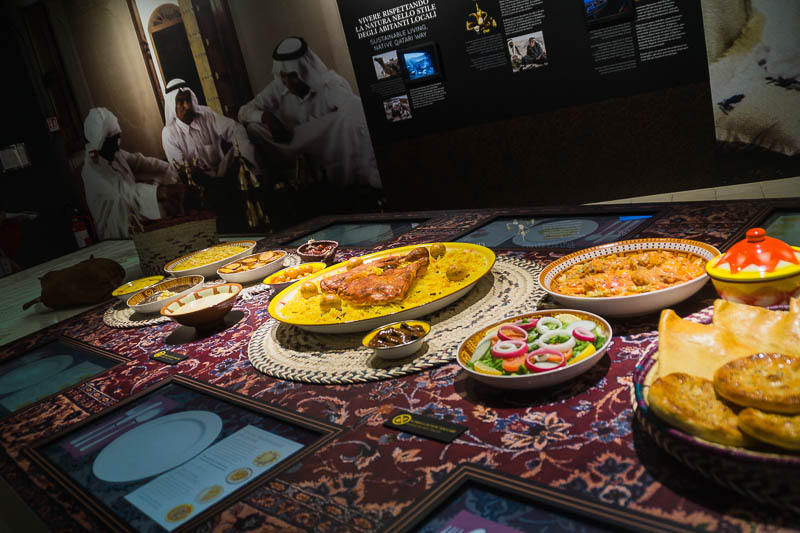 Qatar also presents its solutions for a more sustainable agriculture when coping with desertification and water scarcity by using new technologies.

The very popular souk area was also a favorite. There you get a pick of how Qataris preserve their heritage. Just to give you a few examples, you learn which spices are used in their culinary traditions and what kitchen utensils you may find in a traditional Qatari Kitchen. 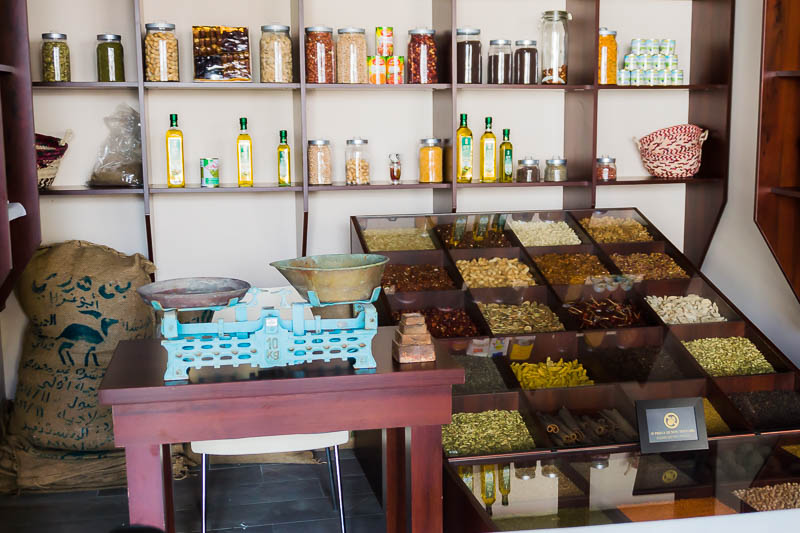 There were also Qatari artisans at work like this one demonstrating the art of the Khoos, the palm frond baskets and other objects. 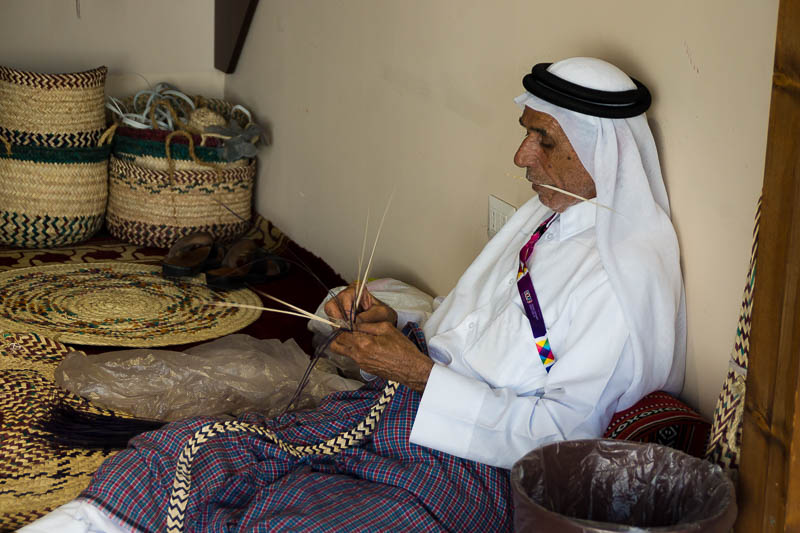 And there were two other crafts which were a big hit when I visited. The henna painting which many women were taking advantage of. 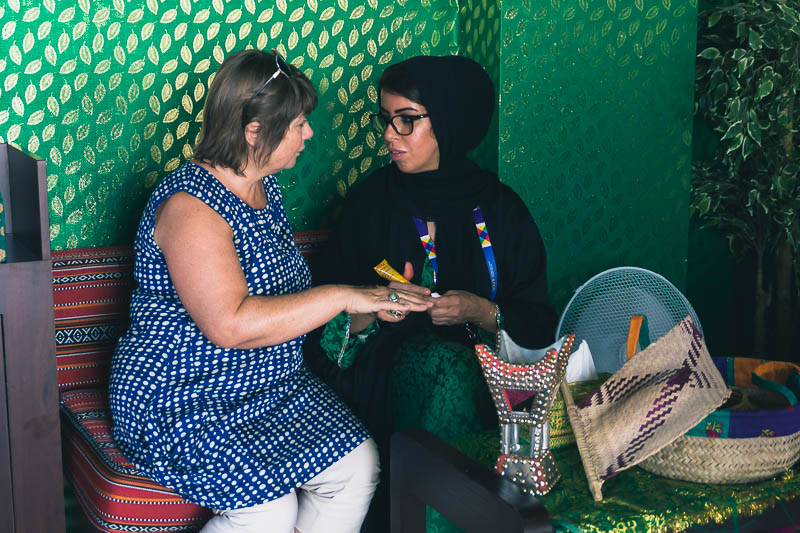 And the possibility of having your name written in Arabic, which had long queues. 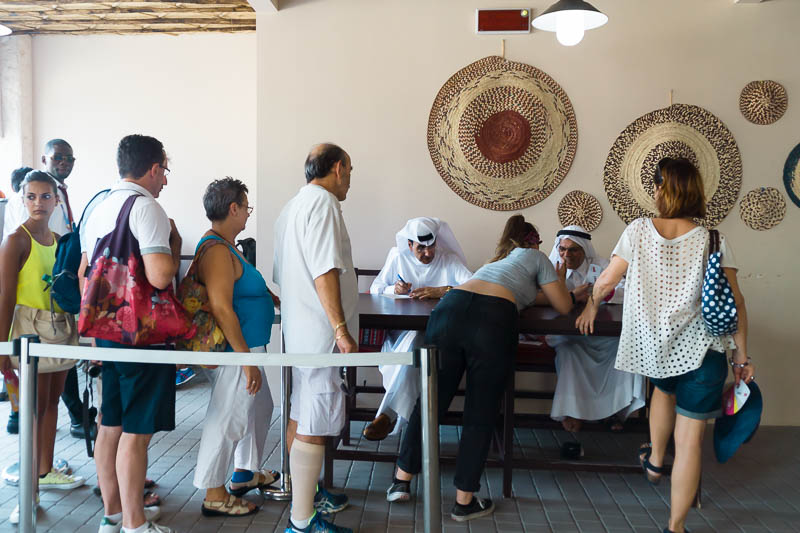 For parents with children there is also a nice children’s activity hall where my daughter spent some time painting.

As I said before, these were my favorites and the ones I would highly recommend but there is much more of the Middle East and Maghreb to explore depending on the time you have. For me it was a way of remembering past landscapes, good friends but also scents and tastes that have become familiar.

You may also want to check my two previous posts where I give you my best tips and other suggestions: