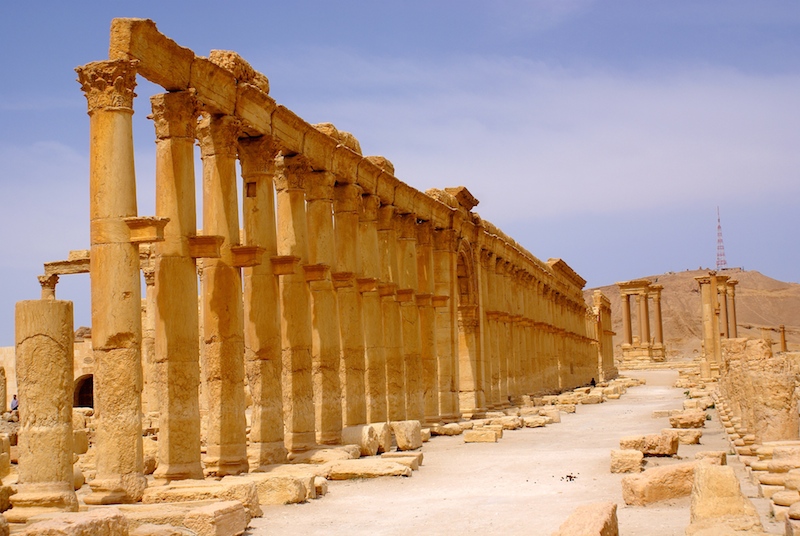 There is nothing sadder than writing about places you can no longer travel to and explore. Ancient places that for centuries stood proudly as proof of man’s ingenuity and determination. Places that are being destroyed before our eyes and all we can do is mourn and watch in dismay.

At the same time I am grateful for having stood in their presence and for having admired their creation in a mist of disbelief and awe.

I remember the day we arrived in Palmyra like it was yesterday. We had driven from Damascus and when we arrived the sun was starting to set. As our hotel was very near the ruins, we decided not to wait and have a first look at Palmyra. We were amazed. Such beauty! There were only a few people around. There was a stillness in the air that I appreciated. A few laughs from the guards here and there but I could just go around in peace. I felt happy. Happy I had arrived and happy I would be able to explore such an ancient place. I could just imagine how it had stood proudly in the past.

That past saw Palmyra initially as a caravan oasis in the desert and later develop into a great city under the rule of the Roman Empire until the 3rd Century AD. Its vital economical role linking the Roman Empire to the trade route with Persia, India and China had a pivotal role in its prosperity and growth. This golden age was also expressed by Palmyra’s monumental architecture in a Greco-Roman style with Persian and local influences present. The Roman rule finally came to an end in the 3rd Century AD after being challenged several times in the past by the local rulers of Palmyra. They went on to create an empire that stretched from Egypt to Turkey. Palmyra changed hands many times, they were often conflicts which contributed to destruction and decline but somehow part of it managed to survive and emerge from the sands of the Syrian desert to our enlightenment and admiration. That is until very recently …

So when I stood at Palmyra paying homage to the past, witnessing the sunset and then rebirth of the moon, I felt how unique that moment was and how lucky my travel companions and I were to be able to be present at that moment. 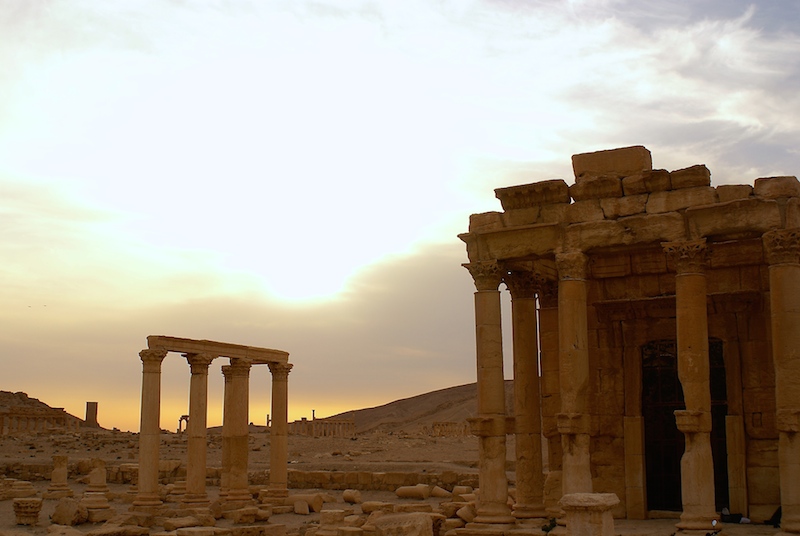 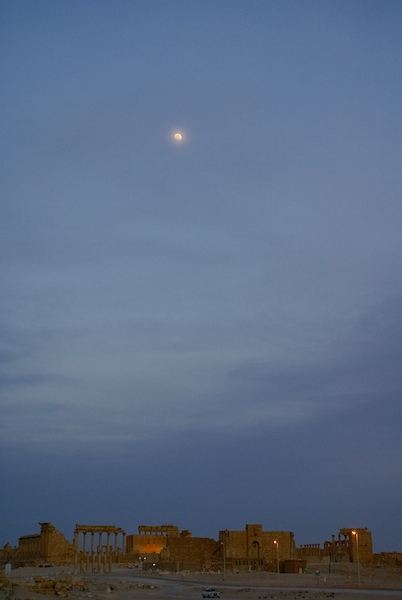 The following day we woke up very early, excited to start exploring the ruins. We headed first for the Fakhr-al-Din castle. A fortress believed to have been initially built by the Mamlucks in the 13th Century. 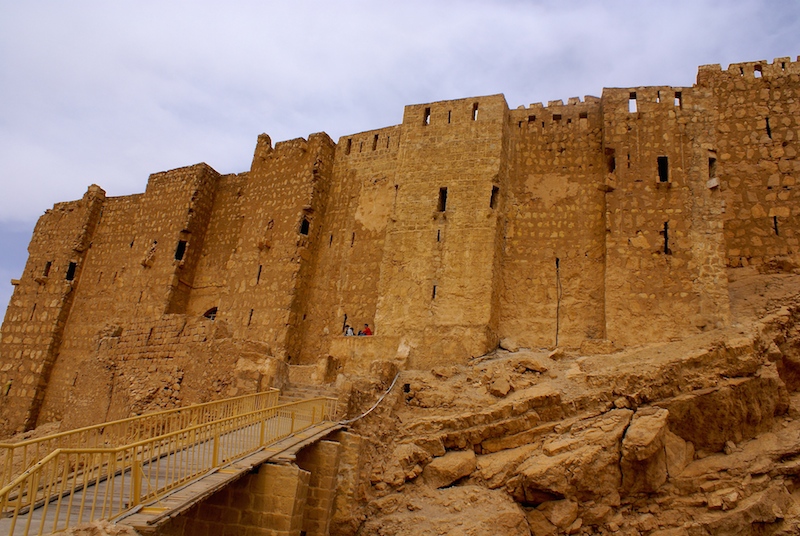 From here you have the most wonderful view of Palmyra and of some of the tombs found near the hills. 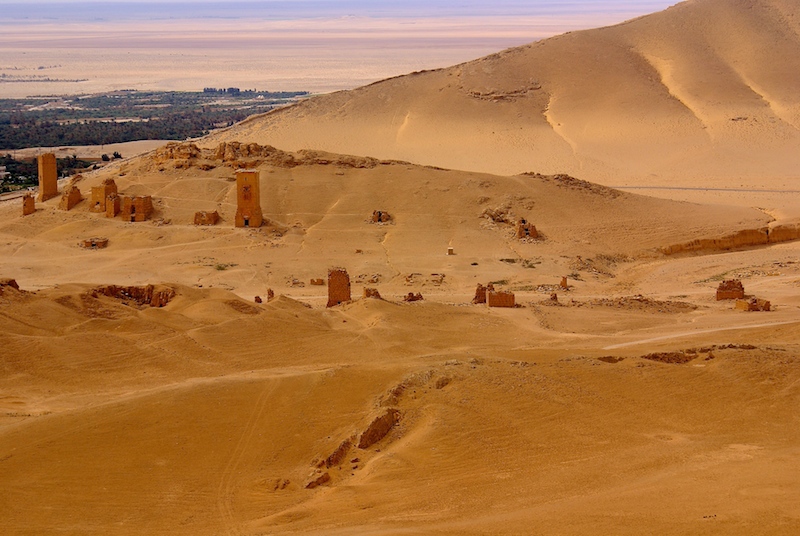 When we finally started exploring the ruins, the architecture, the grandeur and beauty, it is indescribable. From the grand arch before the colonnade 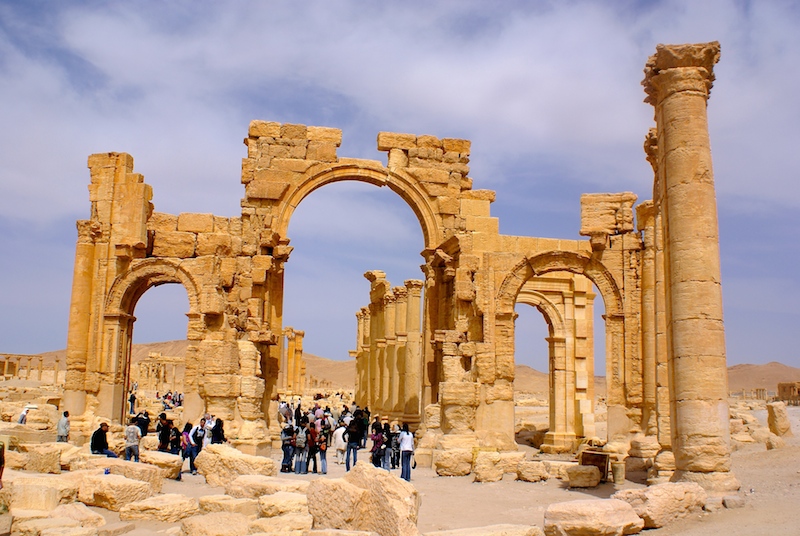 To the impressive Theater. 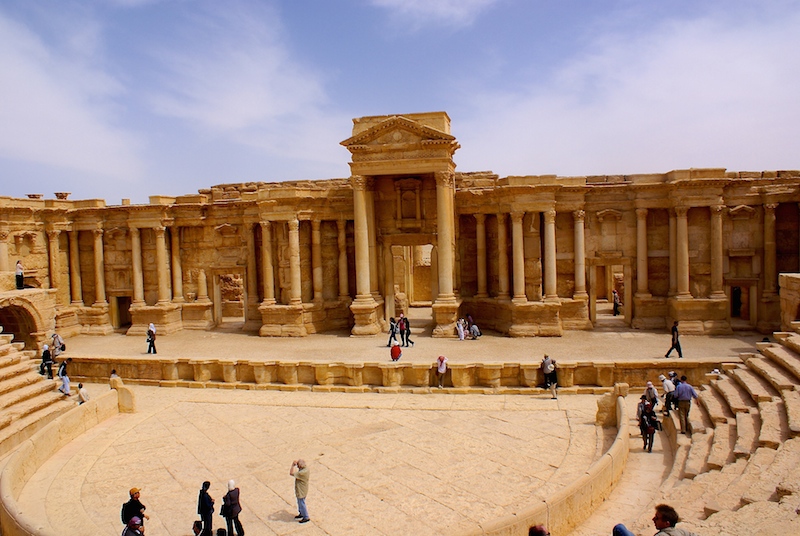 And the Temple of Bel. 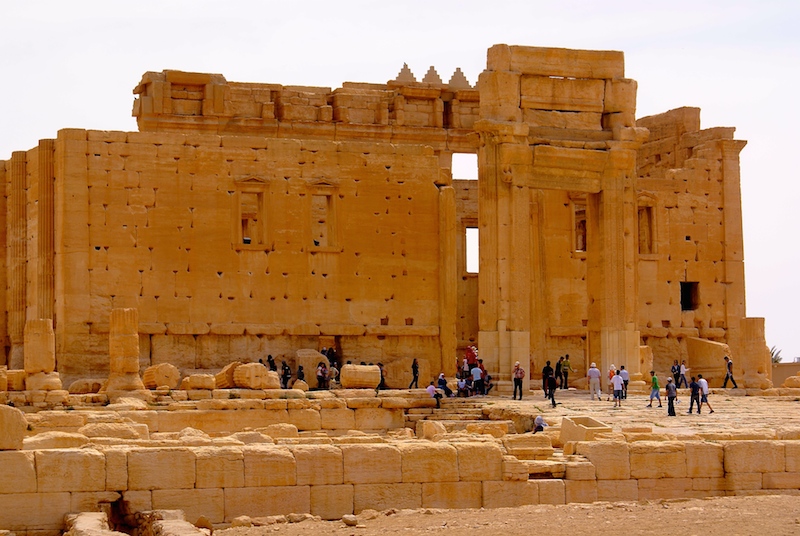 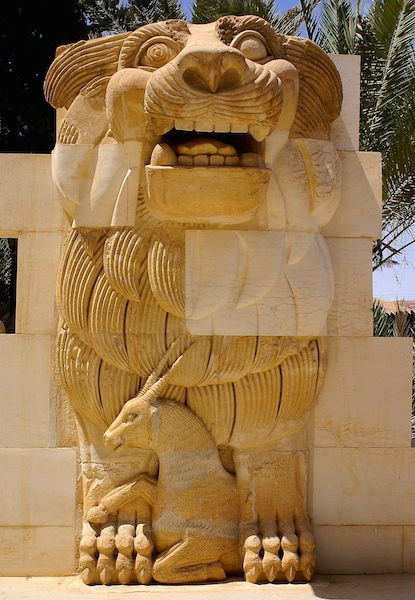 Then you walk in the steps of the ancients along the wonderful colonnade.

And you find the Tetrapylon at a crossroad to other paths. 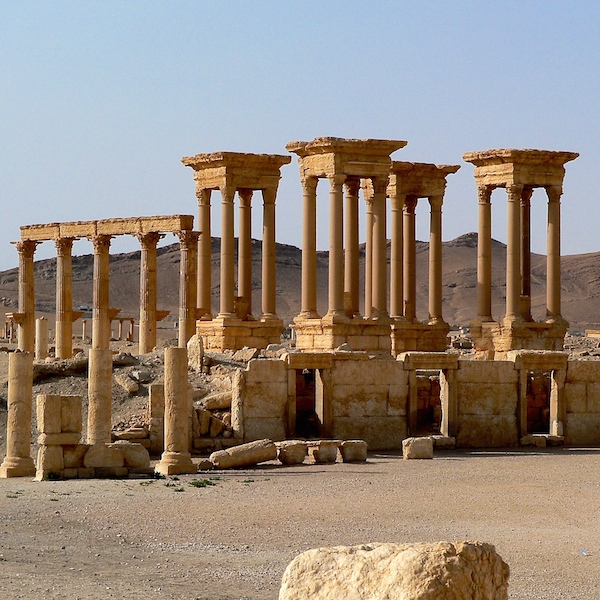 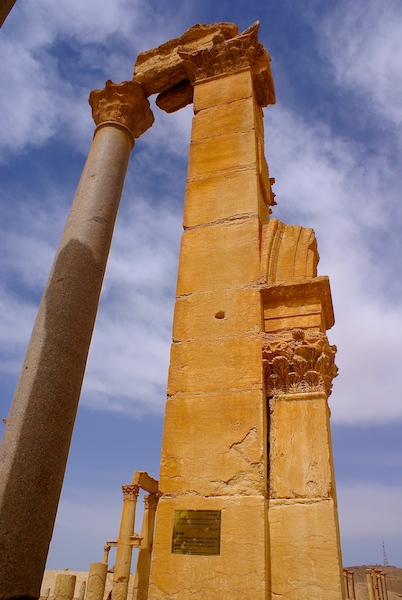 Or the ones found in the tombs 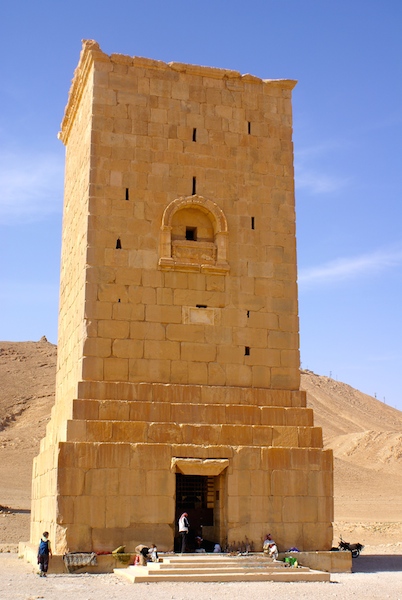 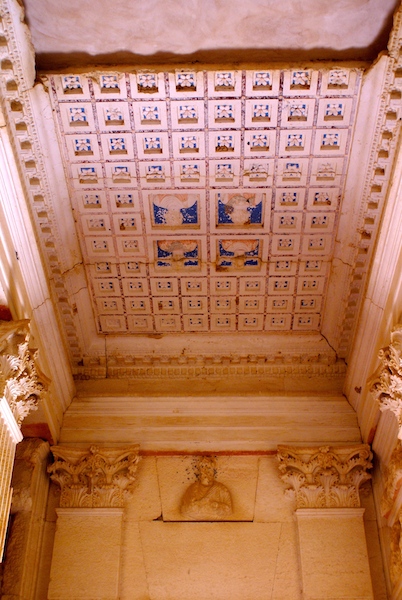 You get overwhelmed by the skill and beauty and you almost wish you could rest for eternity in such a place.

But Palmyra for me was not only about the ruins, the architecture and the past. It was also about the people, the heritage that Syrians preserved and were proud of. This was their legacy. At the time we went, there weren’t that many foreign tourists present. Most visitors were in fact Syrians. Culture has no specific religion. Religion is something at the spiritual level that should be nourished and kept between you and God. Culture is a legacy, something we, the human race, have passed from generation to generation. Something that stands the passing of time and shows the new generations how creative, innovative and resilient we are. An example to follow. Not something to be destroyed.

I also saw many examples of our human spirit present in Palmyra like this camel owner sharing his water with the newest member of the family. 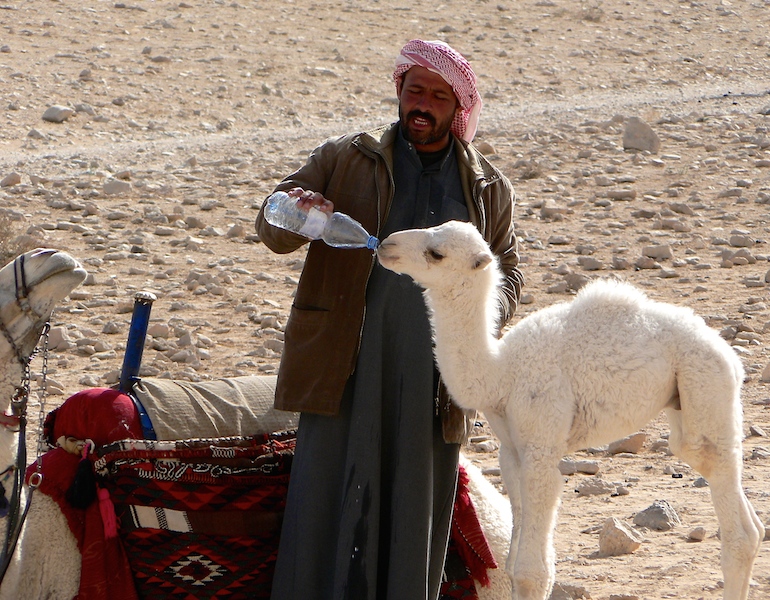 But what I never forgot was this family and these beautiful girls. I had seen them exploring Palmyra with their parents. The sun was going down and before I left I met them again posing for a picture. I could not help myself and took a picture as well. I wanted to freeze that moment forever and remember their happy faces. I often think what happened to them and if they are safe. I also wish I could have introduced them to my daughter who was born two years after that and will never get to see Palmyra the way we visited it. More than anything the terrible cost on human lives is the saddest and although I mourn the beginning of the destruction of a place that belonged to all humanity, I particularly mourn the loss of human lives. 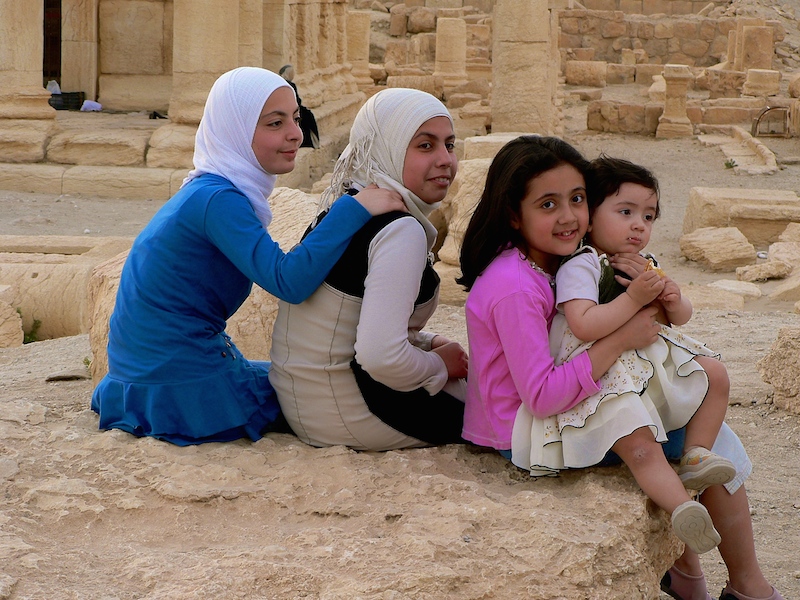 I pay homage to the wonderful Syrian people who can’t be safe but still resist and are still hopeful that one day madness will be defeated and that life and cities can rise from the ashes and be rebuilt once again.

My post was inspired by a BBC piece today on the destruction of some of Palmyra’s statues by ISIS:

And also the photos of Sanaa’s destruction. Having been able to visit Sanaa and Yemen is another reason to be grateful. You can read what I wrote and see the pictures of the city here :

When I compared the pictures with my husband, he expressed the wish of continuing to explore this world while we still can. After all we never know what tomorrow will bring …