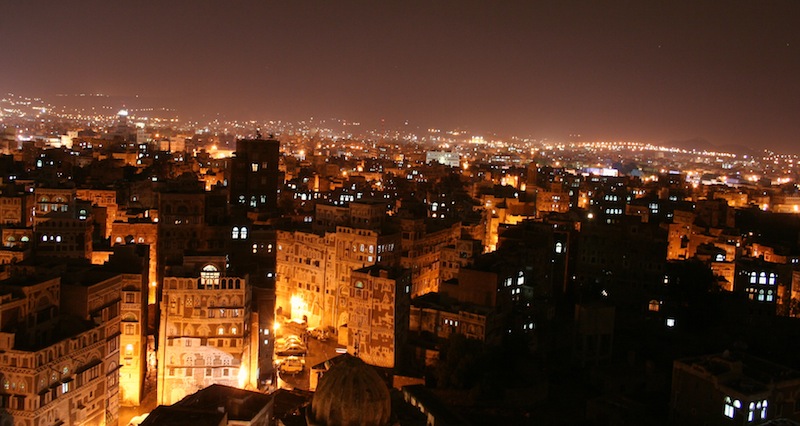 Have you ever experienced getting to a place and suddenly everyone stops talking and stares at you like you were a weird creature from some remote galaxy ? That is exactly how I felt a while back when I landed in the capital of Yemen, Sana’a.

Luck had it that when our plane from Riyadh, Saudi Arabia, landed I was the only foreign woman in sight! I was dressed conservatively and modestly but my head was not covered which attracted a lot of stares. Suddenly, it was like everything stopped and the whole airport stared at me, men, women and children alike. You could have heard a pin drop!

I was with my husband and two friends, so held on to him and tried to look ahead at nothing  in particular but I could feel all the eyes on me! Until I got to the customs officer, I was thinking why I always seemed to get myself in difficult situations by travelling to such countries. However, when we were finally cleared and then had the first glimpses of this amazing city, all my doubts disappeared and I just felt happy for being there.

Our hotel, Burj Al Salam, was right in the center of the old city and it had a charming atmosphere. Its name means tower of peace to reflect the old spirit of the city known for being a refuge of peace. According to legend, the city was founded by the son of Noah and fighting was not permitted inside its walls. The hotel had a great panoramic terrace and this was our first introduction to the city.

So beautiful the old buildings… 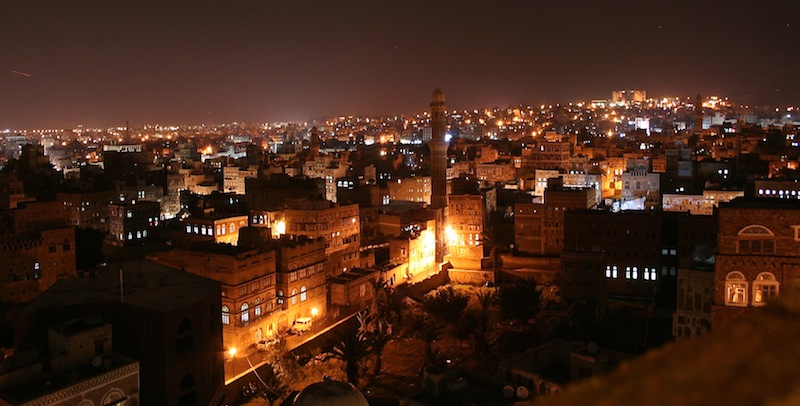 The next morning you wake up to this… 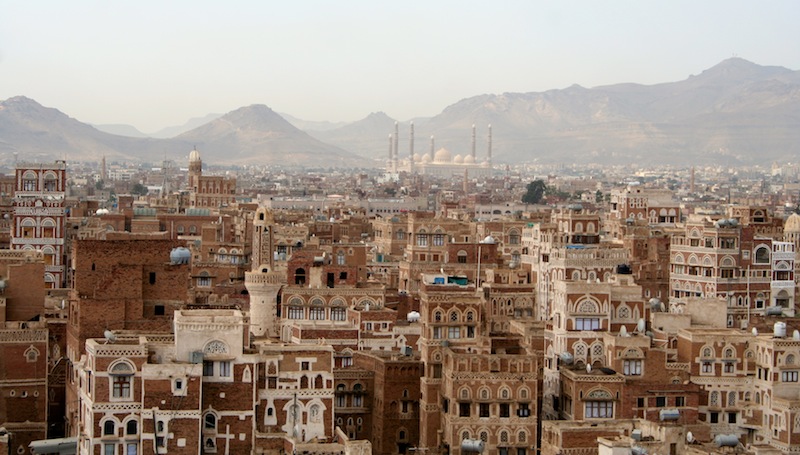 And then it is just impossible to decide which view impresses you the most! 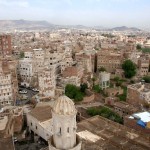 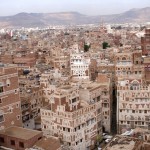 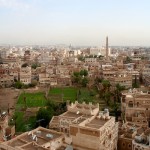 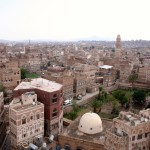 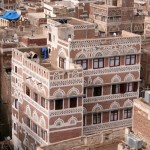 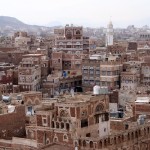 Before we left for the market, they suggested at the hotel we should go and see the famous water channel road.  It was really interesting to see how a water channel can become a road during dry season. You can even see it still had some water left. Yemen suffers from water shortages and it is believed that Sana’a will become the first capital in the world to eventually run out of water.

Most of the problem comes from the production of qat, the famous chewing drug most Yemenis spend most afternoons chewing, if not more. Qat production takes about 40% of the irrigated farming land and hundreds of liters of water are spent just to produce one daily bag of qat, consumed by just one person.

Last year, an anti-qat campaign was initiated by the government after months of pressure from a Yemeni female activist who lives in Lebanon, called Hind Aleryani (article on her campaign). She started a  campaign on Facebook and twitter and managed to push the issue to the national arena once more. Thousand of qat trees have already been uprooted, including this year, but it is hard to know if the government will succeed this time. There have been other campaigns which have failed due to pressures from the groups that control the production and distribution, mainly tribal leaders, military officers and even politicians. 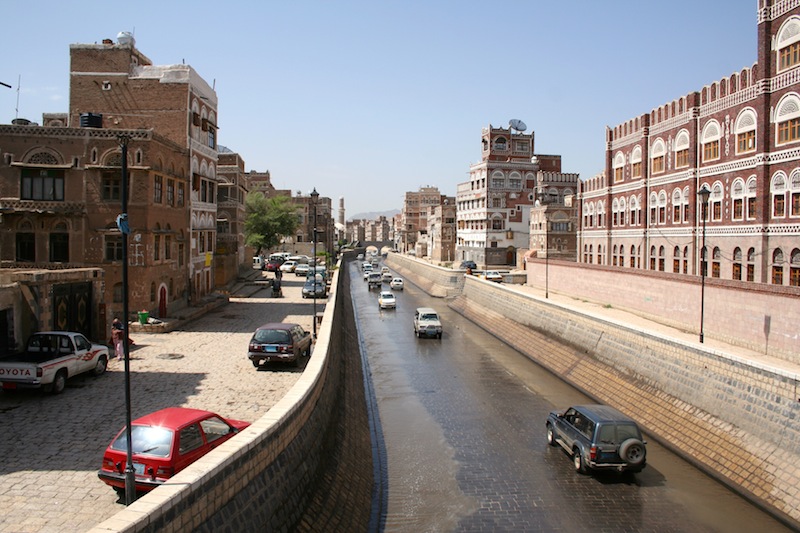 Approaching the main gate to the market we were fascinated to find such a social gathering.  They seemed mostly oblivious to our presence, just concentrated on their exchanges. It was like witnessing something out of another era. In this world we live in, there are few moments like this, when you feel the clock stopped and you feel you can stop too and just take in the moment and keep the memory forever. 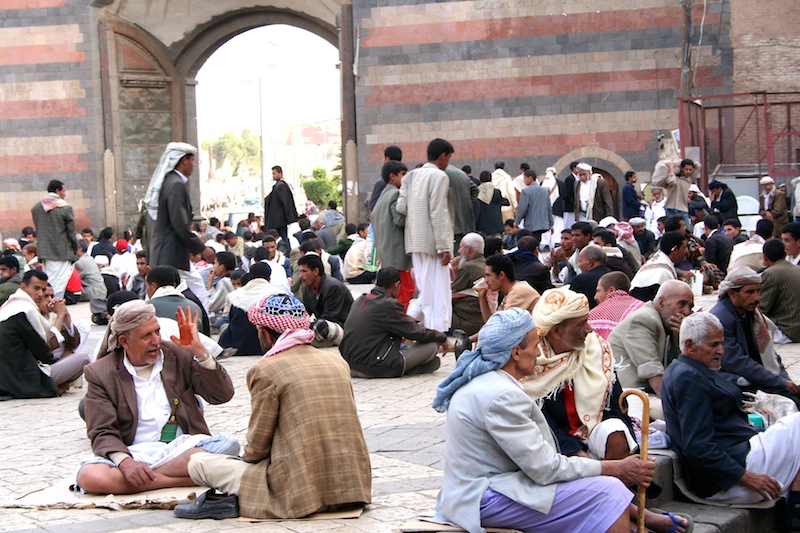 Small vendors sprout a bit everywhere and try to make a living even before you get to the main streets of the market. 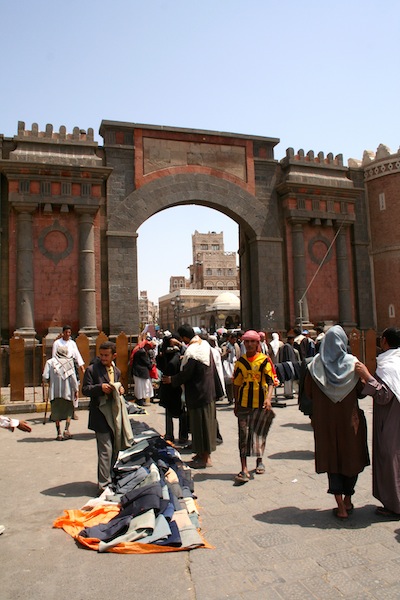 All men in Sana’a wear the famous curved dagger, called the Jambiya, a strong symbol in Yemeni culture. The Jambiya has been worn for thousands of years mainly as a social symbol.

The type of Jambiya and its value shows a man’s power and social class, some reaching millions depending on the material. The price is mostly determined by the handle, the most expensive being made of rhino horn brought from Africa. To avoid the further decrease of the rhino population the government has been trying to encourage the use of a local dark red stone, the garnet. The belt and blade also play a part in the value, the hand-made leather belts embroidered with gold  or silver threads have a higher value. 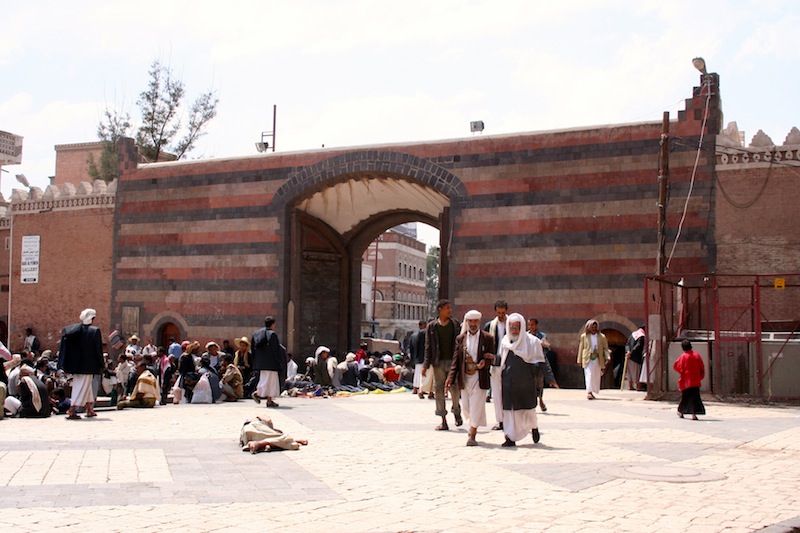 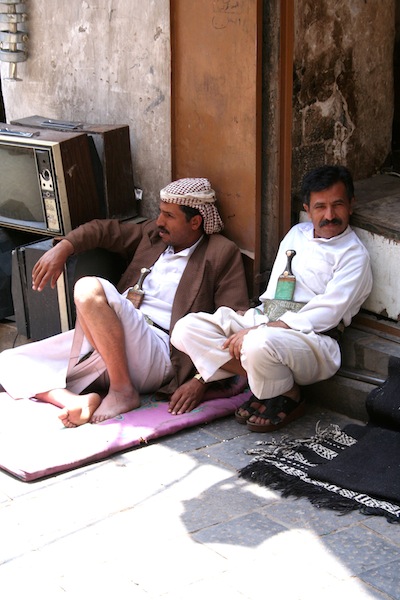 There are also cheaper versions available in the market that are being bought in great numbers by people who don’t have so much money. Believe it or not, they are made in China and most of the handles are made of plastic although they can look like the real thing. It is only when you get closer and look at it properly, that you realize what they really are. 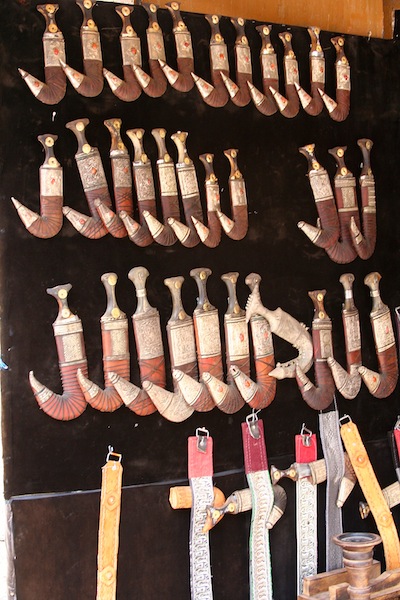 The market in the morning was always bustling with activity and many people. You can really feel the pulse of the city by walking in the market. 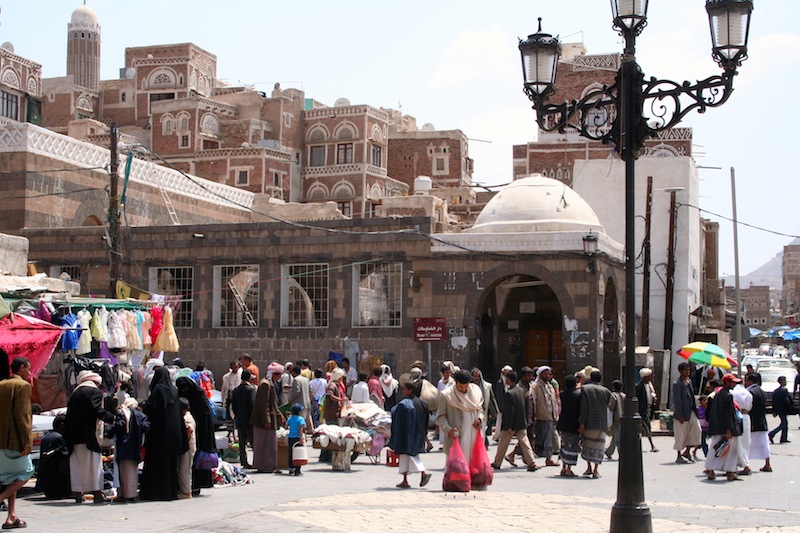 There were so many handicrafts to explore, the basketry was beautiful, the woodwork special, the silverware had intricate motifs and the fabrics were fine with appealing colors. 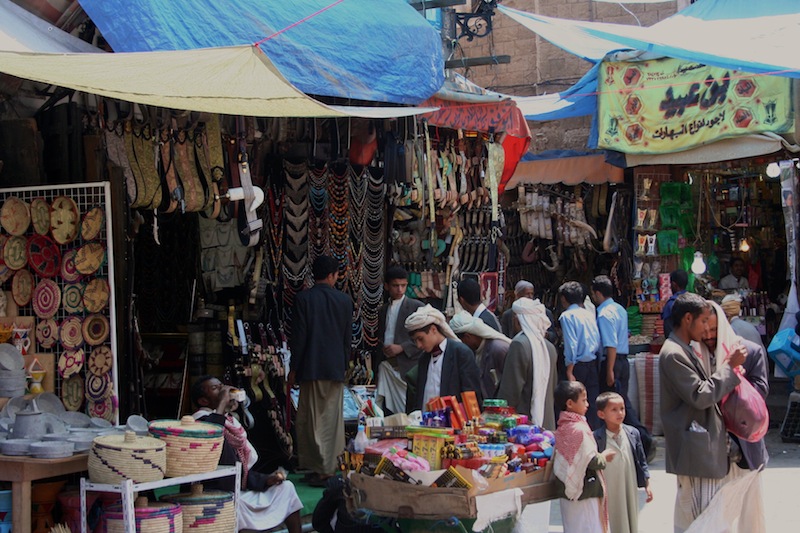 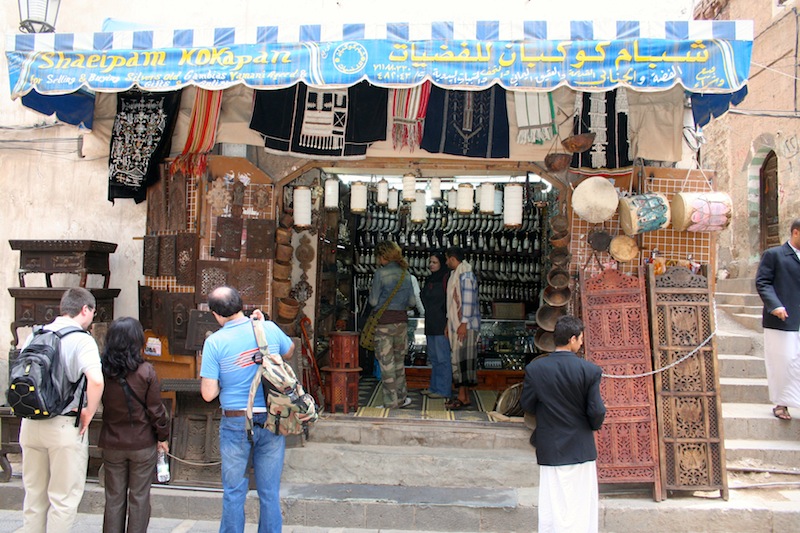 We were naive for thinking that we would get better prices if we went shopping later in the afternoon. This because you can see the effect of the qat in their gaze and posture after they have been chewing for a long time. We would try to offer a much lower prize but although they looked a bit out, they would just smile and tell us to try again! The Yemenis are really hard negotiators, even small children! Once we went to a shop where we found two small beautiful little girls, about 8 to 10 years old. We asked for their parents and they just smiled and told us they were eating but we could negotiate with them. They were so hard I had to admire their skills, their parents must be very proud!

These are just some of the streets in the market we visited, I particular enjoyed the spices section. Spent a lot of time smelling, choosing and negotiating to the point of tiring my male companions! Unfortunately, I have no pictures since they asked not to be photographed which we respected. 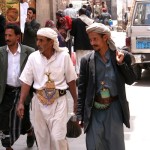 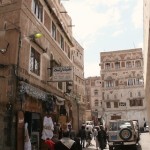 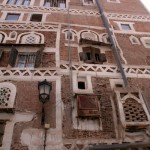 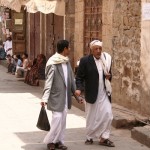 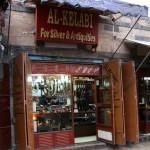 Although you have all this activity around you, there is always a place where two old friends can meet and have a private conversation. This is one of my favourite pictures, can’t explain why but it touches me. 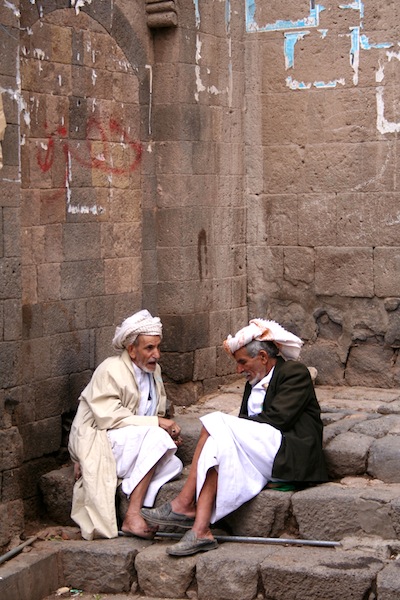 I have to say that during the four days we spent in Yemen, we were mostly well treated. Many times we were even surprised by the friendly approach of people in the streets. They would stop us and ask us from where we were from. Every time we answered they would welcome us to their country. Several times we were also offered guidance when we looked a bit lost and always with great politeness. Children were always sweet and curious.

The only time we felt threatened was after friday prayers. We were hearing the rhetoric of one of the imams and although we could not understand much, we heard the name Amerika (America) many times. When they came out of the mosque and saw us passing we could feel many looks of hatred towards us. We felt at that point that it would be safer to go back to the hotel. You should always use caution and listen to your instincts when you travel to difficult places.

At the moment, I wouldn’t advise anybody to visit Yemen, there have been kidnappings of foreign nationals and although the situation seems to be more stable, it is still not safe. It is a pity though as this is a fascinating country.