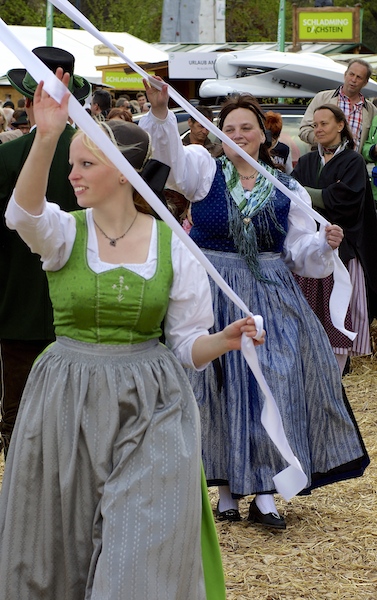 Spring is here and May felt like a promising month to start learning more about Austrian Spring Traditions.

Nature is in full bloom. It has renewed itself once more and there is new life all around. Winter is a closed chapter, forgotten and not missed. It was a rather difficult chapter this year. New country, new life and having to relearn new routines. Your body takes time to adjust to the cold, new viruses and reappearance of old allergies. It will adjust, it always does.

Coming from Portugal, May is the month when we celebrate all mothers, in particular, Mary, the mother of Jesus. But before Christianity, the beginning of May was marked by pagan rituals and celebrations. These were made in honor of mother nature and its regeneration.

The Roman goddess Maia, goddess of fertility, was celebrated in May. In this part of Europe, beginning of May was also chosen by the Celts for the festival of Beltane. It was a festival that celebrated the first signs of spring. The rituals concentrated on the desire for a period of fertility and abundance. The celebrations started on April 30 with the lighting of bonfires, followed by the raising of a tree on May 1. Other fertility rituals were also performed at this time.

When Christianity emerged and became the official religion of the Roman Empire in the 4th century, the Church condemned these practices as heresy and tried to eliminate them. April 30 started to be associated with the night of the Witches. In spite of the threats of excommunication, persecution or burning, the Church was met with resistance. We can’t forget that it took at least three centuries to convert most of Europe to Christianity.

Secretly some of the rituals were still being performed. April 30 became known as the night when the witches converged at the Brocken, the highest peak of the Harz Mountains in Germany. It was an annual meeting to celebrate the beginning of spring. As was the case with many ancient pagan practices, some were adapted or transformed by the Church into Christian celebrations.

The night of the witches became Walpurgisnacht, the eve of the feast of Saint Walpurga. She was a 8th century English abbess in Germany known for her healing abilities. Her brother, the famous St. Boniface played an important role in the evangelization of Germany. Although she is celebrated in February, she was canonized on May 1.

Pagan practice, local folklore or Christian feast, I believe elements of the three are still present in these celebrations. What makes it a beautiful tradition is the celebration and welcoming of spring with the hope of new fruitful beginnings.

The Walpurgisnacht on April 30 with the lighting of bonfires and the Maypole raising on May 1, are traditions that are still very much alive in Austria. These traditions are particularly strong in the villages. These are also traditions kept in much of central and northern Europe.

The Maypole marks therefore the beginning of spring and in some villages is preceded by a procession. Fortunately for me, I did not have to go far to witness this wonderful celebration. It took place right in the heart of Vienna at the City Hall. It was during the Styrian weekend where this important region showcased their traditions and gastronomy.

When I arrived there was already a joyful, bustling atmosphere. The brass band that is always present during the Maypole  raising, was playing a preview of what was to come. 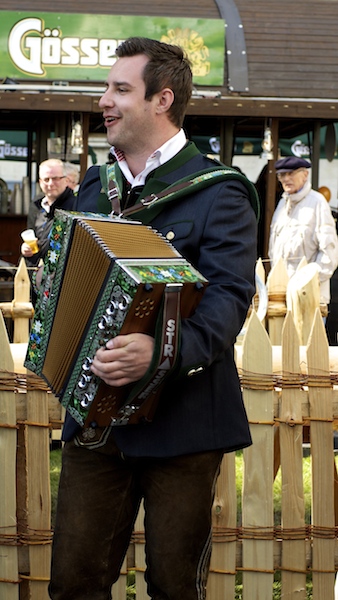 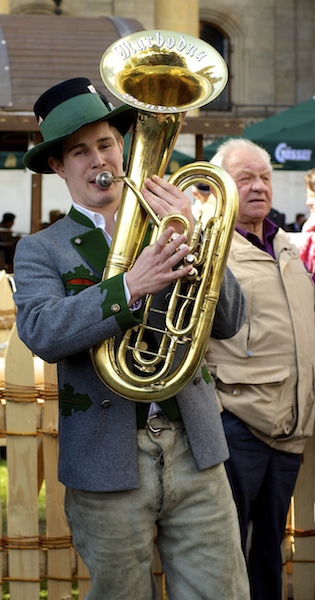 The dancers happily swirled to the music giving us a little taste of what was to follow. 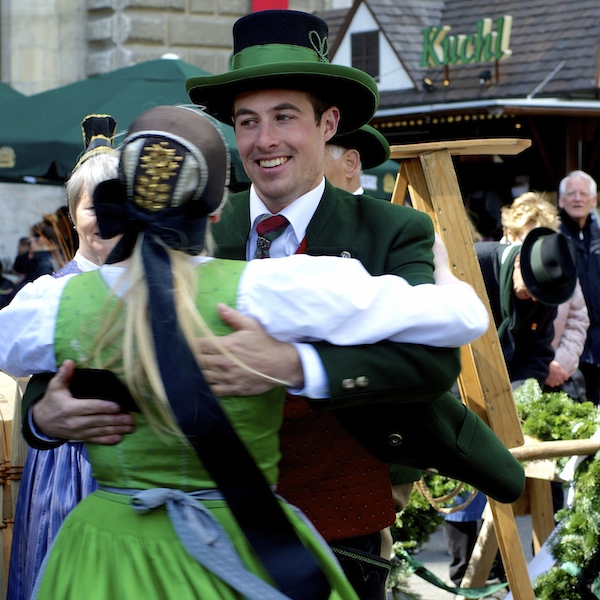 Then the time came to prepare and take the pole to be erected. The pole is usually a young spruce or fir tree which also displays often a wreath and other decorations. 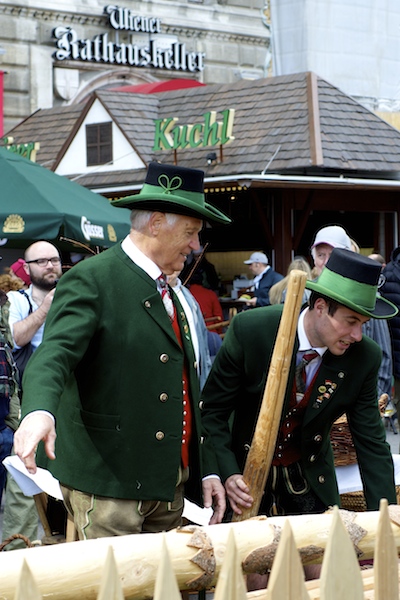 Along go the ribbons which will become part of the first dance once secured to the pole. 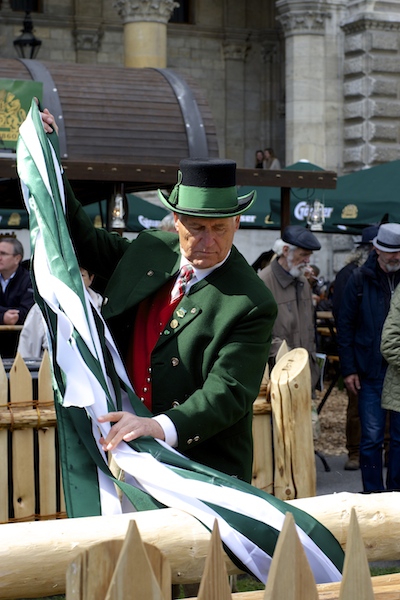 Everything is ready, the procession takes form. There is laughter and excitement. Part of the group carries the poles that will be used to help raise the Maypole 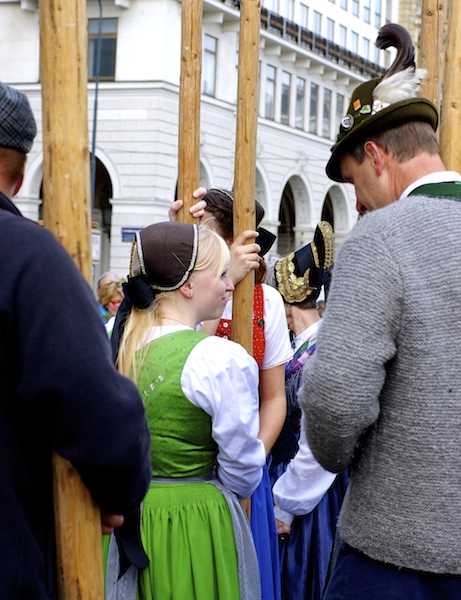 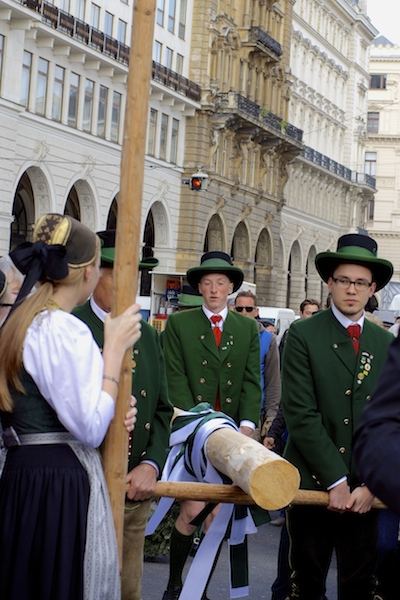 It may look easy to raise the pole with the help of the other poles but it is actually quite challenging. It takes time, strength and above everything skill. 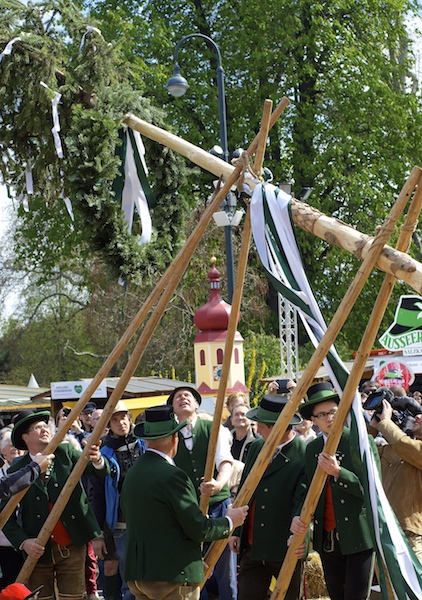 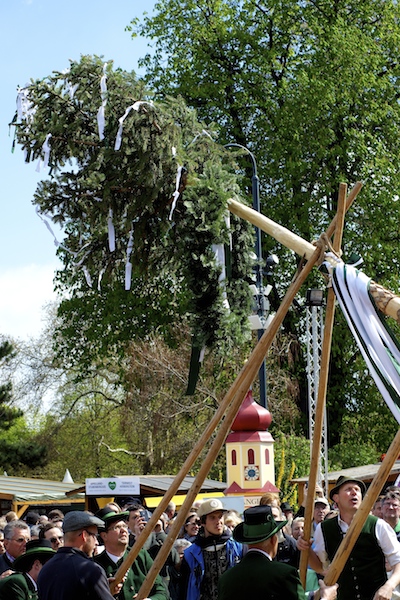 Once the pole is erect among strong applause, it is time to spread the ribbons for the dance 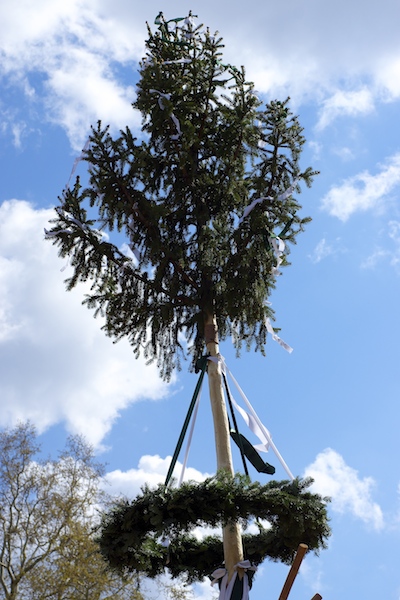 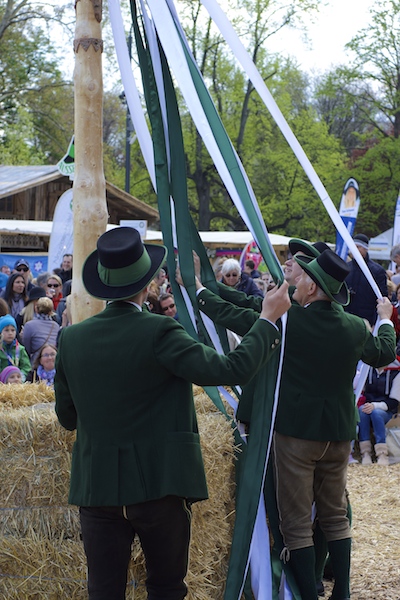 And finally we can be merry, enjoy the music, the beautiful dancing and celebrate. May we all have a fruitful, happy spring! 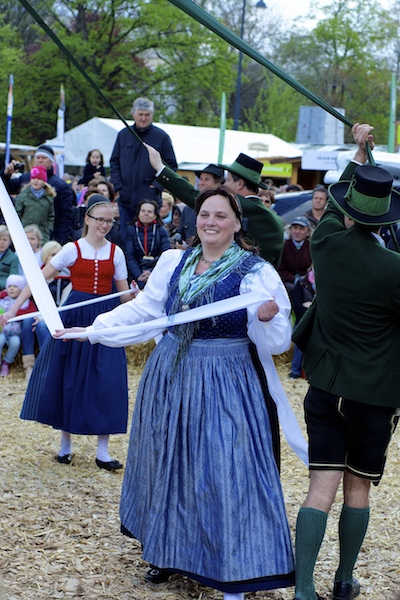