Hit enter to search or ESC to close
Travel

Four years ago, a month after arriving in Mexico, I attended my first Independence Day and witnessed the famous “Grito”. It is an emotional occasion for all Mexicans. After all, it commemorates the start of the Mexican war for independence, that freed the country from Spanish rule 203 years ago.

In the early 19th century, the priest Miguel Hidalgo had been conspiring with others to revolt against the Spanish elites and ultimately gain independence. This revolt was to take place on October 1, 1810. However, the conspiracy was uncovered and  Hidalgo had to act fast in order to save the movement. On September 16, 1810, in the small city of Dolores near Guanajuato, he summoned his congregation by ordering one of the church bells to be rung. He then made a passionate speech to the people, encouraging everyone to join the movement and revolt against oppression. Nobody knows his exacts words, but the strength of his speech and passionate appeal has since then been called the “Grito” or shout. Hidalgo managed to gain much support and raise an initial army of 40.000 people. The revolt soon spread to other parts of Mexico and finally led to independence after 10 years of a hard fought war. Hidalgo would be executed in 1811 but he was never forgotten and is considered the father of the nation and the first leader of the war for Independence.

Since this day marked the beginning of the fight for Independence for Mexico, it was chosen as the national day. The same 203 year old bell used by Hidalgo is still rung each year on the night of September 15 by the President of Mexico around 11 p.m. He then gives praise to every hero of the revolution, by mentioning their names and ends up with an emotional Viva Mexico! Viva Mexico! Viva Mexico! Long live Mexico!

It is wonderful to see the crowd that gathers every year at the zocalo, the main square in Mexico City. Whole families come to commemorate and participate in the festivities. There is a lively, happy atmosphere. There are food stalls everywhere with a great variety of traditional Mexican “fast food” (antojitos). The delicious smell of chiles, meat, different types of tortillas and sweets intoxicate you in a good way. This is not the time to worry about your weight, it is a time to celebrate. The pride to be Mexican is evident. It is a happy occasion and even with rain, 70.000 people attended this year.

I wanted to be present for a final time since this marks the beginning of our last year in Mexico. I have mentioned in other posts, that I will deeply miss this country and the wonderful people I met here that have become true family to us. So when the President shouted Viva Mexico, I also shouted back with the crowd for the last time, my own last “grito”! Viva Mexico!!! 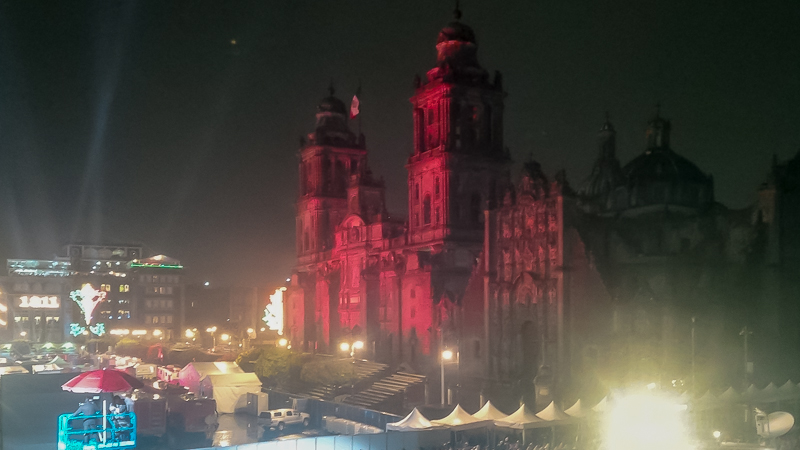