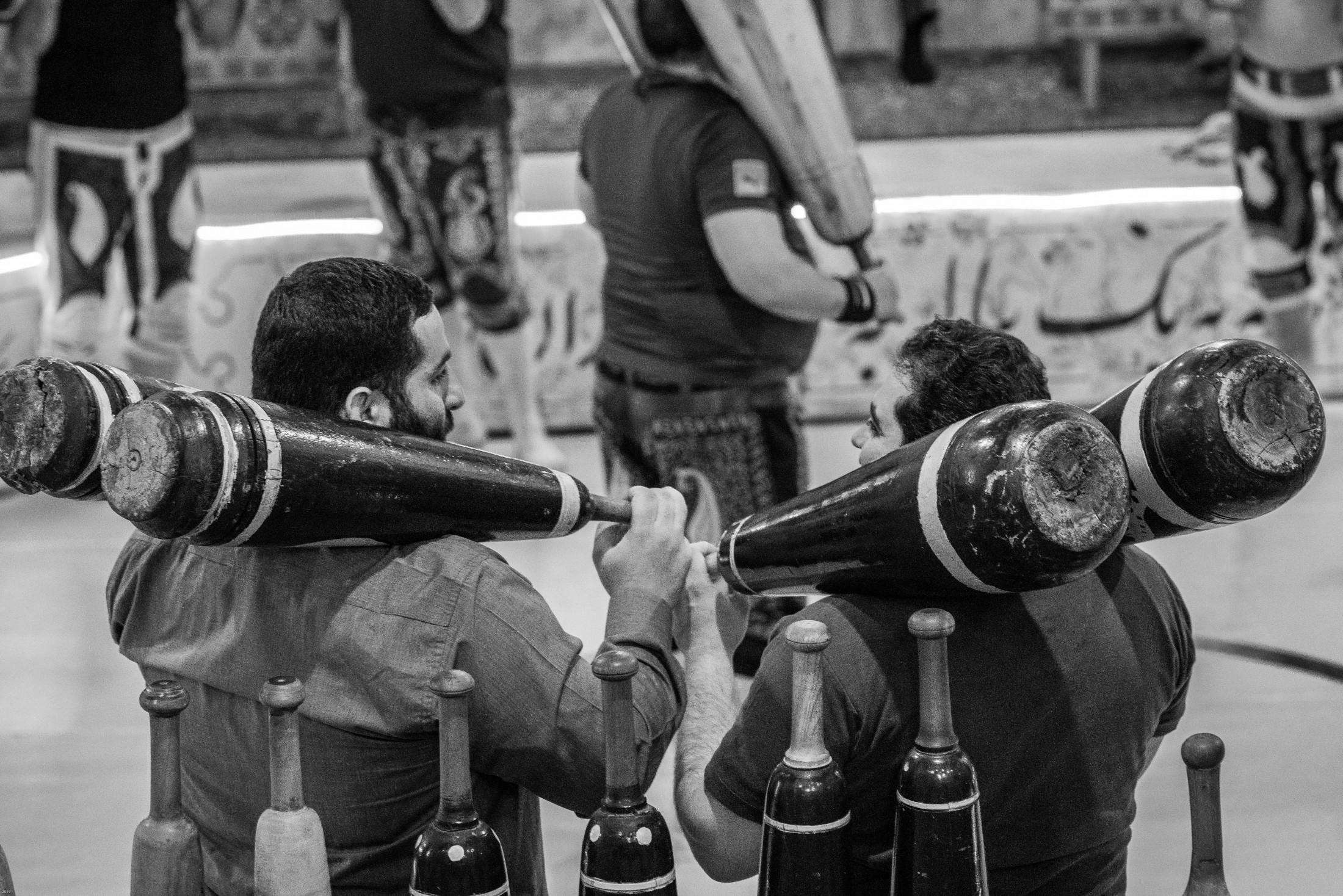 Zoorkhaneh or House of Strength

It was early evening when I arrived at the Zoorkhaneh or House of Strength. The men were gradually arriving, by the entrance you could see the shoes in a disorganized line. Before you enter a Zoorkhaneh you must take your shoes off as a sign of respect.

Women are not a usually sight at the Zoorkhaneh, this being a sport solely practiced by men, so I was grateful that sometimes exceptions are made and we get invited to watch. Used to train warriors in ancient Persia, this sort of training is still practiced to this day in Iran. This fusion between athletics and spirituality comprises certain Pre Islamic rituals and Islamic and Sufi values. The first Shia Imam, Ali is considered the patron of the sport as an example of courage and sacrifice.

Men that practice this ancient sport are expected to be strong physically but also to practice ethical values like modesty, charity and purity. When we entered, there were men already dressed sitting, awaiting the rest of the group. Above were the pictures of their predecessors, a reminder of their strength and prowess to inspire their successors. 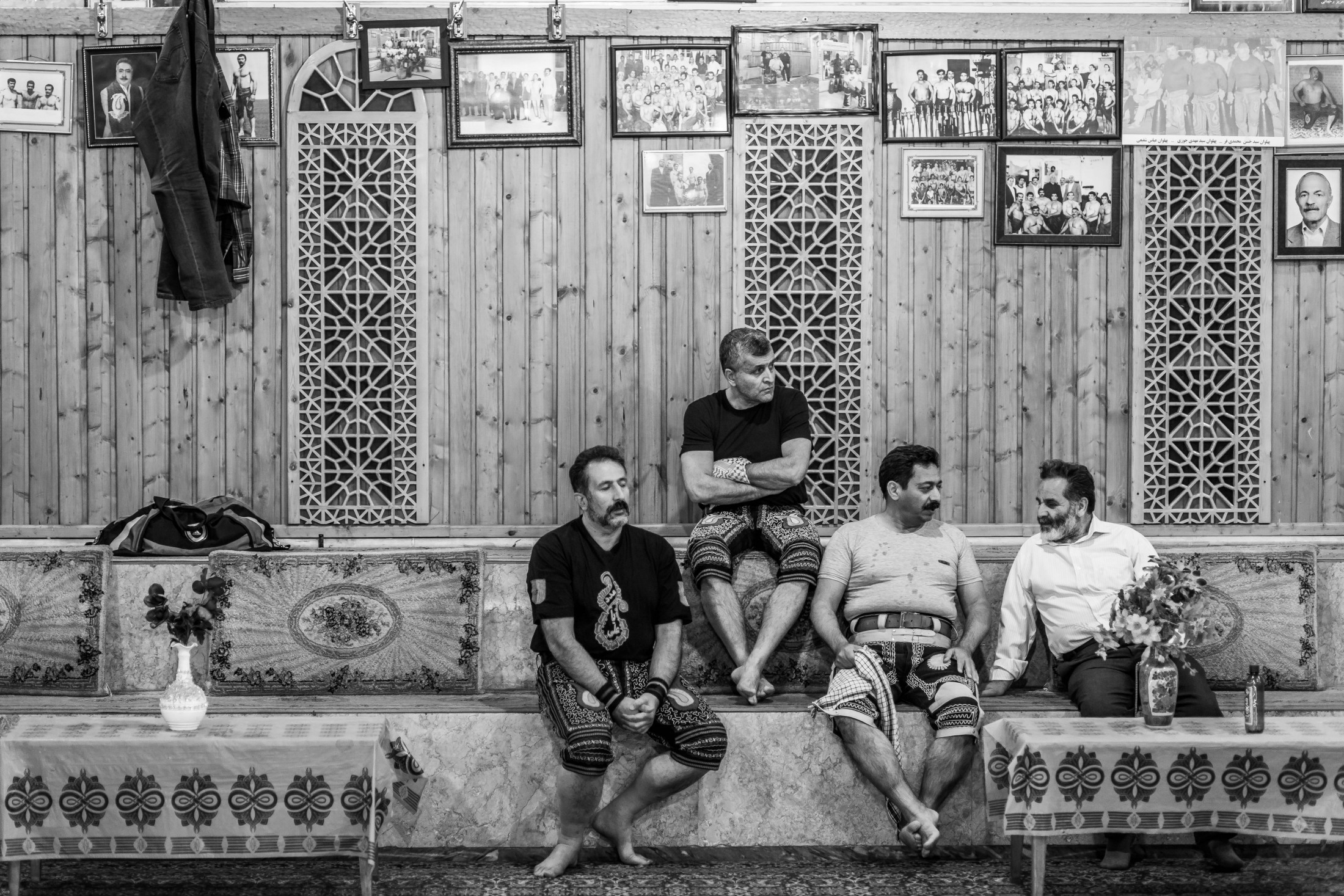 The Zoorkhaneh makes no distinction between classes, everyone is equal and everyone can join. But there is usual a period of a month where those who want to join will observe from the audience until they are accepted into the group.

I looked around and saw that some men were warming up with some of the traditional equipment like in this case the Sangs resembling wooden shields. These can weigh up to 80 kg each. 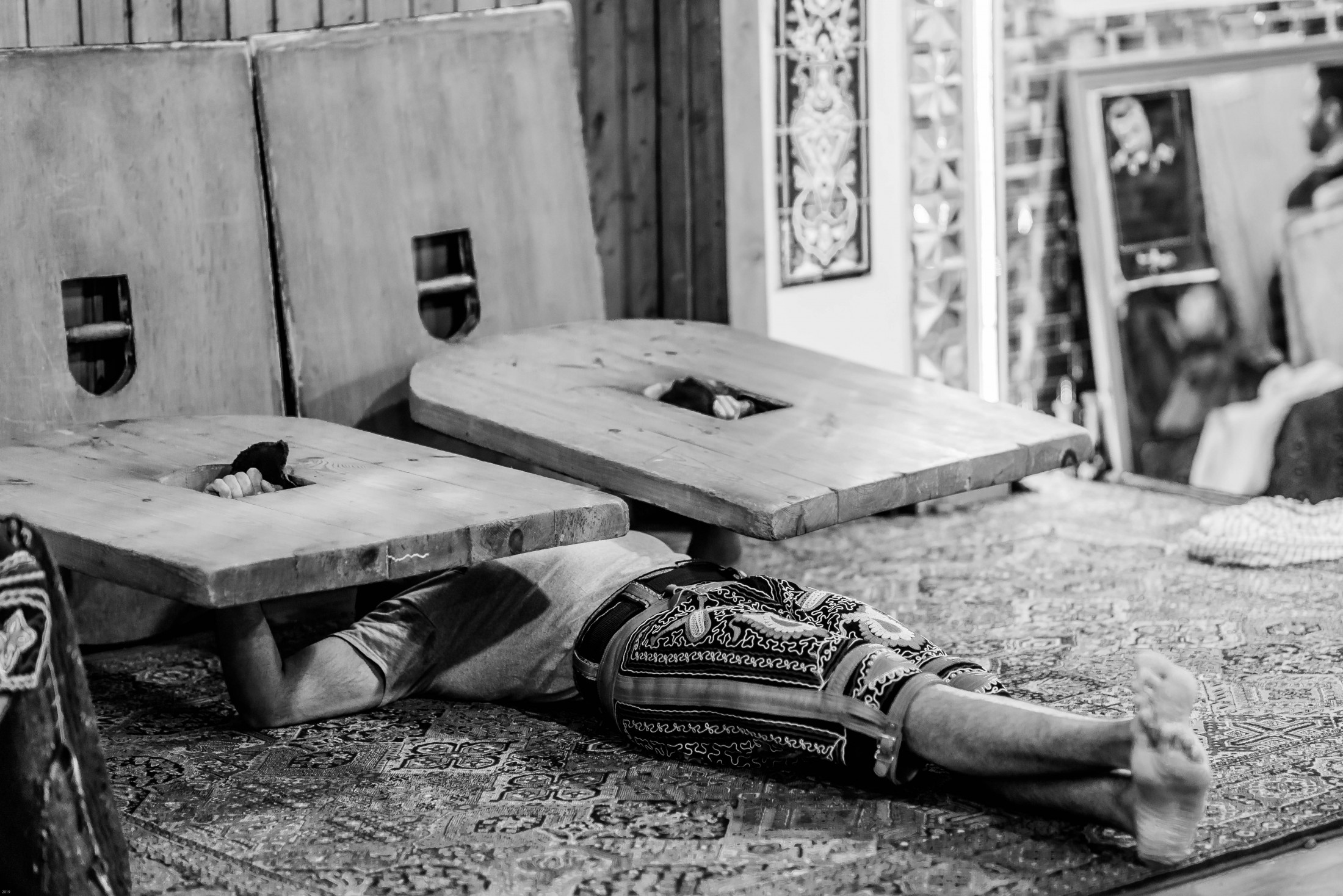 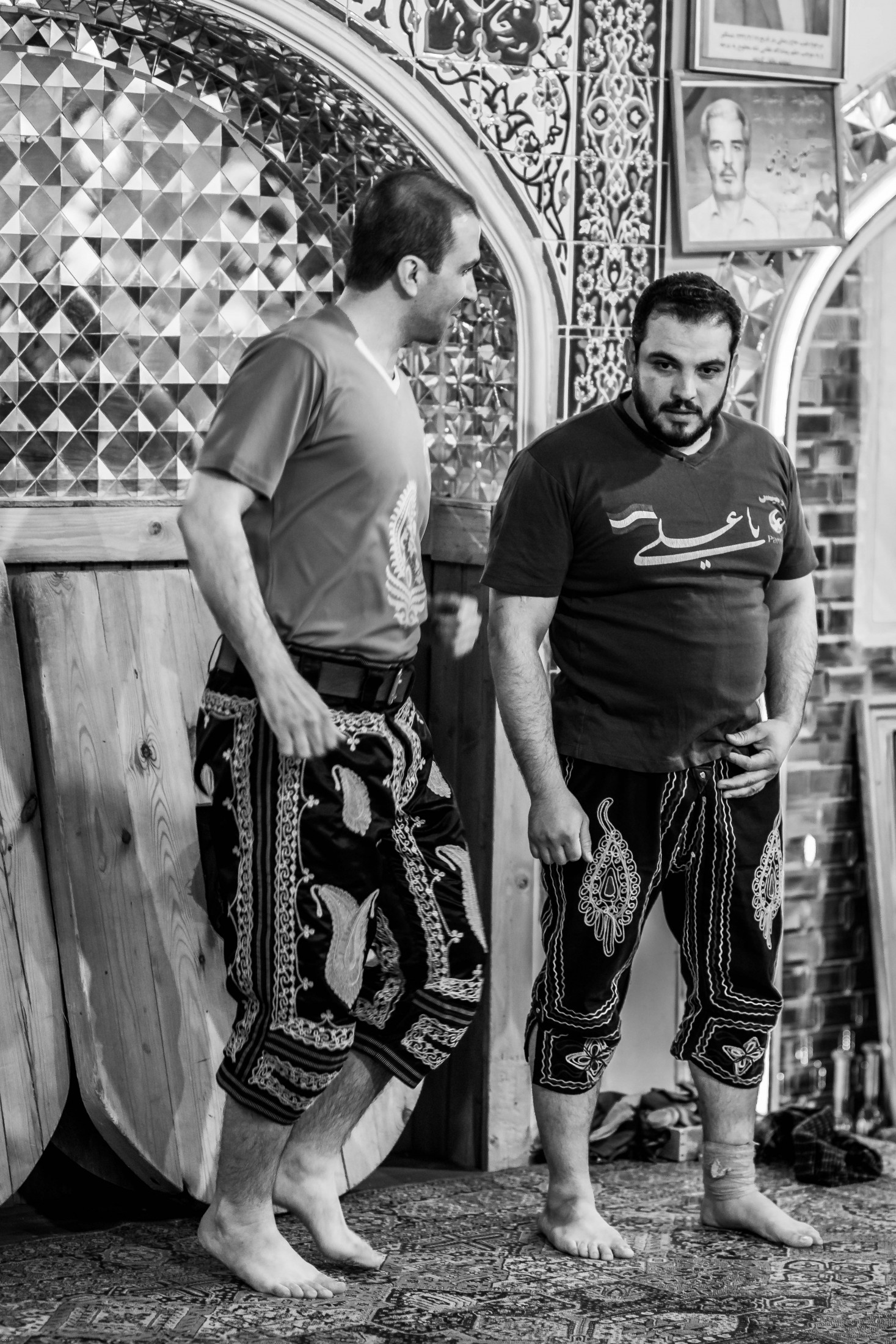 After the warm up outside, the men gather in the Zoorkhaneh ring and then you hear the sound of drums (zarb) and singing that mark the beginning of the session. The drums guide the athletes rhythm throughout the session and the spiritual singing is supposed to lift their spirits and encourage them to do well. 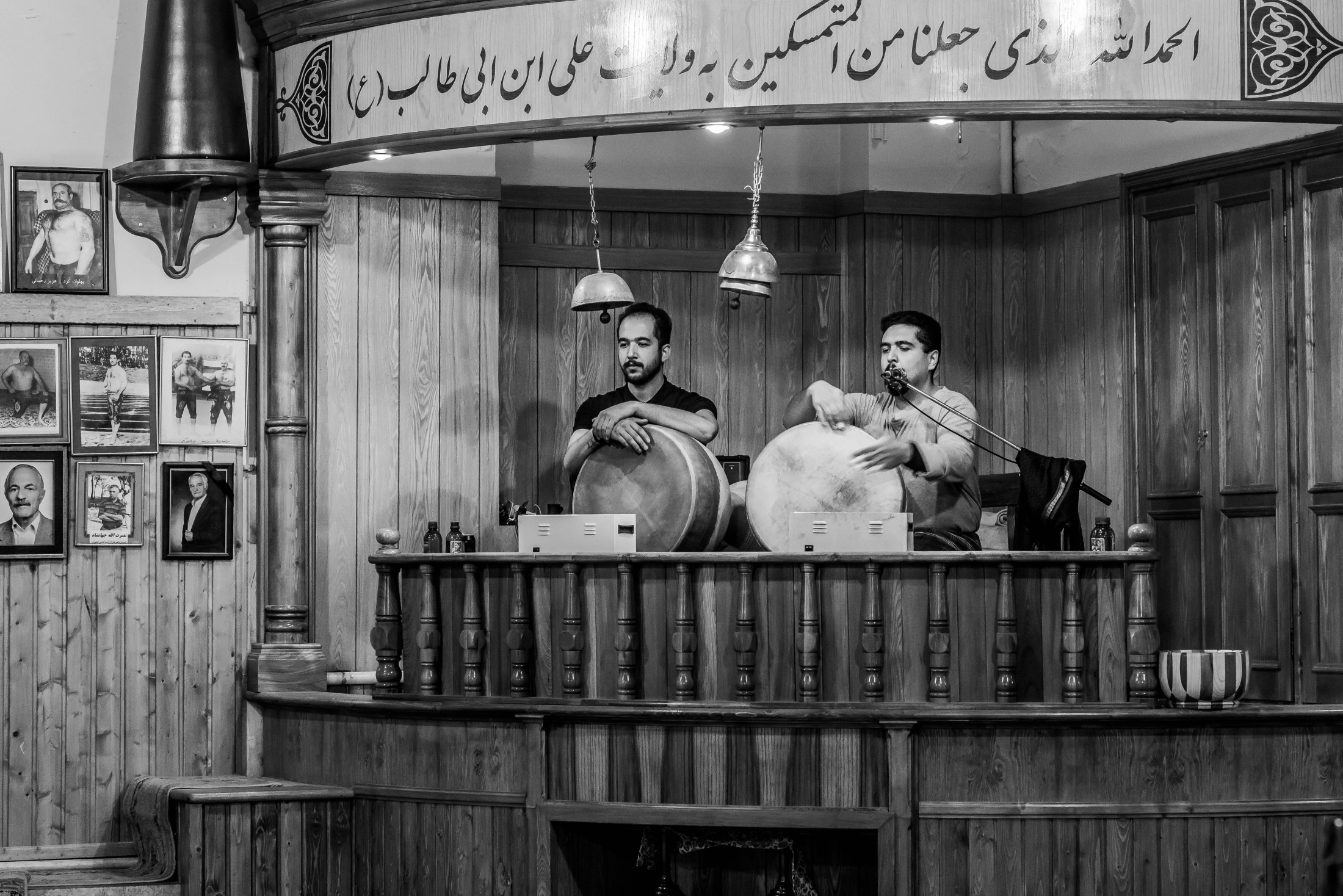 The warm up is called Narmesh and consists of floor exercises like push ups to get your body ready. 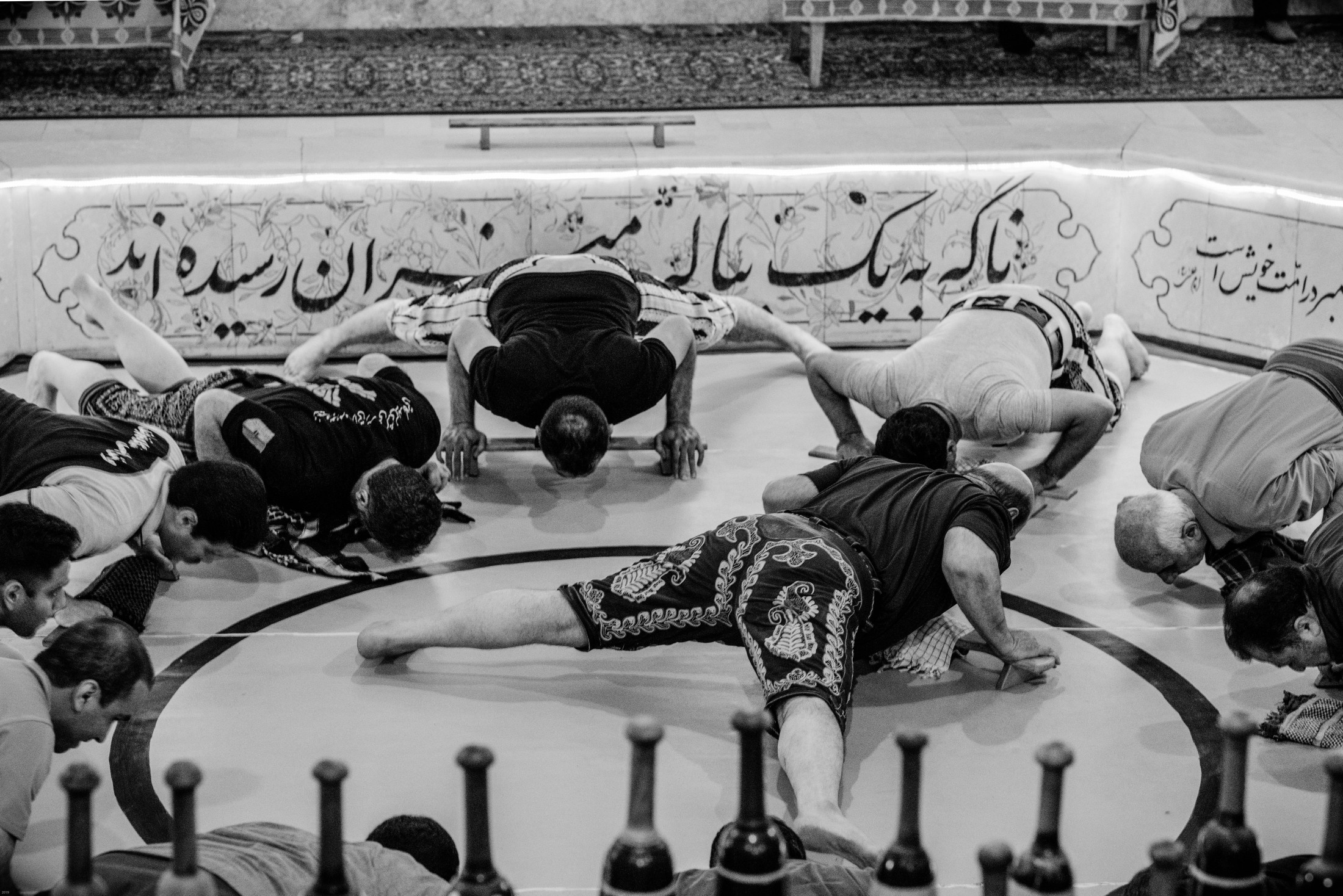 At some point each man takes a pair of Meel Bazi weights. These can be one or two kilos each and are used in sets of 100.

They are also sometimes thrown and caught in the air to show the skill of the athlete. 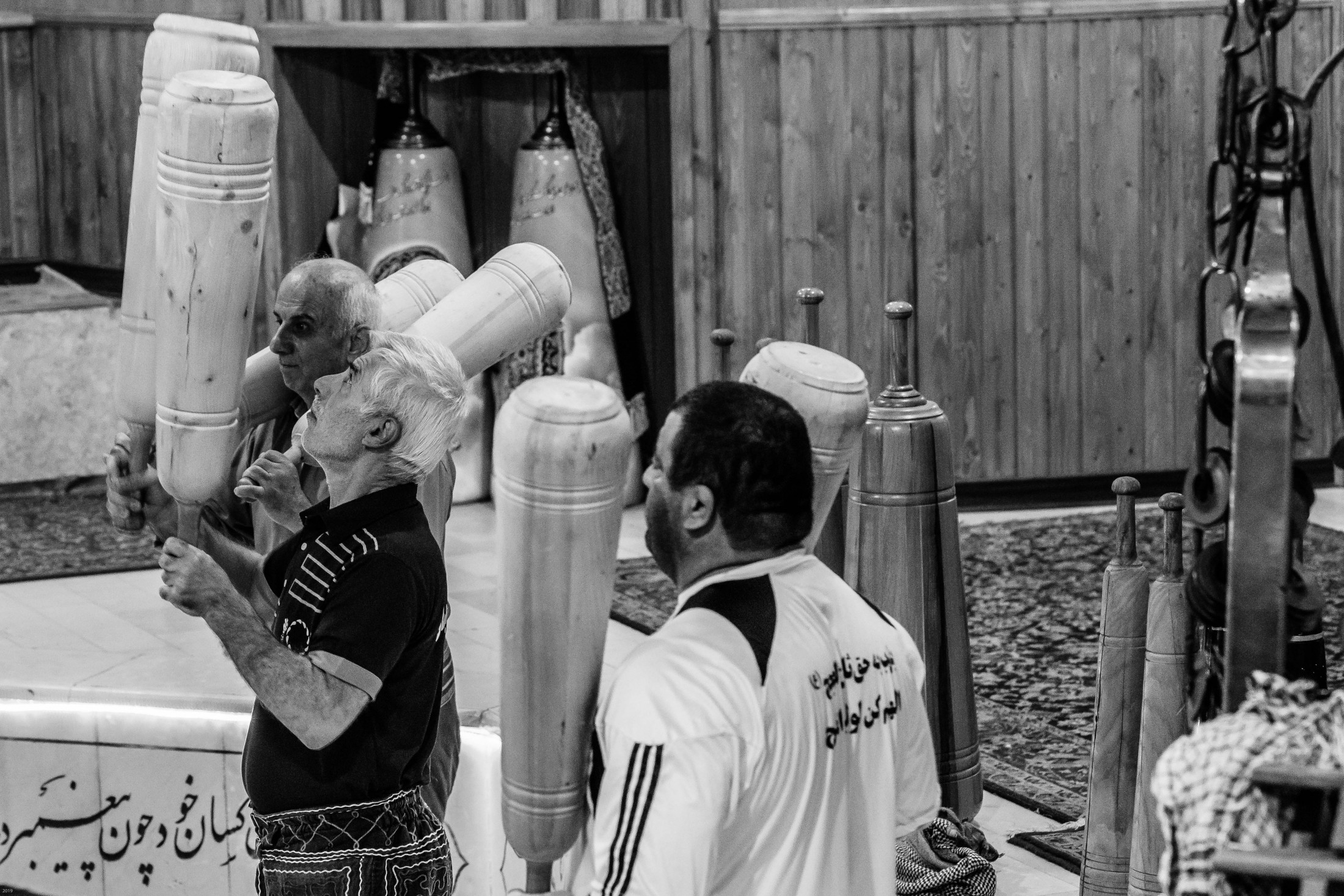 When a man wants to show his skill, he asks permission to go into the middle of the group and performs. Besides throwing the Meel, men also practice the Charkh Zadan, by swirling very fast to show their coordination and balance. And if you have been doing this for most of your life, age is really just a number. 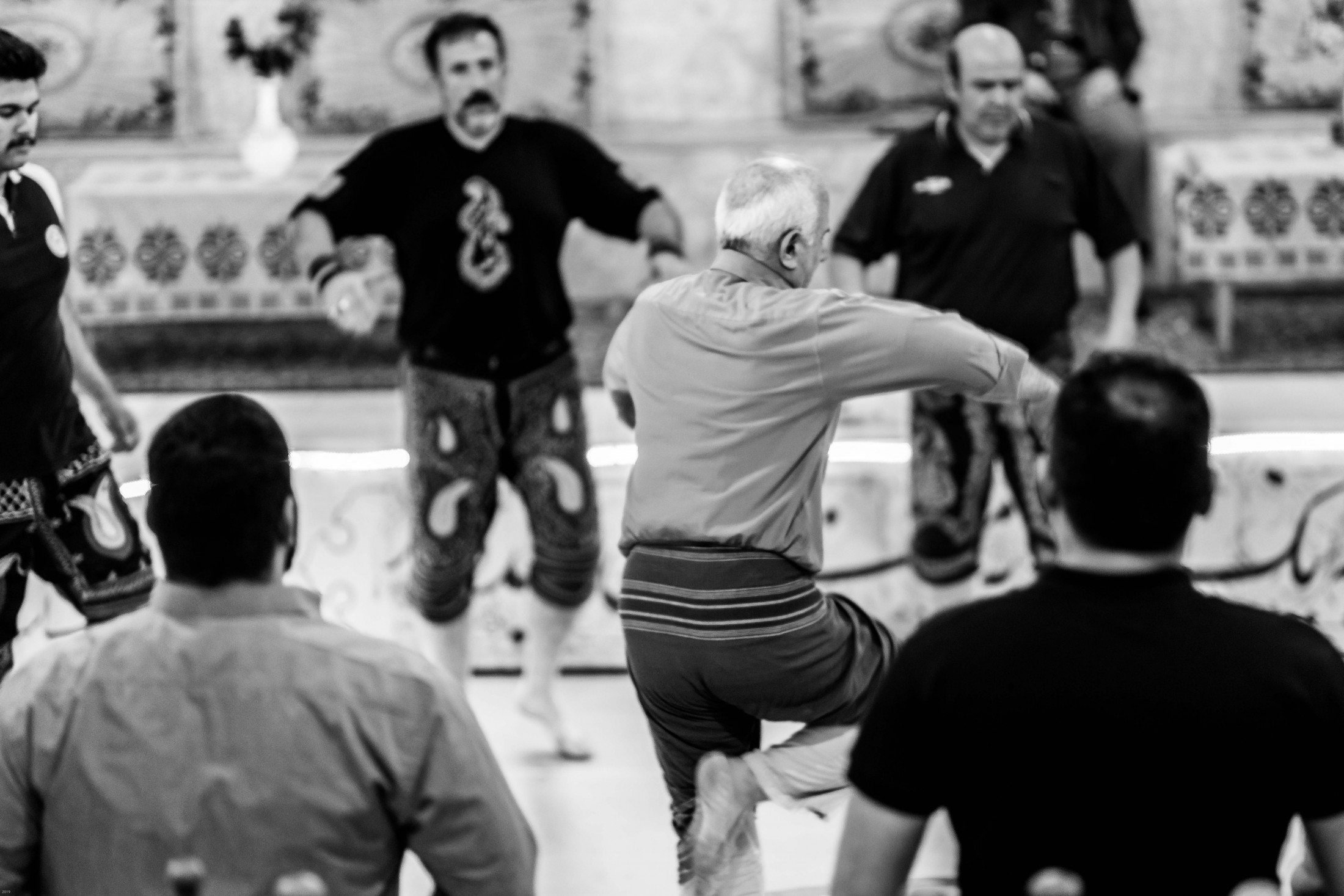 We, the audience couldn’t help feeling thrilled by witnessing a sport that has been considered the oldest practiced in the world still today. We were offered tea and cookies as a gesture of kindness and welcoming, something I have witnessed time and time again in Iran. 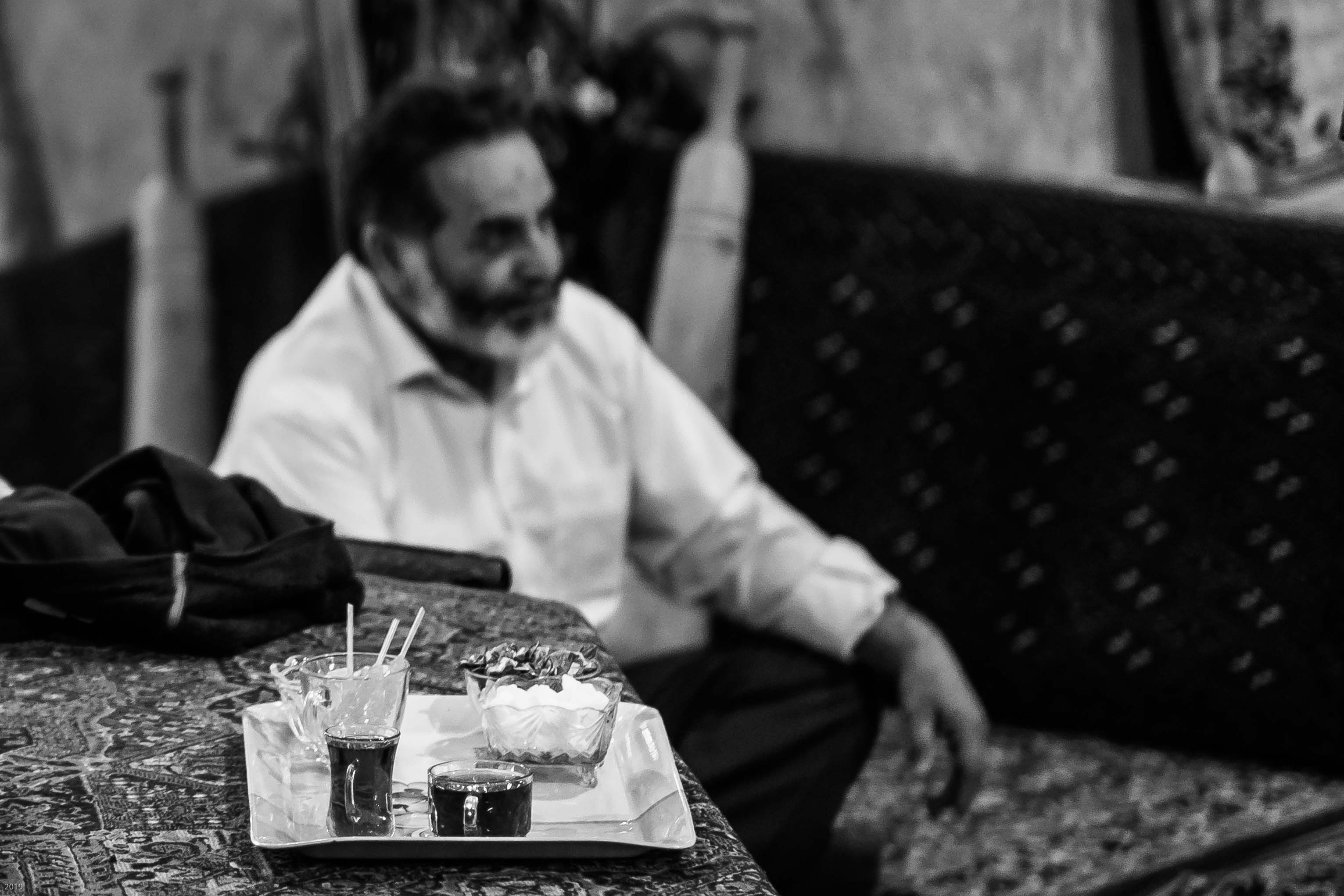 But I was also happy to witness the practice of this sport in a real Zoorkhaneh. This was not my first time in a Zoorkhaneh but the other times had been in Zoorkhanehs that are mostly used for special performances. This one was a real gym, where men come to practice regularly as a cohesive group and spend time together.

There was just one last tool I hadn’t seen in action yet, the Kabadeh that resembles a bow. I was not disappointed by the skill shown. 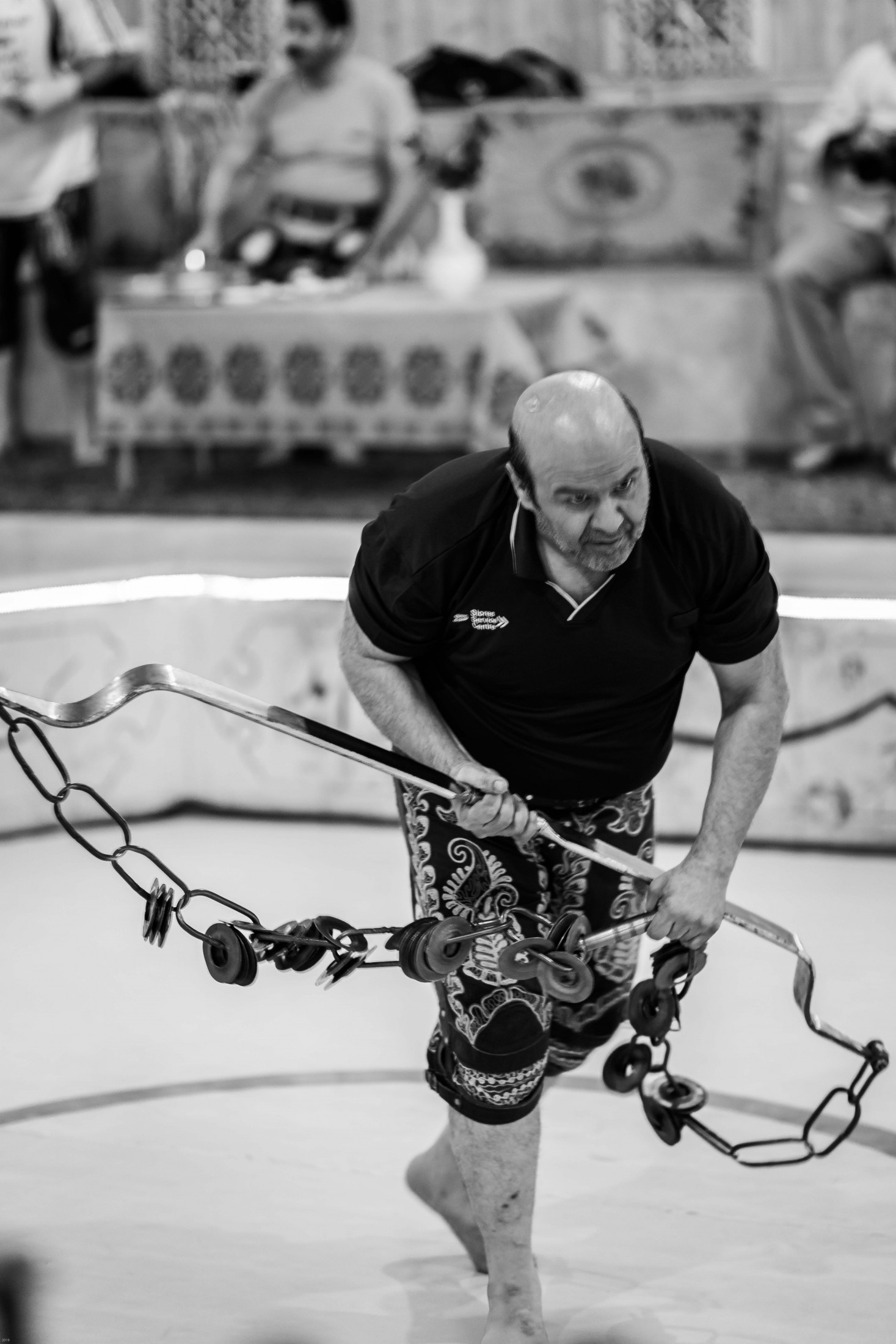 Looking at the garments that men often tie around their waist, I thought how happy I am that I got a glimpse of this ancient sport. Another thing I can tick off my list of things I must see or do before I leave next summer. 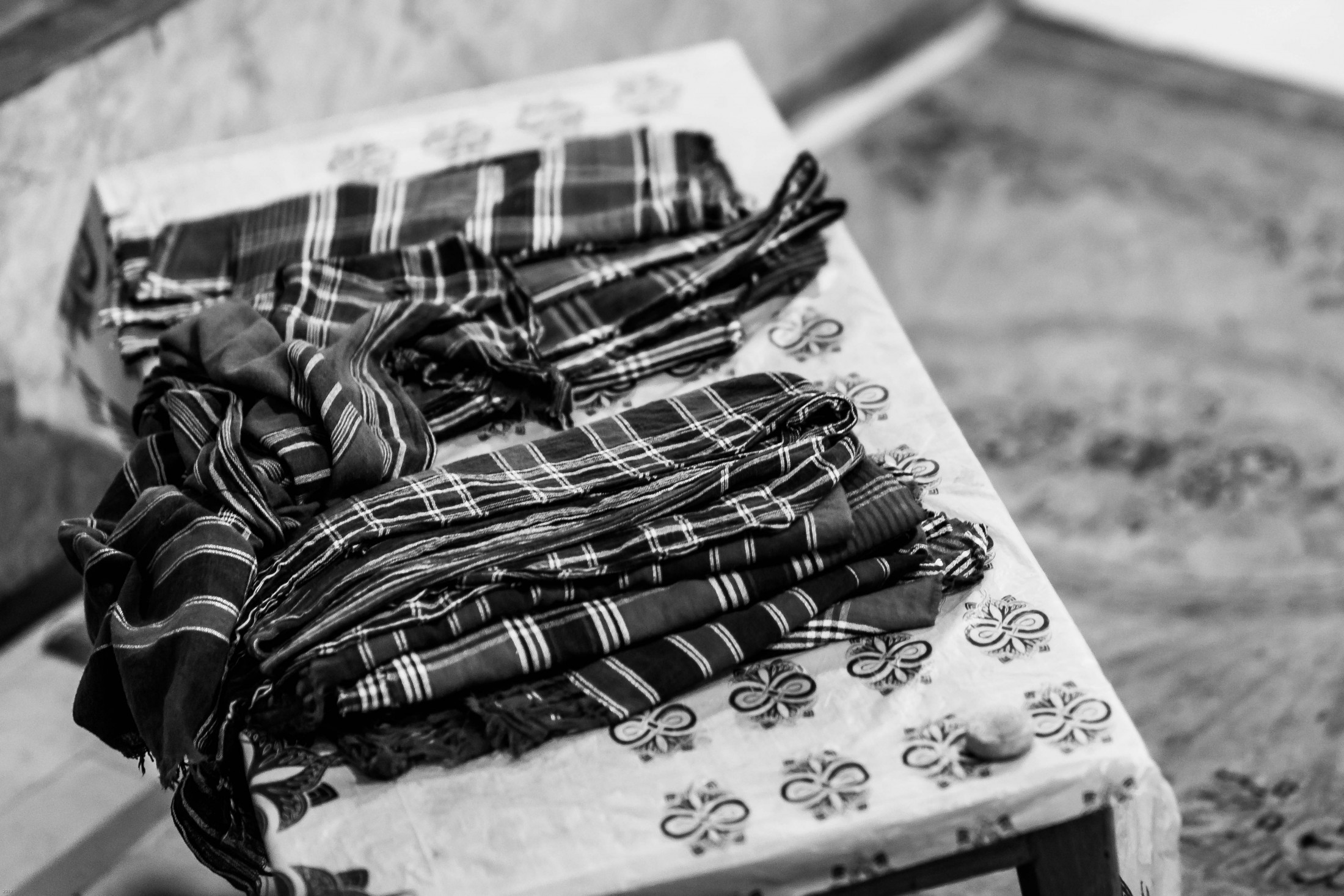 The men were sweating but happy, it had been a good session. 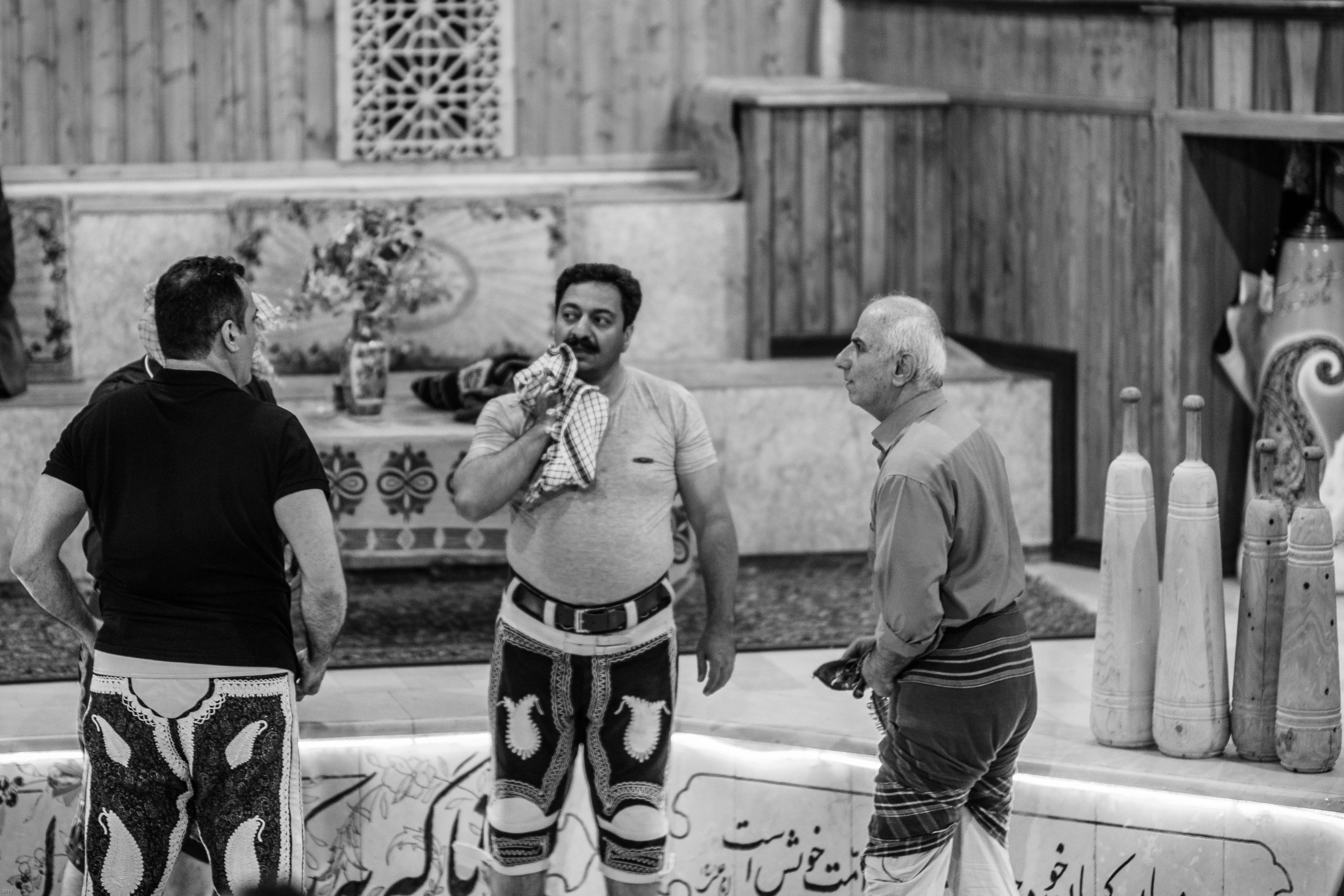 Each session usually ends with a prayer thanking Imam Ali and God for the inspiration and strength shown.

In spite of many young people having traded the Zoorkhaneh for a modern gym, there are some that are keeping this tradition alive and I hope it will still stand the test of time. 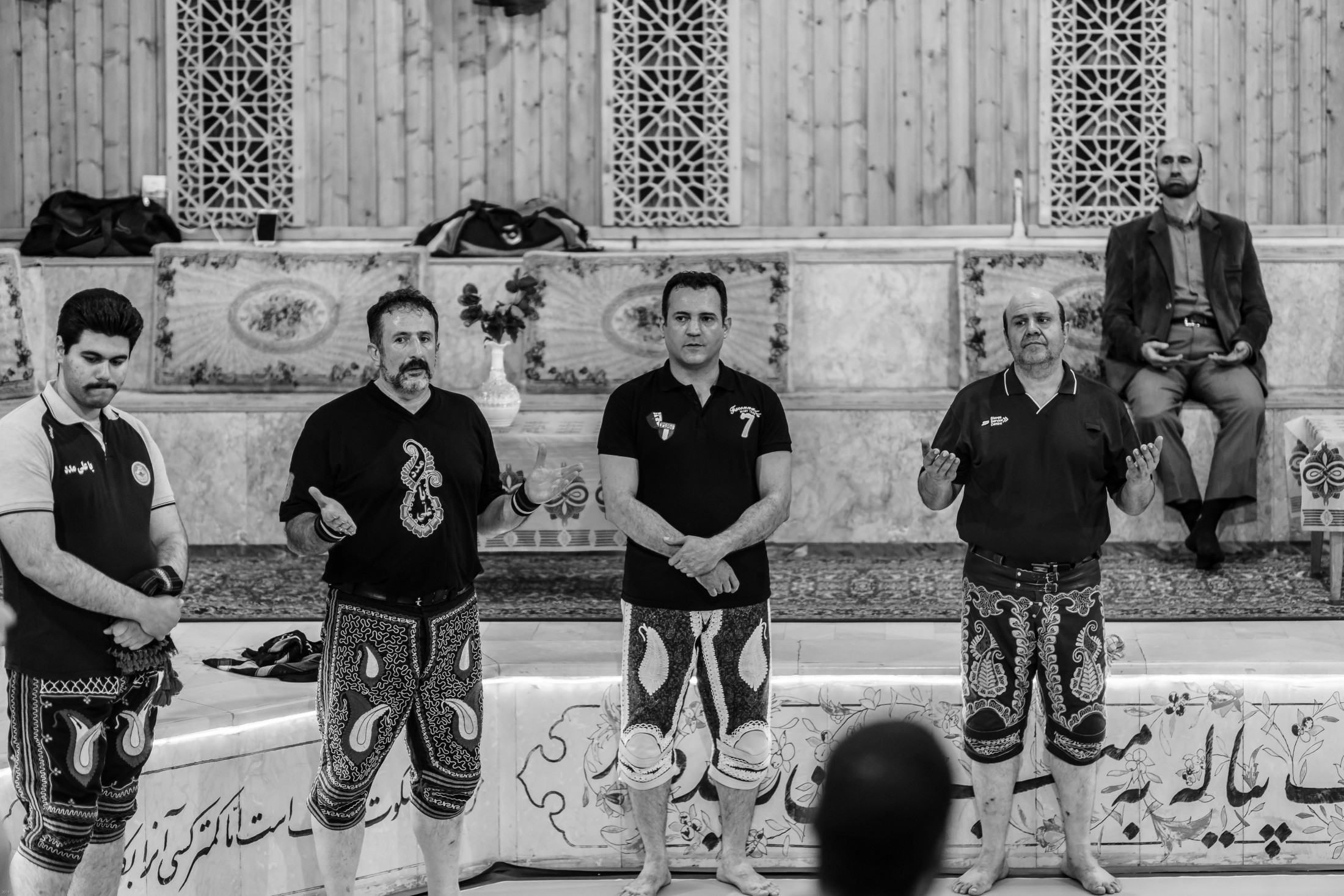 Apart from the drums and singing, I had also heard another kind of music. It had sounded like there was a live singing bird somewhere, that never stopped showing its skills at the same time as the men. Where could it be, I wondered.

Walking along the ring, I finally found it, a bit more quiet as if it already knew we had got to the end. 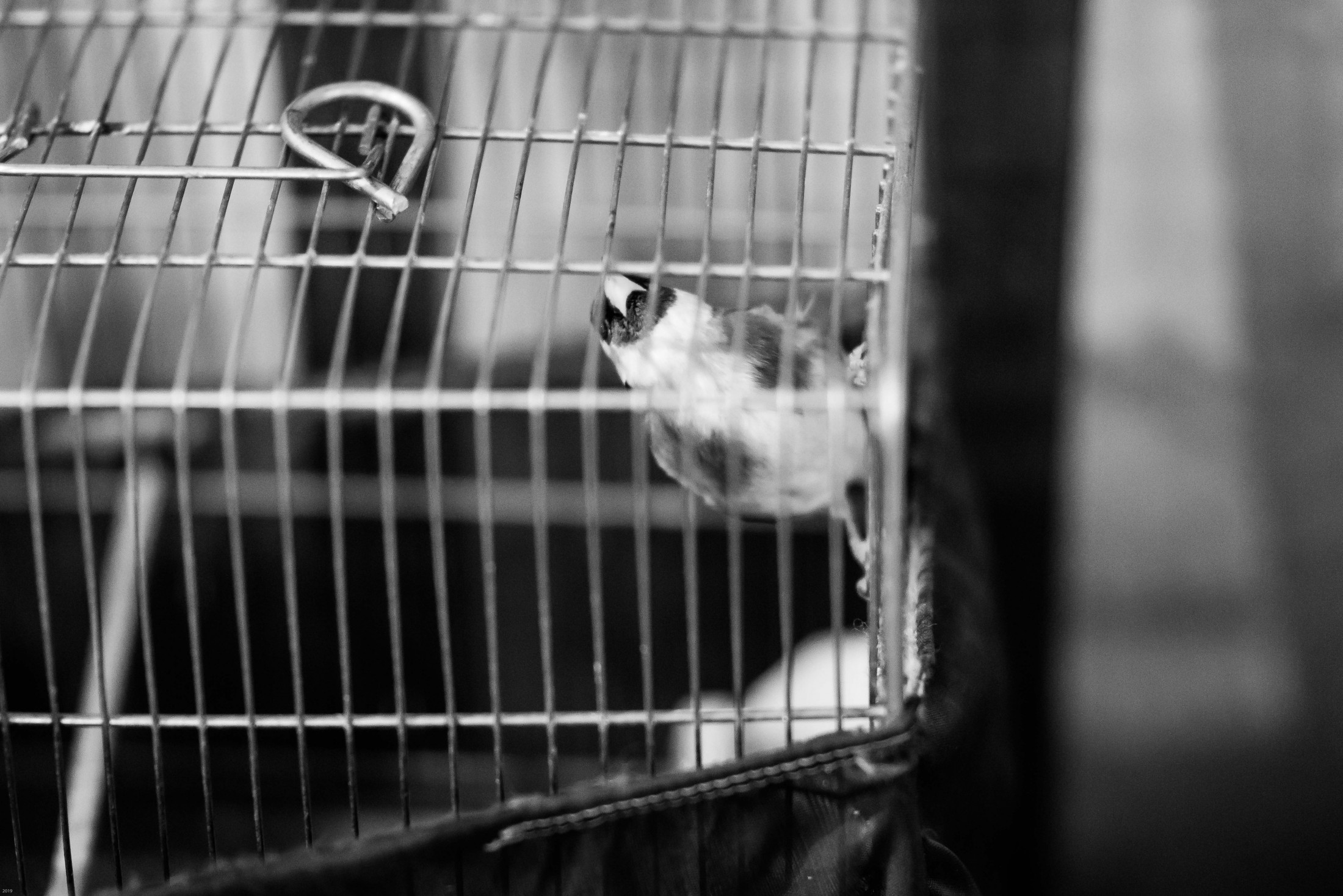 No one is actually dead until the ripples they cau

Happy New Year from Vienna! May the New Year bring

He’s coming! At midnight! In which form and what

Hello Tehran! Vienna calling! To all my Iranian fr

Until next time ...#blackandwhitephotography #bnwp

Without them Venice would not be the same #blackan

The other Venice ... #blackandwhitephotography #bn

On the road to Venice #ontheroad #blackandwhitepho