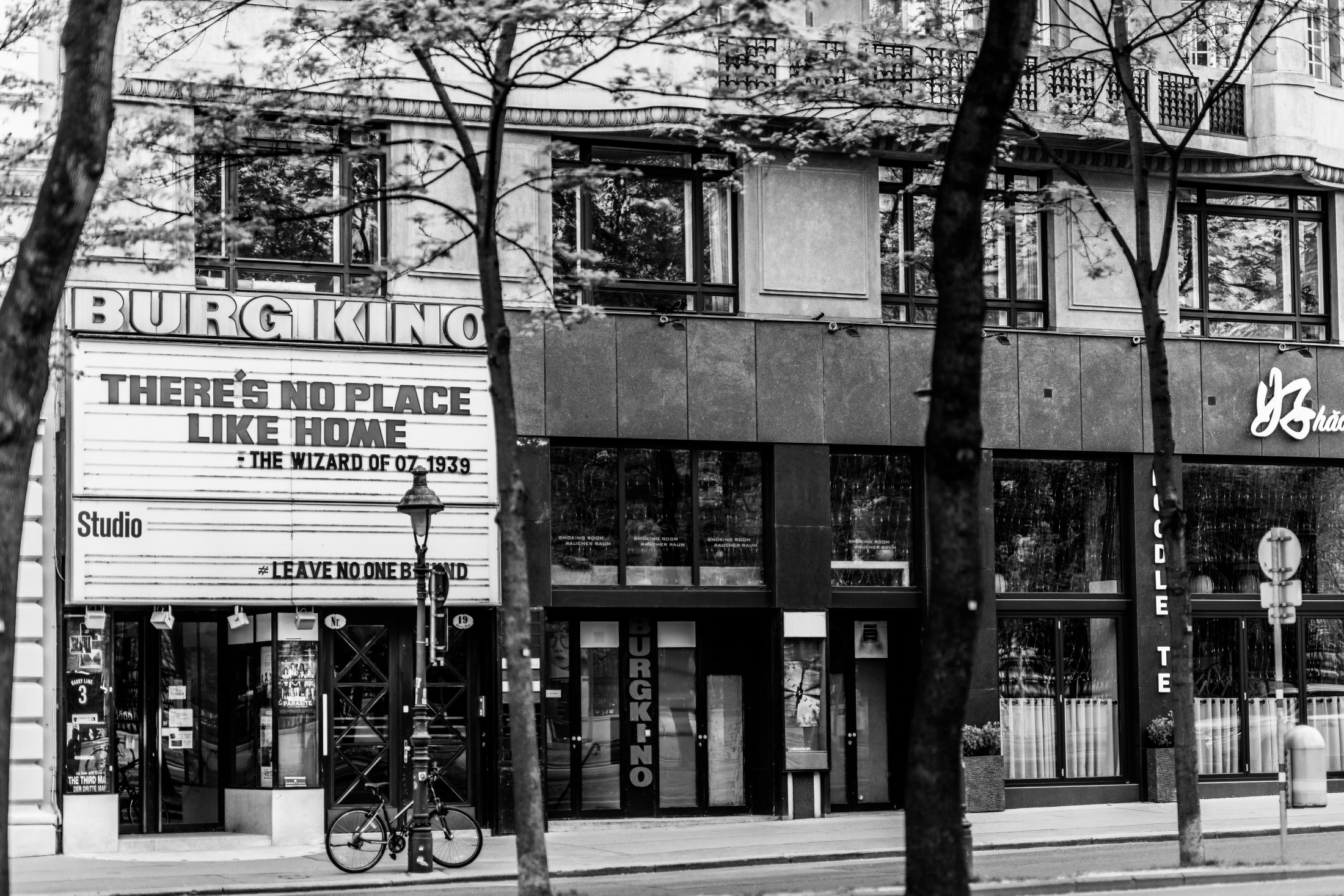 You know you have reached a “new normal” when you are able to have the first ice cream of the season, but in a cup only option and wrapped in foil until you are safely outside the shop. 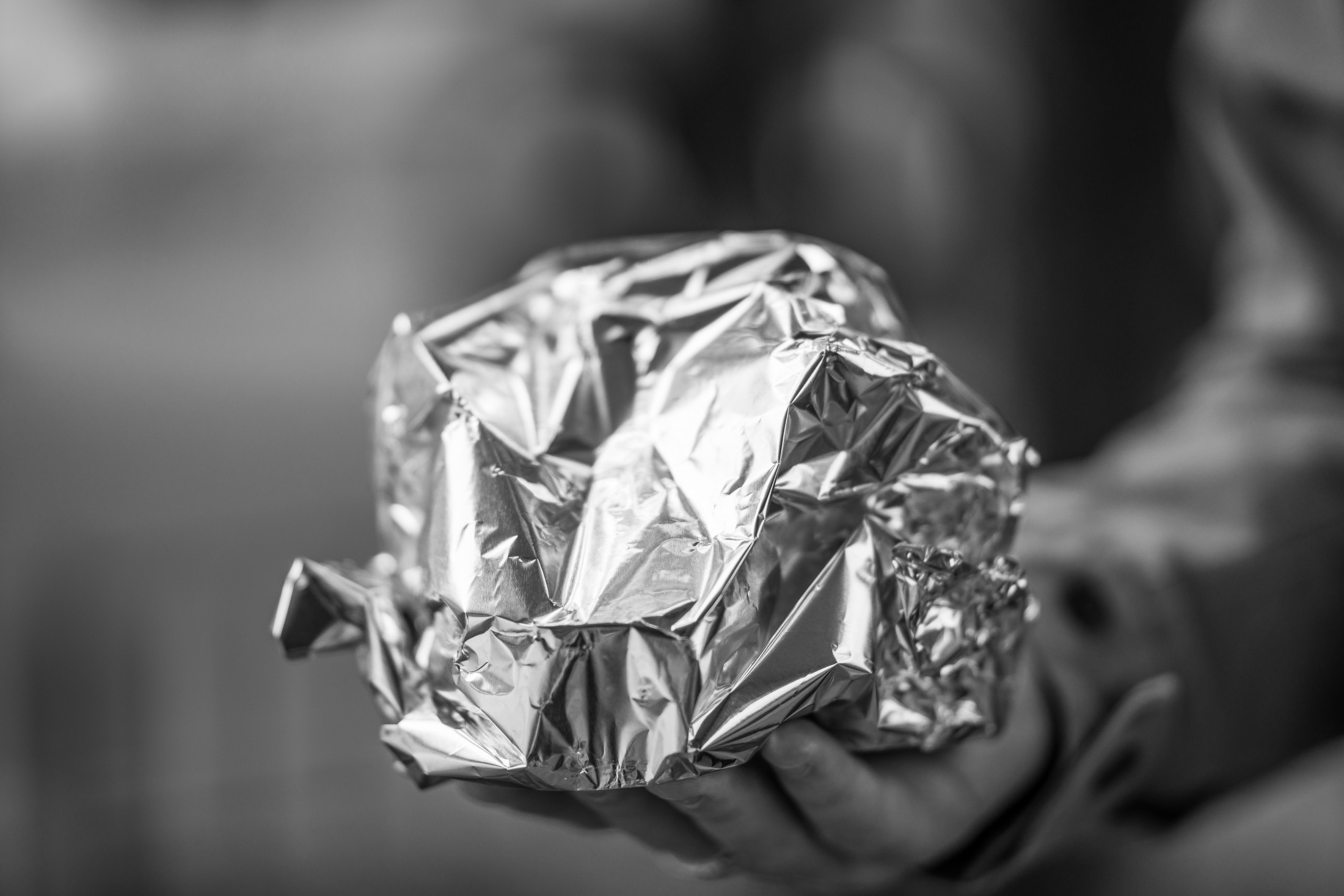 The ice cream vendor told my husband, who had been at a safe distance in the queue wearing his mask, to unwrap it somewhere else.

It really felt like we were buying something illegal that needed to be hidden away from prying eyes. We looked around for the best place to unwrap it at a safe distance from any other people. We turned a corner and entered a side street that looked pretty empty. The moment we started unwrapping it, we saw a woman slowly walking towards us and we hesitated. Looking at each other, we just burst out laughing!

Is this now going to be our “new normal”? At least the ice cream still looked and tasted the same! 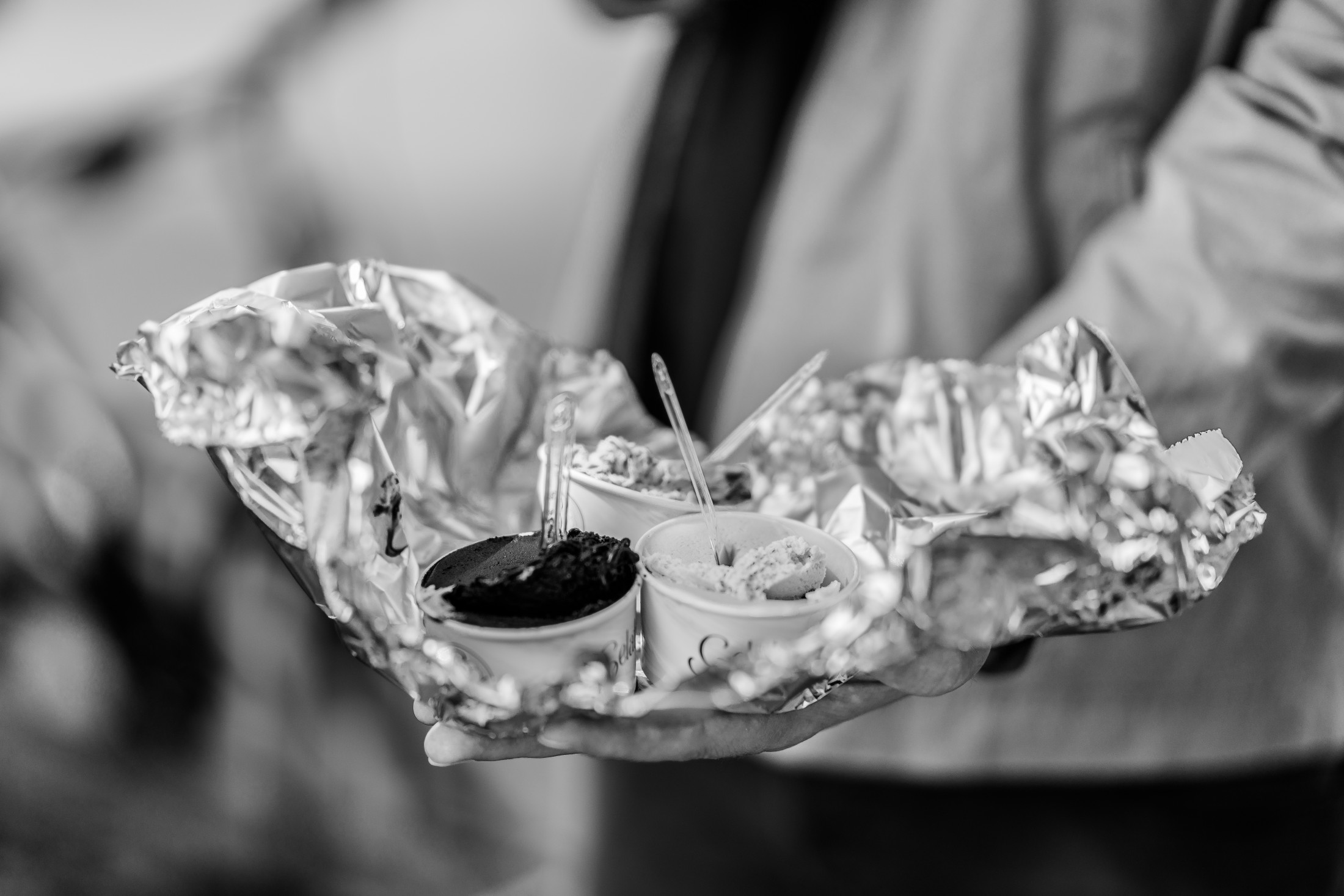 We are social animals, it is in our nature and this week I was reminded of that in our local park. It is one of those pictures which got away but will stay in my memory for a long time.

I was walking with my daughter when I saw two families ahead on opposite sides of the path. Both had toddlers. They looked like they hadn’t been walking for long as their steps were still full of hesitation.

Suddenly one of the toddlers looks to the other side and spots the other one. He was so excited to see another mini him that before any of the families could react, he opened up his arms and ran towards the other one with cries of joy. The other turned, smiled and ran to meet him in the middle. They both embraced and almost fell down, laughing in the process.

This is who we are, we can’t help it. Both families smiled at each other before they took them away. Unfortunately being spontaneously sociable is not safe or allowed at the moment.

Since I arrived in Vienna, I had not been to the city center due to all the limitations imposed. This week, since things have improved with the opening of a few more shops, I decided to check it out.

We walked all the way.  It is a great exercise and a way of still avoiding public transports. I don’t remember ever seeing the streets this empty. The place that most impressed me was Stephansplatz where St. Stephen’s cathedral is.

Usually Stephansplatz is always full of people and groups of tourists. Since the cathedral closed its doors and the borders are shut, just locals are going out for a stroll or getting some fresh air. 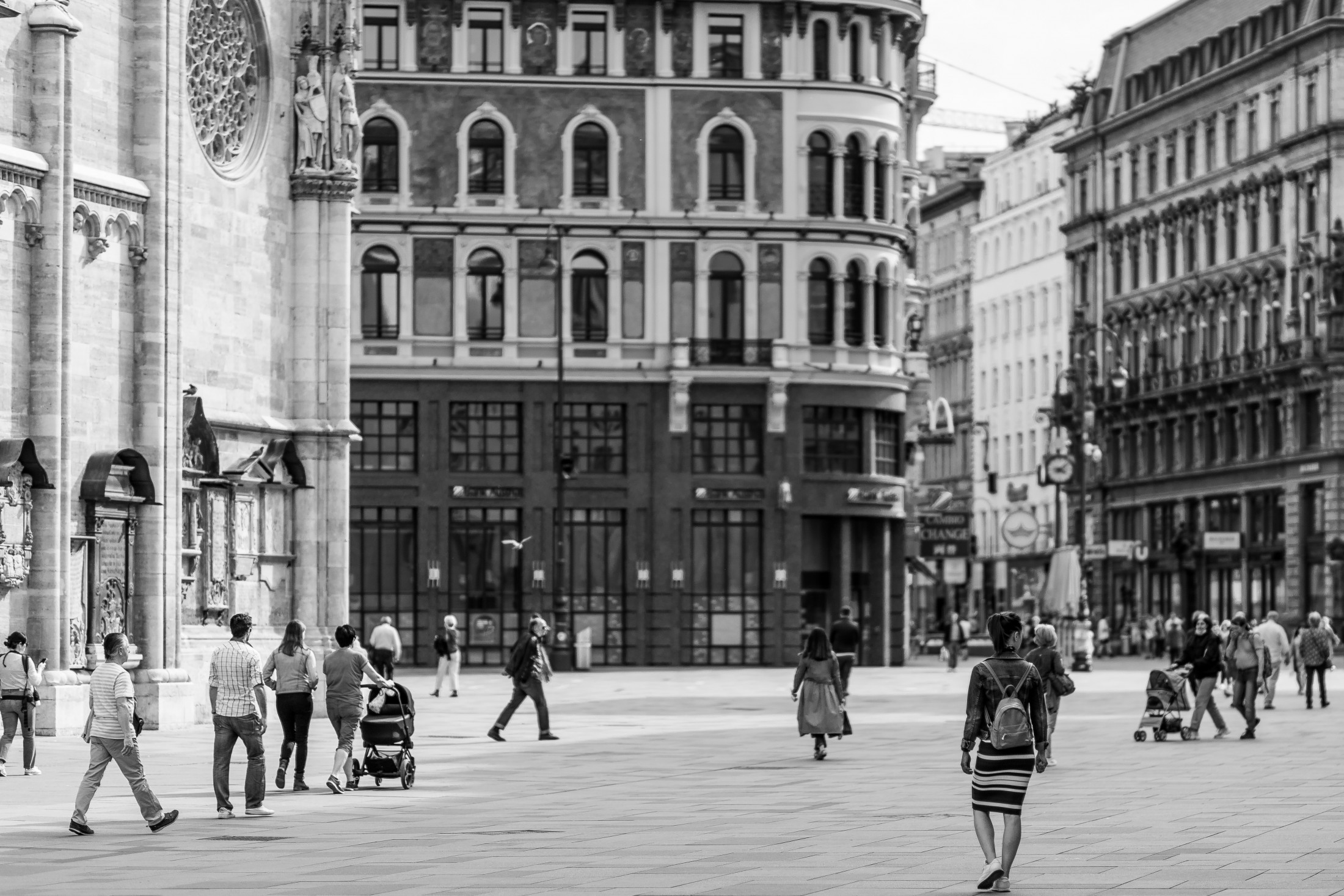 Children have more space to move around and old people can now sit in a bench quietly. 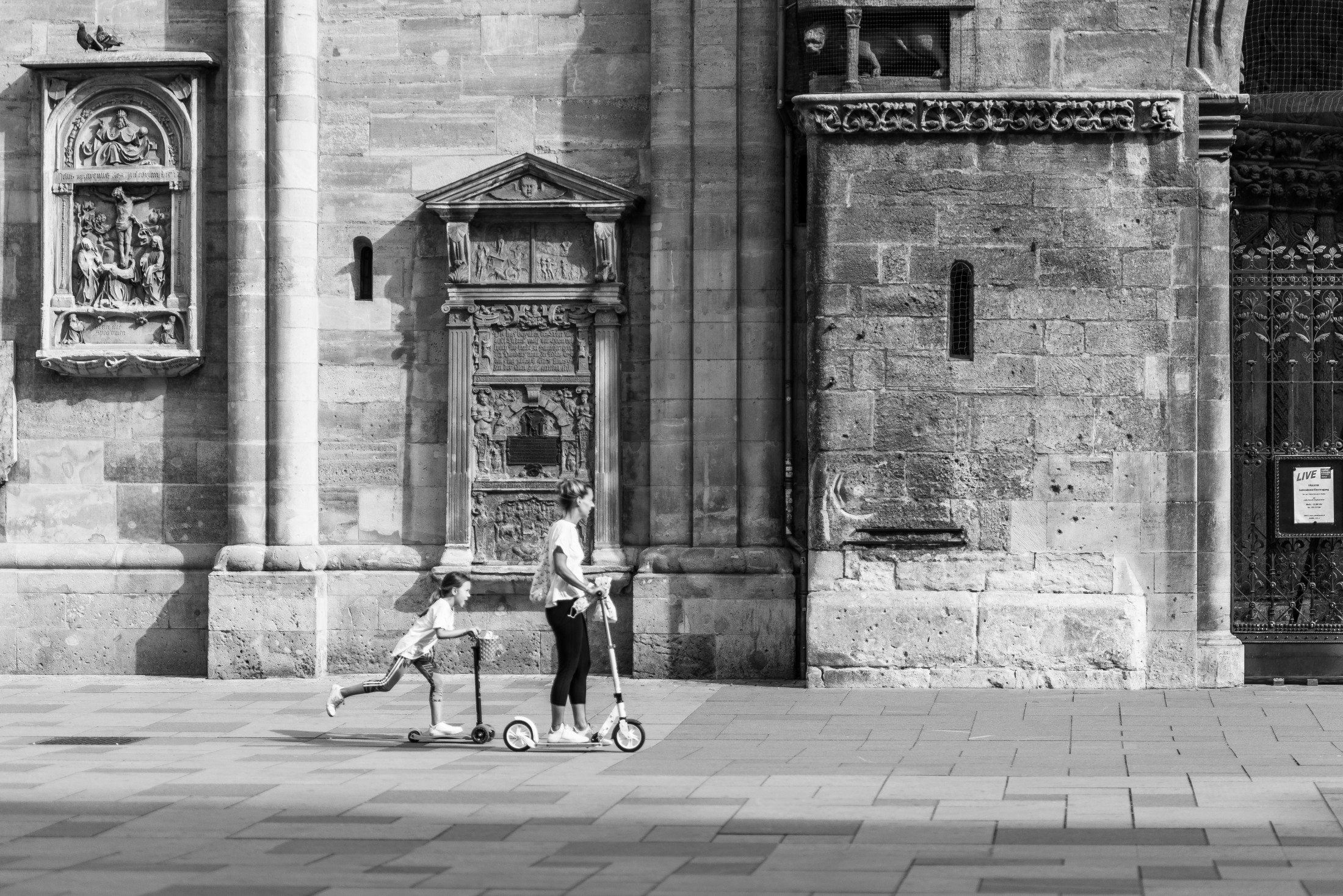 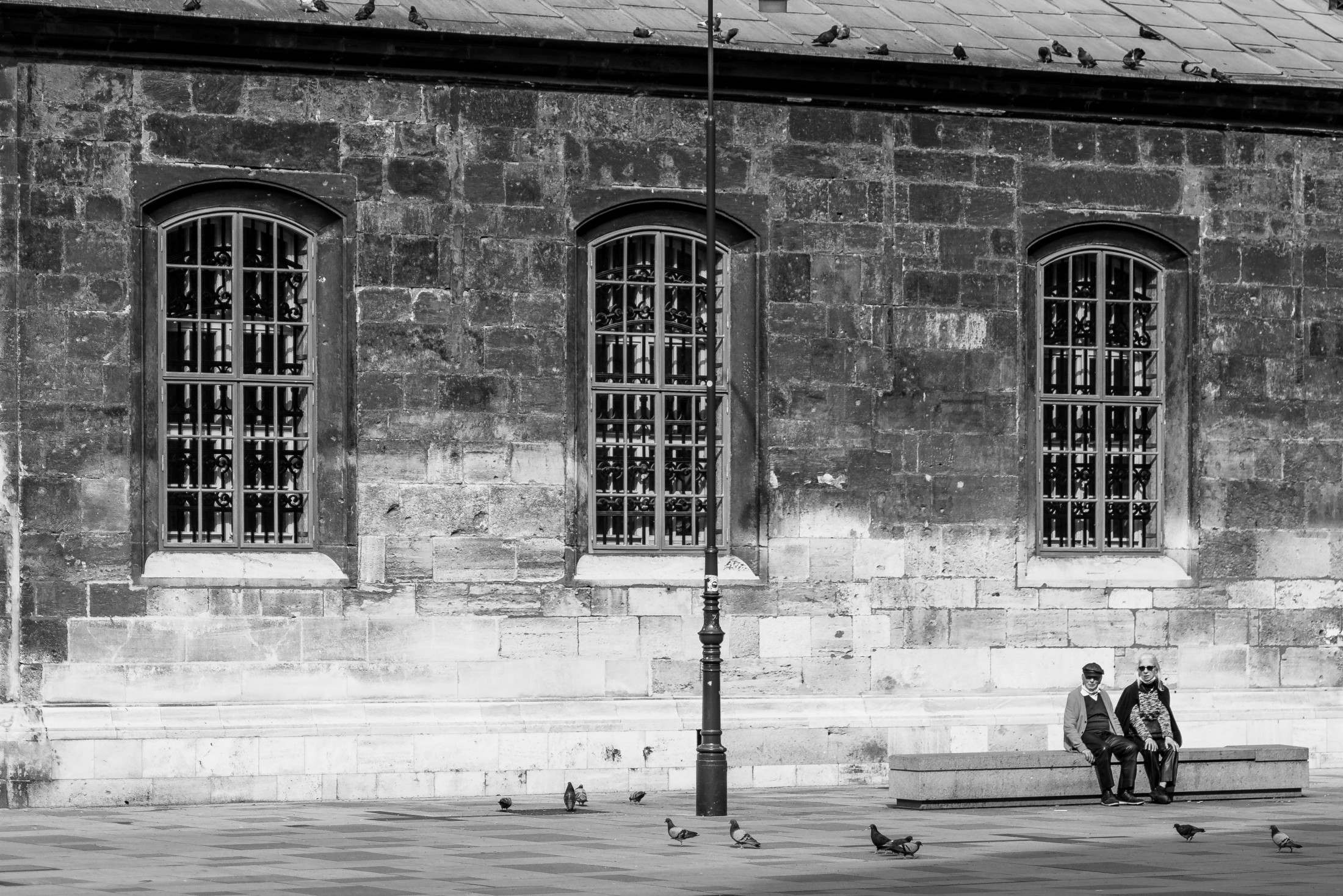 Suddenly looking at the cathedral I thought I was seeing things. That was definitely not there before. It looked like a giant hot water bottle with feet. I thought maybe I’d been too long on lockdown.

Behind it, I see a man that seems to be hiding. Well it could be an original protection against the virus, with feet! I looked at the giant feet again and noticed someone had put votive candles on the front, and again think what is going on? 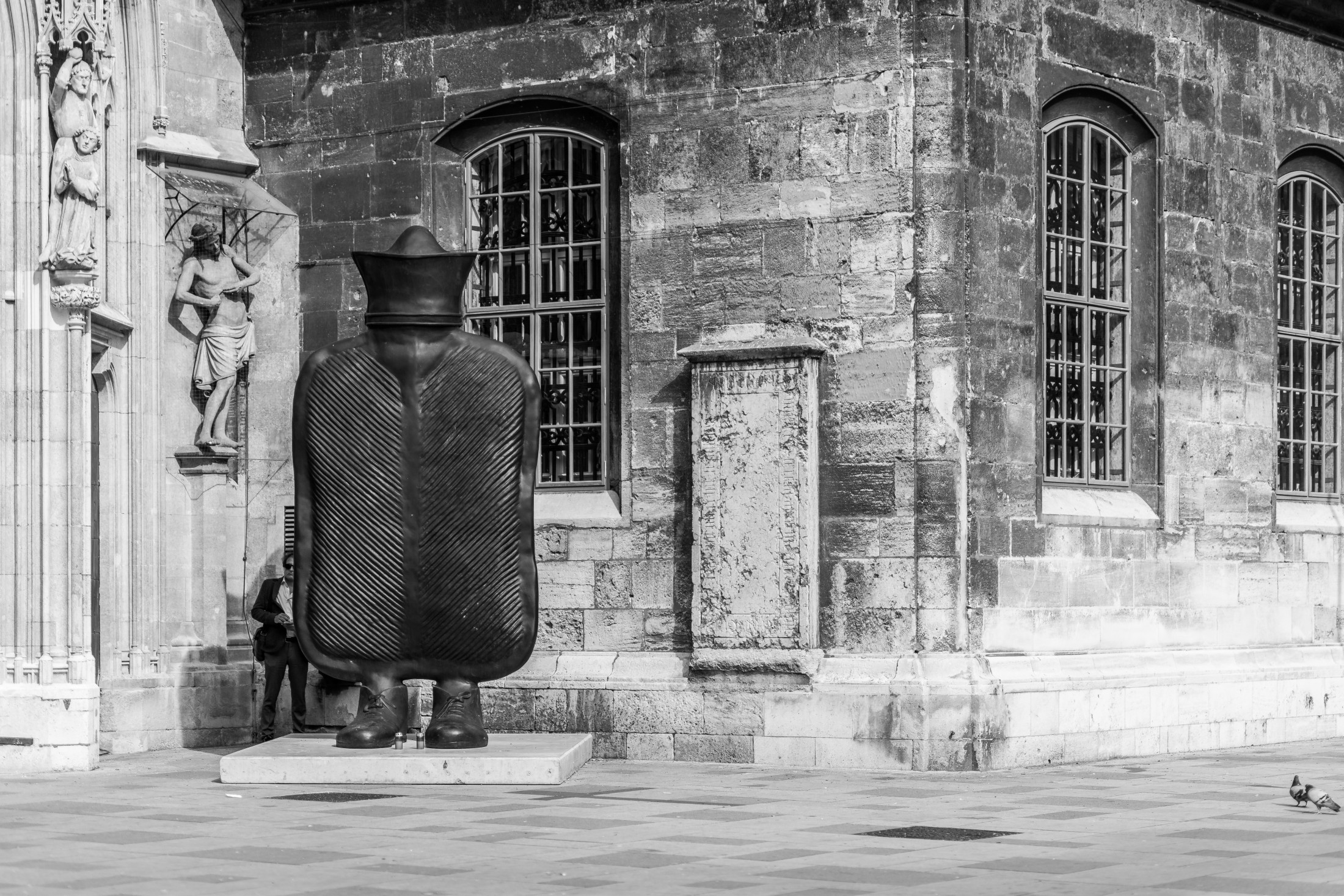 I try to find out more and discover this is part of a group of sculptures by Erwin Wurm, an artist known for pushing the boundaries. Apparently inside, there is also among others, a giant sculpture of a purple blouse, a boxing glove and a headless torso.

The giant hot water bottle is called Big Mother and symbolises warming charity in the period of Lent just before Easter. I don’t really know how I feel about it. There has been some controversy about the cathedral displaying contemporary works like these.

Turning to the famous street Graben, you can’t miss the column that marks the Great Plague of Vienna in 1679. At the time 76.000 perished in the city from what they think was a kind of bubonic plague.

This column is now being used to mark a new epidemic that a few centuries later Vienna is again having to deal with. There were votive candles and children’s drawings marking the hope that this too will pass. 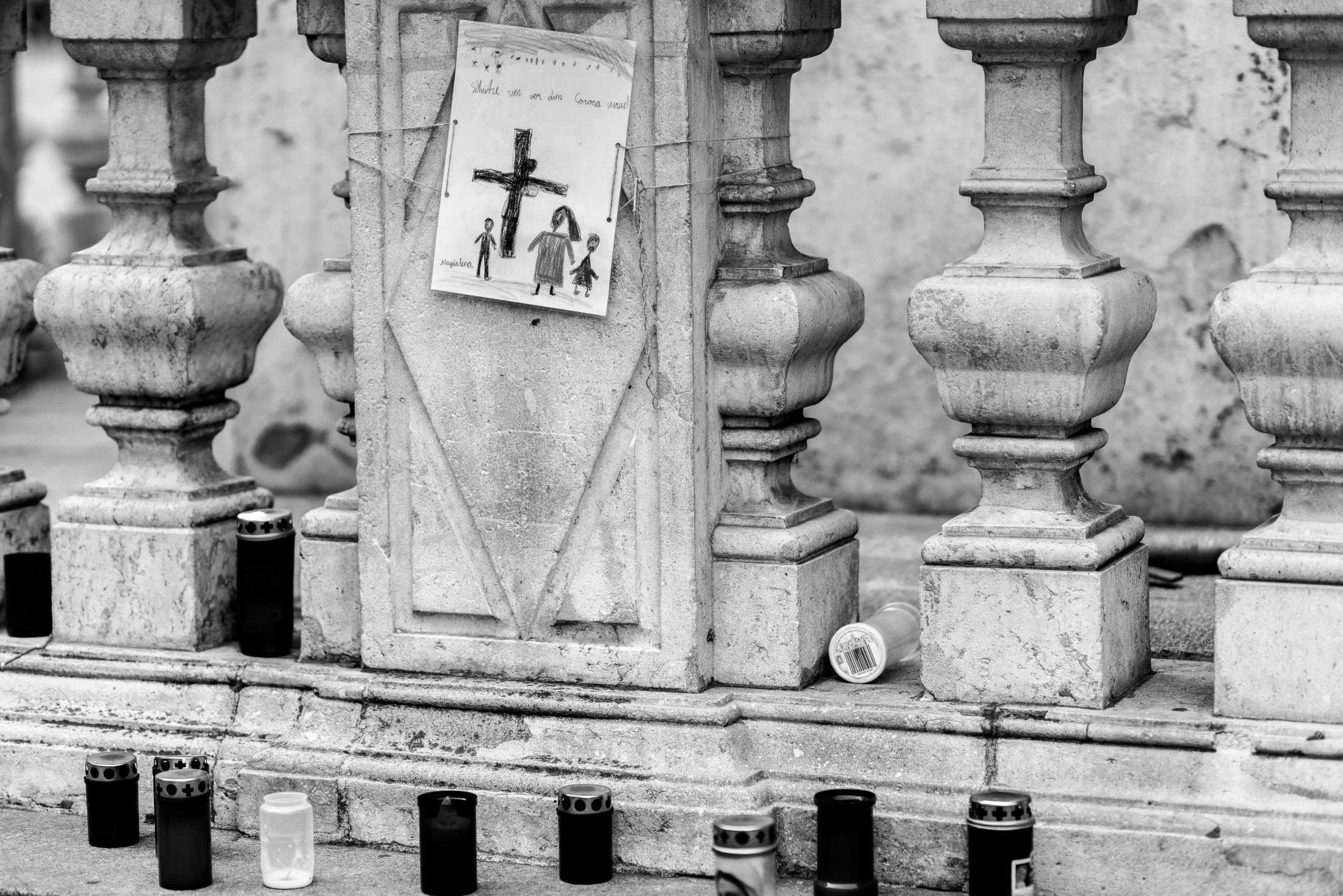 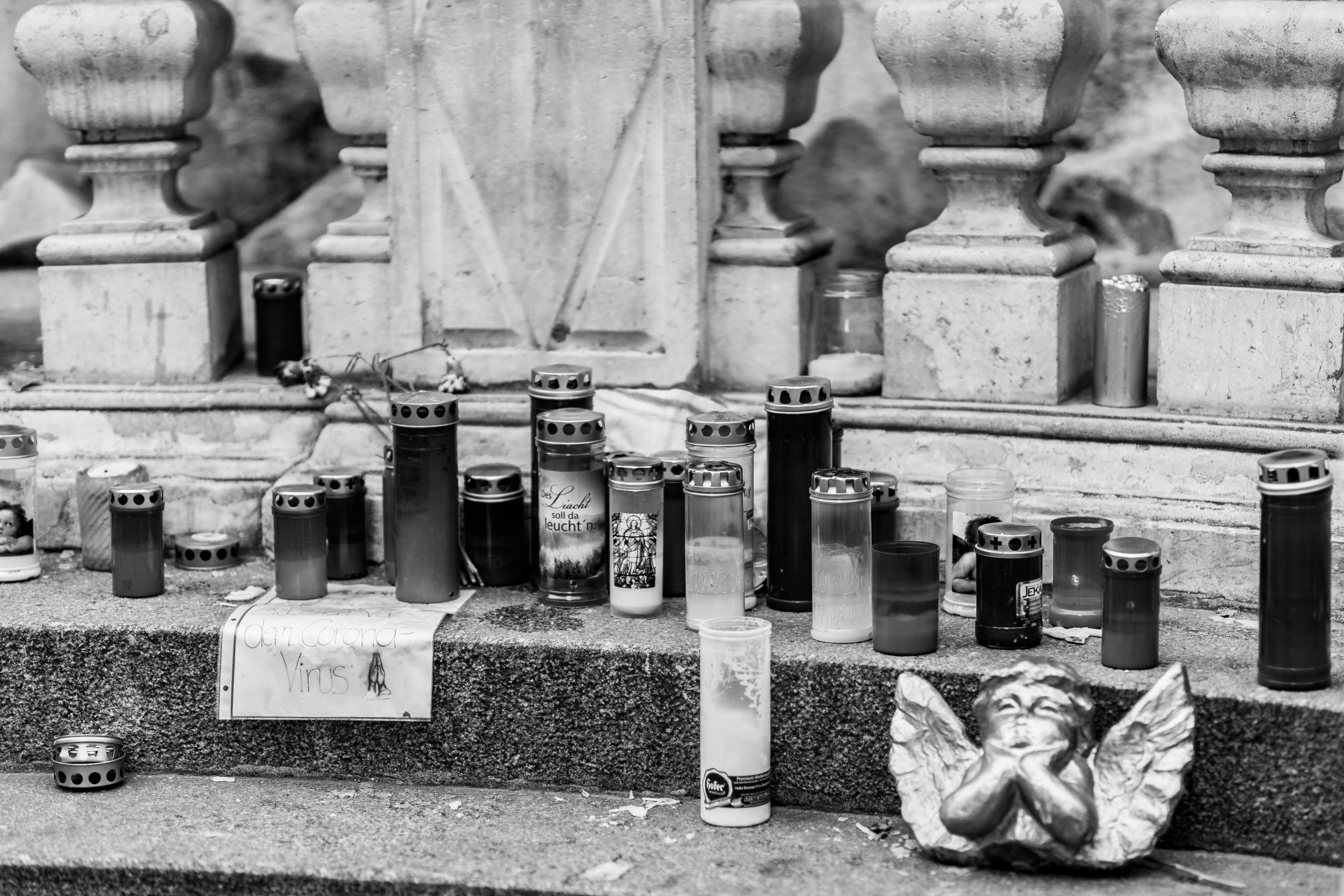 There were only a few shops that had reopened practising the “new normal”, hands disinfected at the entrance, masks inside. Some other display windows, seemed to be hanging in there literally, waiting for the return of the customers. 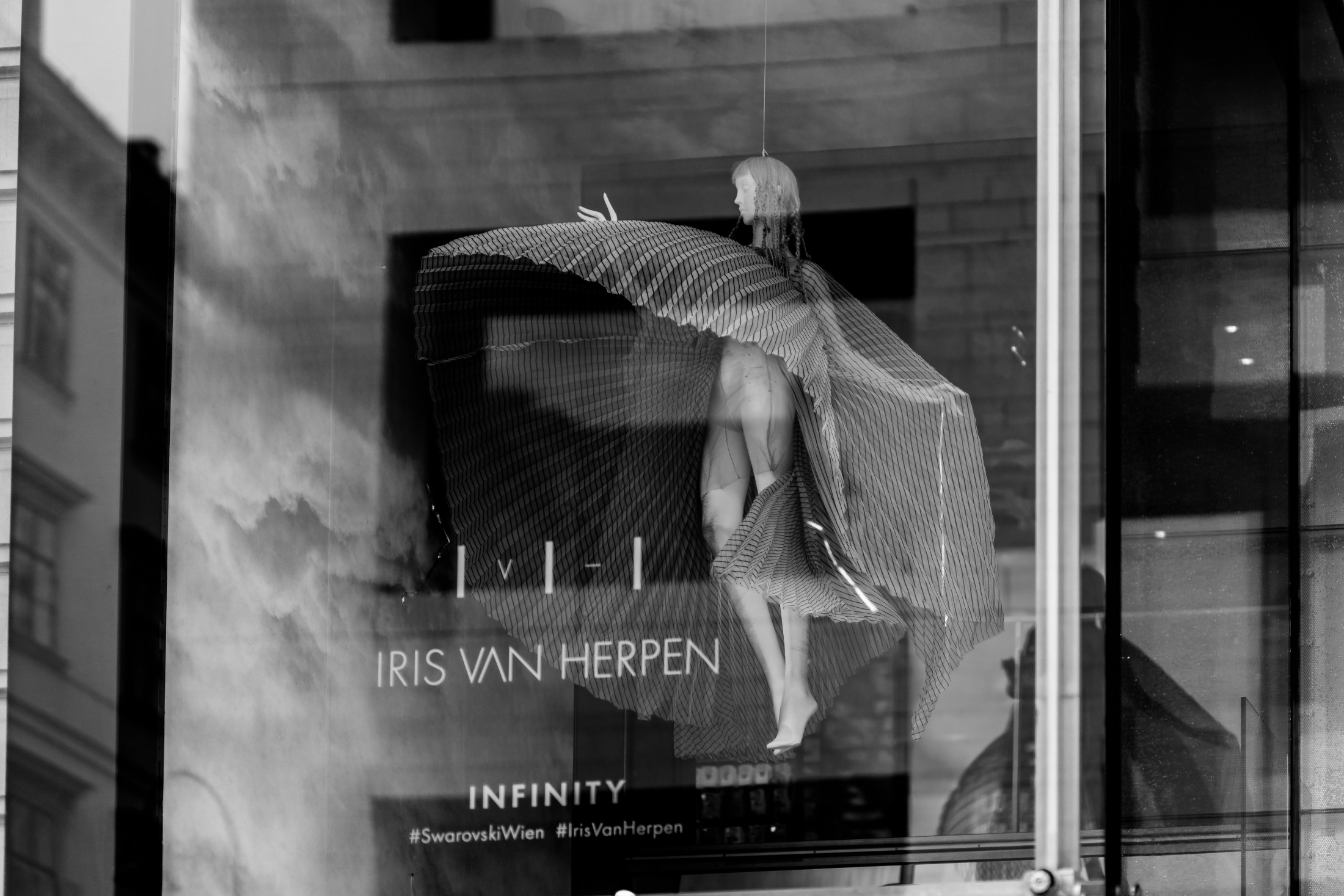 On our way home we passed a movie theatre which had the perfect quote for this difficult period we are going through, encouraging people to stay home.

Which brings me to some of the highlights of yet another week at home.

Pop by Joel Meyerowitz – a very moving and poignant documentary film produced and directed by the famous street photographer. He embarks on a road trip from Florida to the Bronx with his father and his son. His father is suffering from Alzheimer and Joel hopes this adventure, visiting places that are part of their family history, will be able to stimulate his father’s memory.

Emma – I really enjoyed the new 2020 version of the Jane Austen classic that I love. Anya Taylor Joy and Johnny Flynn are really good. It is funny, irritating and a feel good movie, perfect to watch in lockdown. I watched it on Amazon Prime.

Transplant series – A new series that has had good reviews. It is the story of a Syrian doctor that flees Syria with his sister and tries to make a new life, working in a hospital in Canada.

One World: Together at home special concert to celebrate Covid_19 workers – I stayed up late watching this live concert from the homes of singers I admire and others I did not know but was happy to discover. 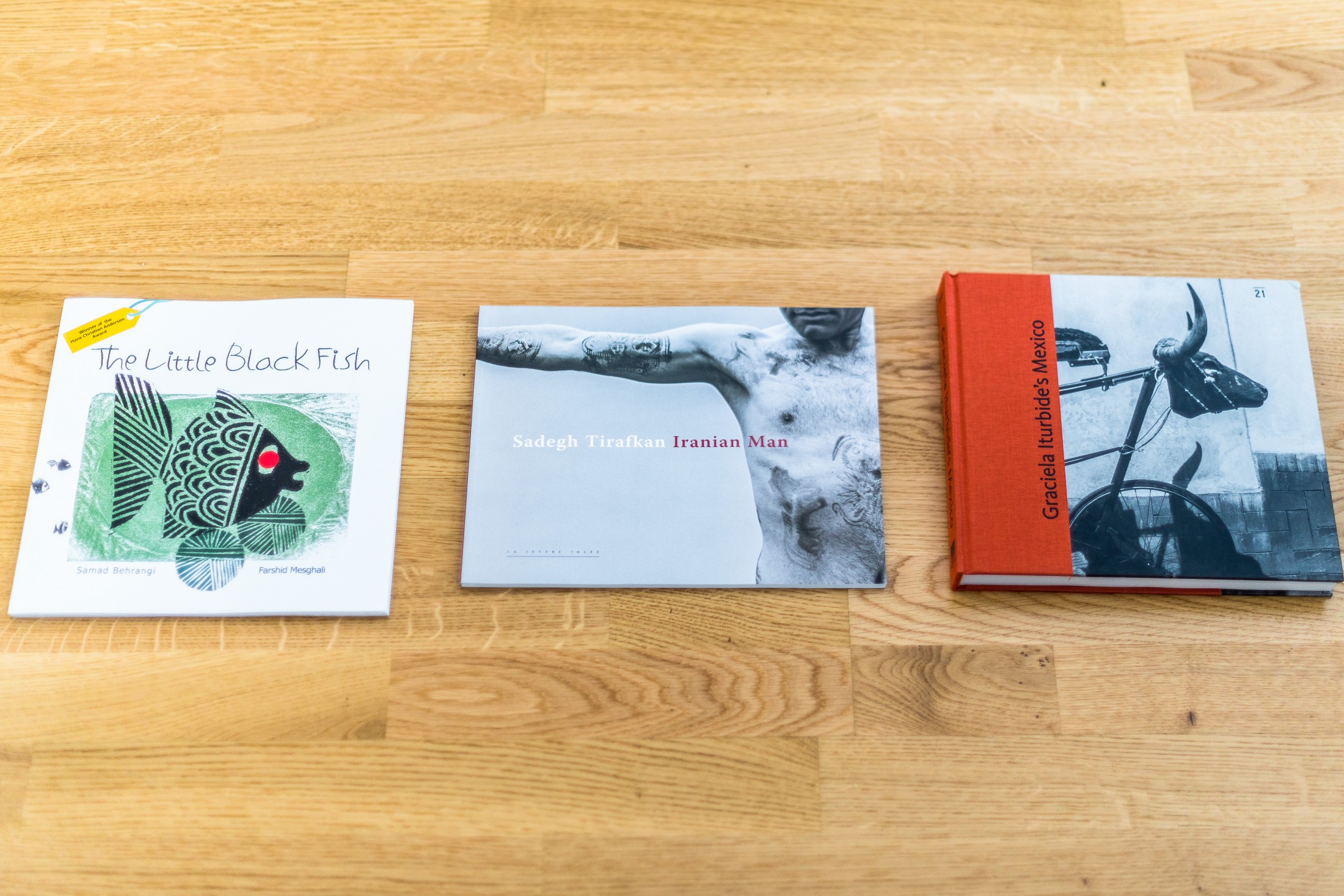 The Little Black Fish by Samad Behrangi is a classic read for generations in Iran. I had heard so much about it, so I was very happy to have found this translation from Farsi into English with the beautiful illustrations of the Hans Christian Andersen Award winner, Farshid Mesghali.

It is the story of a a fish that is fed up with his life in a pond. He decides to leave everything behind him and explore the world. When he finally reaches the sea, he has many adventures, learns how to deal with fear and meets different creatures. It was first published in 1968. The author was a teacher and died very young, having drowned in a river. Some say killed by the Shah’s secret police, since his book was considered by some as an allegory to the gap between the social classes and giving a message of hope that things could change.

My daughter and I loved it.

Sadegh Tirafkan’s Iranian Man – Continuing my discovery of Iranian photographers, Sadegh Tirafkan’s photo book seems to be a mixture of staged historical events, personal and painful events and a quest for a spiritual path. I’m looking forward to discovering it.

Graciela Iturbide’s Mexico – I always wanted to get one of Graciela Iturbide’s books, she has been one of Mexico’s most famous photographers for the last 50 years. This book has her most important photographs and several essays about her creative journey. You may know that having lived there for 5 years, Mexico will always have a special place in my heart. Besides having written extensively about my Mexican journey, I have also kept in contact with our Mexican “family”. Dear friends that will be in our lives forever.

In my quest to find new sounds and thanks to the concert I mentioned above, I discovered Christine and the Queens a French singer and songwriter who sings in both French and English.

I have been listening to her album Chaleur Humaine on iTunes while I read or work.

And that is it for this week! Stay safe, exercise, eat healthy, stay home and hopefully it will all be over soon!