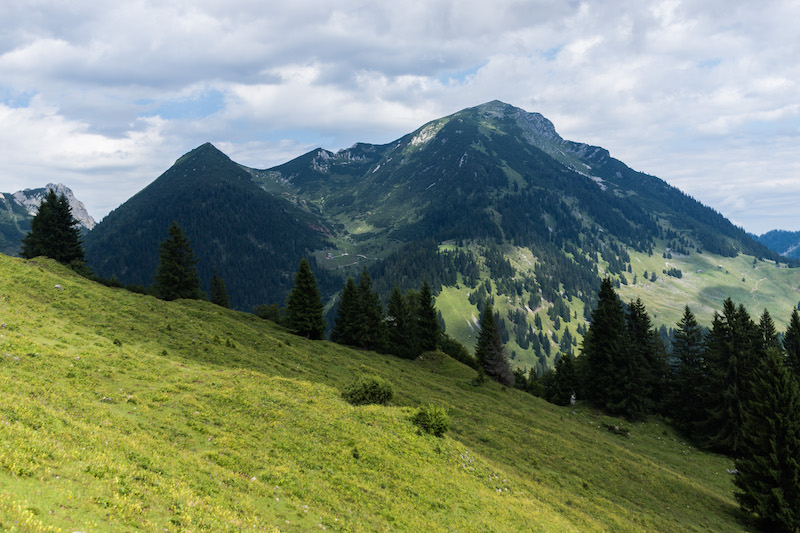 Nordic Walking in the Alps

I wonder what happened to the “easy way”. When did Nordic Walking in the Alps become more like a mountaineer adventure?

We were in Russbach, a small friendly village in the alpine region of Salzburg. We had decided to rent an apartment in the center of the village, hoping to profit from the numerous Nordic Walking routes that were offered. The view from our apartment was just beautiful with the mountains peeking from behind the forest trees. 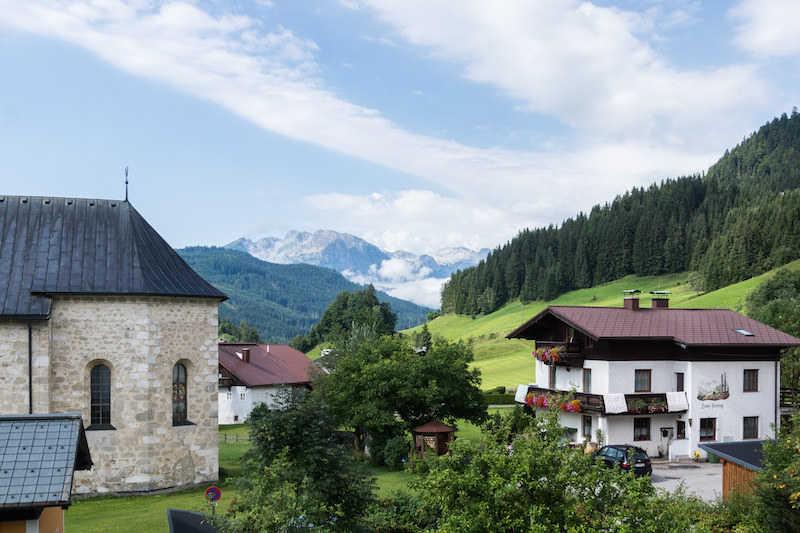 So after breakfast, we got ourselves and the sticks ready and there we went. We were ready to make an easy nordic walking route in the Alps. I say easy because I had been feeling out of shape for some time now.

Moving to Iran, settling down, getting used to a new country, all that took time and meant I ended up neglecting the physical side in order to organize my and my family’s life.

It is not like I sat around and did nothing. I moved non stop, unpacked box after box of our household and tried to find creative ways of putting everything in an apartment obviously too small to hold everything. That happens often when you change countries, you can go from a big house to a smaller apartment and you end up having to learn to adapt.

It is just that this kind of exercise is not the best. It is the type that breaks your back and exhausts you with no obvious benefits to your health or shape.

If you know me, you know I used to do a lot of Nordic Walking when I lived in Austria. So this time when I came on vacation one of the first things I did was to get my sticks and go to the beautiful Augarten park in Vienna.

It started out well, the park was as beautiful as I remembered and it was obvious my body hadn’t forgotten how to move harmoniously with the sticks. I remembered the winters in Vienna, Nordic walking in the snow. Feeling that slightly freezing morning air in my face that always woke me up. The familiar noise of the snow slowly crumbling with every step. I also thought of Spring, when the trees started to look fully dressed again in new green foliage. It was the time when the park seemed to be waking up, bringing itself back to life after a dormant winter.

And then my body started protesting, my legs feeling heavy. Suddenly even 70 year-olds looked like they could Nordic walk faster. I cursed every saffron ice cream I ever ate in Iran, even the ones that were too tempting to resist and every other dish that was too good to pass on. At the end I felt proud I had been able to finish but upset my stamina had diminished since my moving.

So in Russbach I was determined to get back my Nordic walking mojo. Knowing my limitations I told my husband I wanted to start slow. He said no problem, there are easy routes of 1.30 hours. I was all for it. We chose a route. The path started alongside a fresh stream of water. 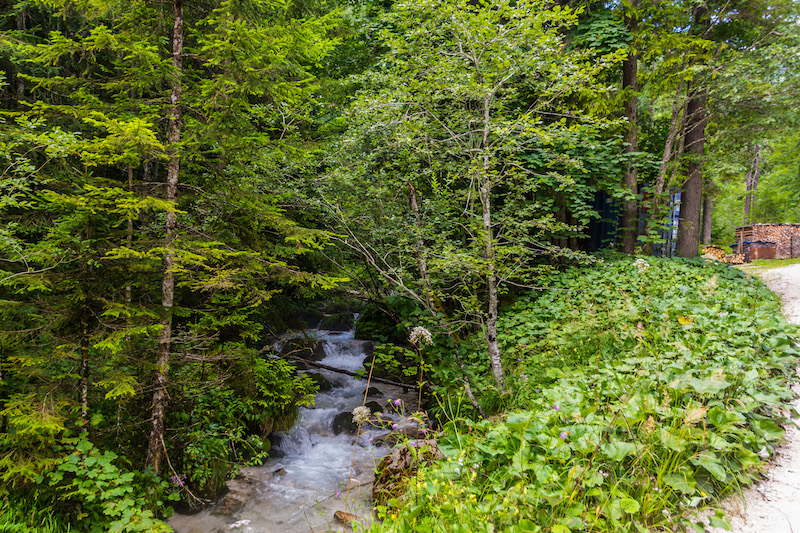 For some time we walked on a road which was fairly easy but then we encountered this sign which says ghost forest. My daughter was excited and my husband suggested we take it. I agreed thinking it would be a short path. Boy was I wrong. 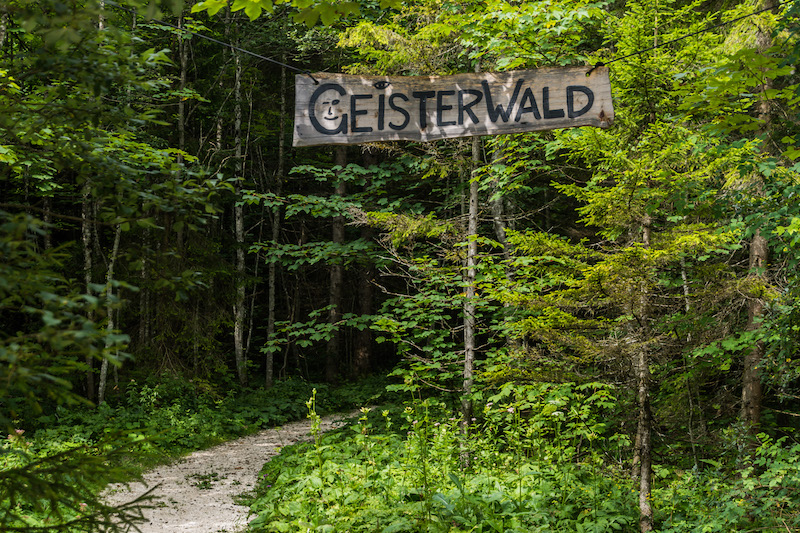 The ghost trail took us through the forest. Appropriately, it was a bit dark with the shade of the tall trees as a natural roof above our heads. It smelled of fresh moss and you could still feel the humidity of yesterday´s showers.

Then the difficulty started. We saw some people going up the trail, it did not look that bad. I asked my husband if he was sure that was the right trail. He said yes of course. Distracted as I was concentrating on the way, I forgot how he would choose more adventurous paths any day instead of the boring straightforward ones.

I also did not think how naturally fit those Austrian hikers were. It is in their genes after all. Midway up, my legs were telling me what was I thinking, had I lost my mind? There were more rocks to overcome and loose soil, I had to use my sticks as support and levers. I looked at the Austrians that were fast climbing out of sight. They seemed to be floating on air. I hated them.

One and a half hours came and went fast and it started to be cristal clear that lunch would be taking place much later than we thought, if we ever got somewhere where they actually served food.

Then I looked at my husband with my special look. The one that tells you to run but he had nowhere to go.

He started saying it wasn’t his fault. He was not born in Russbach, what did he know, he had just followed the arrows. It didn’t help my mood at all. Then he tried the, hey but this is a wonderful trail, through this beautiful forest, just breathe the fresh air, so healthy!

That was even worse, I felt anything but healthy, struggling, holding on to a tree. Then he tried a different approach. He tried to get our daughter on his side, wasn’t this fun he asked her. And much more exciting? She hesitated. Maybe, she said, but she was hungry. No problem, daddy has Austrian waffles and energy bars for everybody.

Did I really want to eat after feeling so out of shape? But on the other hand, if lunch was in 10 hours, I better eat something. We had a small break and then we continued. When and where would the trail end, I wondered. At this point we had been walking for almost 3 hours.

I felt a mix of frustration and pride I was managing to walk so far. And then I saw the blue sky, this trail seemed to be over and we got here. The view, the ghostly snow mountain in the background. It was like I had stumbled in a postcard. 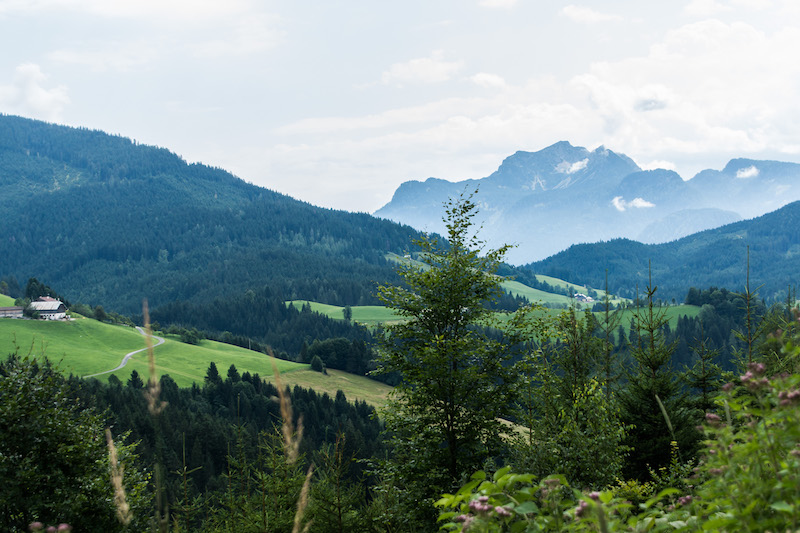 Nature has a special effect on me. Facing such indescribable beauty, I had to stop and admire. The mountains, the trees, the different shades of colours and light.

For a moment there I forgot I was going up. I forgot about the tiredness and the pain and just breathed. There was a slight breeze that brought the scents of the different trees and plants to us. I filled my lungs with it and I felt rejuvenated. It had been a while since I was in such close contact with nature.

It is a privilege to still have places such as this, where you can breathe pure air and feel alive. It felt like a renewal of my whole being. For those of us who live in polluted cities, it makes all the difference to get out and have moments like these.

So I stood there in awe, grateful that I got to see another day among such beauty. I took another deep breath and took all in. 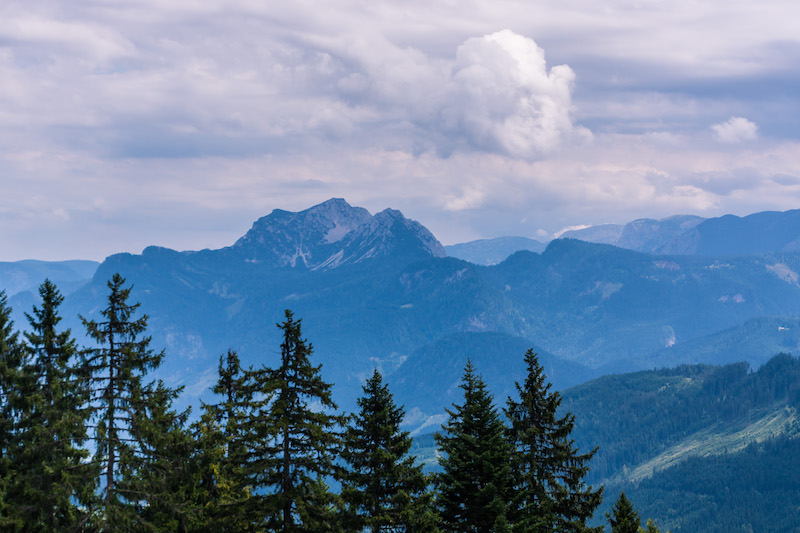 I often wonder how it would be to live close to nature, surrounded by mountains, near a forrest. Waking up to this. Would I feel isolated or inspired? Or both?

It would certainly become more difficult during winter with the snow and the cold but it would be beautiful too. I don’t really know but I feel I wouldn’t mind having a chalet somewhere and spend some quality time not only with my family but nature too. Nordic walking, trekking, writing, reading and breathing. 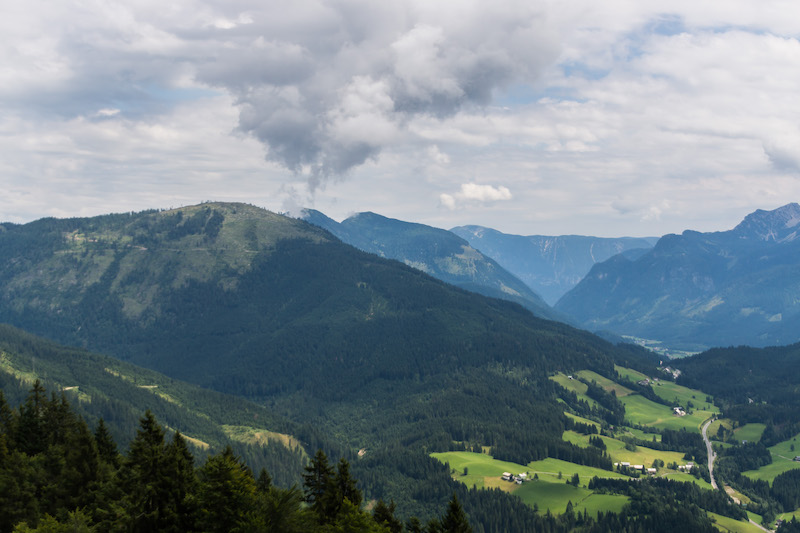 It was time to move on. We took our sticks and rhythmically continued up the mountain. Suddenly there was a bleating coming out of the trees. We approached and saw this poor goat alone. She was limping from her front leg like she had hurt herself. We looked around but there was no shepherd. We talked to her and she came to us bleating. I wish we could have done more for her. We discouraged her from following us as she could get lost. I hope they found her and she is fine. 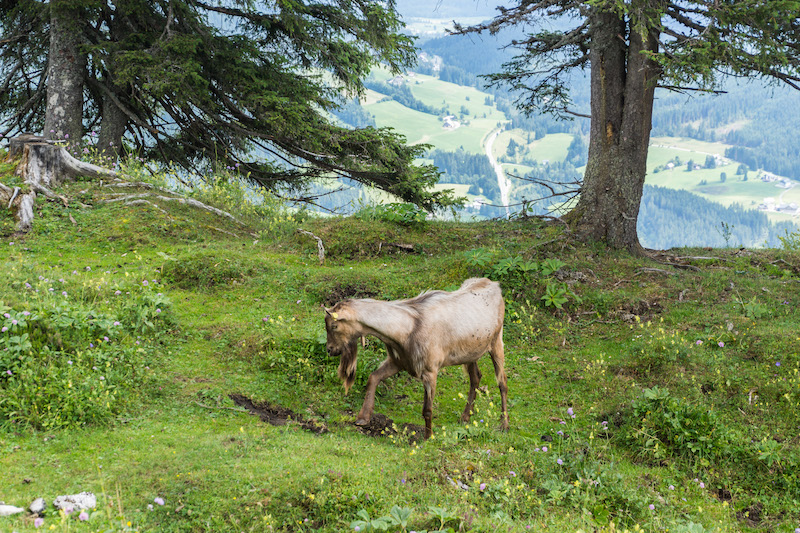 Then ahead, we heard several neighs. We stopped and waited. A group of horses crossed our road just in front of us. They seemed to know where they were heading. When we thought they had all crossed, a new one appeared.

He stopped quite near, like he was observing us and then galloped to join the others. 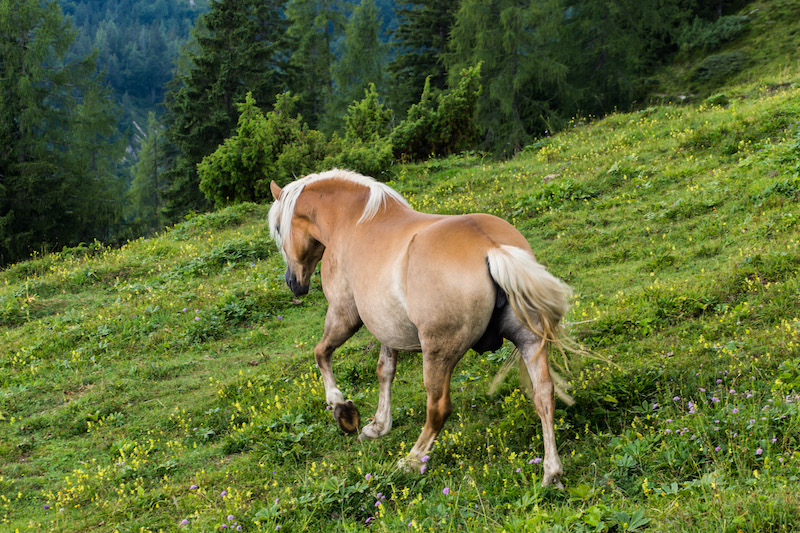 We were curious to see where they were heading. They were looking to quench their thirst actually. We stayed a bit observing them and then left silently so as not to disturb their peaceful moment. 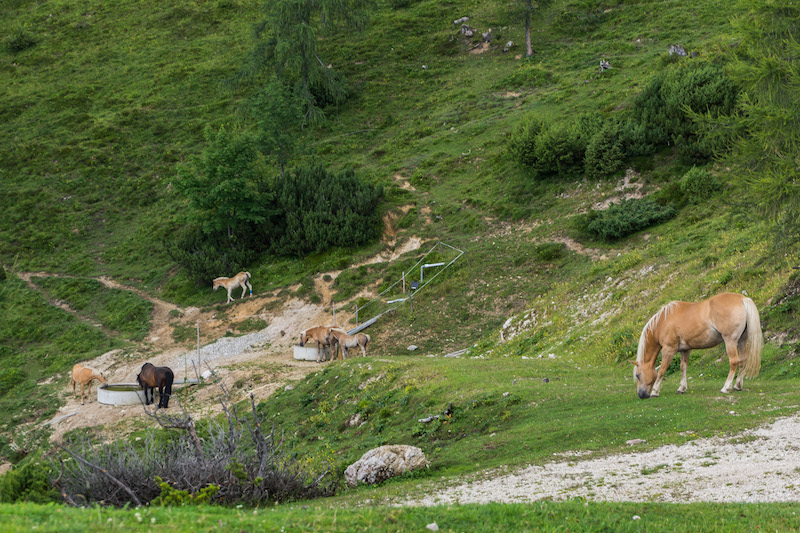 At this point, after walking for more than 4 hours we were feeling pretty hungry. A while back we had seen a sign advertising a “Hütte”, a small restaurant hut in the mountains. I was praying for it to be near and then we saw another way marker.

Encouraged by the proximity to food our pace increased, but I still noticed other animals enjoying the afternoon shade. 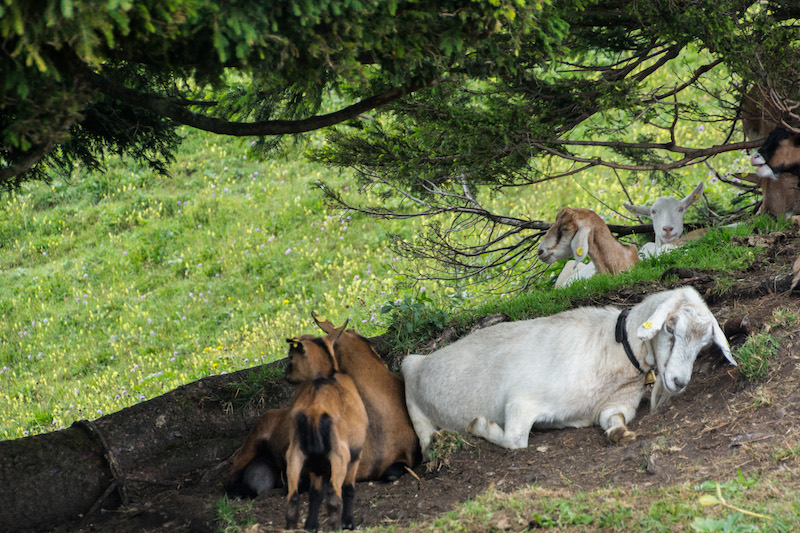 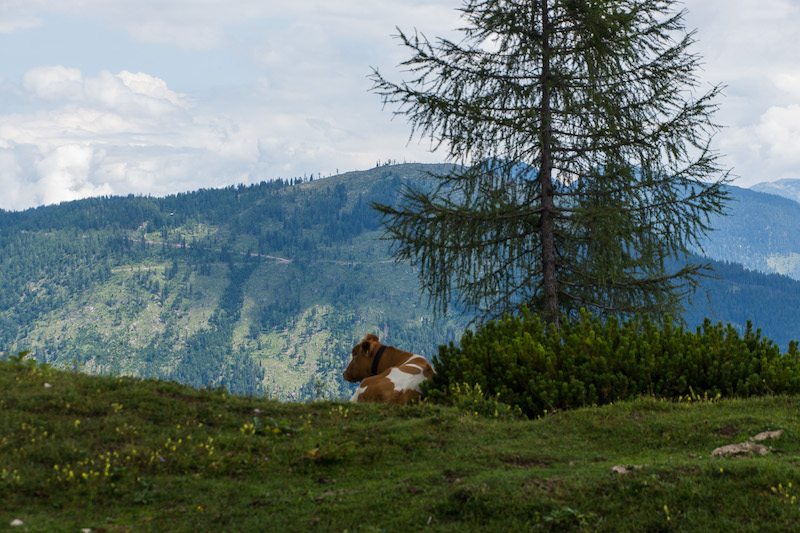 We had finally arrived. The owners of the “Hütte” greeted us with a smile. It was a bit late for Austrian standards but they generously told us we were welcome. The menu was simple and typical Austrian. Sausage soup and sausage served with bread, mustard and ketchup. Starving we chose one of each. 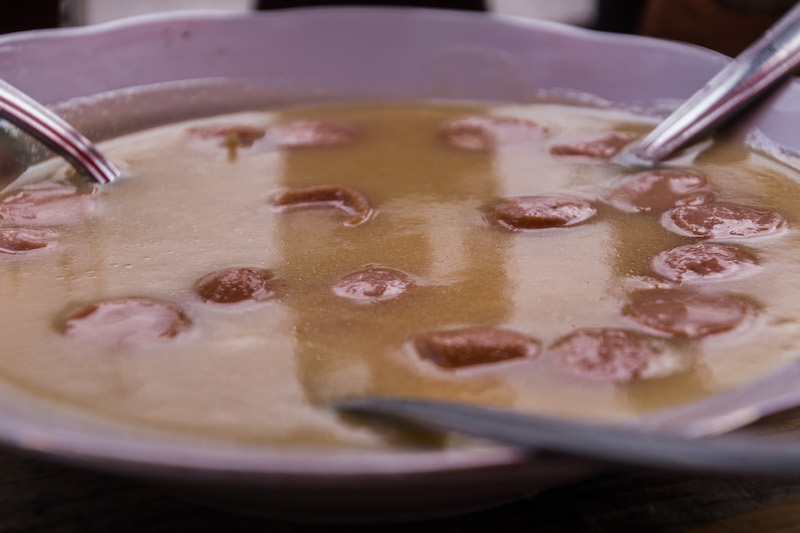 The soup was comforting and filling and the sausages were delicious. We shared everything, regaining little by little our strength. For dessert they had one of our favourite desserts, “Kaiserschmarn”. It is a sweet shredded pancake, traditionally accompanied by plum jam. But some people also use apple, strawberry or lingonberry sauces. Originally the pancake was made with raisins that had been immersed in rum. When it is well done, it is just wonderful. 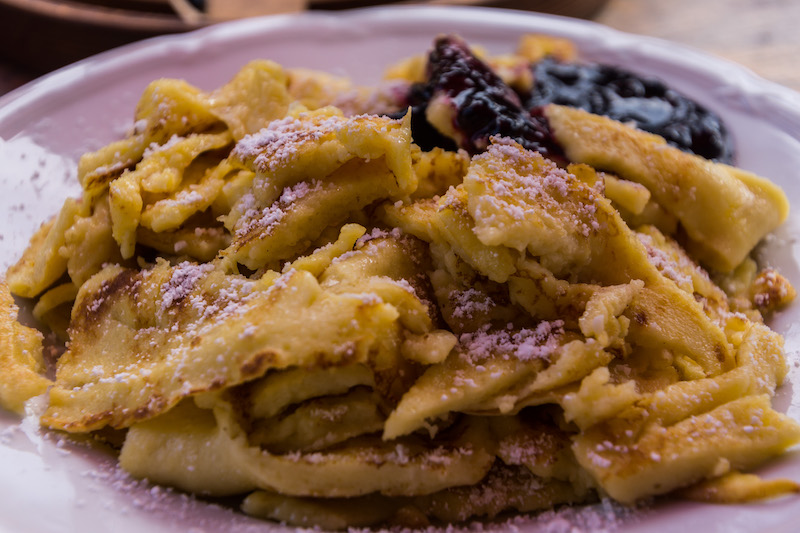 While we waited for our food and looking at my daughter, the lady of the house brought her a traditional Austrian game to entertain herself. My husband did not remember playing it but we all had fun trying to spin the balls into the holes to score as high as possible. 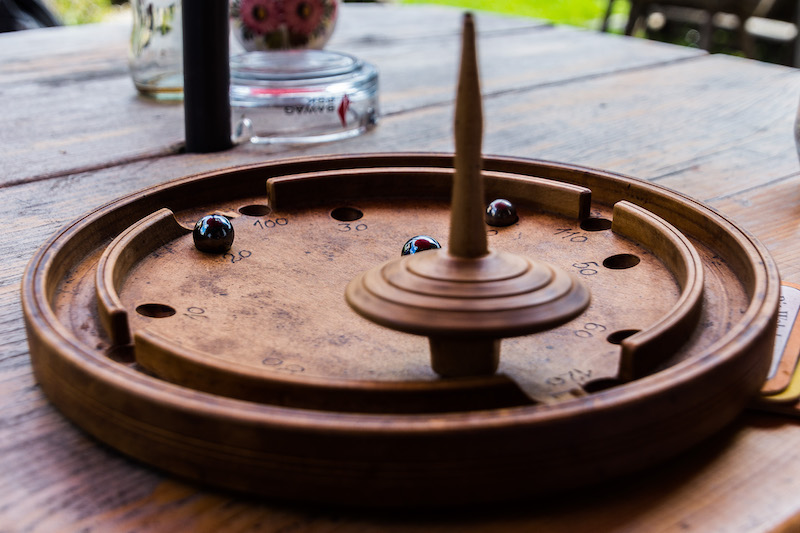 If you are interested in knowing more about Austrian villages dedicated to nordic walking and trekking, you can check out this website.