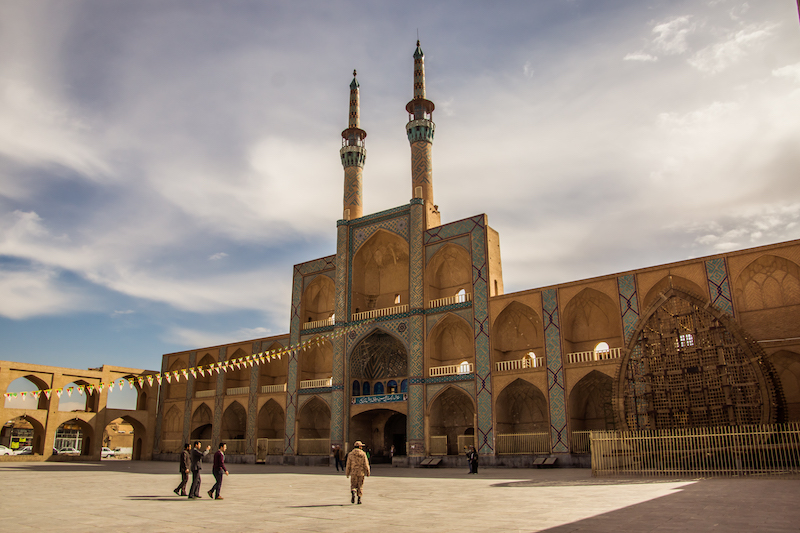 Yazd, the pearl of the desert

I realize that it has been a while but sometimes life shows you that you have to slow down, take your time, renew your path. I never stopped traveling though, so I will take you along now and show you the Iran I’ve been discovering since February of this year. And what better way to come back than by taking you to Yazd, the pearl of the desert, a place that touches everyone that crosses its way.

How I missed being on the road again! Although we had travelled before in Iran as you may know, this was to be our first trip with our new car. I was curious about how it would perform but above everything, it was just nice to sit, relax and enjoy the ride. Knowing you can just stop anywhere you feel like it, make your own schedule and take your time to fully appreciate and explore this country is priceless.

We had chosen Yazd as our first destination, a city in Central Iran with a desert type of climate and warmer than freezing Tehran at that time. A leg of six or seven hours awaited us but I didn’t mind. I wondered about the landscape, whether or not it would be similar to the one we had seen when we travelled to Isfahan.

It did not disappoint, if anything the landscape was even more beautiful, colors more pronounced. I usually write or read in the car but this time it was hard to keep me from looking out the window. The lighting and tones kept changing like someone was playing with a color palette. A little more yellow here, a bluish, grey tone there, lighter, darker. 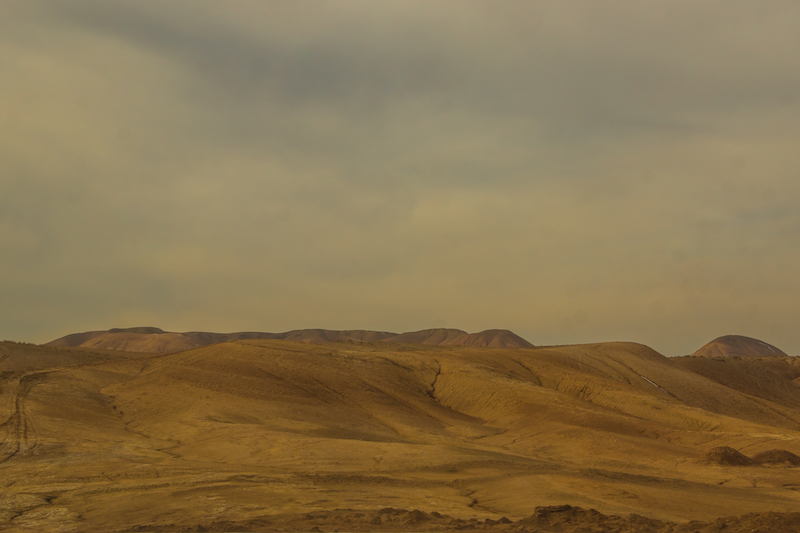 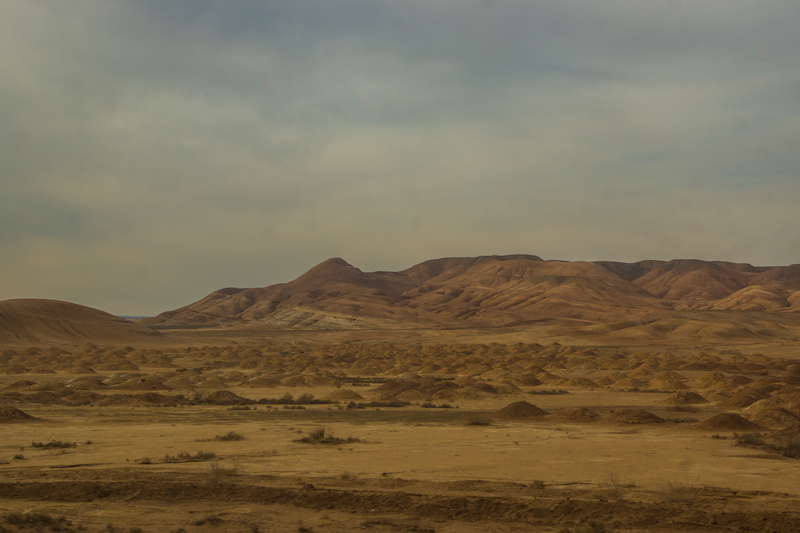 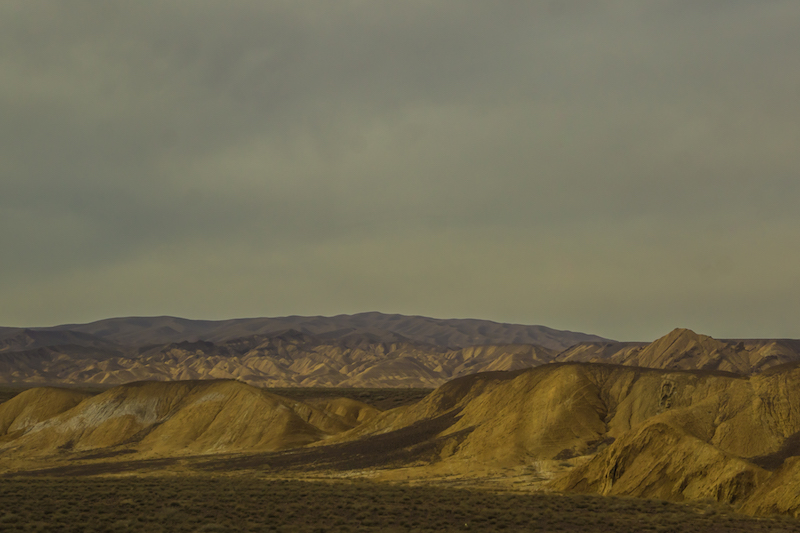 Early morning, the traffic was light in contrast with the usual congestion in Tehran. Only commercial trucks seemed to be going our way, trying to be as fast as possible to deliver their merchandise. 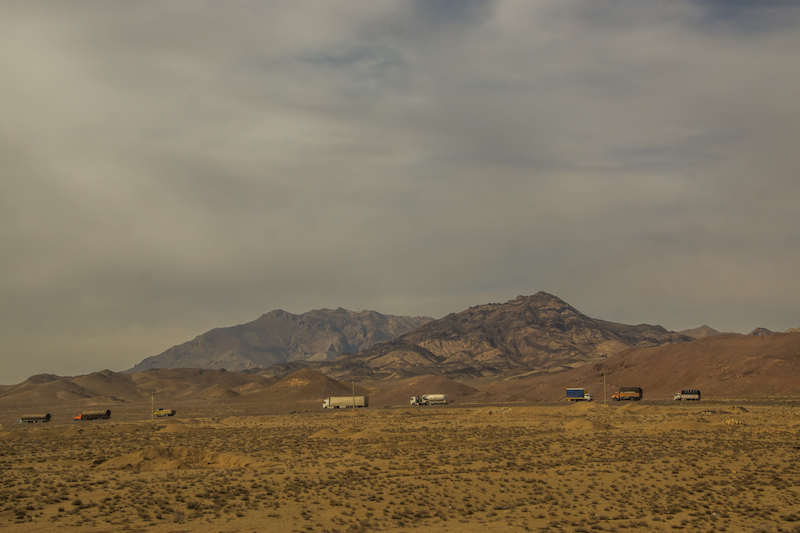 Seeing these trucks made me wonder about Yazd as an ancient trade post. How I wish I could turn back time and accompany the caravans in the desert taking the fine silk of Yazd, its textiles and carpets along the ancient silk road to India and Central Asia. Or follow in the footsteps of Marco Polo when he visited the city in the 13th century and called it a good and noble city, praising its important trading activities.

It was getting dark when we arrived at Yazd, the sun was slowly setting and once more the landscape was breathtaking. 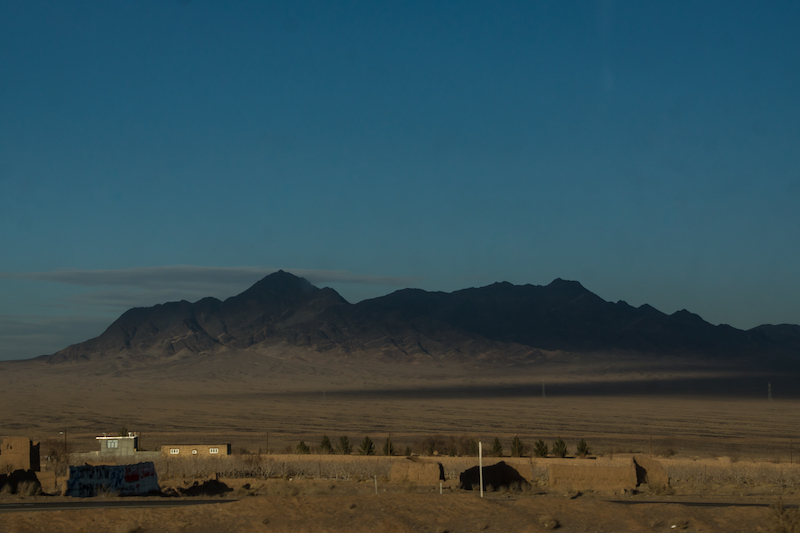 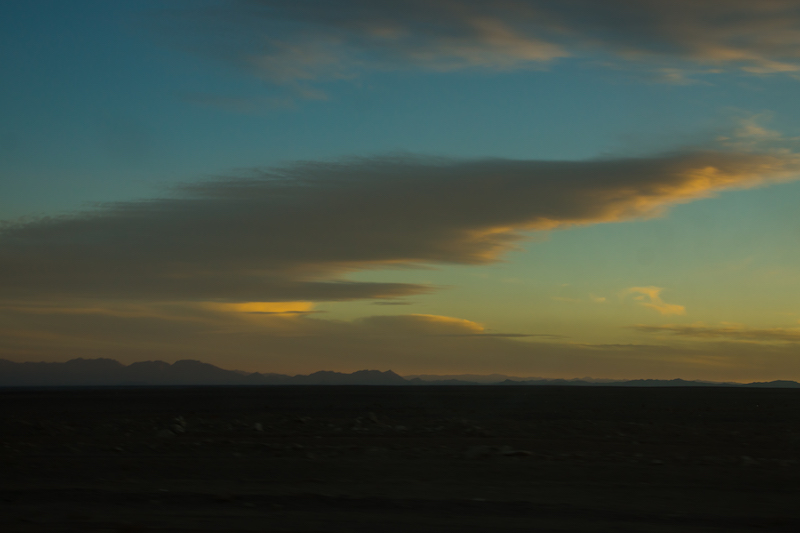 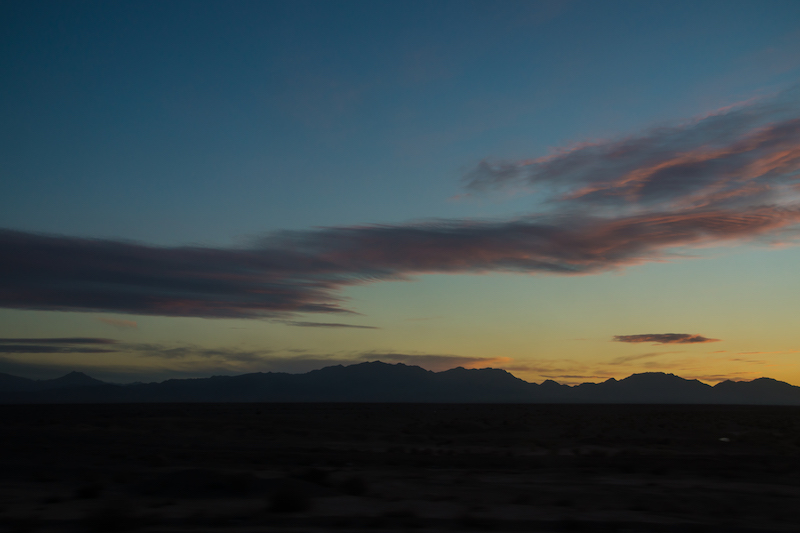 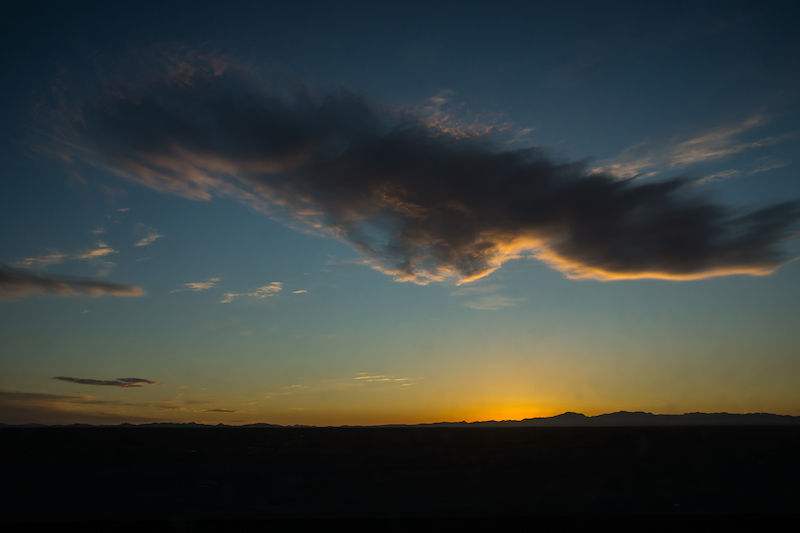 We woke up early to the songs of birds in the charming Moshir al-Mamalek Garden hotel which, with its traditional architecture and gardens dating from the Qajar era, provides a peaceful base not far from the city center. 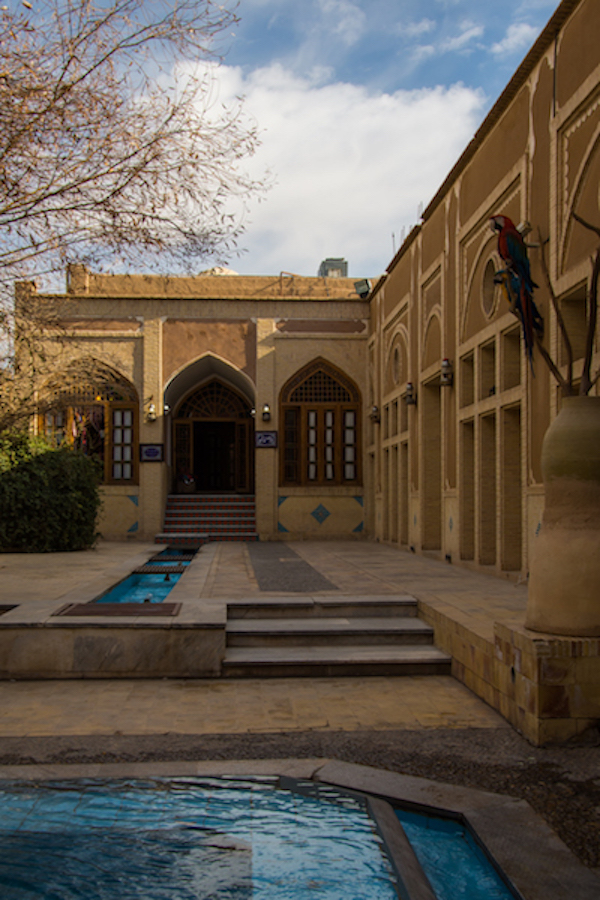 But we were anxious to start exploring the city. Our first stop was the Amir Chakmak square that is named after a 15th century governor of Yazd. The most important building is no doubt the Amir Chakmak complex which included a mosque, a bathhouse, a house of dervishes, a school, a caravanserai, a water well and the three story Teykeh.

The Teykeh was a place to mourn Hussein the grandson of the prophet during the festival of Ashura that marks Hussein martyrdom in Karbala, Iraq, in 680 CE. Associated with the mourning rituals was also on the right side of the picture, the beautiful wooden palm structure of the Nakl.

But it is when you approach that you can admire the intricate work of the sunken alcoves and the impressive tile work. 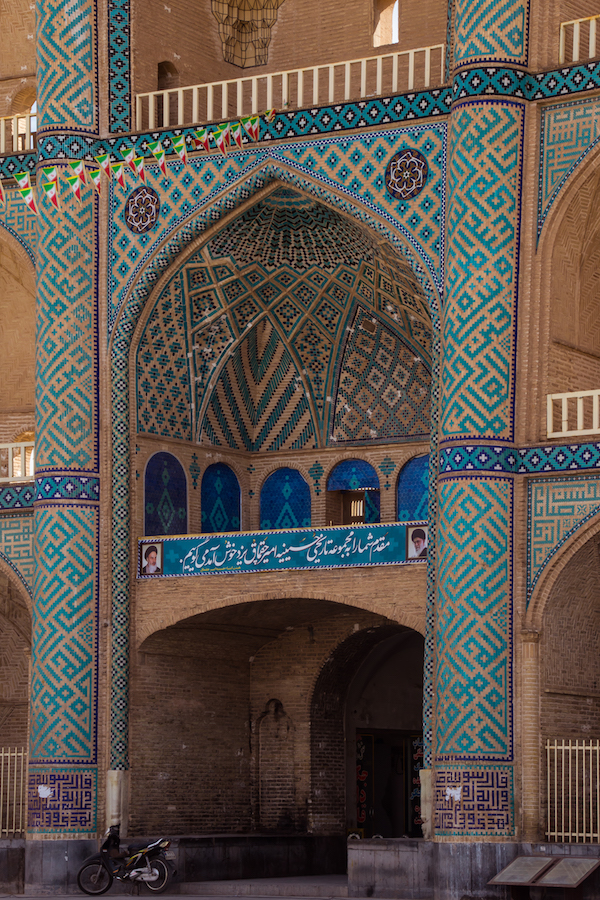 Crossing the threshold, you find the welcoming shade of a shopping arcade. 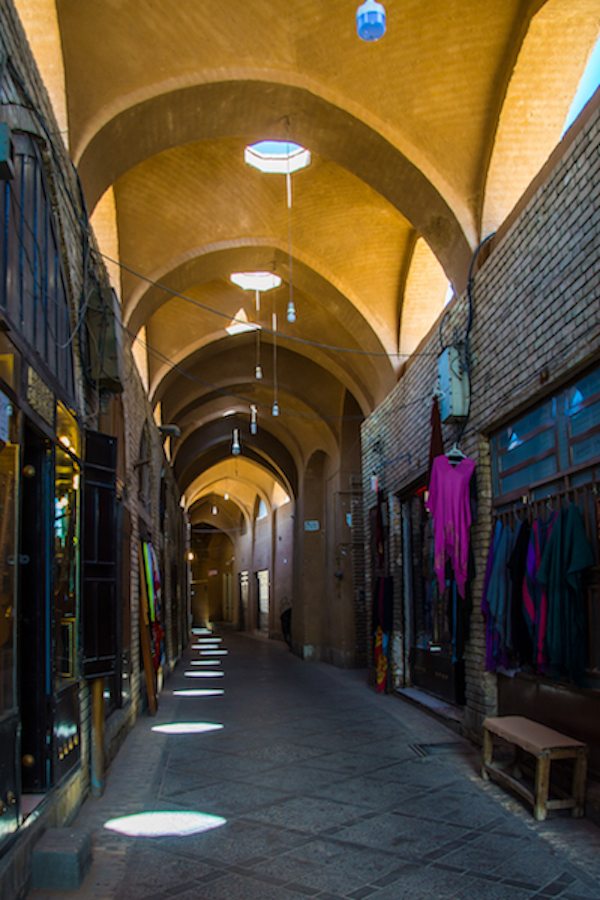 Shops were starting to show some activity and there was a wonderful sugary smell of candy coming out of a small shop. When I approached and I smelled saffron, I recognized what it was. The crystal candy sugar that Iranians use to sweeten their tea. Saffron is usually added to the sugar. The taste is wonderful but this saffron sugar is also claimed to have health benefits. If you are suffering from a stomach problem, you add it to boiling water for a few minutes and it is guaranteed to improve your condition.

I’m used to the individual sticks of saffron sugar but I had never seen such big slabs of it. 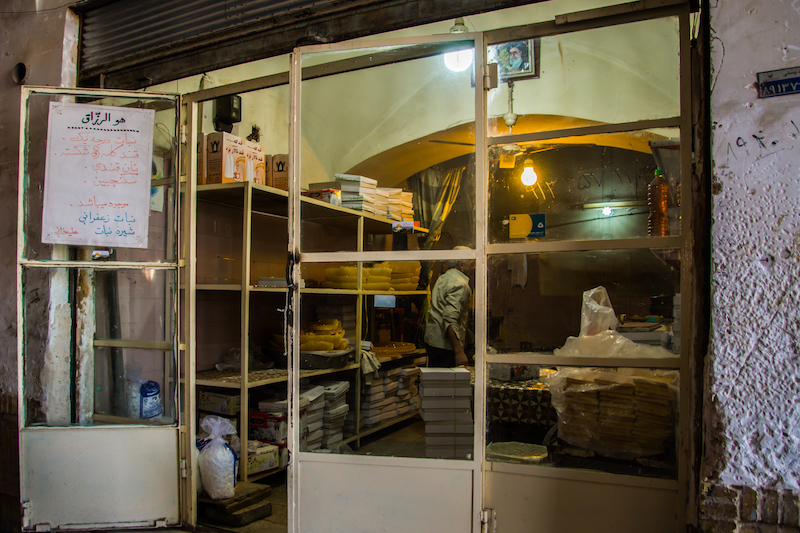 Leaving the scent of candied sugar behind, It was time to explore more. Coming back out into the square, the city looked like it was slowly waking up to its natural rhythm. We could see the famous wind towers of Yazd, the natural cooling system that traps the air and cools it down to provide freshness to the houses. The most effective natural air conditioning there is. 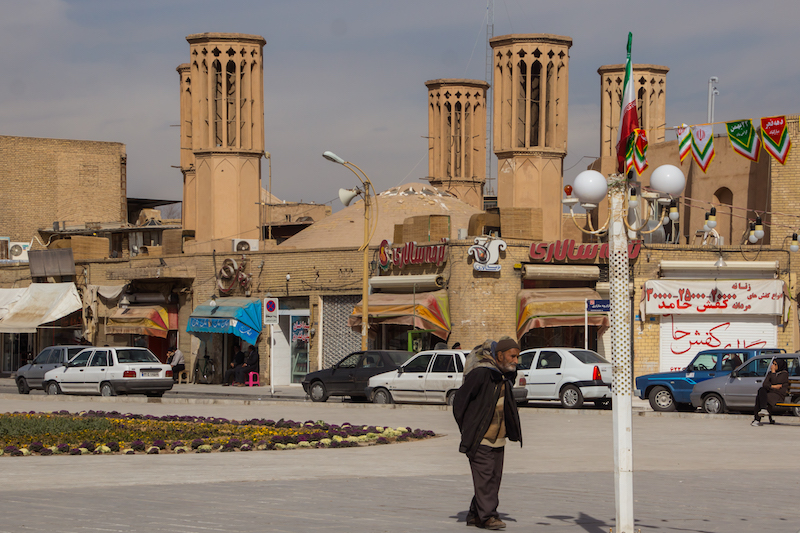 There were small vendors here and there, displaying their products and ready to welcome customers. 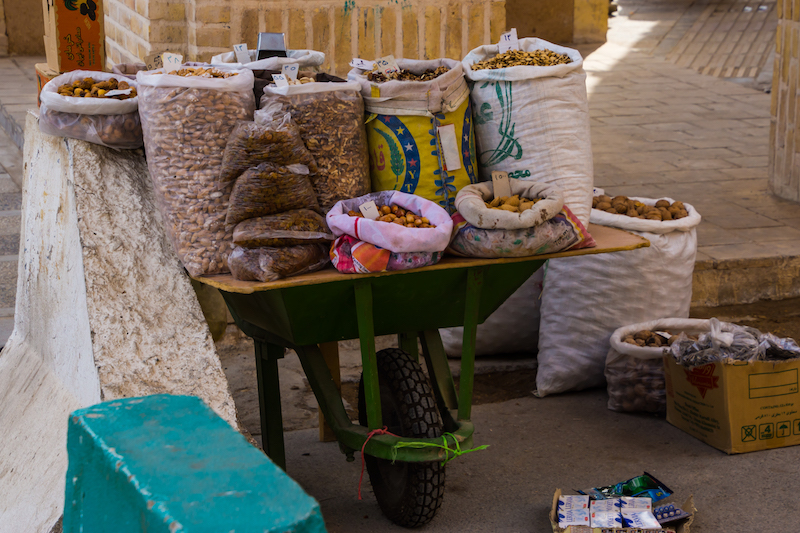 Across the street we saw the famous Haj Khalifeh Ali Rahbar, a wonderful sweet shop and mandatory stop when you visit Yazd. We decided it would be a great idea to buy some sweets to get us through all the walking and exploring we were preparing to do.

The business has been run by a partnership of three families for over a 100 years. The pictures of the founders greet your arrival and then the difficulty is to choose among the several boxes offered with the different assortments of sweets . 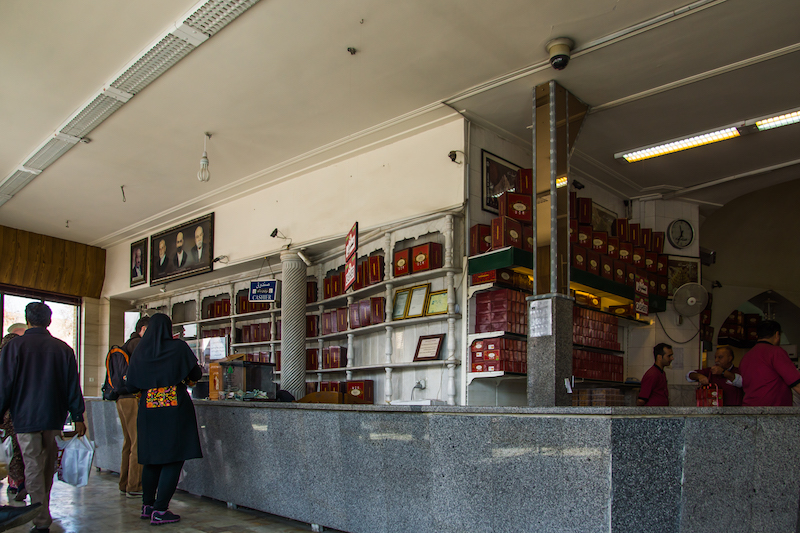 We chose a small box with pistachio, almond and coconut flavors and we loved it. The only thing that stopped us from eating more was the probably high calorie count. 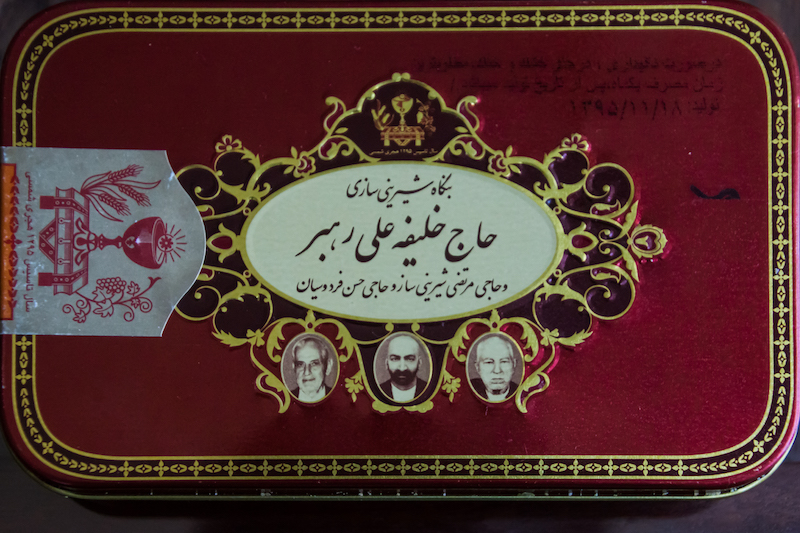 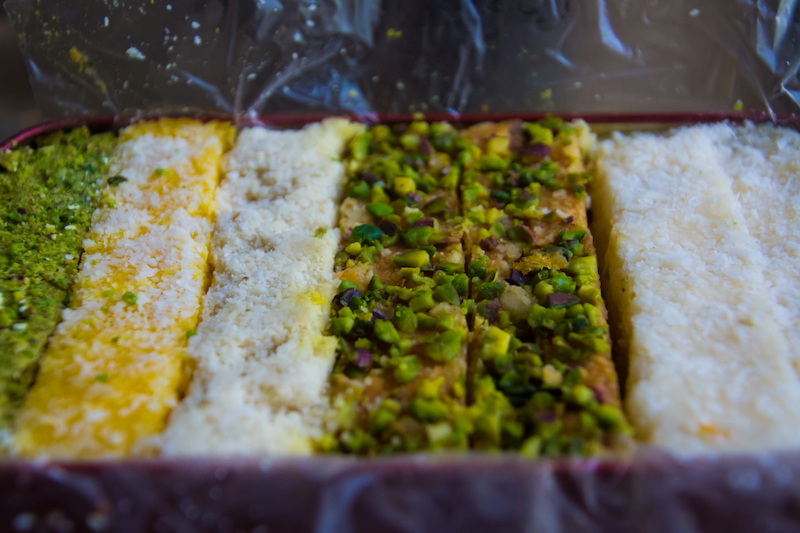 Ready to explore and just a few steps away we found the Water Museum. 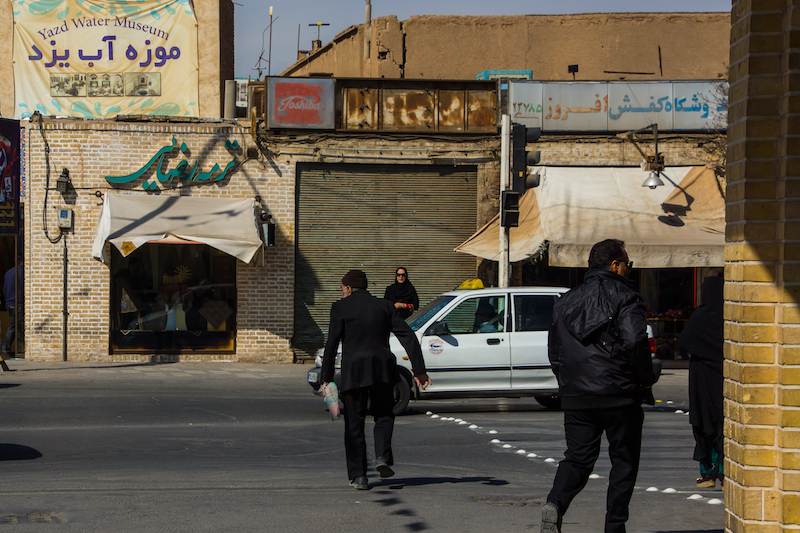 In a desert city like Yazd, finding water sources and distributing them effectively throughout the city was essential. That is where the Qanats played and still play a major role. First the water source needs to be identified, it can be at a depth of more than a hundred meters. Then they build an underground tunnel that will distribute the water to where it is needed, mostly for drinking and irrigation purposes. For 2000 years, Iranians have been digging Qanats  and there are still cities that rely on Qanats for water.

When you enter the water museum, you don’t know what to expect, but then you find yourself in a beautiful 5 floor restored Qajar era house built in the 12th century by a wealthy merchant. The architecture is impressive and there are two Qanats that run in the underground of the house. One of them, with an extension of 75 km, is still in use. 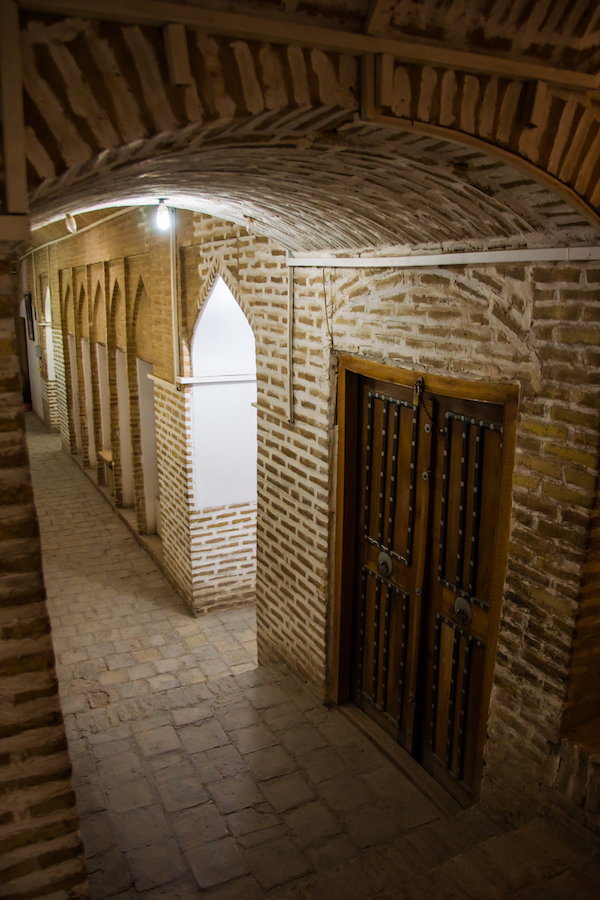 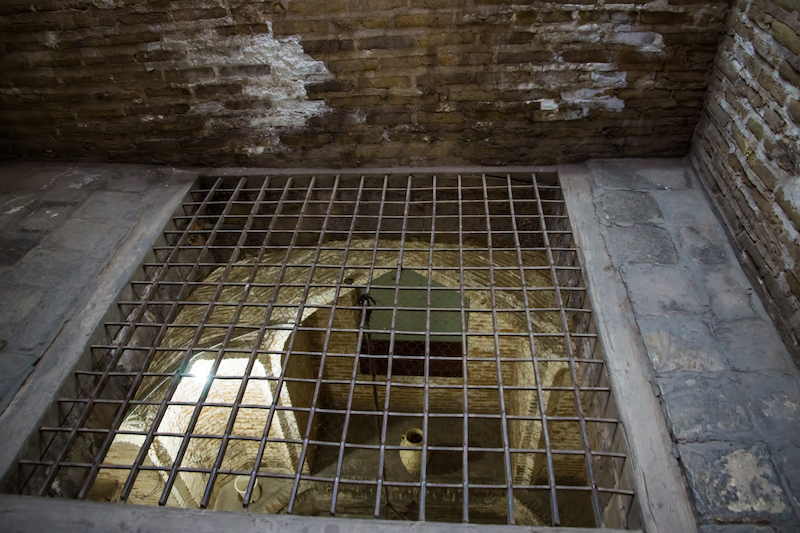 In the museum, you not only learn how the water was distributed throughout the city but also how things in a house this size were organized. 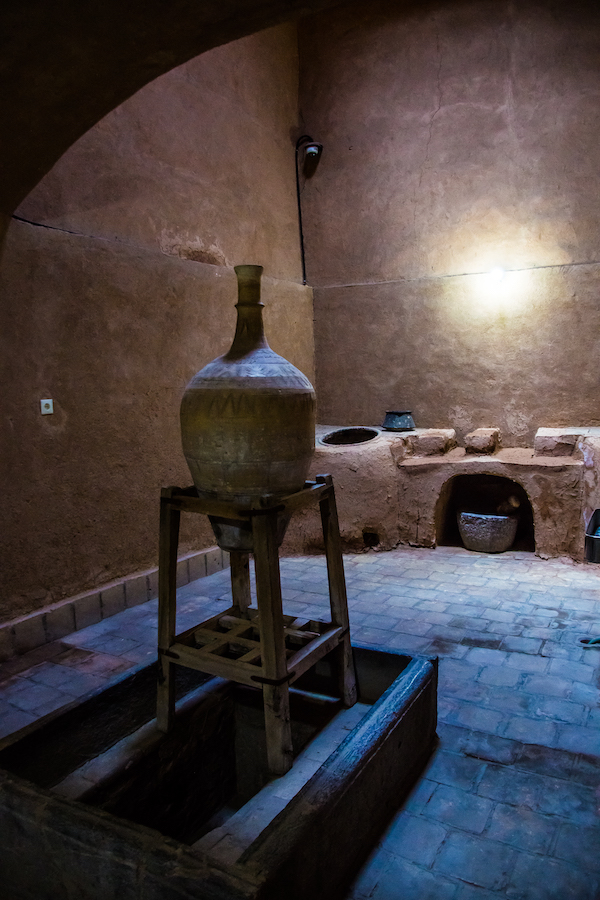 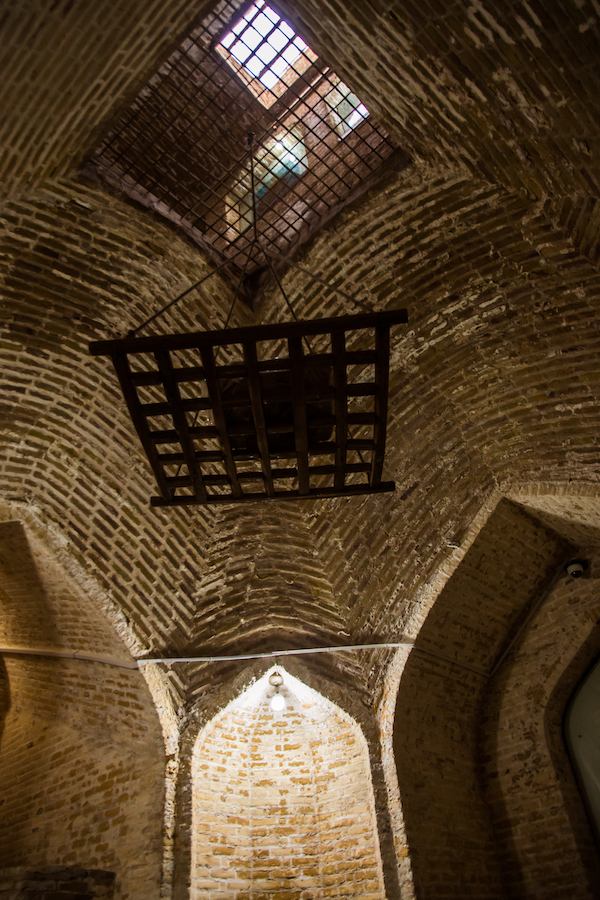 But also you can’t help admiring the architectural design, the detailed ornaments and imagine how it must have looked in its prime. 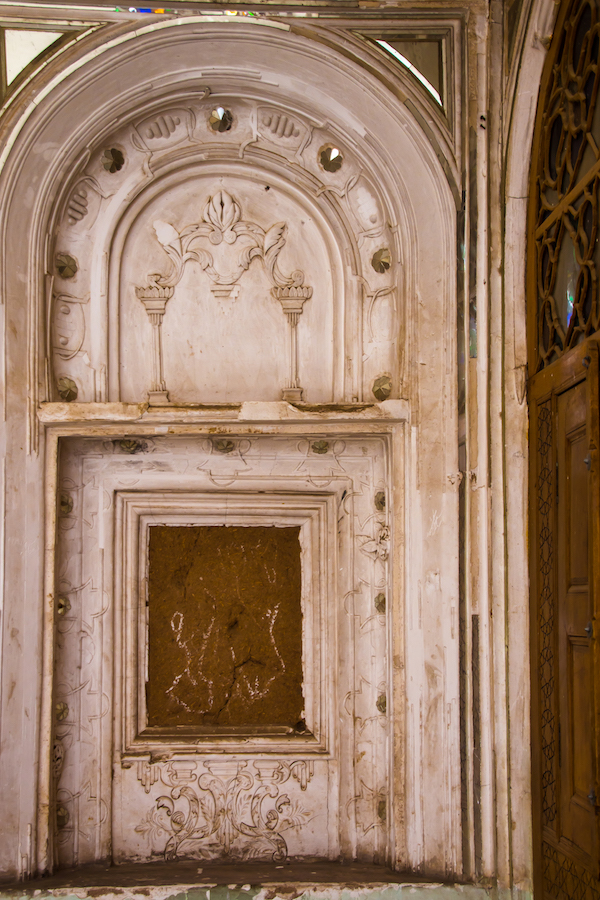 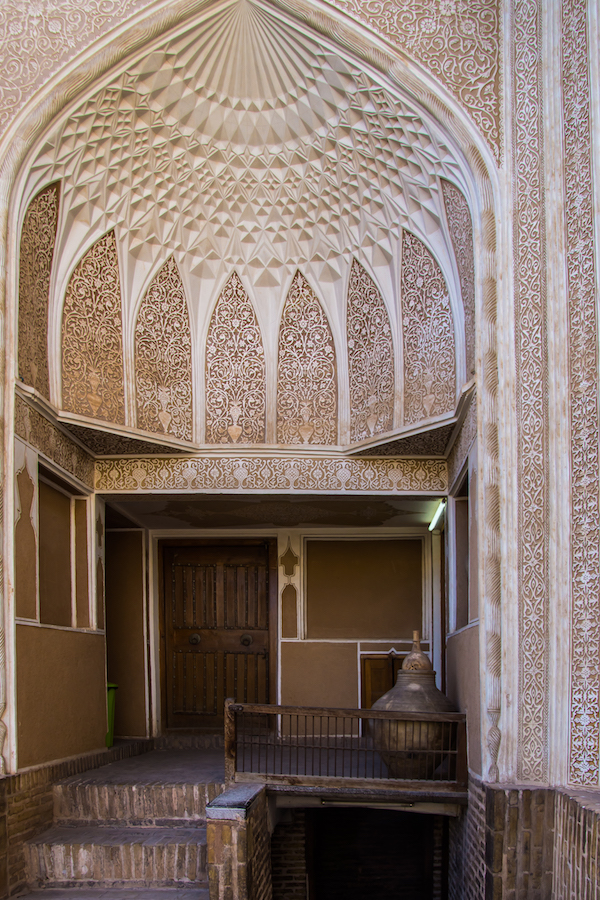 Walking the streets in the direction of the Jameh mosque, our next destination, there was so much that caught  my eye, the architecture, the alleyways, the small details of everyday life. 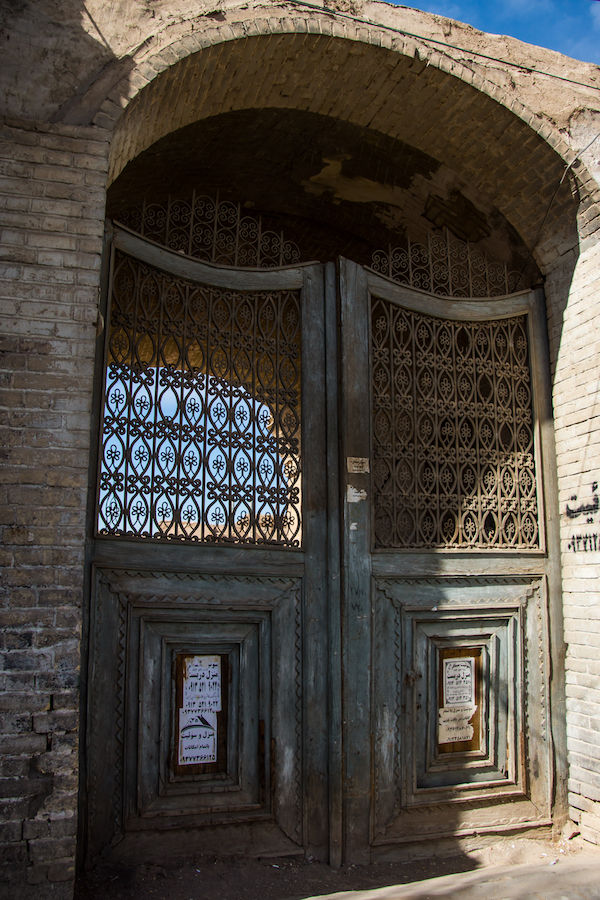 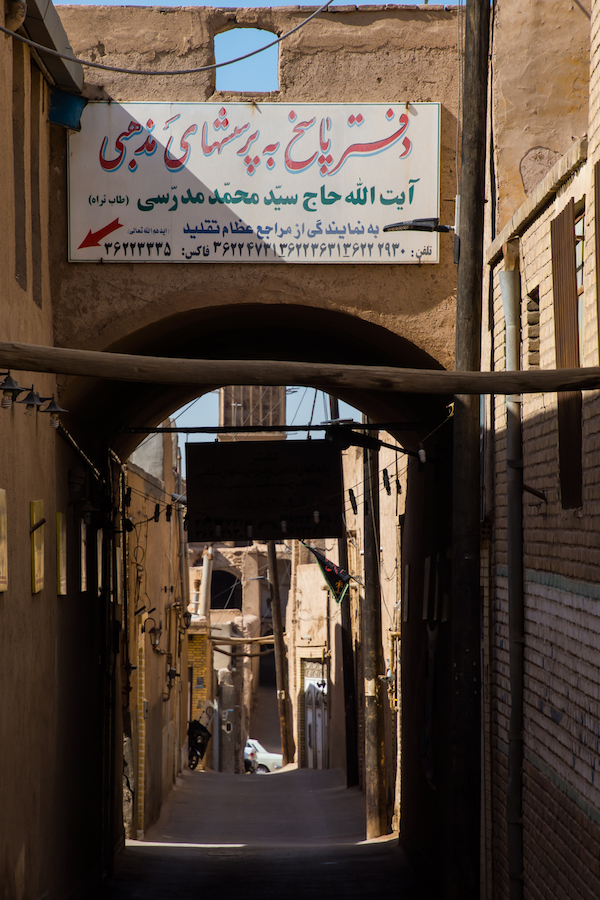 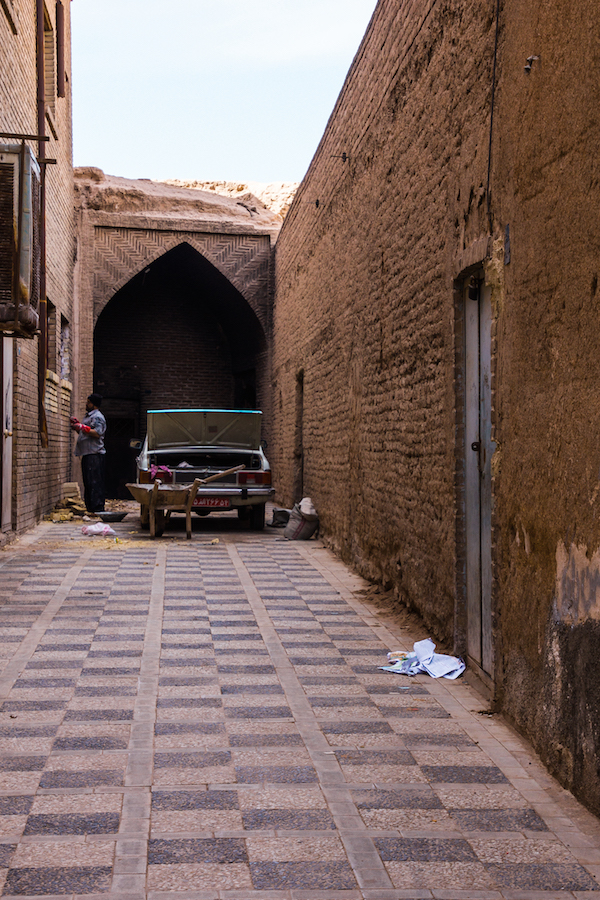 Yazd is really a very special city and there are many sides of it that I would like to show you. So stay with me and very soon, I’ll take you to explore more.