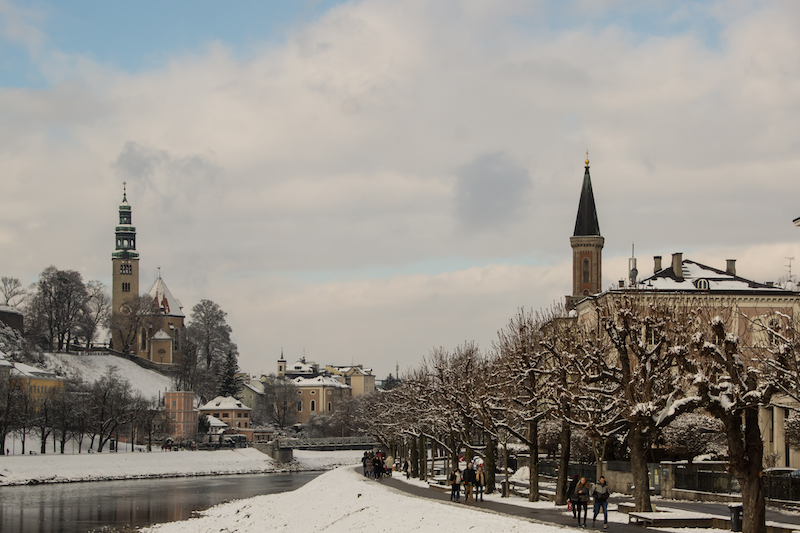 When I went to Austria this past Christmas and New Year I had been secretly hoping for snow. A contradiction as I’m known for not being a winter person. I really don’t like the cold and darkness that winter brings and at different points in my life snow was more a liability than a pleasure. That is until I went to live in Austria.

After sunny and warm Mexico, going to Austria was a bumpy transition. It was difficult to adjust as I’ve mentioned before. But then there was snow. I thought I would hate it like I had previously in a different environment. But I didn’t.

There is this wonderful park near our apartment in Vienna, the Augarten. I’ve written about it and photographed it extensively. In the winter even if there isn’t sun, if there is snow, there is this brightness that has a calming soothing effect.

I would wake up early in the morning, prepare my daughter to go to school and after I bid her and my husband farewell I would go to the park and do nordic walking for one hour, sometimes more. I loved the freezing air in my face but above anything else, the bright white blanket and the noise of crushing snow under my feet. I felt energized and ready to face the day.

So going back to Austria this winter gave me hope I could relive those moments. But Vienna had no snow this year. I felt cheated and disappointed although it was wonderful to be in Vienna and go to all my favorite places once again.

Then we thought about Salzburg, a city that had always enchanted me. Get away for a few days, chase the snow. And there it was, waiting for us, timidly at first. A few touches here and there. 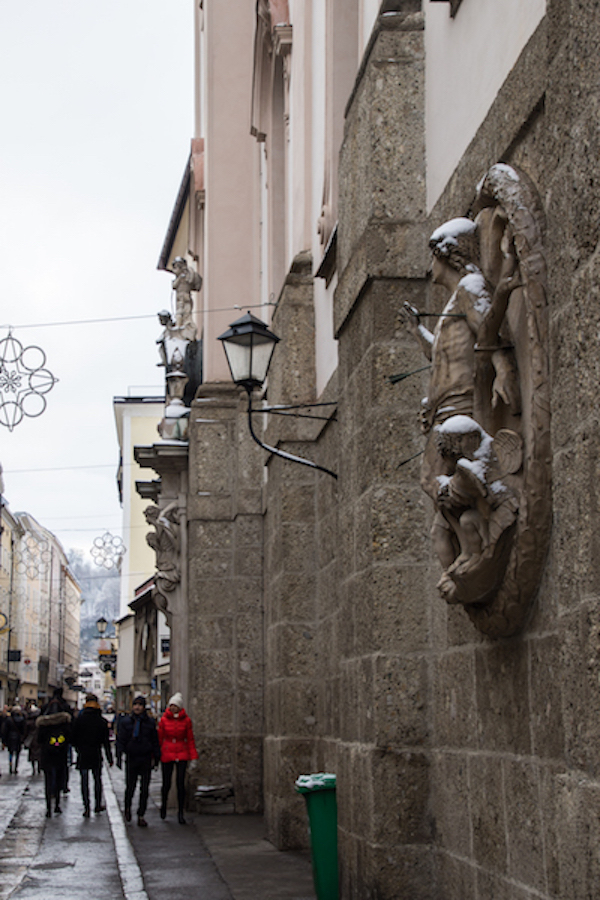 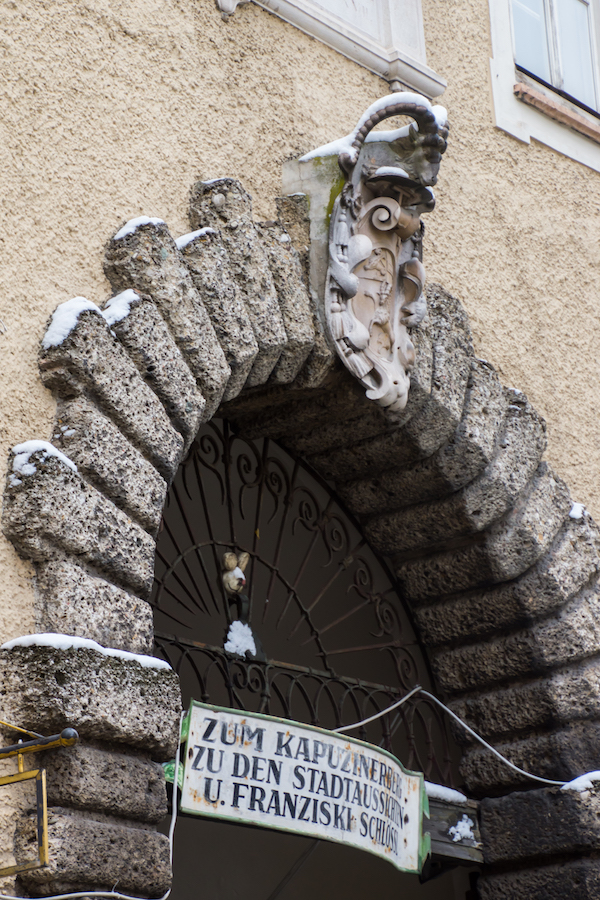 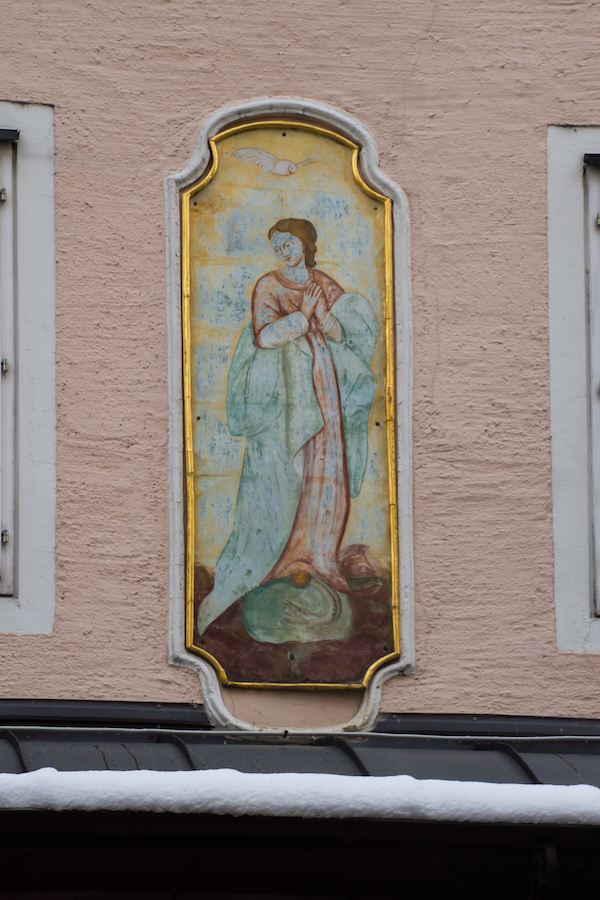 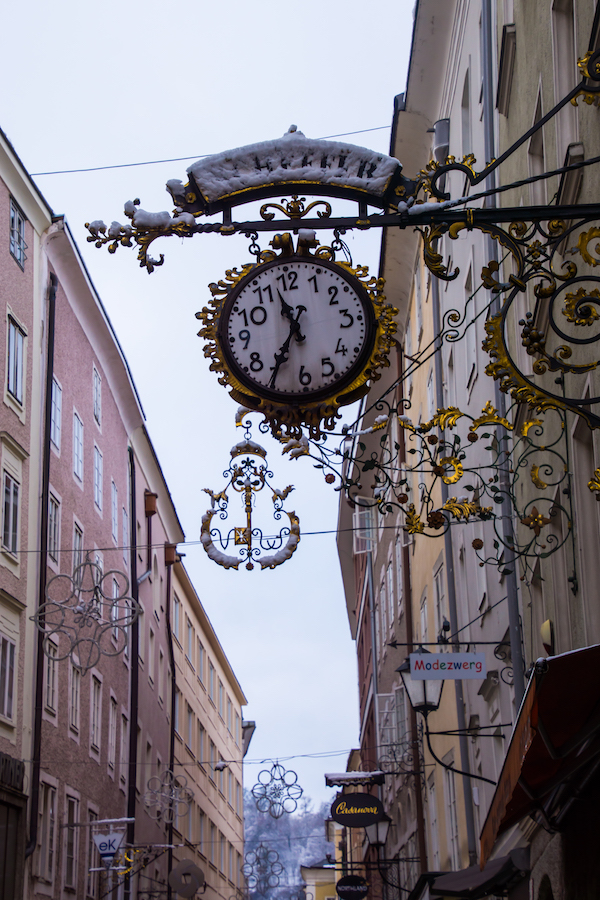 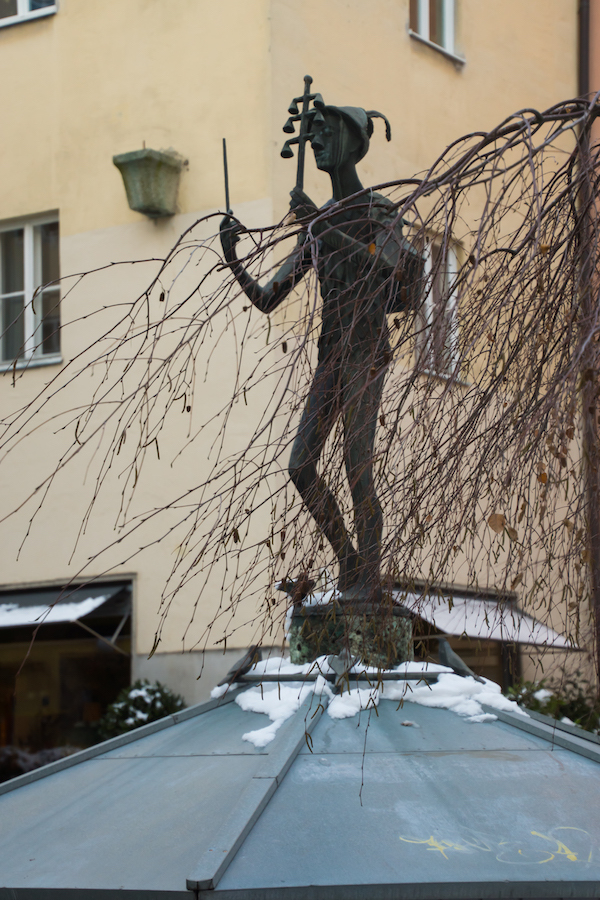 But then as our stay progressed, it got bolder, covering Salzburg in white, making it even more beautiful if it is possible. When it snows in Austria it always feels like it is done in a calm orderly way. A contrast to Tehran where its beauty contrasts with a sense of chaos and fussiness when you go outside or deal with the traffic.

It all reminds me of the Turkish author Orhan Pamuk’s book “Snow”which I read a few years ago.  Along the book the snow is one of the main characters. Always present but ever changing as the plot progresses. At times it is pure and has a calming effect, other times it can have an isolating effect or a dark heavy side just to give a few examples. In my case there was nothing negative this time around. But there were different stages also as we explored the city, light, heavy, bright, calm, inspiring. 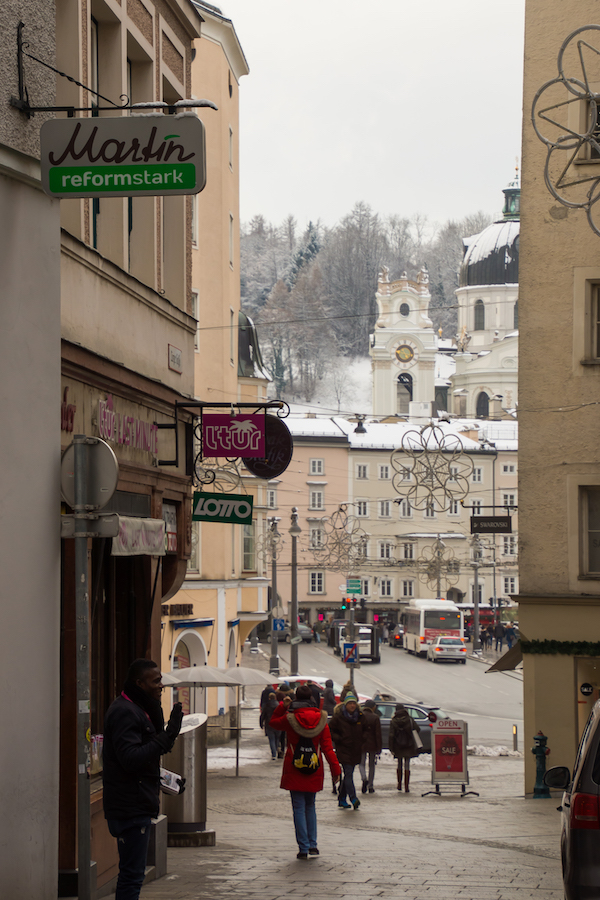 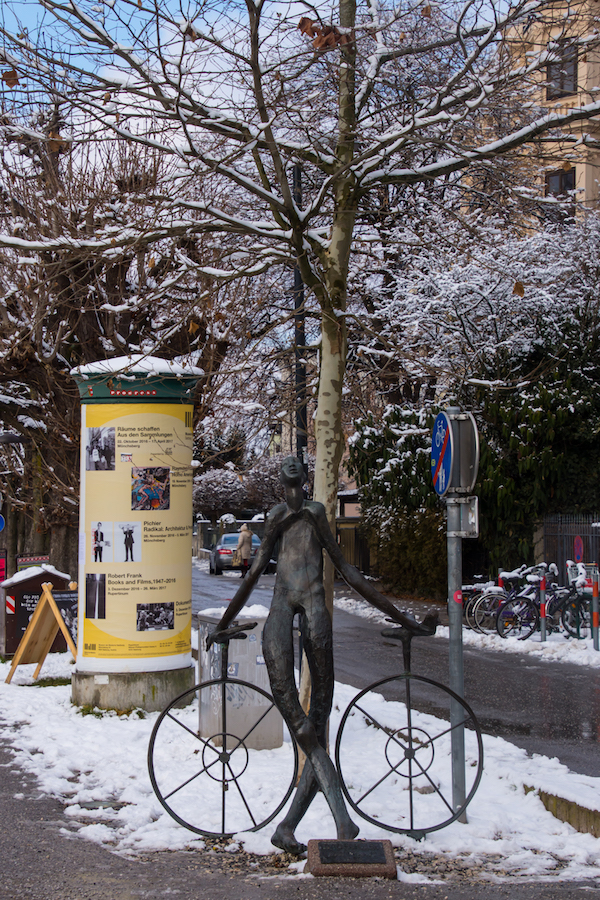 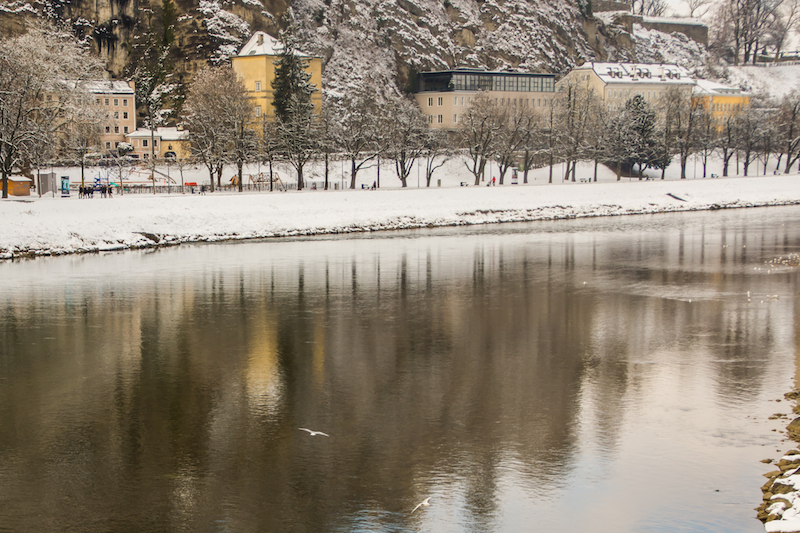 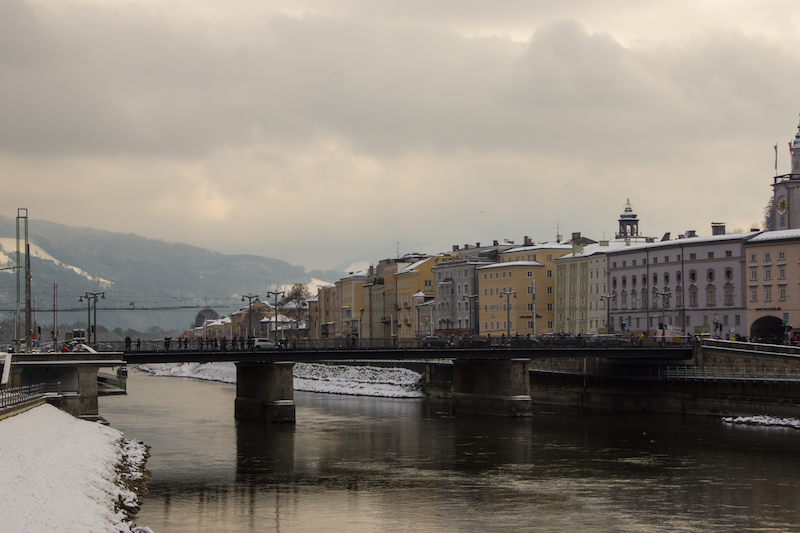 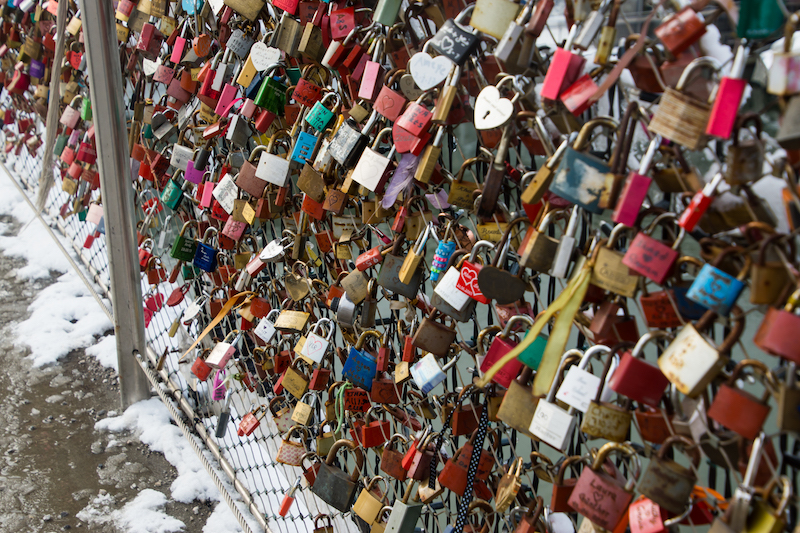 As I’m taking you along the streets of snowy Salzburg there are two special places I want to mention. The first is the oldest bakery in Salzburg dating back to the 12th century when it was part of a monastery. 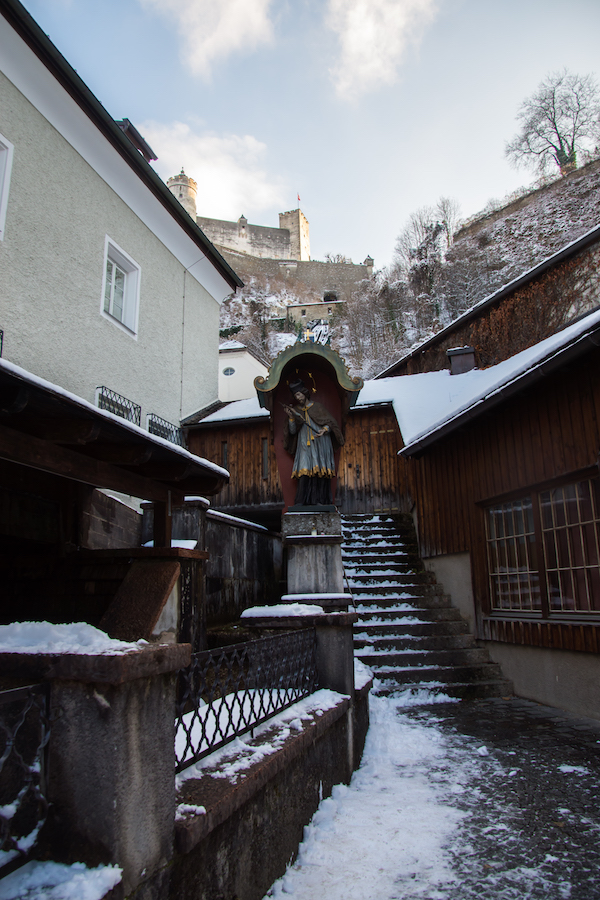 The “Stiftsbäckerei” prides itself on still using a wood-fired oven. They are famous for their sour dough bread which is known for staying fresh for a long time, which is why it is nicknamed traveler’s bread. I loved the taste. 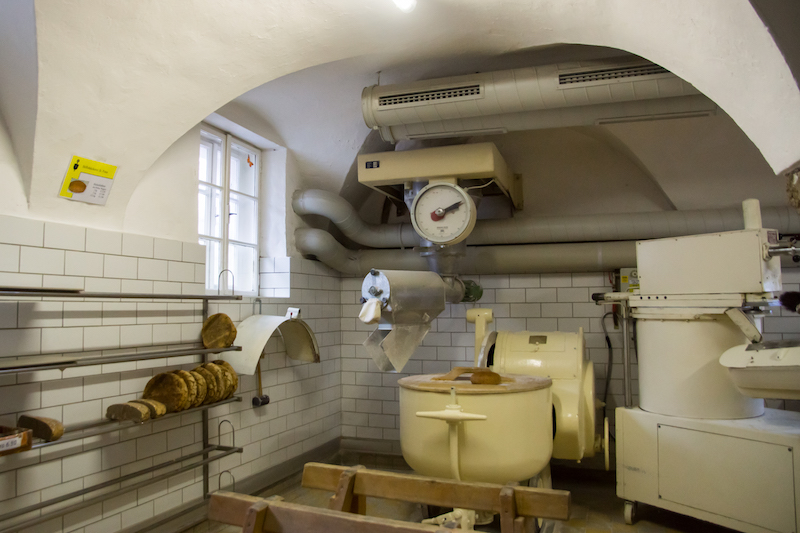 But the bakery is also famous for its brioches that come out every few hours and are delicious. There are usually queues to get them warm straight out of the oven. We gladly took the time and ended up by sharing 5 wonderful brioches, fresh from the oven, in just a few minutes. 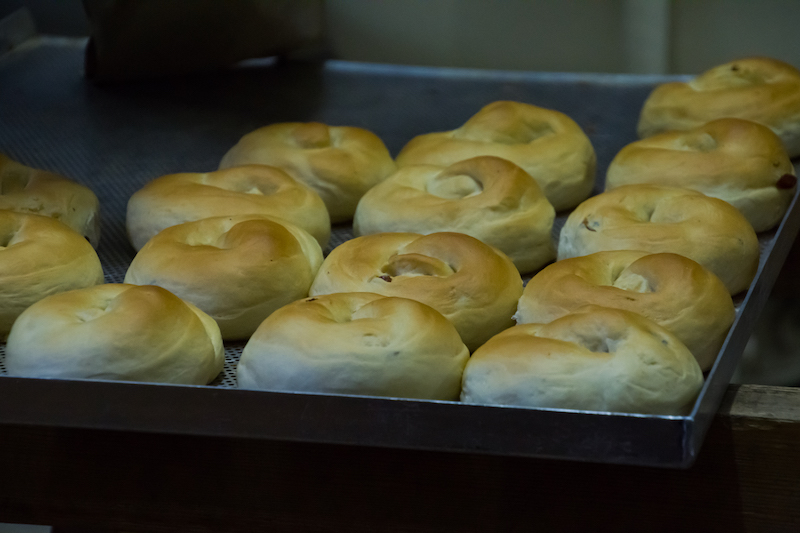 Outside you can also admire the old water mill. 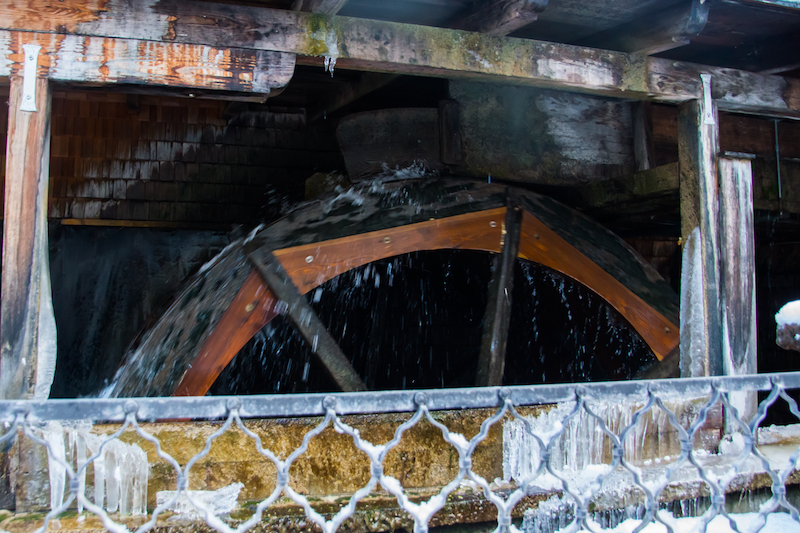 And just a few steps away is the Petersfriedhof cemetery, one of the oldest in Europe. Walking silently among centuries old graves, I couldn’t help thinking about those people who had come before and wonder what their world looked like. Was it easier or more complicated? The snow and peaceful atmosphere made it all even more beautiful. 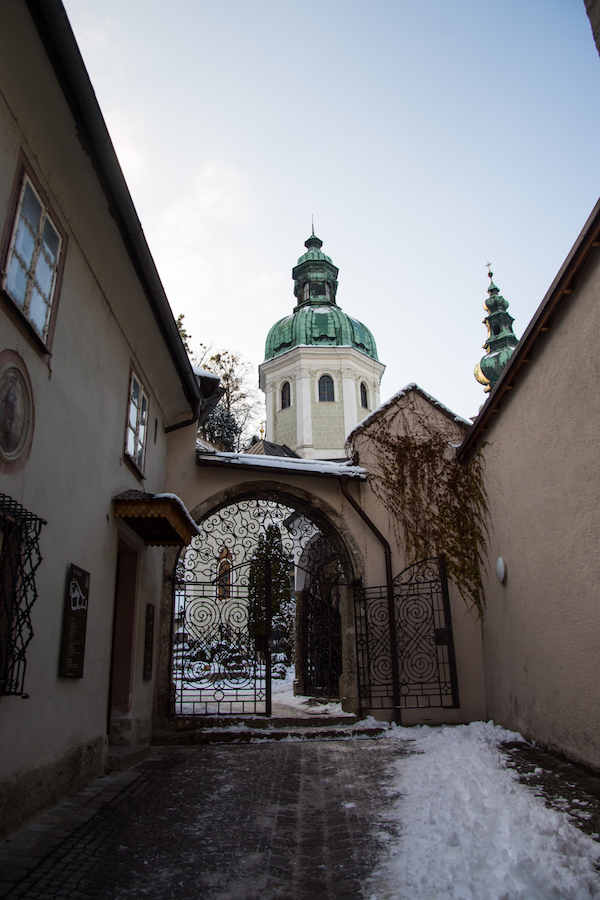 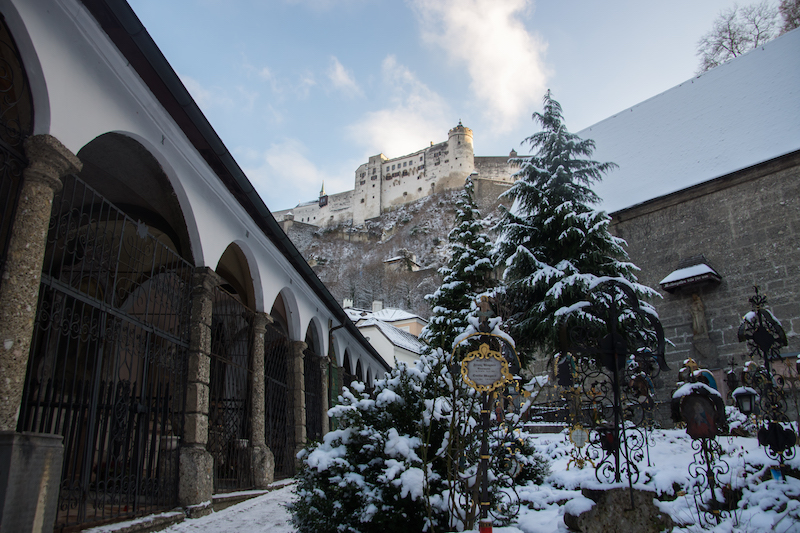 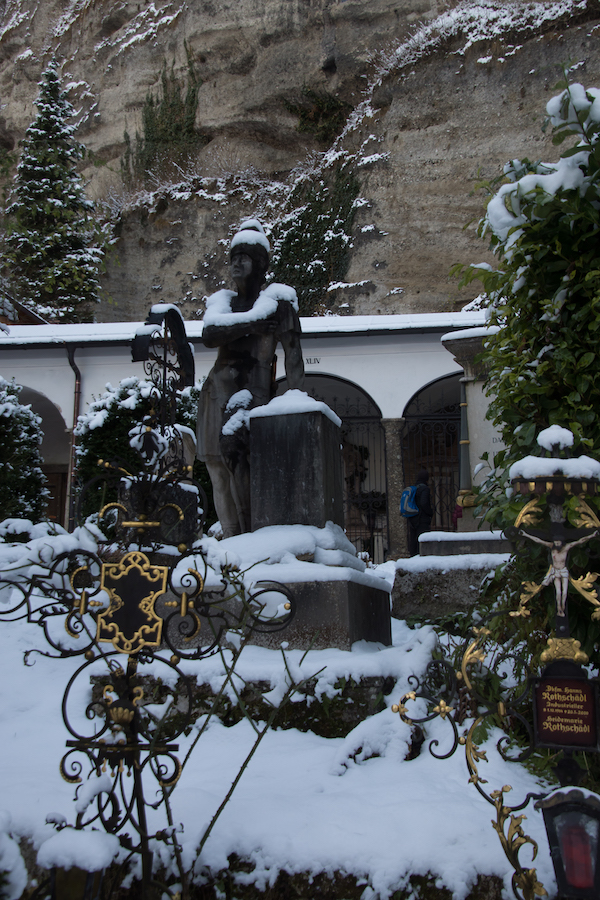 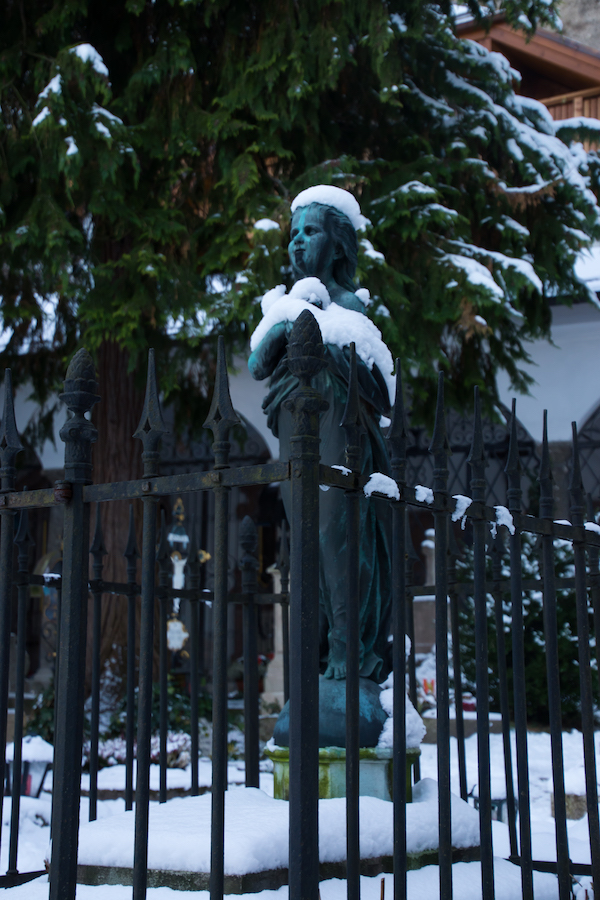 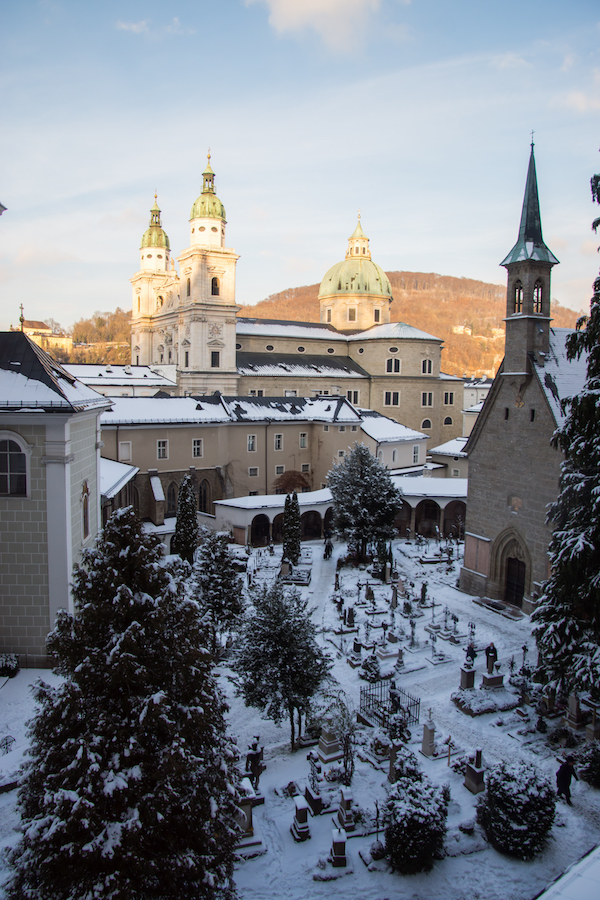 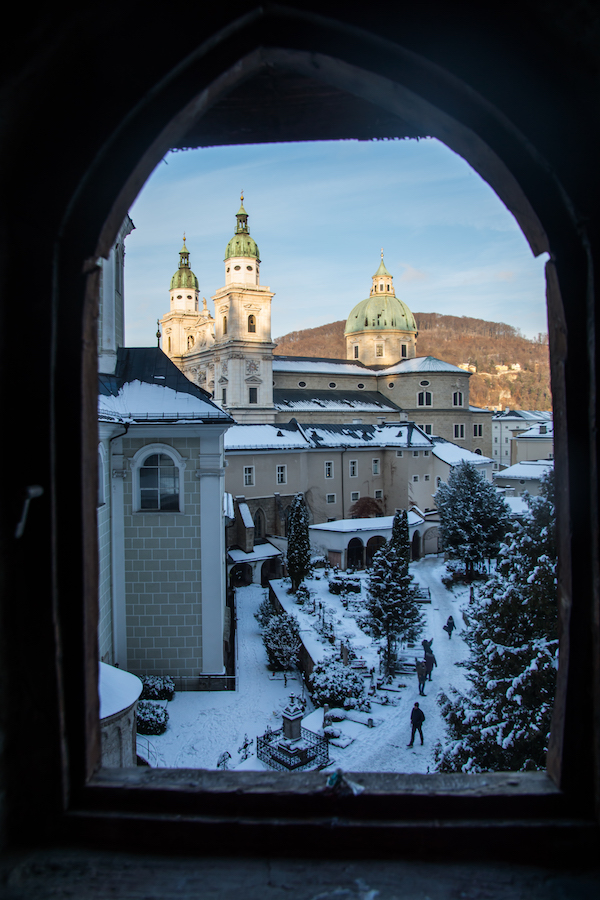 There was one more place I had to visit in Salzburg, a mandatory stop for a book lover like me, the oldest bookshop in Austria. The Höllrigl dates back to 1594 and besides a beautiful vaulted room and ceiling frescos, it has a wide variety of subjects. More importantly, it has a small but nice English books section. 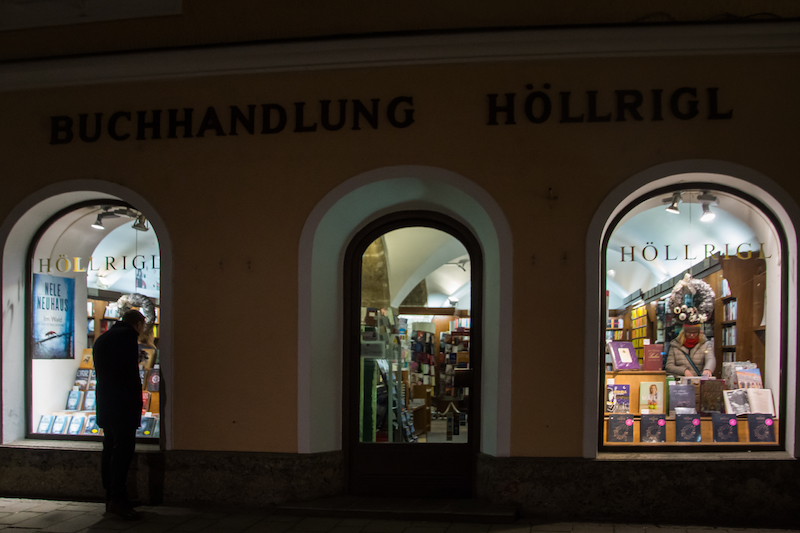 One of my New Year’s resolution was to start reading more again. Every time I move, there is a period of adjustment. From getting your house in order again to getting used to the new country. At the end of the day you feel tired and you end up watching lots of TV because you need a distraction and it is just there, at the press of a button. I wanted to change that, I love reading and books were always a part of my life. They are always good companions and can help you get through different stages of your life.

We are not living in an easy world right now. It is difficult to know where we are heading. The reality is nationalism is growing not only in Europe but also in the US. Conflicts and the massive movement of people has contributed to the feeling that it is time to close our doors, build high walls and keep “them” outside. Many want to restore our values, our culture, our traditions, defend them, getting back to being us. But it is too late. Us was always a mixture of many parts.

Just in my country, Portugal, we had the Lusitanians as the core, then the Romans came, the Visigoths and other tribes and finally the Arabs. They mingled and left traces behind in our blood. At the same time when you have massive population movements at once, you lose control, you not only fail to adequately help the people that really need it but you also cannot properly screen everyone. Nothing should have been rushed. That is why I do understand both sides of the argument.

And that is why books are so important. They open the world to us, they teach us about the other, they make us understand the different sides of an argument, of people, of nations. They also make us understand who we are and what makes us human.

Finally I am able to read again and it has been wonderful. I set out by wanting to read four books per month at least but I’m happy to report that just in January I managed to read 10. Here they are, I’m trying to be as diverse as the world we live in. 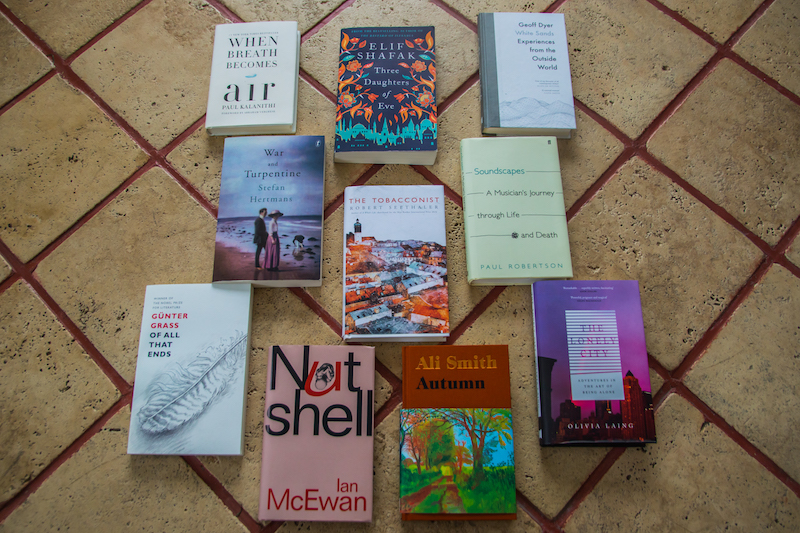 I really loved them all but if I could just recommend one and as I’m writing about Austria, “The Tobacconist ” by the Austrian author Robert Seethaler is a wonderful book and so appropriate at this moment in time. It goes back to the rise of National Socialism and the anticipation of Austria’s annexation by Germany in 1938. It’s moving, haunting, and sad. It shows how people’s lives can change in a very short time, how hatred and fear can change everything. But at the same time how resilient, supportive and kind people can be in hard times.

I leave you with the last pictures of the snow and its effect on wonderful Salzburg. There will be other snows, other cities and more books … 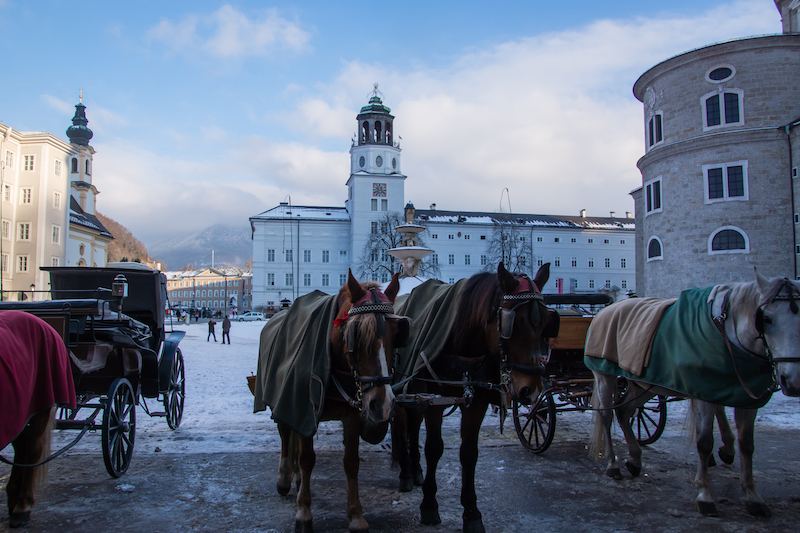 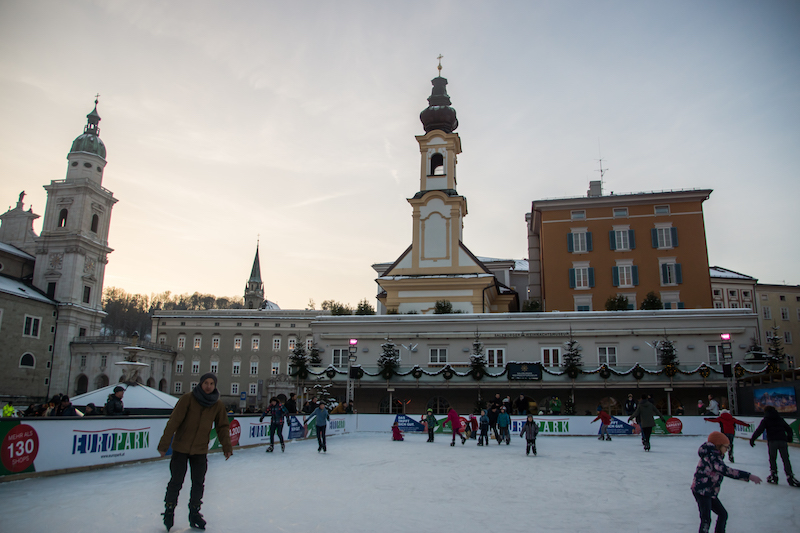 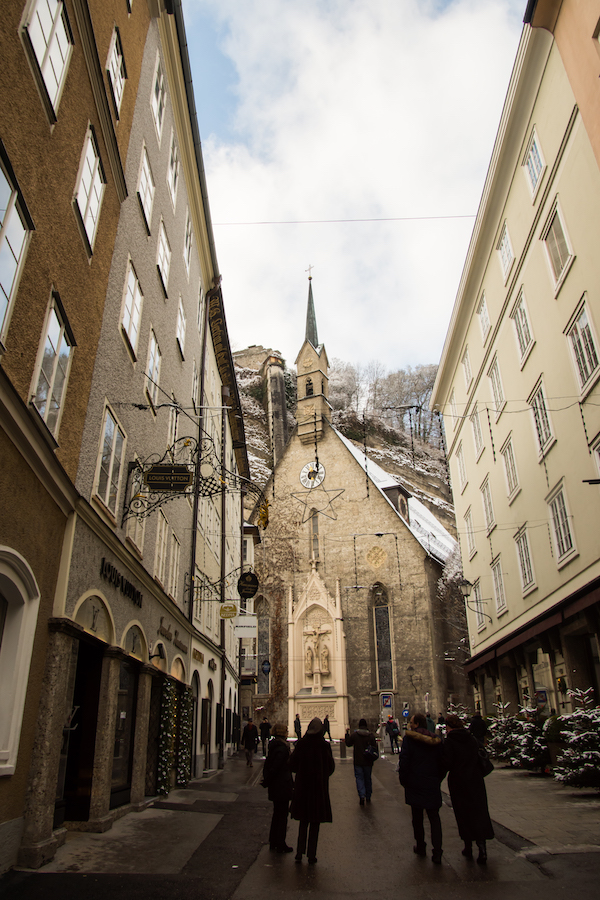