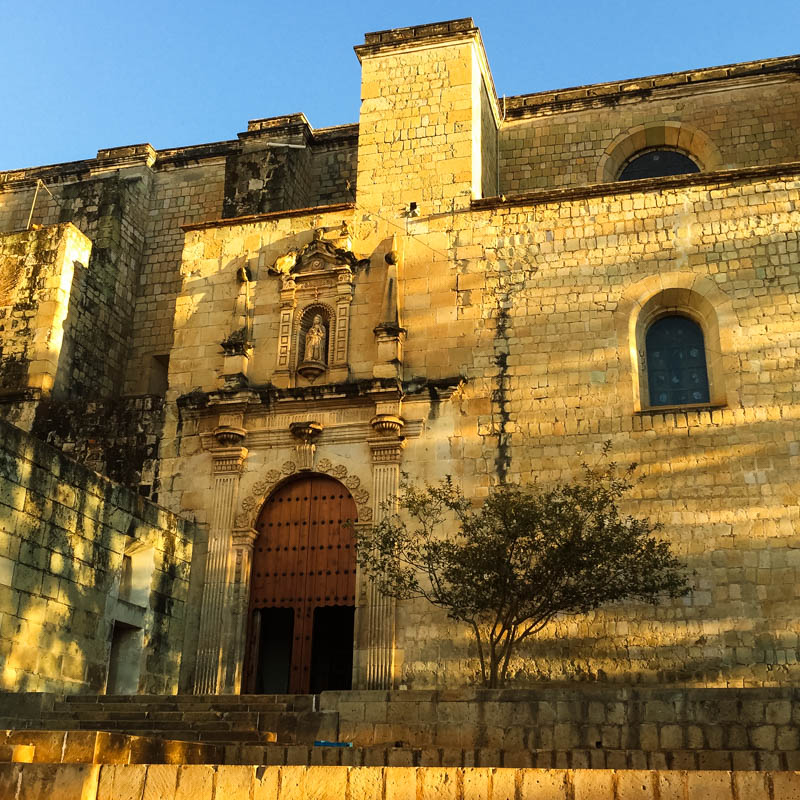 Revisiting the Heart of Mexico I

When the plane started its final descent, I felt excited and emotional. We were finally back! Almost two years had passed since we had bid our farewells to Mexico after what had been 5 very happy years.

My daughter had been born in Mexico and she was now back to celebrate her 6th birthday, how time flies! Mexico got into her heart from the beginning, it was here she learned to love life and her family. Mommy and Daddy came as a given but the Mexican family she found here was a gift, a very special gift that we and her in particular will be forever grateful for.

I’ve said it before, blood is not everything. Her heart quickly recognized the love and kindness of the owners of our house and identified them quickly as the first “grandparents”. The rest of the family followed.

Her excitement grew when the plane approached the runaway and she looked at “her” Mexico City. Mommy we are back, she cried.

We couldn’t leave the plane fast enough! And when the border policewoman welcomed us to Mexico, we really felt she was welcoming us home. Driving through the roads on our way back to what was once our street, it felt unreal at times. Were we really here? Was I really breaking the rule of never returning to a country I’ve lived in before?

As we approached the house, the thought of embracing Carmen again got me very emotional. I couldn’t avoid the tears when I saw my daughter jumping out of the car and finally embracing her “Nonna”, her Mexican grandmother. How many times during those 5 years had she stood there by the door to welcome us with her warm smile. Flashbacks of those memories came back. I approached the window of our bedroom and looked outside. Everything looked as I remembered. The beautiful garden and that view. 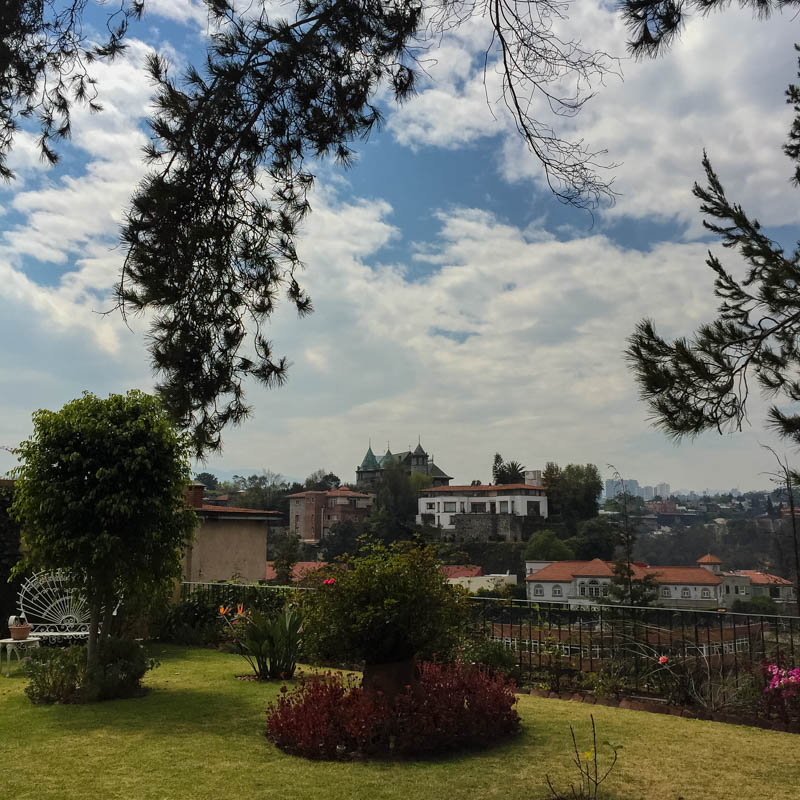 How many times had I sat on the other side of the wall, taken my morning coffee outside to greet a new day. That view had witnessed many happy but also some trying moments. That view had inspired me to write so many times. And there it was again!

But there was a piece missing, an important part of the soul of this house, our dear Luigi, Stephanie’s “nonno”. We had lost him last November and although he had lived a long, fulfilled, happy life, it was hard to accept he would no longer be here. The first thing my daughter did was to go everywhere in the house, to reassure herself it was really true, that her Nonno was really gone.

I felt like doing the same. Surely he would be waiting for us in the living room with his “cubita” (a coke with ice and rum) or in the TV room watching his Italian football club games or sitting in the garden, enjoying the sun and wondering what took us so long! And him asking me, if this was the day when I would be drinking a tequila. I would have given anything to see his welcoming smile and hear his teasing about my drinking.

But alas he was no more, at least physically speaking. However, his presence was everywhere. In his portraits, in the objects he loved so much but mostly in our hearts, particularly Carmen’s heart. A heart which was part of a magnificent duo and which is now being forced to be on its own. a heart which understandably finds it unfair and wants its other half back. In such a situation it is difficult to see all the family members and friends that love you and want your happiness. Carmen is an amazing person who can light up a room with her wit and sense of humor. And we need that, we truly do!

There was always a reason why I never went back to countries where I had lived before. Basically I did not want to know what happened the moment I left. I wanted to believe time froze the moment I boarded the plane. That like in the story of Sleeping Beauty, some evil fairy freezes time for a hundred years. Except in my story there would be no handsome Prince to break the spell. Time would never unfreeze in my memories since I would never go back. I always preferred to think that my imprint would forever linger in the house I lived for five years but even more in all the regions and pueblos I visited in my beautiful Mexico.

Family made me go back, true friends that made it impossible not to. So the time came to unfreeze time and what better way than going on a road trip and try and visit some of our favorite places in the short time we had. I must admit we were a bit limited in our choices by the pope’s visit to Mexico. It was moving to see the devotion and the Pope’s welcome by the Mexican people. However, this meant that we had to try to avoid places we would also have wanted to revisit if we wanted to avoid the masses of believer’s flocking to his services.

So we decided to head first to Oaxaca, a state in the southern part of Mexico, about 5 hours from Mexico City. Oaxaca was always a favorite, in terms of archaeological sites, culture, festivals and gastronomy. The state and the city of Oaxaca have a lot to offer and I’ve written extensively about my experiences in the past. So could it still charm us with its colonial buildings, its museums, the food and its wonderful markets? I was curious to find out.

If you never made a road trip in Mexico, you must! The scenery is always worthwhile and it put me in the mood for what was to come. From the impressive sky, the volcanoes, the vegetation, it is impossible to be indifferent. 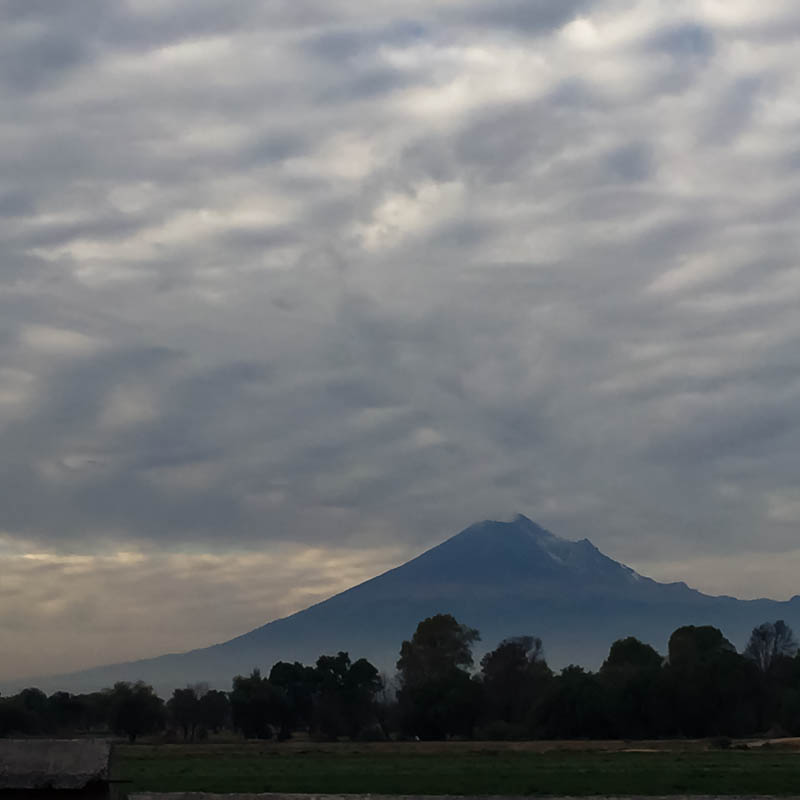 We left Mexico City on a cold, cloudy morning. Temperatures were freezing as Mexico was under yet another cold front. Every year there are more than 50 cold fronts in Mexico. I remembered them well from when we were living there. I let others drive and just sat back and enjoyed the drive. I felt grateful I was able to come back. There it was, the Mexico I learned to appreciate and love. 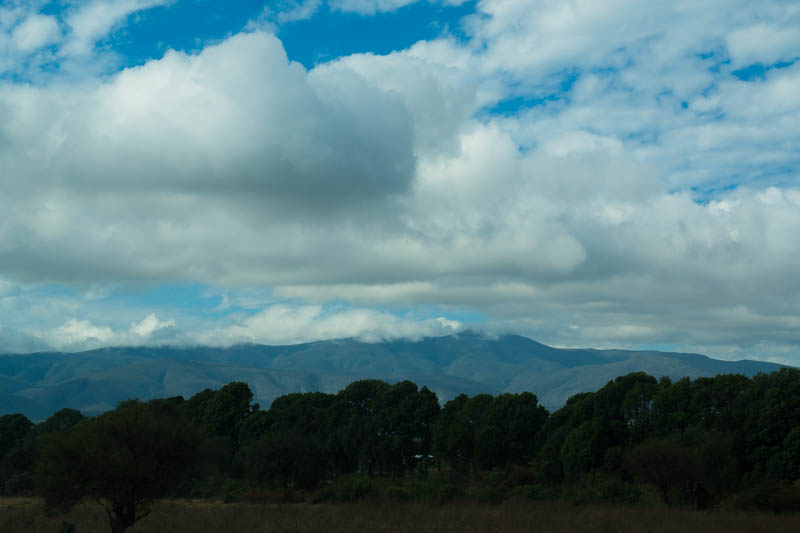 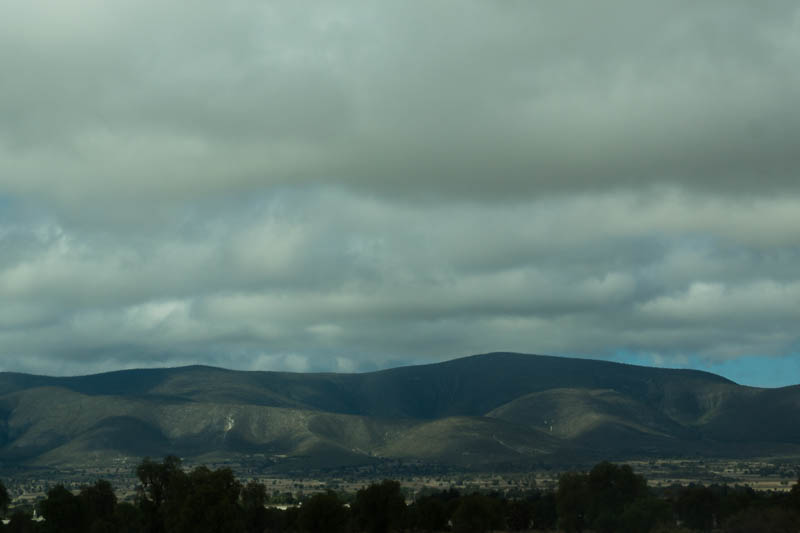 I was hoping Oaxaca would be warmer and I was not disappointed. It had been a while since my last visit but I could still recognize the colorful streets and squares. 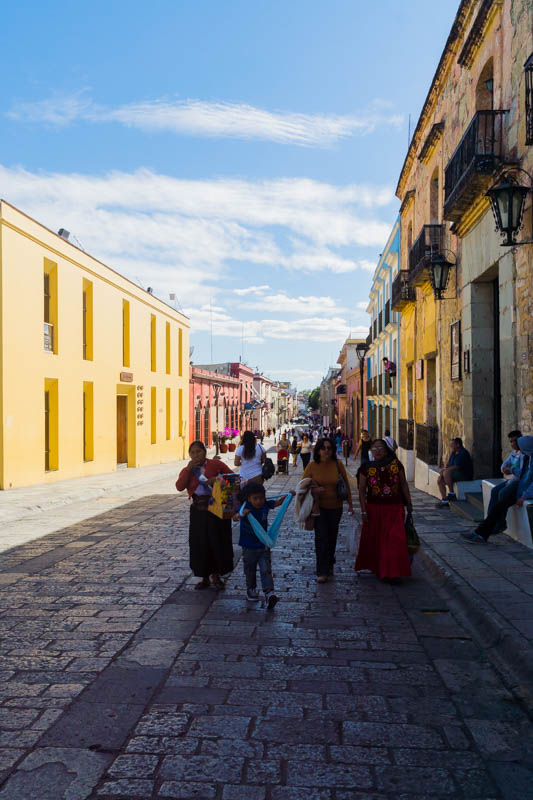 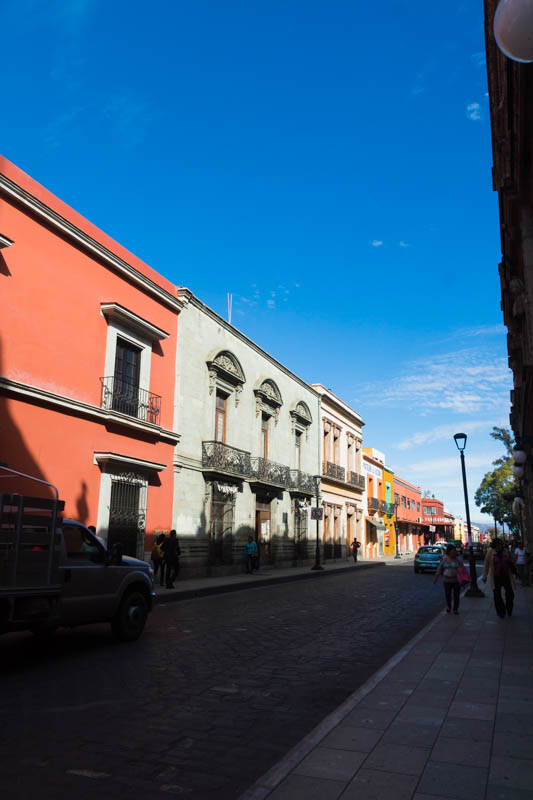 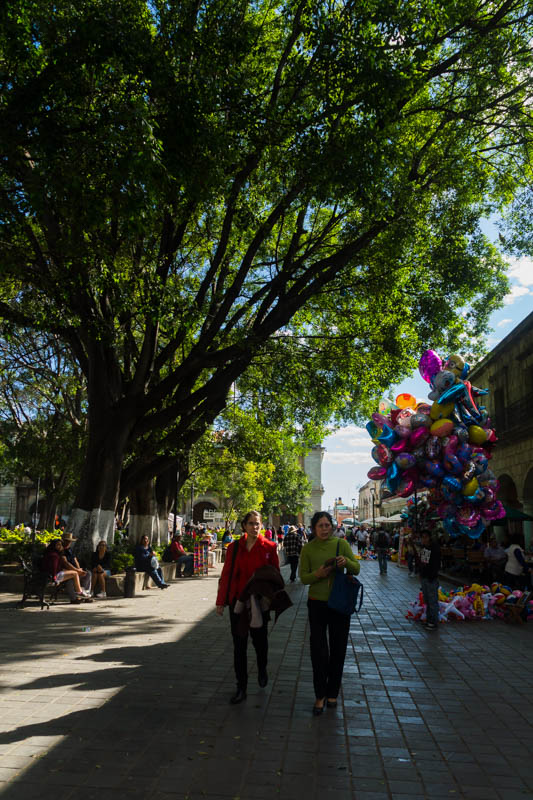 We arrived around lunchtime and we were very hungry, so we decided to try the restaurant “Casa Oaxaca” which had been recommended to us. We sat in the sunny terrace longing for those flavors we had loved so much. When we were asked what kind of salsa we would want to accompany our appetizers, I sighed. Ah yes those wonderfully fresh salsas with just the right amount of spiciness! How I missed that. The salsa verde we chose was prepared fresh before our eyes. It is difficult to explain the wonderful smell that greeted our senses. That freshness once the ingredients start to be mixed is everything.

And once the tomatoes, chilies, fresh cilantro and the other ingredients are mixed, you can finally dig in. 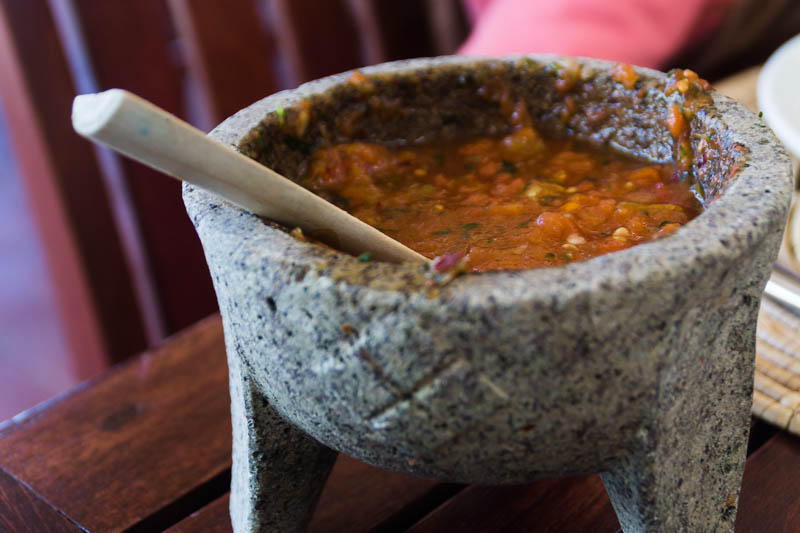 I was afraid that my stomach, after two years of virtually no spice, would somehow resent it, but I was wrong. It was like it had kept the memory of thousands of spicy meals in the favorites file and now it could finally get back to it happily.

Oaxaca is known for the “Tlayudas” which are big baked or grilled tortillas (flat bread) which can take different toppings so of course we had to start with those. We chose a meat, salad and cheese tlayuda to begin our meal. 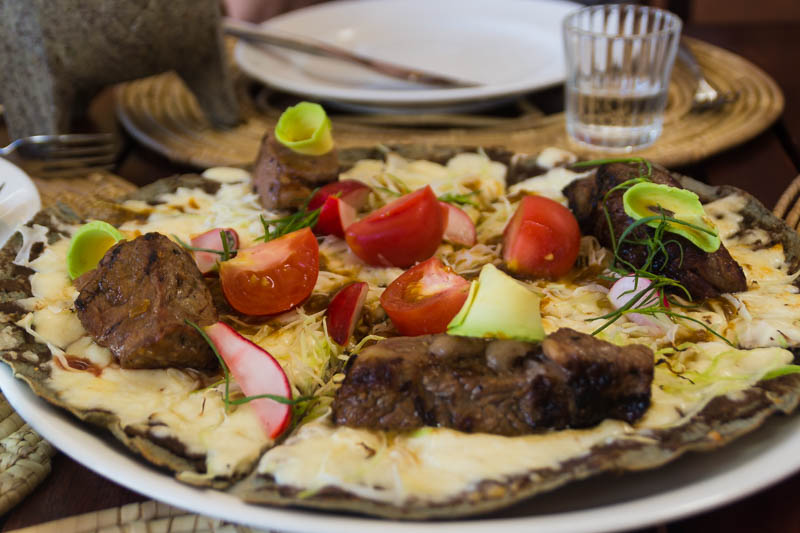 What followed brought back the flavors of Mexico to us. Rabbit, lamb and beef with different types of moles (sauces) filled our empty stomachs and provided comfort and gastronomic bliss. 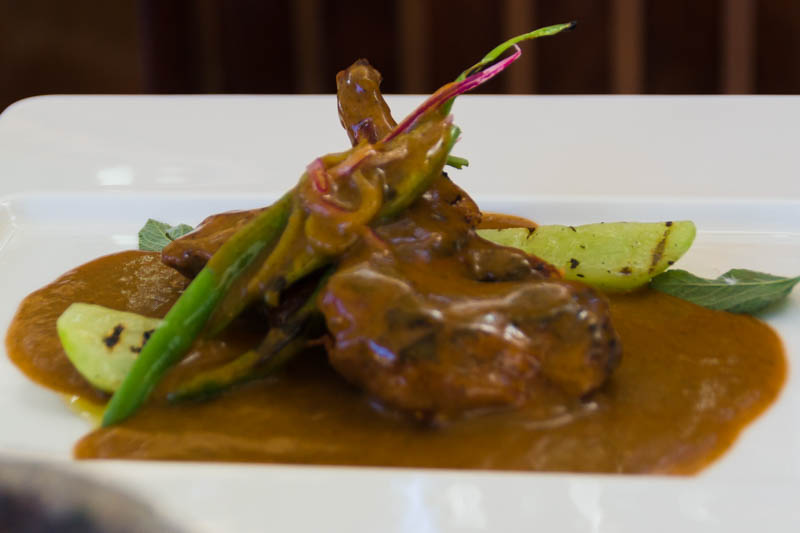 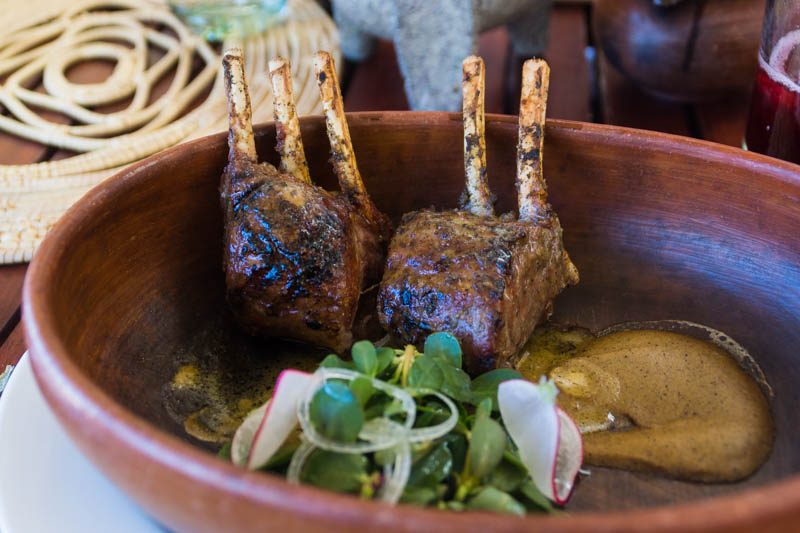 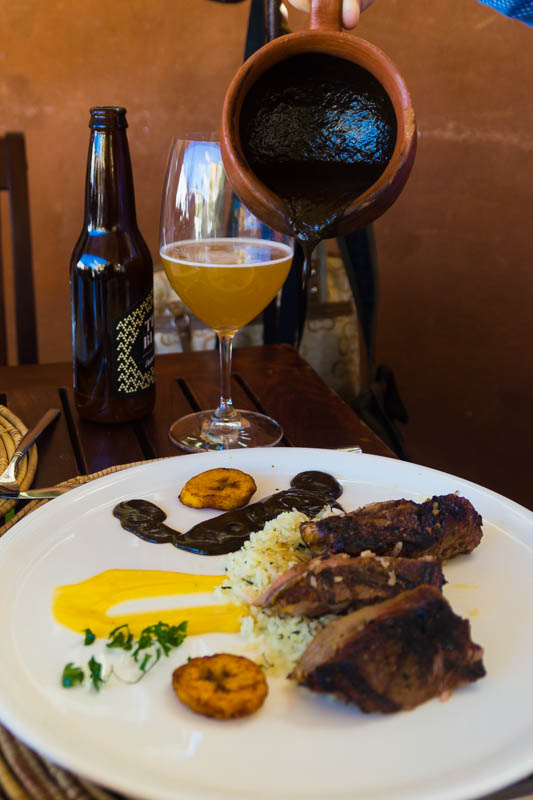 And what could be nicer than finishing it off with a delicious Mexican chocolate dessert and ice cream? 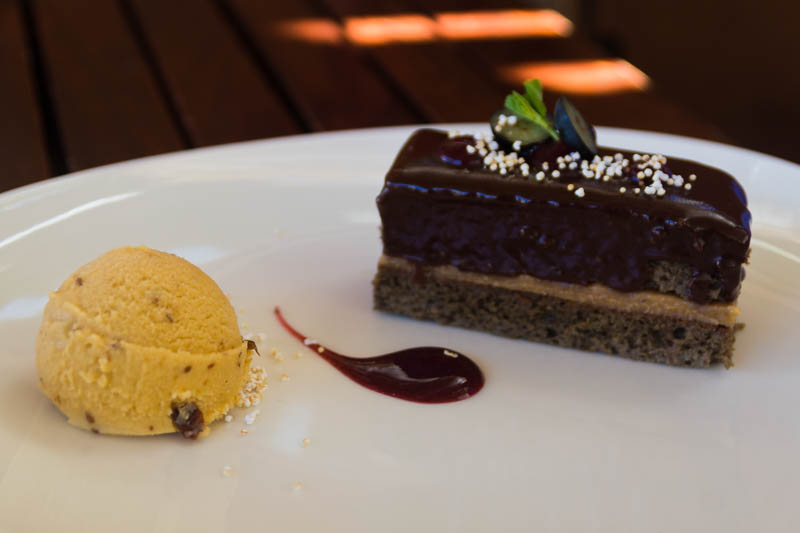 For the rest of the afternoon we just strolled the streets of Oaxaca, I was still finding it very hard to believe I was once more enjoying the sun and the colors of Mexico. 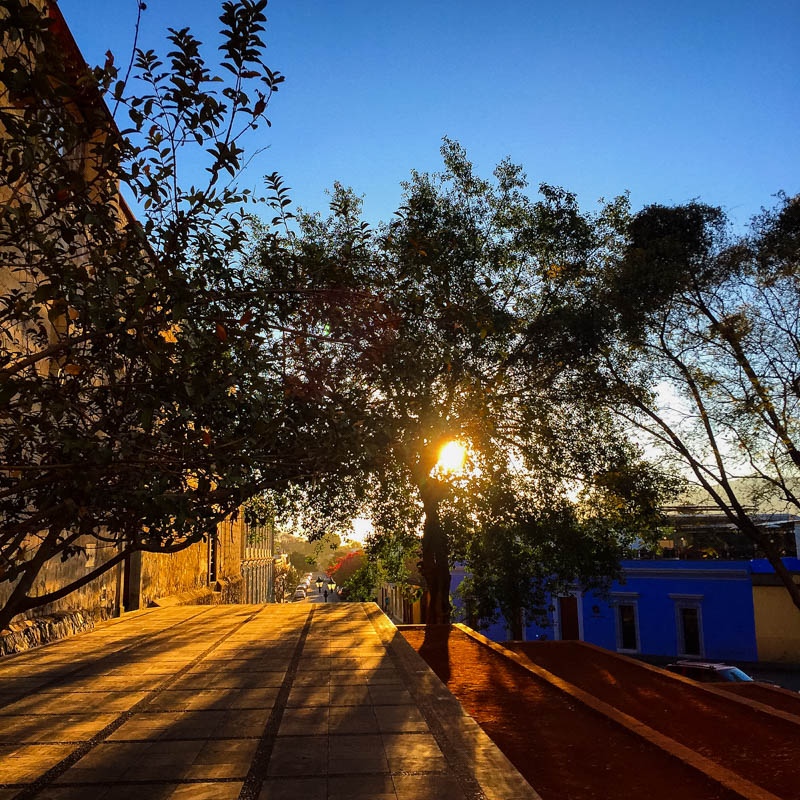 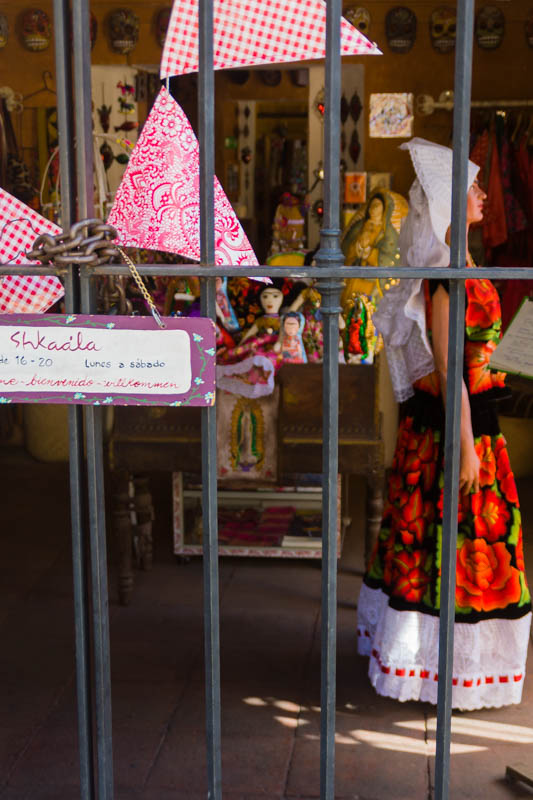 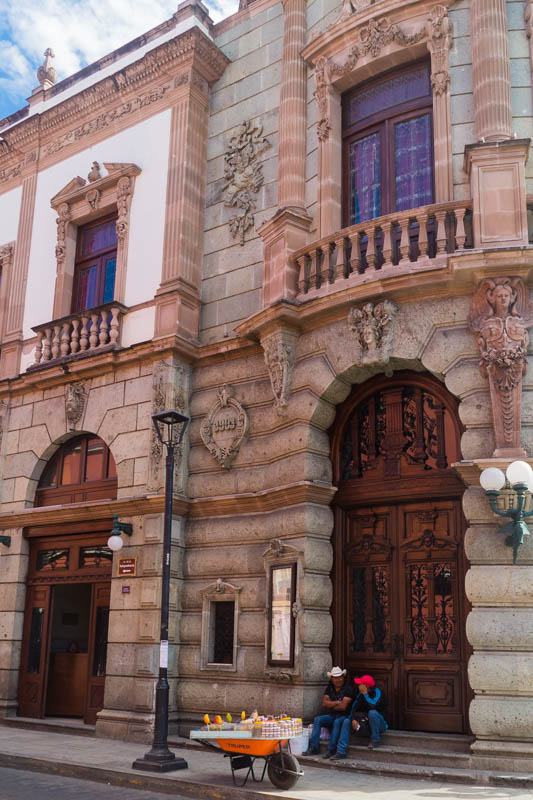 When we finally got back to the main square where the typical shoeshiners were getting busy, we heard the nice sound of the marimba players. 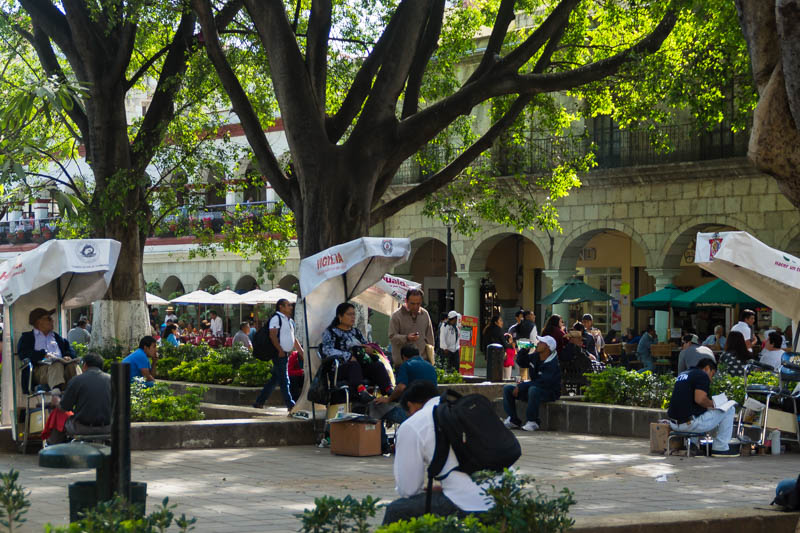 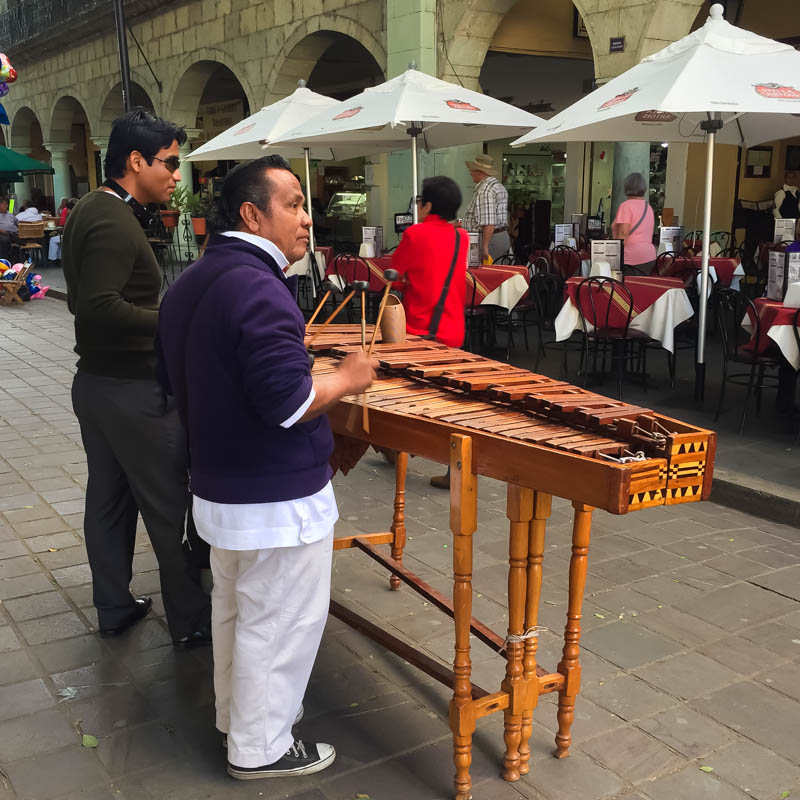 When you live in a country for some years not only the flavors but the sounds become part of your memories. Music warms your soul but so does the language. Many people don’t know how different the Spanish from Mexico sounds from the Spanish from Spain. The Spanish from Mexico is like a sweet song that warms your heart. There are many endearing expressions in Mexico, particularly towards children. And for the first 4 years of her life, my daughter was lucky enough to grow up feeling that warmth and love. I look around the square, take all in and feel the emotion growing once more, Mexico does that to you.

We still had time to pass at the local market and buy “chapulines”, small insects that are considered a delicacy in Oaxaca and often used in quesadillas and other dishes. They have a nice salty taste. Carmen wanted to take some back to Mexico. 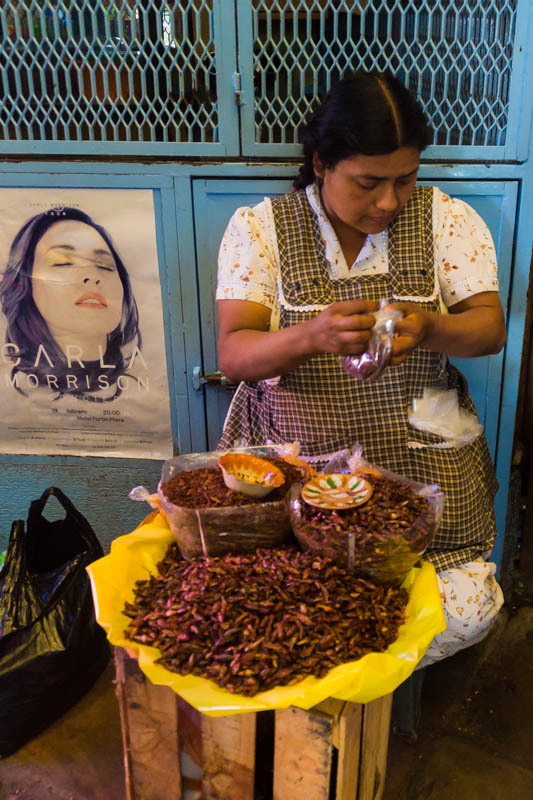 The market got me excited for what I knew was coming the next day, a visit to the “Tiangus”(=market) of Zaachila with a few stops along the way…