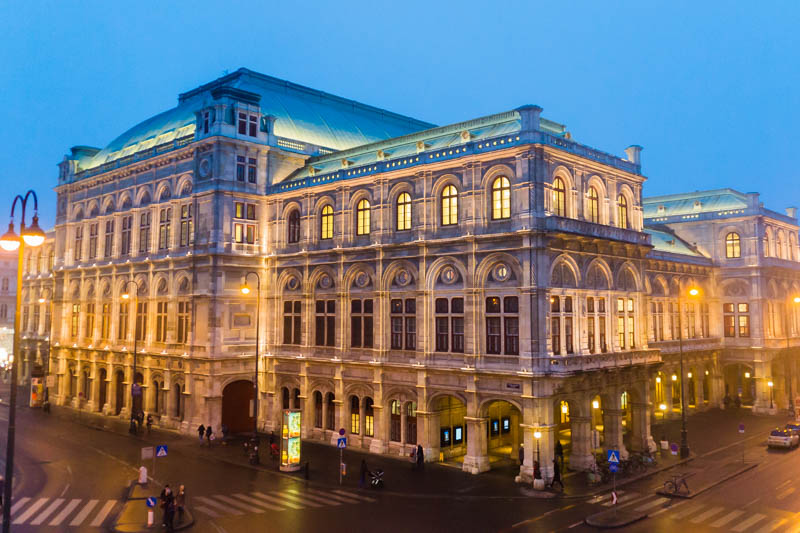 Vienna Opera House: A Tale of Death and Rebirth

Little did I know when I entered the Vienna Opera House for a long due tour, that I would find both a sad tale of failed dreams and death but also the symbolized rebirth of a nation. 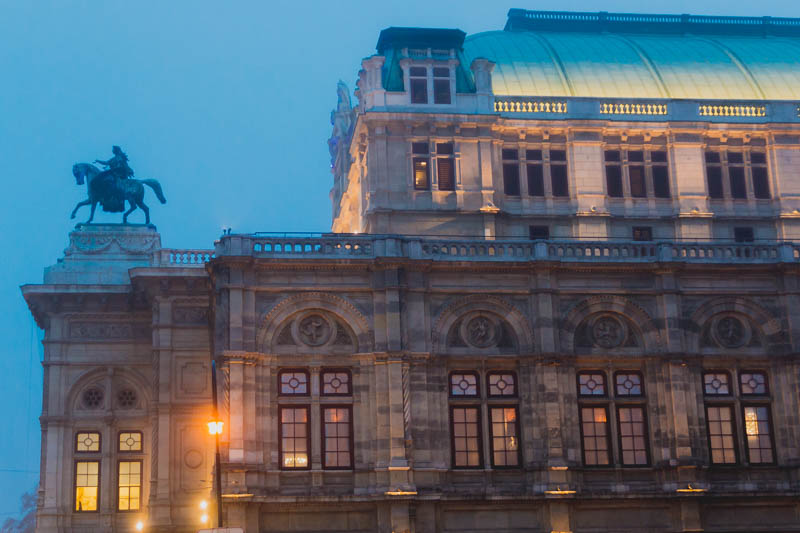 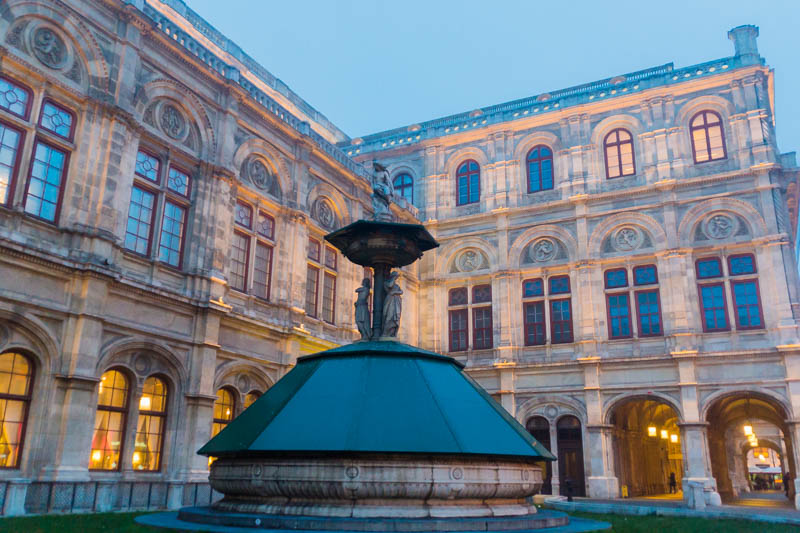 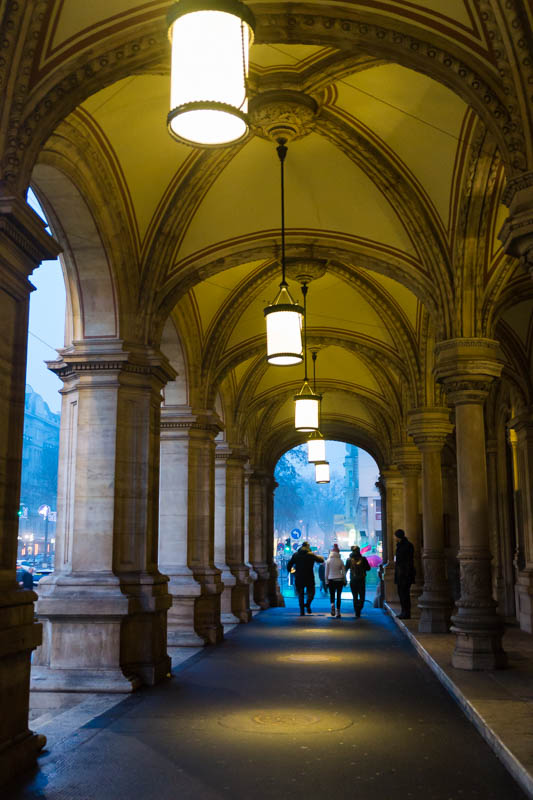 It all started with the vision of two Viennese architects August Sicard von Sicardsburg and Eduard van der Nül.

As young architects they had made extensive study field trips in Western Europe to further their knowledge. Later this knowledge was applied in their long partnership on several architectural projects in Vienna. But their winning project in 1860 to build what would be the first public building in the Ringstrasse, the Vienna Opera House, sealed their fate in unimaginable ways.

Public expectations were high from the beginning. The project in the early Renaissance style took 8 years to complete, from 1861 to 1869. Sicardsburg was responsible for the execution and technical side of the project, while van der Nül took charge of the decoration and aesthetics. When you stand in the original main lobby and central staircase,  and look around you, it is hard to imagine anybody could criticize such beauty. 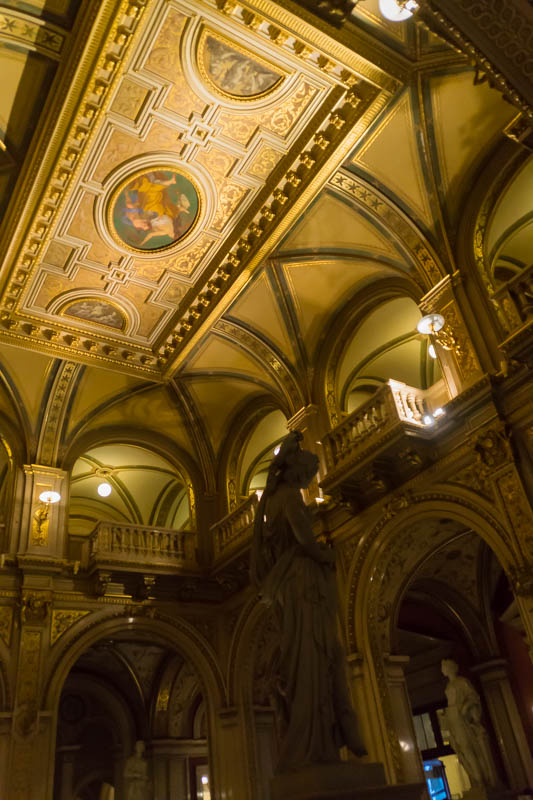 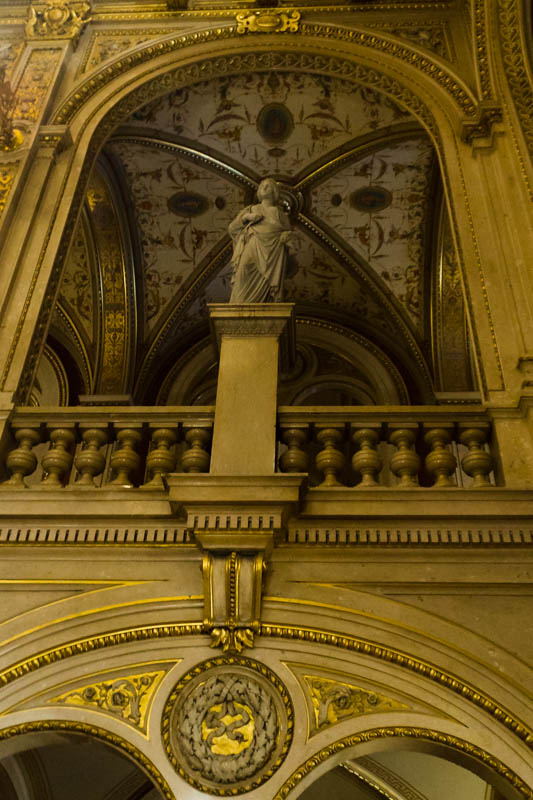 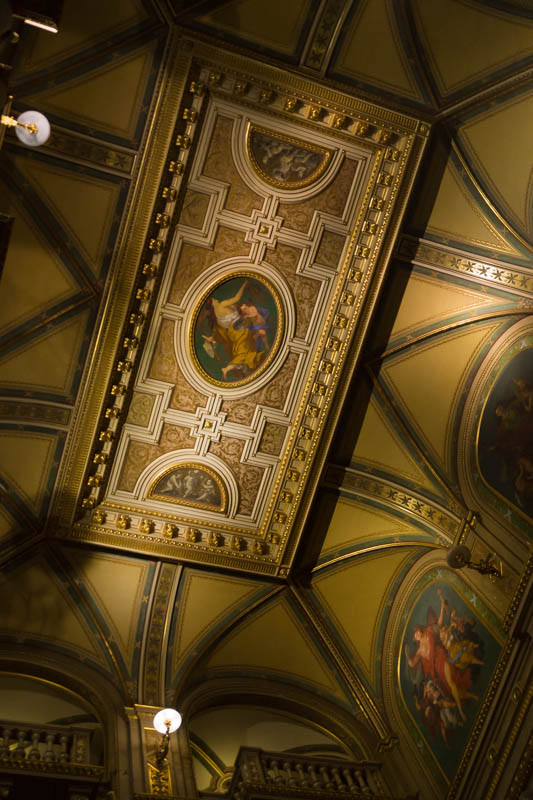 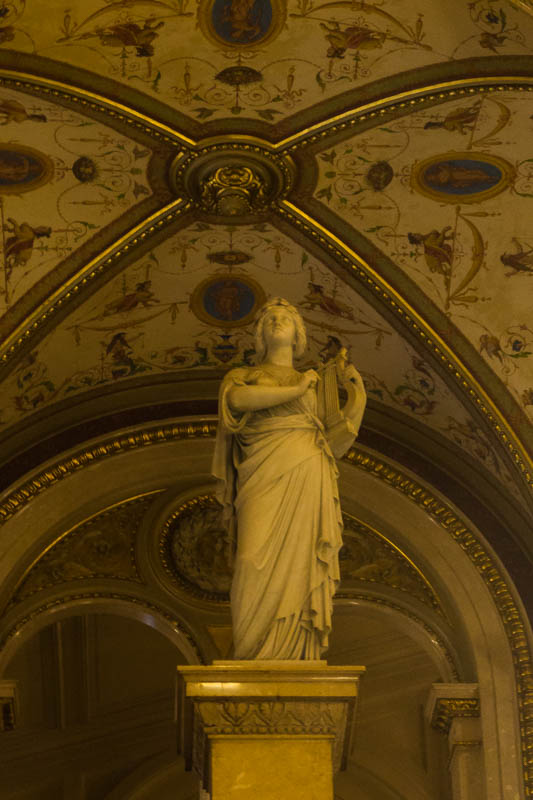 Unfortunately, for both men, criticism was widespread. From the media, to the public and even the Emperor himself. The hostile reaction to every decision and in particular to the aesthetics taste of van der Nül was relentless. He was accused of mixing styles and of having poor taste.

Pressure was constant and became unbearable. The building lacked the grandiosity expected. At some point the new Opera House was even compared to the battle of Königrätz, the military disaster of 1866 that saw the Austrian Empire defeated by the Kingdom of Prussia.

Van der Nül was the first to break under the pressure. In April 1868 he committed suicide by hanging. His wife was 8 months pregnant but not even that had prevented him from committing this tragic act. The shock was widespread, even the Emperor Franz Joseph is said to have been affected. From then on when the Emperor was asked about any art or cultural related events, he would always answer in the positive, stating his approval.

Nobody felt more his death than his partner, Sicardsburg. Ten weeks later he too would succumb to all these unfortunate events and die of a heart attack.

The Vienna Opera House was solemnly inaugurated on May 25, 1869 in the presence of Emperor Franz Joseph and Empress Elizabeth. Sad that both architects didn’t live to see it and the first performance, Mozart’s opera Don Juan.

But they are present. Two posthumous medallions representing and honoring August Sicard von Sicardsburg and Eduard van der Nül, can be seen under the two paintings that represent Ballet ( bellow and next picture on the left side) 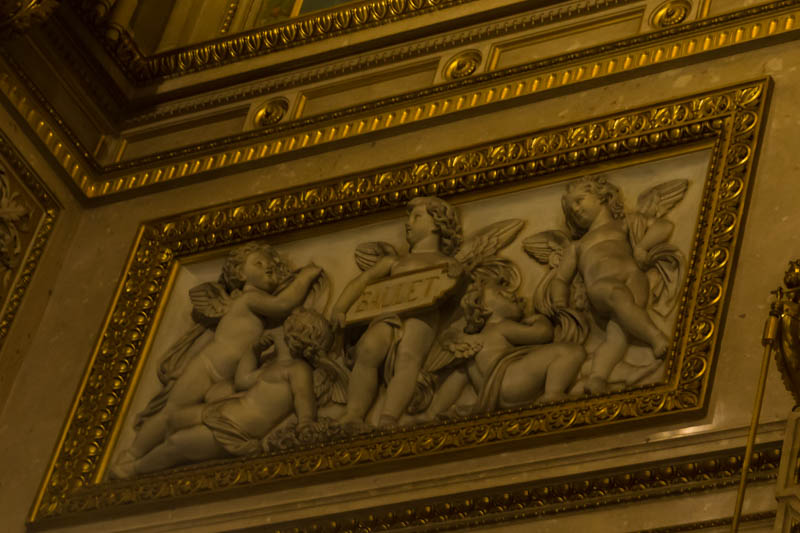 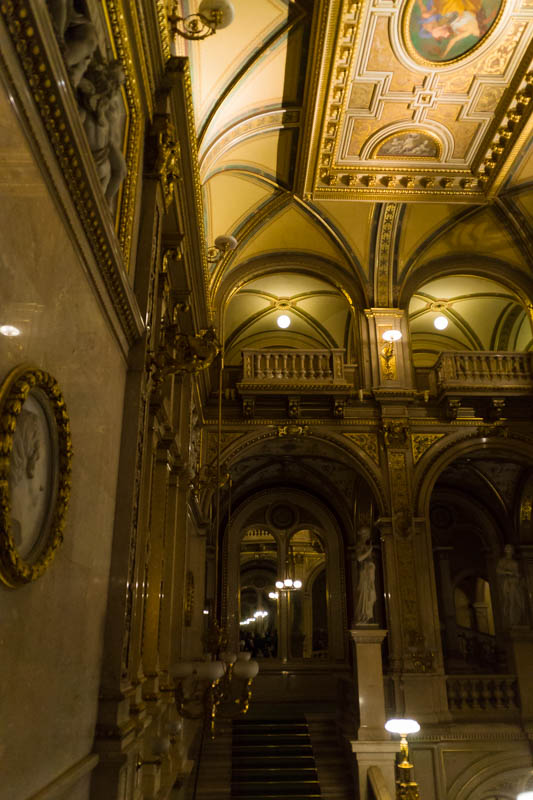 And the Opera (above the stairs, on the left of the picture). 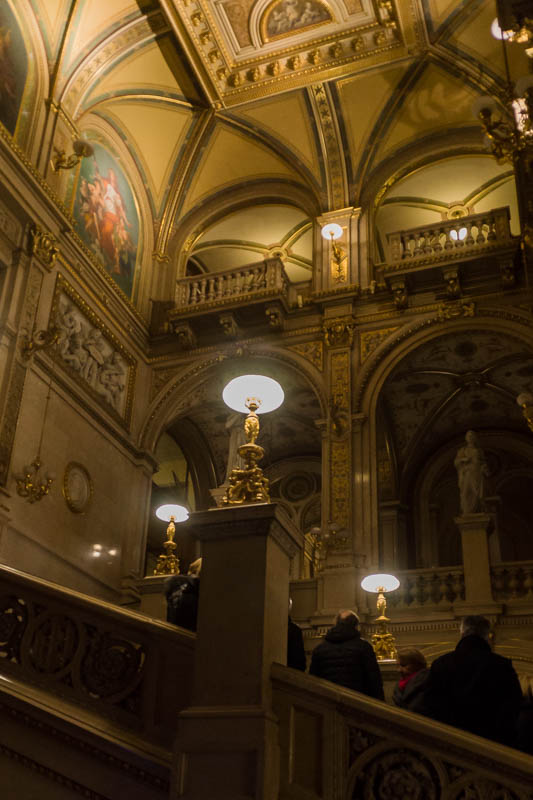 More important is of course the part of their legacy that resisted time and the bombardments of WWII. Besides the entrance and the central staircase there is also the beautiful Tea Salon where the Emperor Franz Joseph and his guests enjoyed tea time. It is a beautiful room with the ceiling and walls decorated with 22 carat gold leaves. 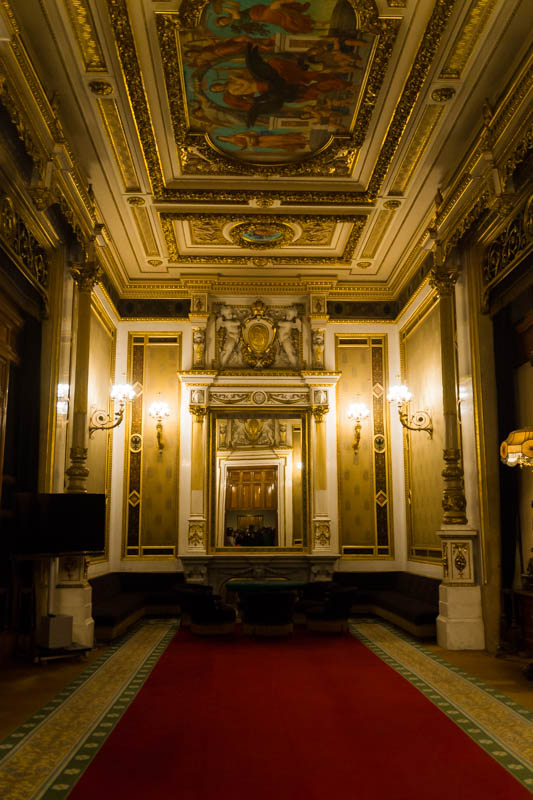 Nowadays this is a room used by the Austrian Chancellor to receive foreign dignitaries. But the room can also be rented for private use. For about 20 minutes, tea excluded, you pay around 500 euros!

And the last remnant of the legacy of August Sicard von Sicardsburg and Eduard van der Nül’s work is what was known as the Promenade room and is now the Schwind foyer. The room is used by the audience of the Opera at intermission. All around you can see paintings that represent famous Operas that are seldom performed today and the busts of their composers. 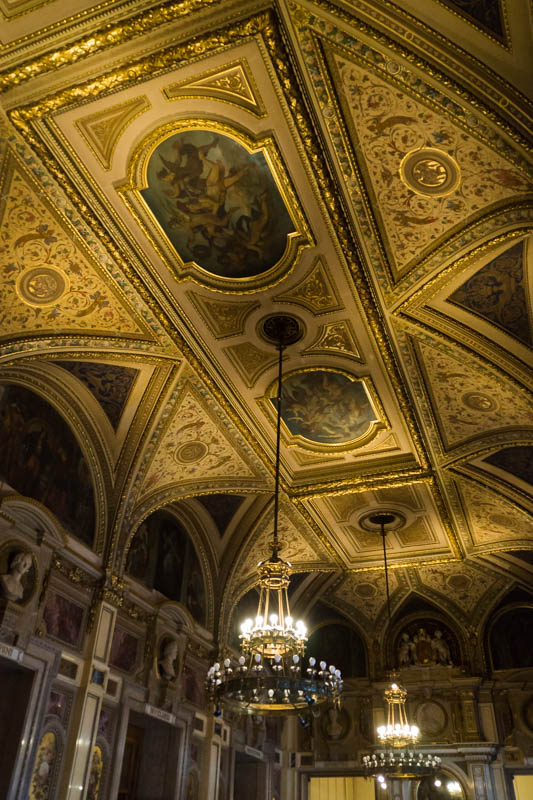 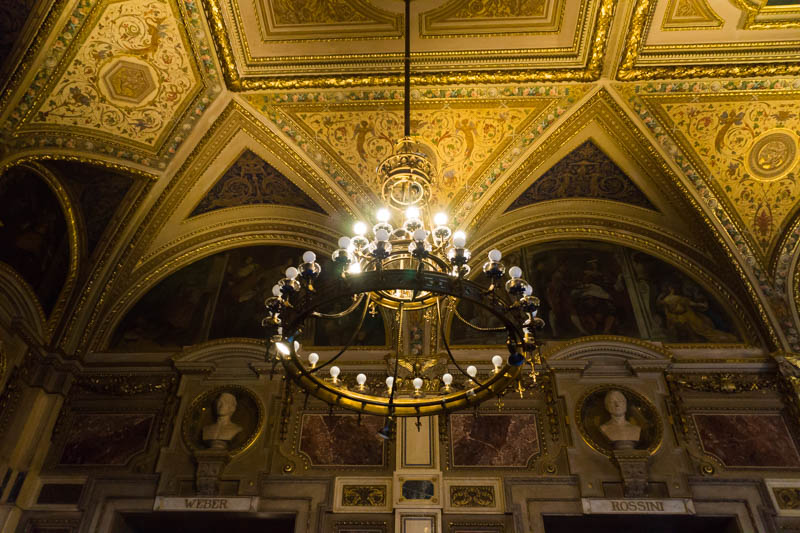 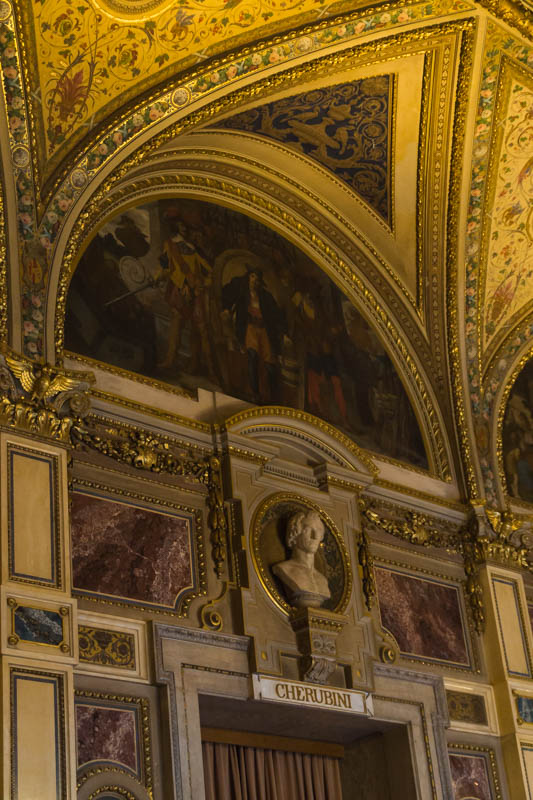 The Vienna Opera house has since had many directors but none quite like Gustav Mahler. It was under his direction from 1897 to 1907, that careful attention was put into changing the performance structure in terms of timing and accuracy. Care was also put in educating the audience and guiding their behavior during performances. Collaboration with other artists contributed as well to the revamp of stage aesthetics. Appropriately in his honor, the Tapestry Hall which had been the directors office until 1944, has been renamed the Gustav Mahler Hall. 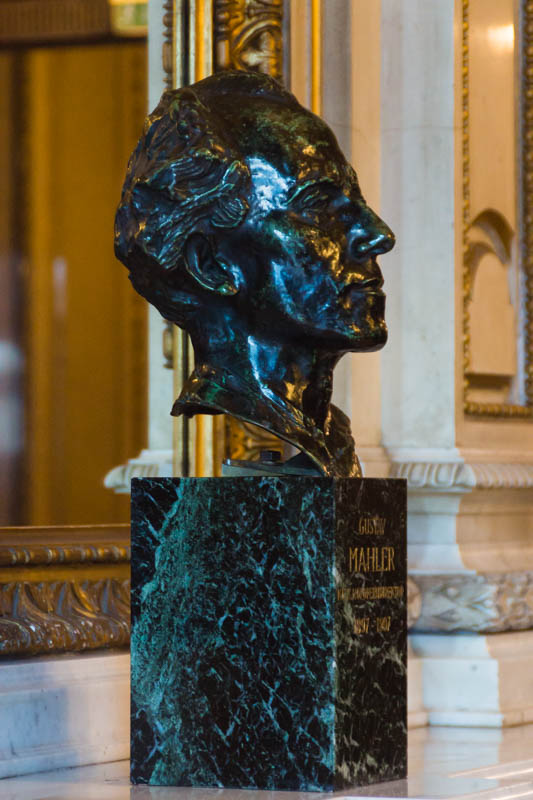 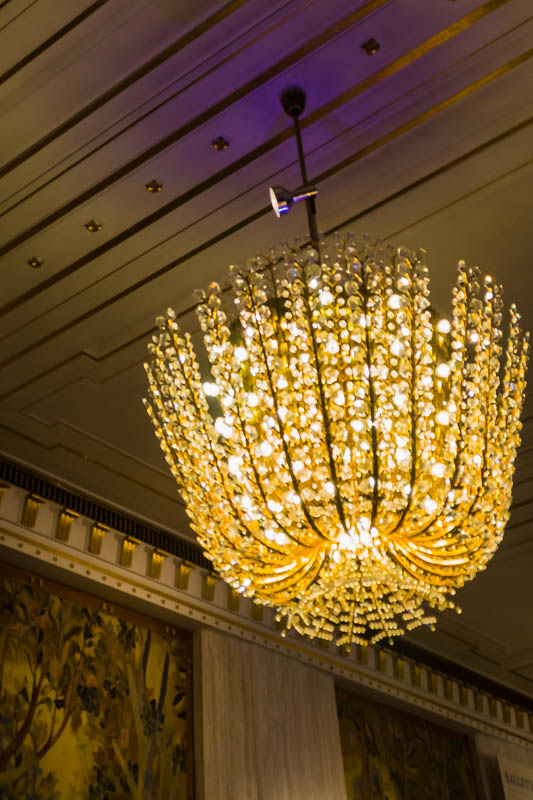 I’m glad there are still remnants of the original building in the rooms I’ve described before and also honors given to the architects and their vision. Their premature death was not in vain and what came after through other visionaries has contributed to the glorious artistic past of the Vienna Opera House.

But there was a dark period in between, when Germany annexed Austria on March 1938 and the Nazis took over the direction of the Opera. Until March 1945 there were terrible persecutions in the Opera. Many members of the Opera House were forced to leave, others were killed. Some works could also no longer be performed being banned from the repertoire.

And in March 1945 the Opera House was partly destroyed by allied bombing. WWII came to an end in May and Austria was then divided in 4 zones under the control of the Allied Forces. Americans, British, French and Russians controlled the 4 areas independently. The only district jointly governed was the central district of Vienna. That May, the Austrian State secretary for Public Works announced that reconstruction of the Vienna Opera House would start at once. It is hard for a country to reconstruct after a war. It is harder when you find yourself on the wrong side of it and are forced to do it while your country is controlled by the victors. Between reconstructing housing, healthcare, food supplies and government infrastructure there is another important factor. It is Culture.

Austria regained independence after pledging permanent neutrality in May 1955. But the last occupying troops only left in October that year. What could be more meaningful than inaugurating the Vienna Opera House in November? Fidelio, the only opera ever composed by Beethoven that had premiered in Vienna in 1805, opened to great acclaim.

The choice of this opera had a special meaning. Fidelio tells the story of Lenore, who disguises herself as a male prison guard to rescue her husband imprisoned for political reasons. The allusion to his tyrant captor and then her husband’s ultimate rescue and freedom, makes us understand why it was chosen as a first performance not only in Austria but also in Germany.  The Austrian tv broadcasted the opening ceremonies and this was the sign to the world of the rebirth of Austria as a nation after regaining independence.

The horseshoe shaped new auditorium was modern and had improved technology. The acoustics are so perfect that the performers don’t need microphones. When I visited, they were changing the stage floor for the evening ballet. Wood is used to protect the dancers feet. Everyday at noon, there is a rehearsal and after that the stage needs to be changed for the evening performance. An opera requires revolving stages so that the scenery changes between acts. This is done by manual physical strength. The Opera house crews work by shifts as there is a lot to prepare each day. 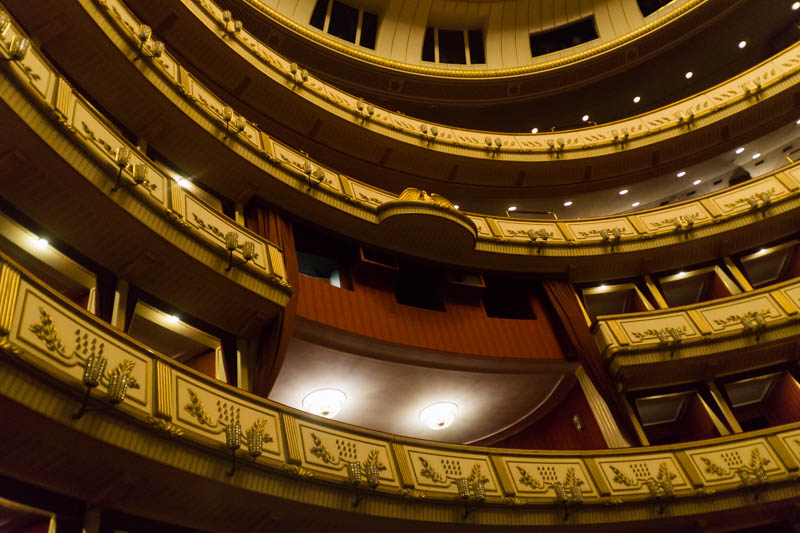 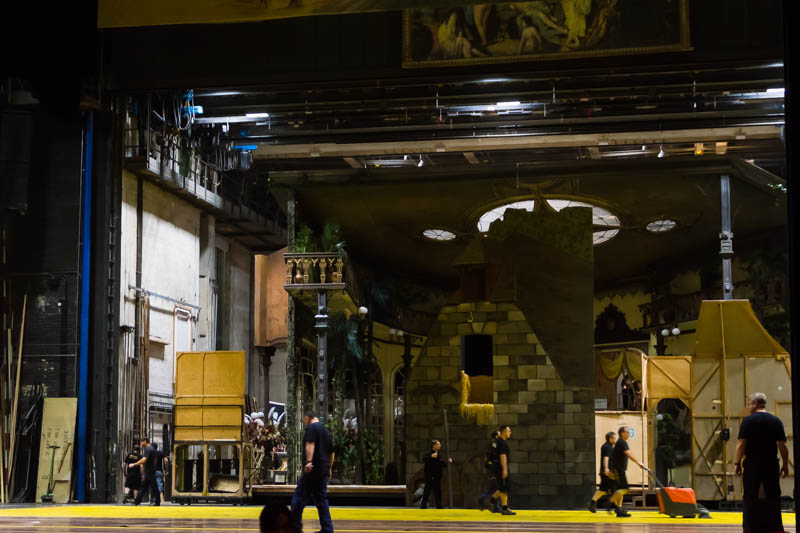 The impressive chandelier made of Crystal glass weighs about 3000 kg and requires 1.100 bulbs. 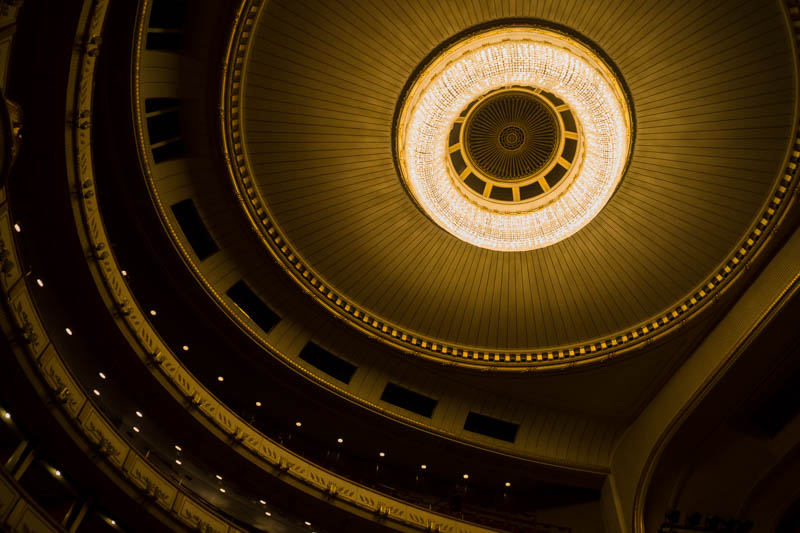 The Vienna Opera House not only has the biggest repertoire in the world but is also like a small city inside. There are two underground floors and 5 upper floors with offices, administrative rooms, dressing rooms, in short everything needed to run an Opera House of this importance. At any point there could be 1000 people working inside the Vienna Opera House.

I will for sure remember that when I attend the next performance. But what will remain with me is the people that made this beautiful Opera House what it is today. Beginning with the two architects and their unfortunate end but also those who followed, in particular those who showed the world that after darkness there can be light and rebirth!

I hope you can visit the Vienna Opera House soon either for a tour or a performance. You will find all the details here.