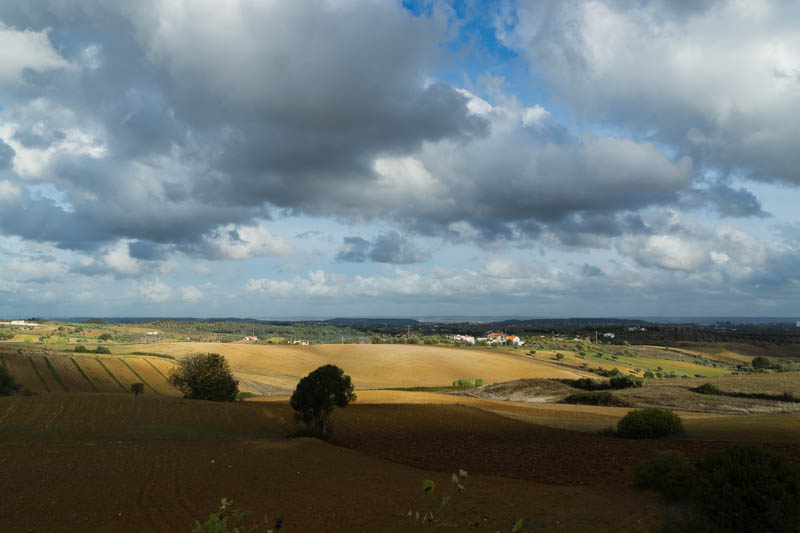 Portugal’s Cowboys and the bravery of Forcados

Here I was on the road again to get to know more of our Portuguese traditions. You may wonder about the link between Portugal’s cowboys and the “Forcados”. Well, on a quest to meet the first, I actually ended up by getting to know the forcados as well.

The first time I told my husband what the “forcados” do, he told me they can only be insane. After all positioning yourself in front of a raging bull and encouraging him to charge you is something you don’t see every day. Then seconds before impact, the attempt to lock yourself between the bull’s horns and stop him with the help of 7 of your fellow forcados is not an easy task. The bull is hurt but he is very angry and rightfully so.

At this point in the bullfight after experiencing what he has, he wants revenge and he could easily kill somebody and sometimes he does. He still has a lot of strength in his often 600 kg/1322 lbs so why would you want to put yourself in front of him, even call him out and say hey bull look at me, here I am, come and get me! Sometimes things go smoothly like this time.

And sometimes things can go awfully wrong. The “forcados” are allowed three tries and although they can be hurt and bleeding, they will still get up and will try again until they succeed. If everything else fails there is still the possibility of doing the “pega” (holding) sideways when they bring the “cabrestos” (tamed bulls) to distract the bull. However, what every “forcado” really wants is to get it right the first time

But as I said I wasn’t really looking for “forcados”, I was looking more for the cowboys and “campinos”, the cattle herders who in the beautiful “lezirias” or floodplains of Ribatejo raise and take care of the cattle, in particular the wild bulls used in the bullfights in Portugal. Risking their lives many times, they try to mould the character of the bulls to ensure a good performance in the bullfights.

In Portugal we do not kill the bull in the ring like in Spain. Depending on the bull, he will either be killed later or his wounds will be treated and he will return to the plains where he will be used for breeding.

This Ribatejo plain region is one of my favorites, the beauty of its landscape and the fertility of the soil is unmatched. It is also the land of the beautiful “lusitano” horses, an elegant horse with remarkable equestrian abilities and often used in the bullfights as well as other equestrian competitions. 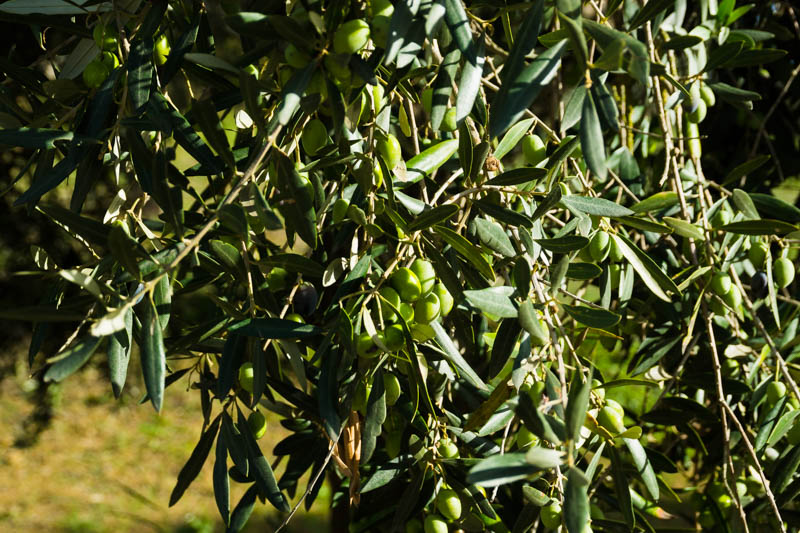 As I quickly discovered, summer is not the best time to meet anyone, there are lots of summer fairs and it’s high season for bullfights which keep the campinos very busy. After a few phone calls we finally got a positive response.

Again I have to applaud the extraordinary Portuguese hospitality. Our host, Paulo Pinto invited us to his ranch in Coruche without even knowing me. He told me he would show us how he trains the “cabrestos” which are the tamed bulls used in the training of “forcados”, in local festivities with the release of bulls, in bullfights to help convince the bull to leave the arena and in other contests and exhibitions. His ranch Quinta da Silveira is where all the “forcados” groups come for  training and his cabrestos have won many prizes.

We were warmly received by Paulo Pinto and his father, who showed us a bit around. When his father took us inside, I looked at the pictures on the wall and I saw several photos of “forcados”. One particularly called my attention as I recognized the late Mestre Baptista, considered to be one of the greatest Portuguese bullfight horsemen. Next to him is a “forcado” missing a shoe, no doubt lost in the exchange with the bull. To my surprise Paulo’s father told me that he was the Forcado in the picture. 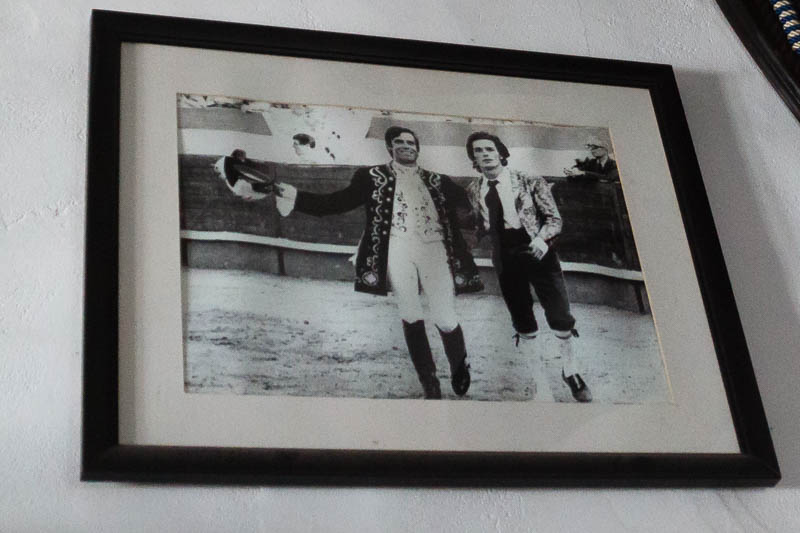 He had been a “forcado” for 5 years in the “Grupo de Forcados Amadores the Coruche” and his son Paulo Pinto had followed in his footsteps becoming a “forcado” for 10 years .

The father explained how worried he got for his son many times. He gave me a few examples of the many injuries he had suffered. Once he had broken the clavicle, another time he had torn his ear and another his mouth had been badly cut. None of it had made him stop during his time as a “forcado”. This is the spirit of the “forcado”, you get hurt, you get up and you do it all over again. Some unfortunately lose their lives and others sustain injuries that will prevent them from walking again but their love for the “forcados” is everything.

And if you are thinking that his choices reflect his limited countryside horizon, you would be wrong. Paulo Pinto is the creative director of an important multinational company. The various “forcado” groups are all amateurs which means they all have other professions. It is the love for their traditions and the land that drives them as well as the companionship and friendships gained for life. There isn’t a tighter group than the “forcados”. The trust you have in each other has to be very strong as your survival depends on your companions and how they will always have your back.

They went to get the “cabrestos” from the pasture so that they could show us what they do. 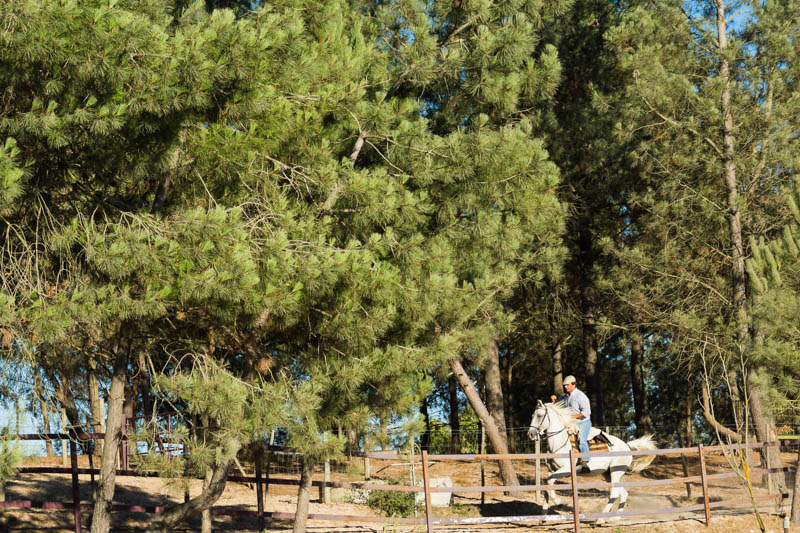 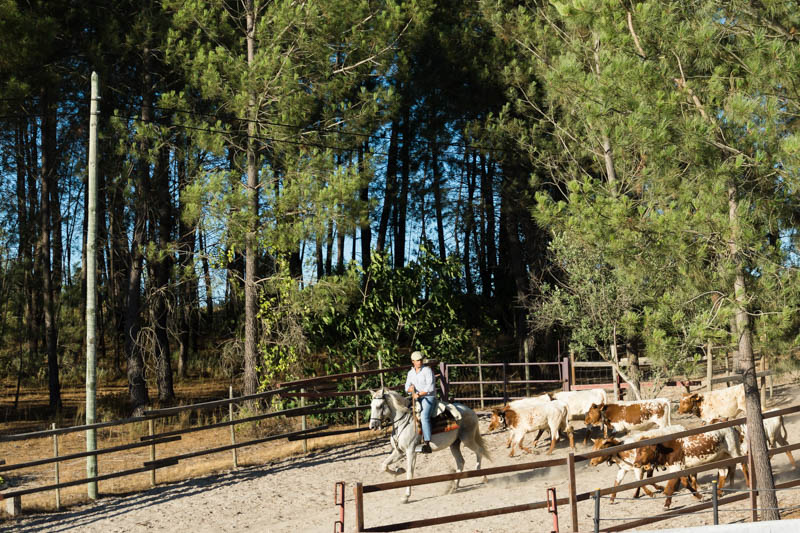 They were brought to the arena where the “forcados” train and we had a demonstration of their skill in lining the “cabrestos”. At three months a “cabresto” is already well managed but only at 6 months they are fully trained. His “cabrestos” are well thought of and they even come from Spain to get sets of “cabrestos” from Paulo Pinto. 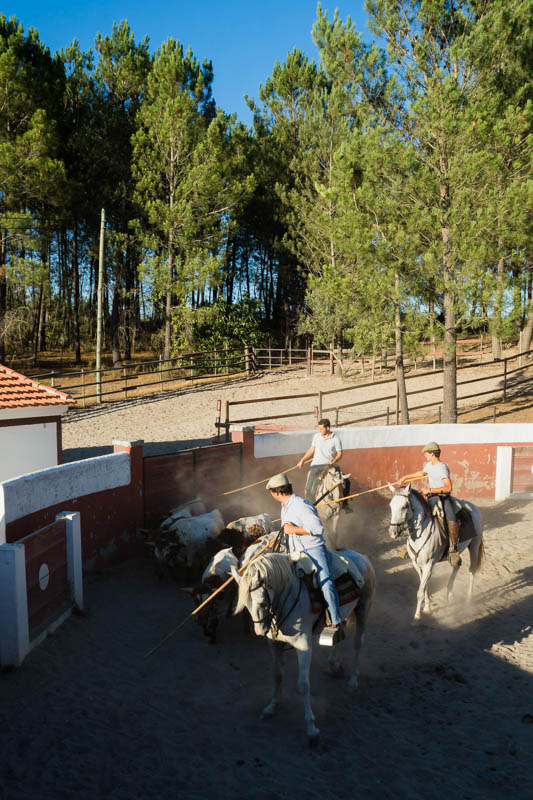 The long sticks are typical of the Portuguese cowboys and herdsmen 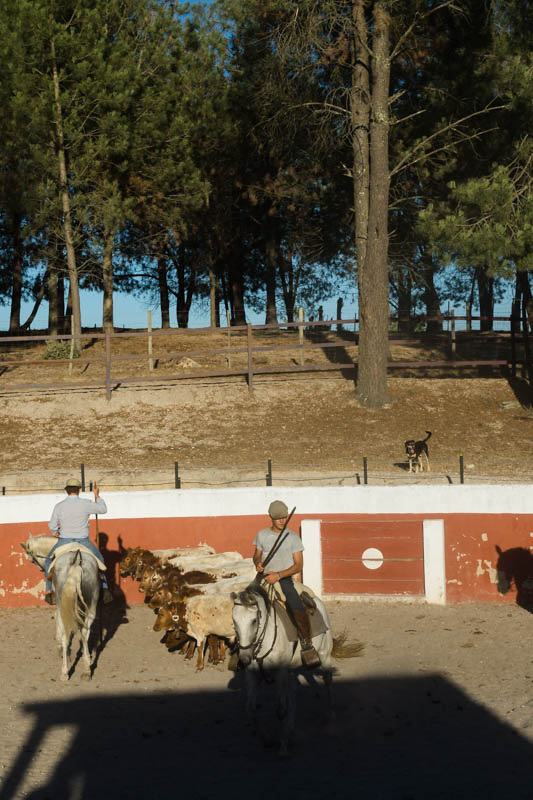 The “cabrestos” were then  taken to the enclosure as 3 needed their collars to be loosened up a bit. This needs to be checked and done regularly to make sure they are not getting hurt. 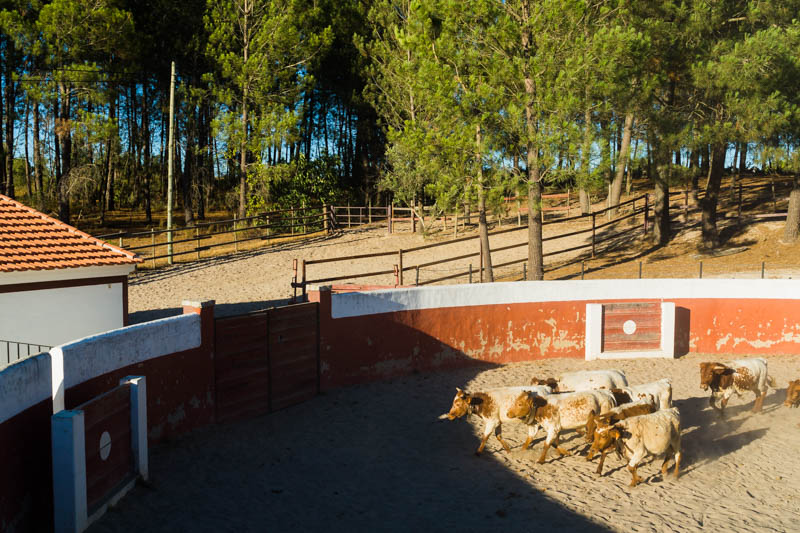 We could admire Paulo Pinto’s care and skill with his “Cabrestos”. Usually as he works in the city, he is more present at weekends when he gathers his friends and together they train the cabrestos. This is something he really loves to do. 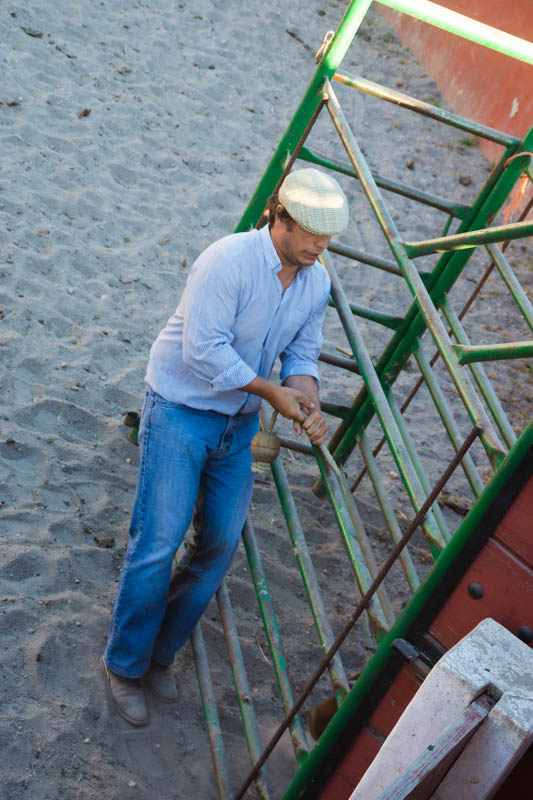 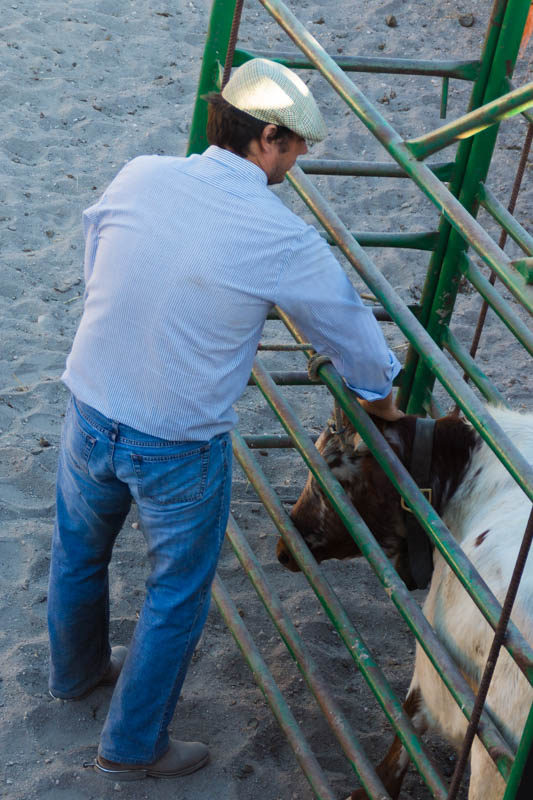 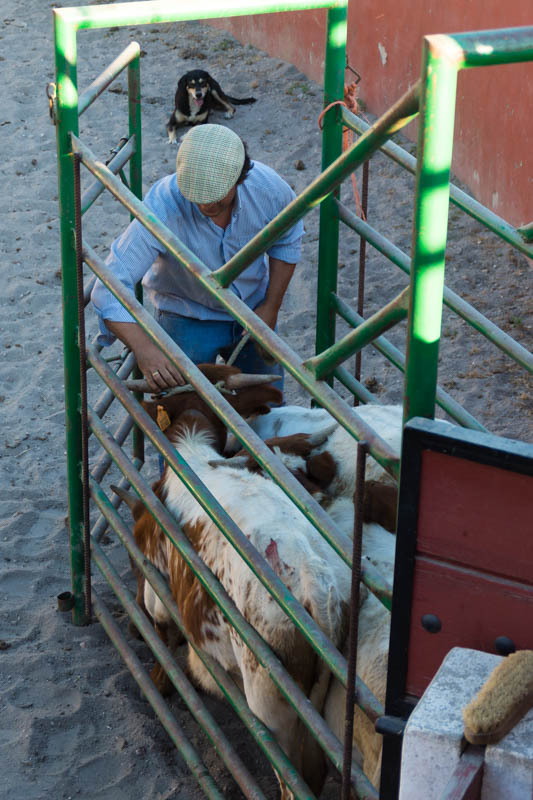 Afterwards the Cabrestos were returned to the arena and as we were watching, suddenly Paulo Pinto challenged my husband to go and help them, to understand better how you control the herd of “Cabrestos”. Although my daughter had great fun watching her father trying to control the “Cabrestos”, I must say he wasn’t too bad for an Austrian herdsman that is … 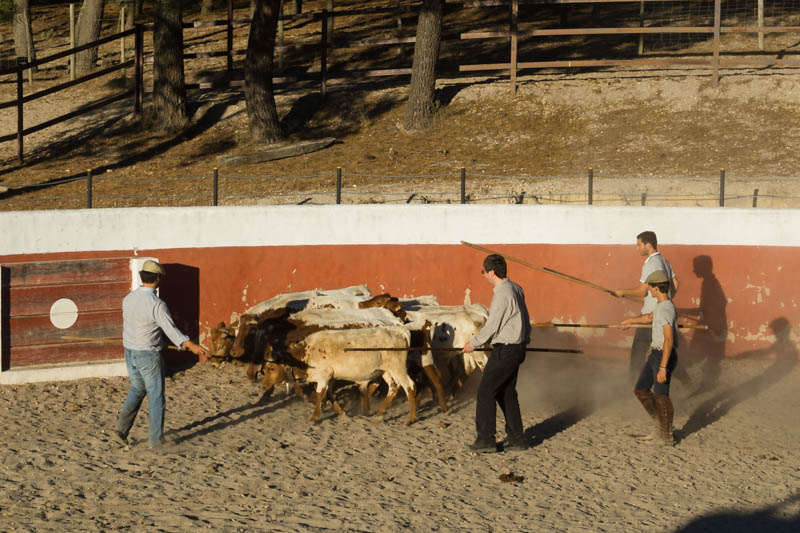 Then we all got to mount on the beautiful Lusitano horses. My daughter loved it and had no fear. I was really bad at it! But just the experience of getting near and touching this elegant animal more than compensated. 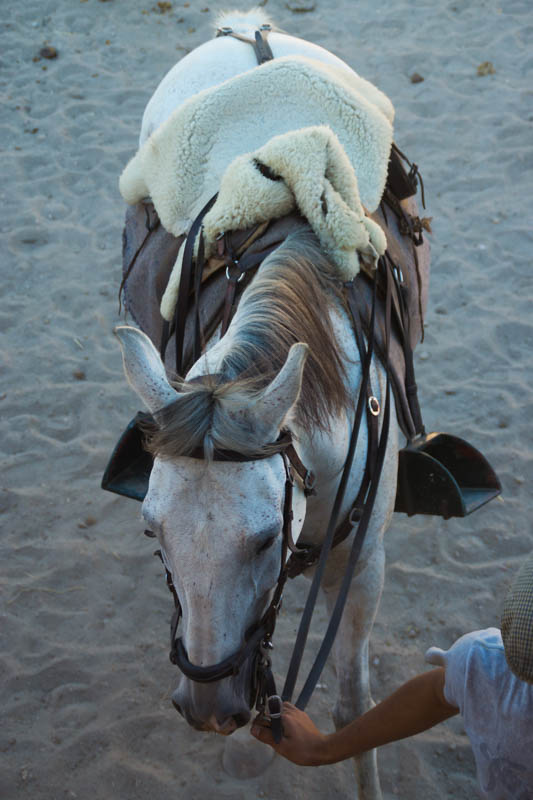 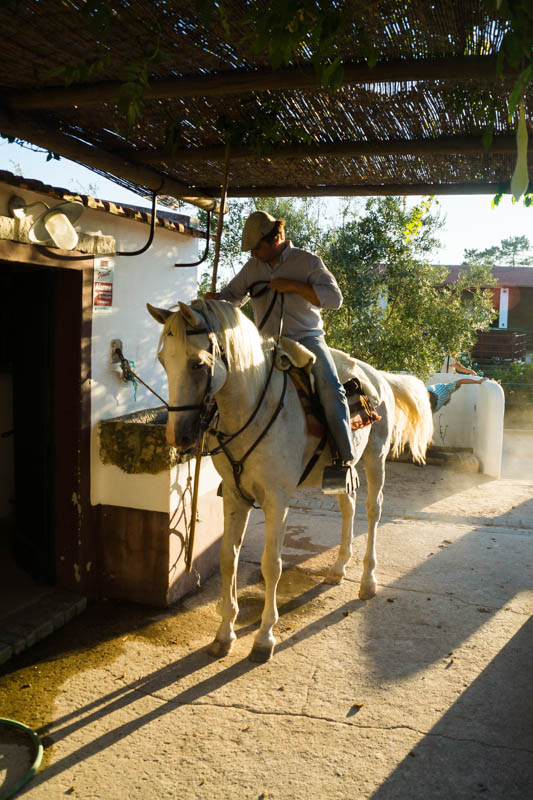 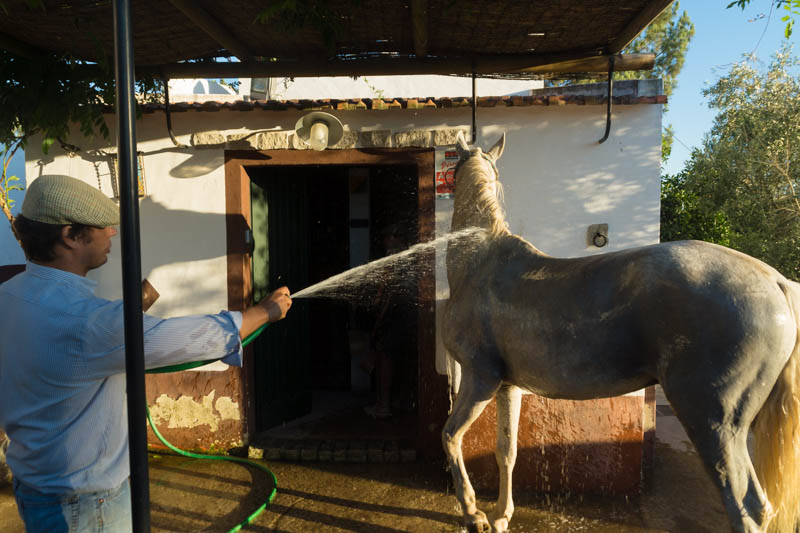 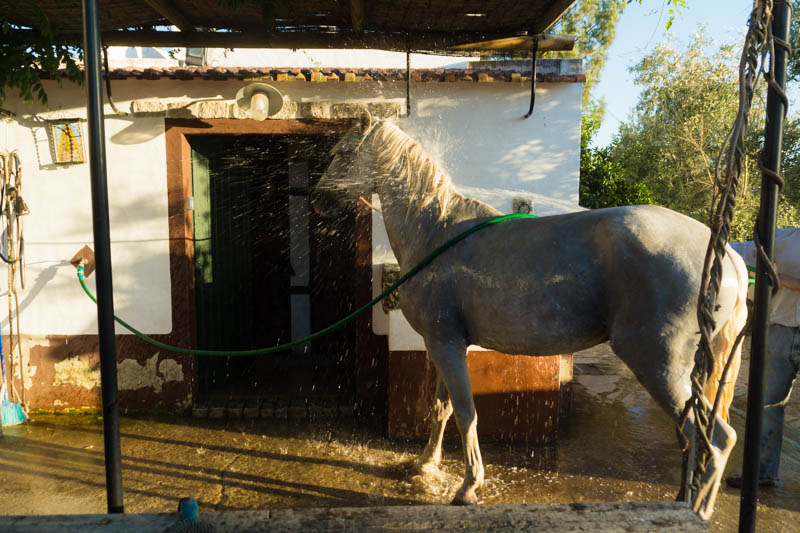 And there he is, all freshened up! 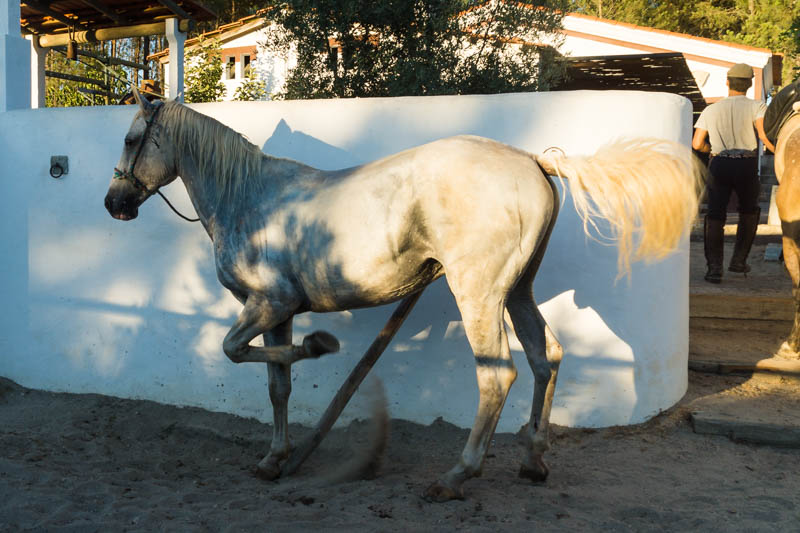 As we said our goodbyes and thanked them for their hospitality and generosity in showing us a bit of their world, I felt happy I managed to show my husband and daughter yet another part of my Portuguese culture. They even encouraged us to come back one day with more time, on a weekend to share a meal and witness more. Just before leaving I asked one last question. I was curious if  there would be someone to keep up the family tradition. They both smiled with pride and told us that Paulo Pinto’s son will for sure follow in his grandfather and father’s footsteps, as a small child he already shows determination and passion for it.

Regardless of how people feel about bullfights, I have the utmost respect for these men who, carrying no weapons or form of protection, face the bull with just their courage. Are they insane, brave or a bit of both? I don’t know but as I see the last cowboy ride into the horizon, I feel I understand their passion a bit more. 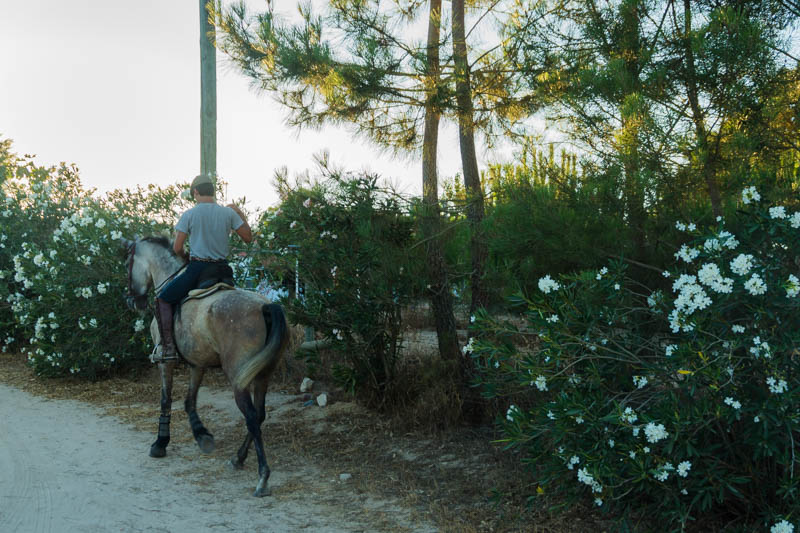