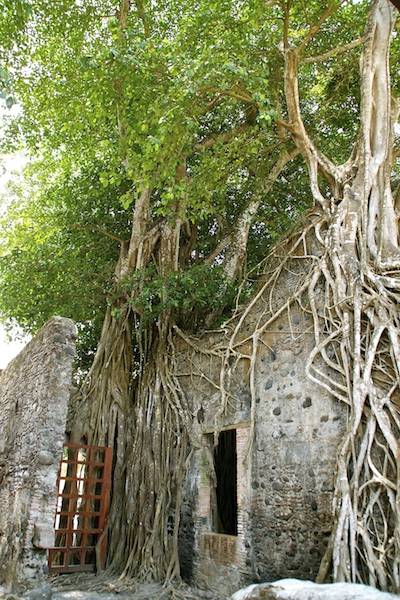 I’m on my last stretch here in Mexico and this Easter we had our last long trip that included three beautiful states of this great country. My last posts were about Chiapas and I really hope you have enjoyed them as much as I experienced and loved every moment.

Now it is time for the State of Veracruz. The city is and will always be very close to my heart. But I hadn’t ventured much outside. The sea, the strong coffee and incredible cafés, the fish, seafood, the music and dancing salsa on the street, always make me want to linger and stay put.

However, there is a past I knew from history books but had never come round to explore in situ. I had mixed feelings about it. When the Spanish arrived and conquered Mexico, they changed this country forever. Some will say they brought civilization, others will say they brought death and destruction. Right now the descendants of both have mixed in such a way that they are bound forever. What is left is history and the way each one chooses to interpret it.

When the Spanish landed at what is now the port and city of Veracruz on April 1519, on that memorable Good Friday, they found a desolate beach, swamps, vegetation and little else. The provisional camp on the beach proved fatal for some of Cortes companions. The extreme heat, combined with the stagnant marches infested with mosquitos, brought death through malaria, yellow fever and other ailments.

In spite of the conditions, the decision to stay longer came after being welcomed by the indigenous population. Being told about Montezuma and his empire and receiving gold as offerings convinced Cortes that more permanent quarters needed to be found. The fate of what would become the commercial capital of New Spain was sealed.

That is when Antigua was chosen. Better protected from the strong winds, it proved the perfect choice as the exit for the galleons or ships that took the gold and other merchandise from the colony to Spain. In 1574 200 Spaniards lived there with 600 black slaves. The slaves loaded and unloaded the cargo of the ships. Antigua is therefore considered by many the first real Spanish city in Mexico. It was named the “Vila Rica de Veracruz” or the rich city of Veracruz and it remained so until 1600 when it was almost abandoned  and moved to what is now the city of Veracruz. At that point it started to be known as “Antigua” which means the old city.

When you arrive in the center of Antigua the first thing you see is the beautiful “Parroquia del Cristo del Buen Viaje”, this church although more recent, dating from the mid 19th century, is worth a visit. 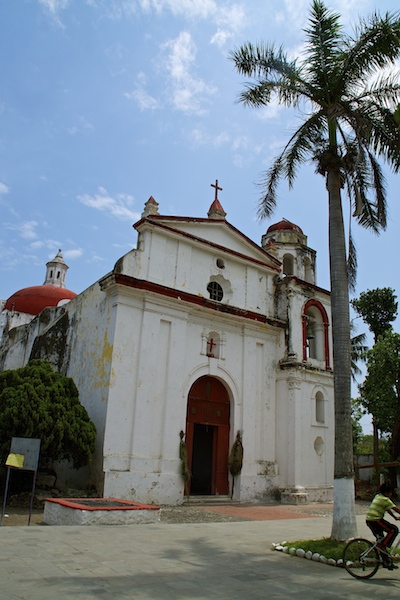 Inside you can find baptism urns made by the indigenous people 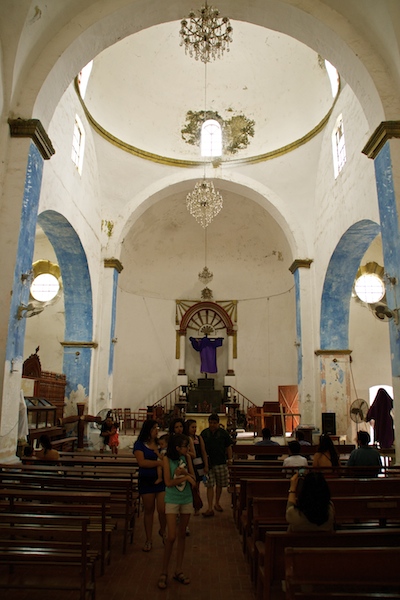 As it was Easter friday the saints were covered, some with a purple cloth as a sign of mourning for the death of Jesus. 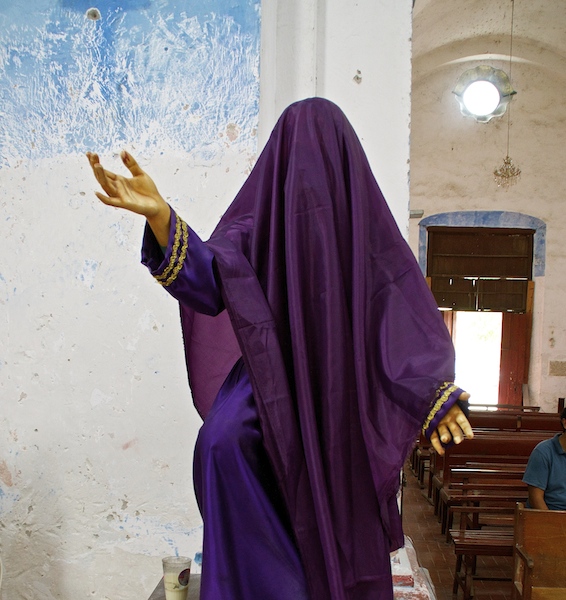 And Jesus was shown in his death 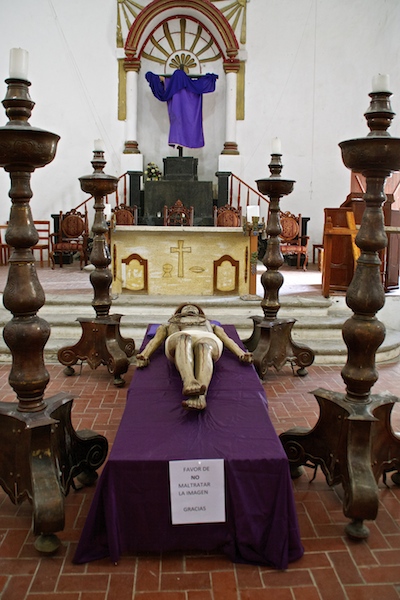 Next door you find the house that Cortez had built in 1523. They say the architecture is similar to houses found in Andalucia at the time. 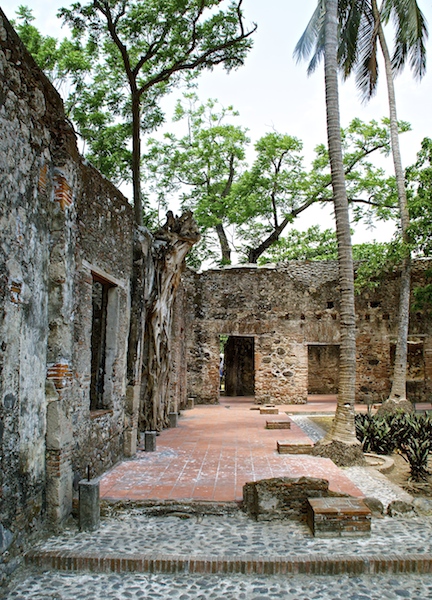 The house was built with coral, river and volcanic stones. 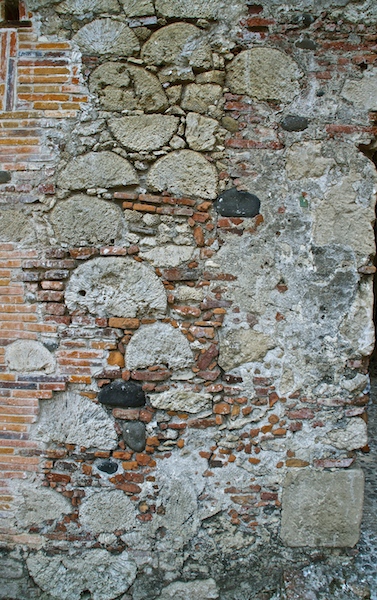 And has been taken over with time by nature. Tree roots and vines give it a rare beauty. 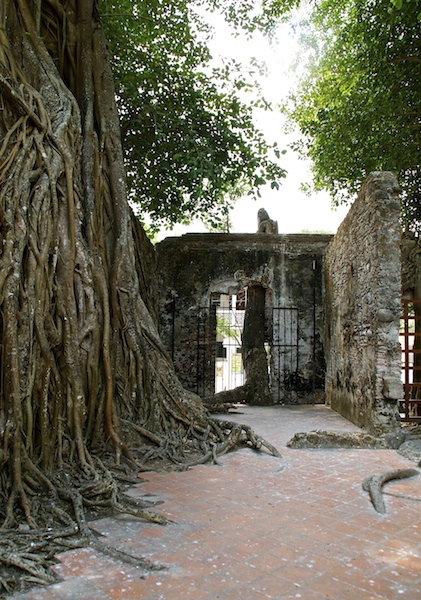 And even the hurricanes that every year attempt to destroy what is left. 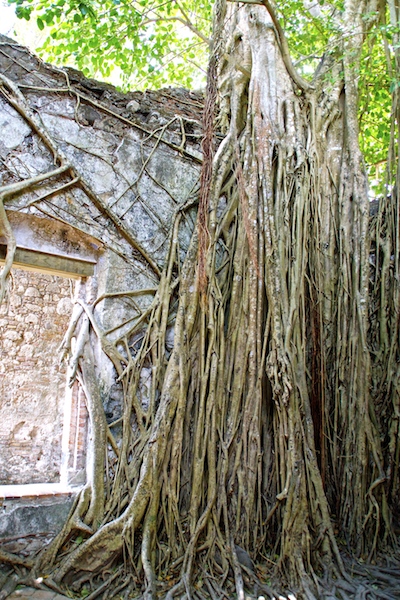 Outside you can also find one of the surviving canons brought by the Spanish. It is a remarkable place, these beautiful ruins have stood the test of time and are still a reminder of the past. You can choose if you would like to take one of the nice local guides who passionately tell you a bit about the background and history of the place or if you just want to visit this historical landmark at your own pace. 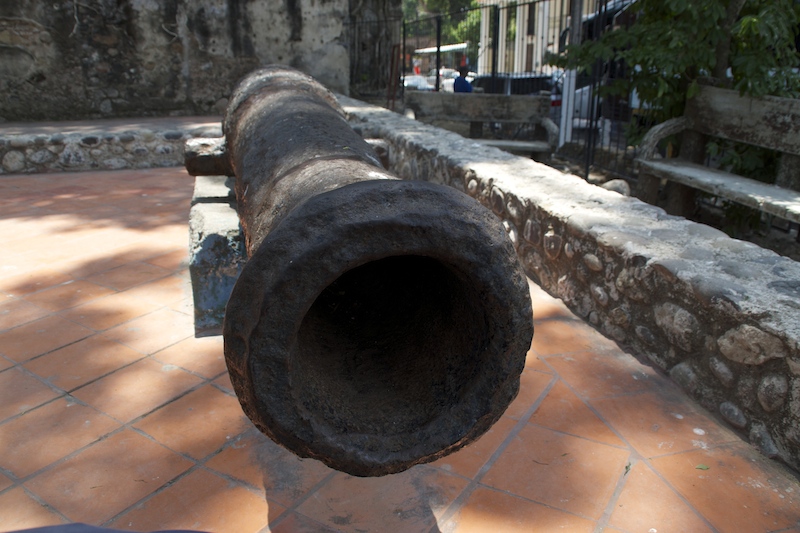 Built in the same year, 1523 and facing Cortez house, you find the first “ayuntamiento” or city council in Mexico. You can only see it from the outside but it is another witness of the past. 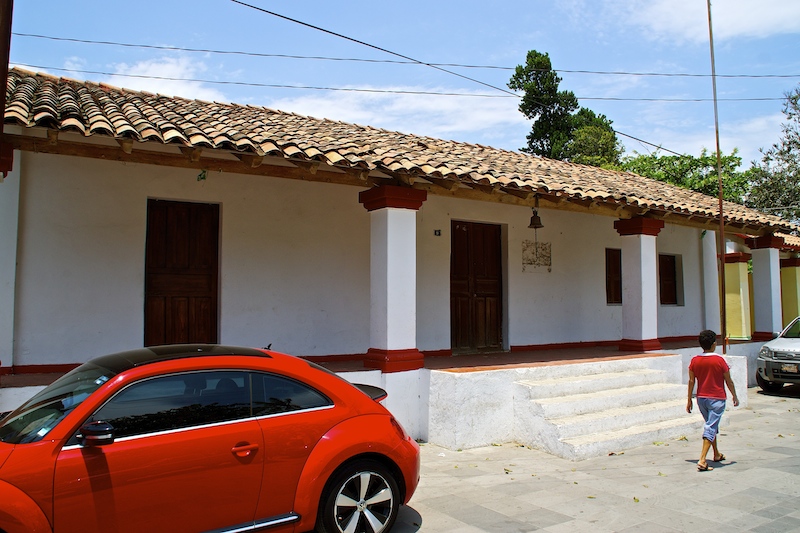 A few blocks way you have to visit the first church built in the Americas, la Hermida del Rosario. Built by Franciscan monks between 1523 and 1524, it is a  simple but charming small church. Outside you can see the 14 stations of the cross represented in small “talavera de la reina” Spanish tiles. 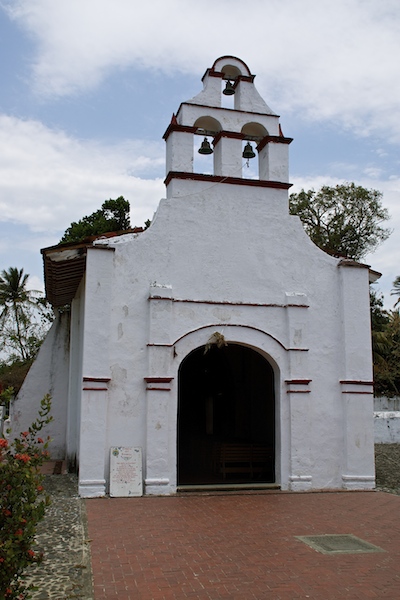 Inside the colours and the simplicity are just beautiful. 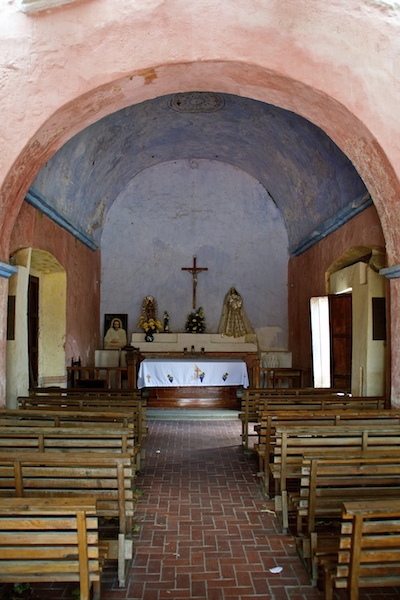 And here you can see the altar and the painted ceiling 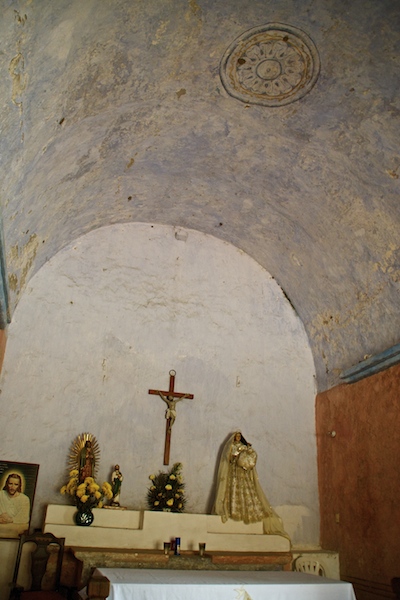 It is a very nice and peaceful place. 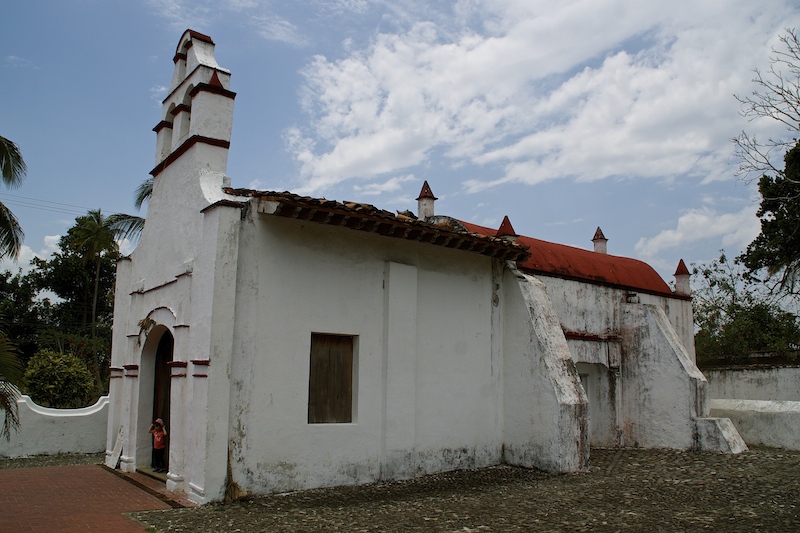 If you stroll a bit more in the center you can also see the ancient tree where they say the galleons or ships were tied to and the small handicrafts market. 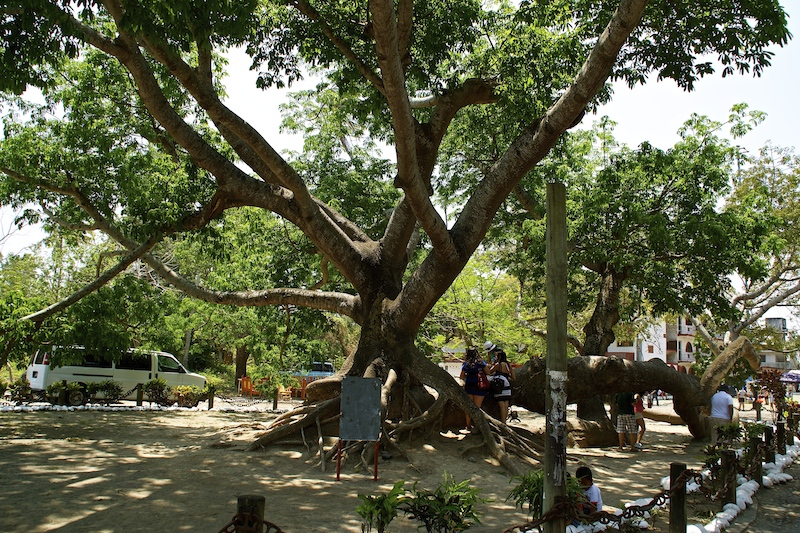 And if you are really lucky you may even see the famous “Voladores de Papantla” or flying men. Based on ancient pre-hispanic rituals this tradition is still very much alive. 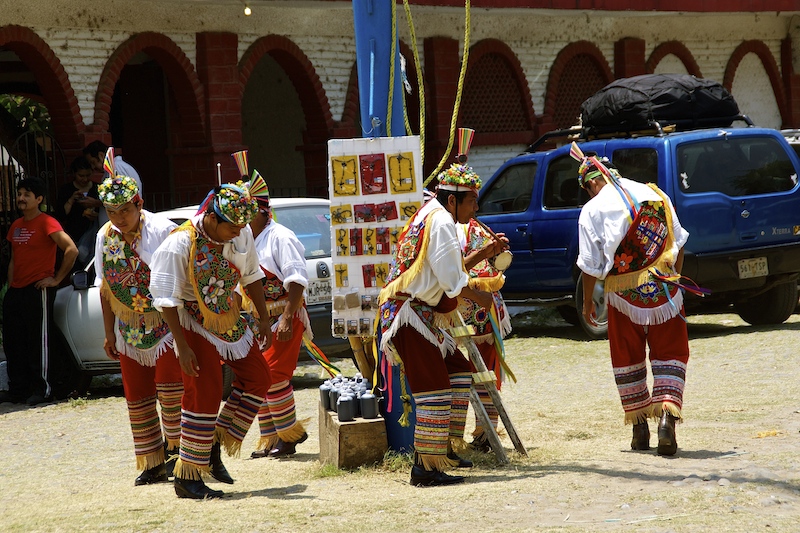 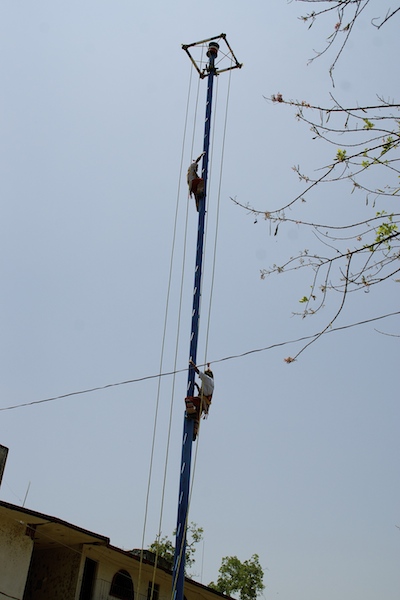 And once they reach the top they tie the end of a rope to the pole and the rest to their waist. Then 4 of the 5 participants launch themselves and start flying, circling the pole until they reach the ground. The fifth man usually stays up and plays a flute. 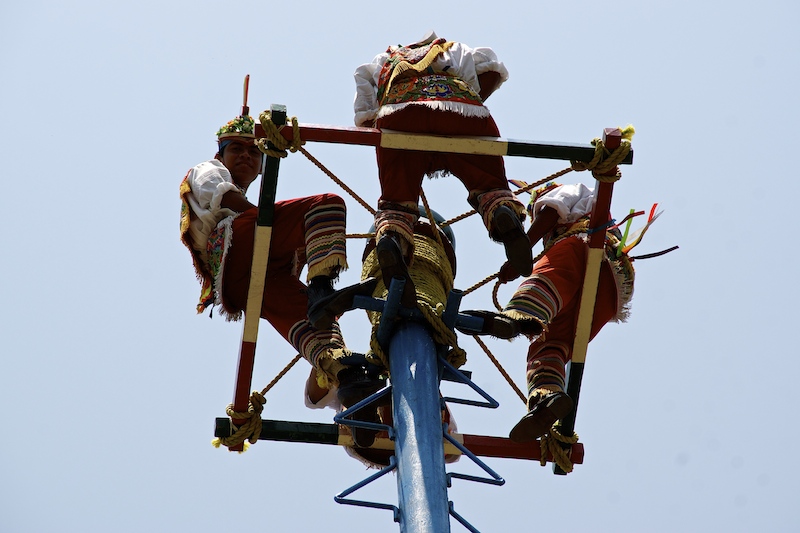 I truly admire them for their courage and always enjoy watching this ancient ritual. It was the perfect ending to our visit to historical Antigua. 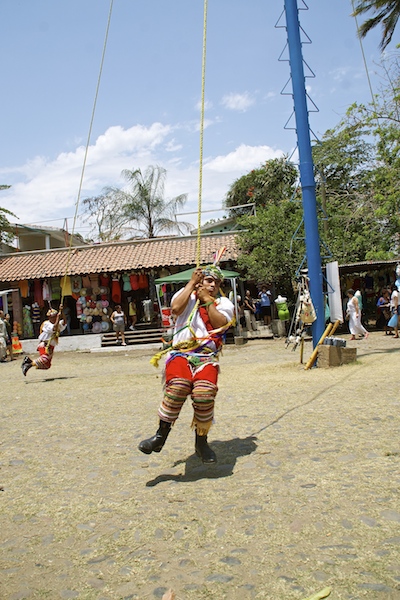