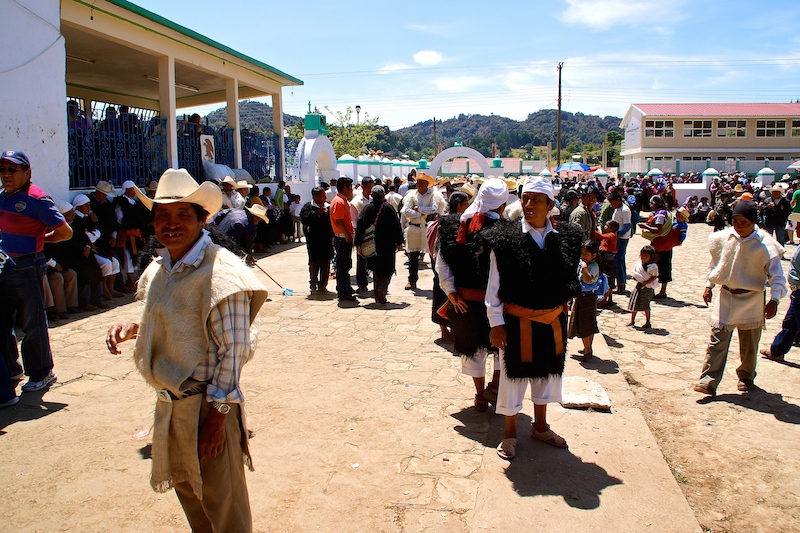 Since the first time I set foot in the unique San Juan Chamula, I was fascinated and touched by this highlands pueblo, whose self governing Mayan tzontzil community proudly displays its language, customs and culture.

Having fought very hard against the Spanish conquest, San Juan Chamula was one of the last communities to fall under Spanish domination in 1524. Their strong and defiant spirit can still be felt today. They govern themselves. They have an elders council who rules over the community, maintains peace and resolves disputes. They also have their own police force which usually wear white woolen vests and have a long stick as the only weapon permitted. 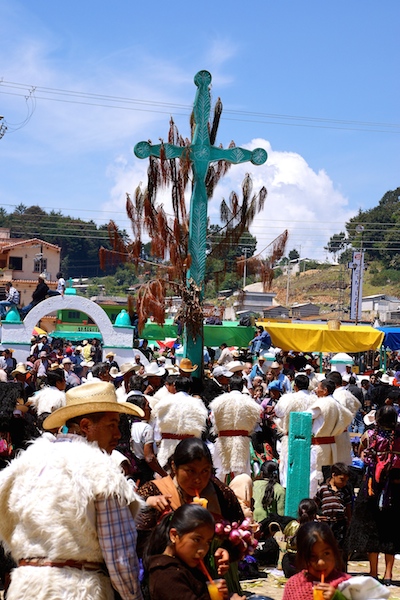 On market day, sundays, or other special days, you see members of the council meeting in the main square. They usually wear dark woolen vests.

Both times I visited San Juan Chamula I felt like I had stepped into a time machine and had just came out into another reality. One that makes me feel like an outsider but at the same time a grateful observer. It is fascinating how their pre-hispanic traditions are still very much alive and are an essential component of their way of living.

Even their cemetery is full of symbolism. They explained to me that the crosses have different colours depending on the age of the person when they died. 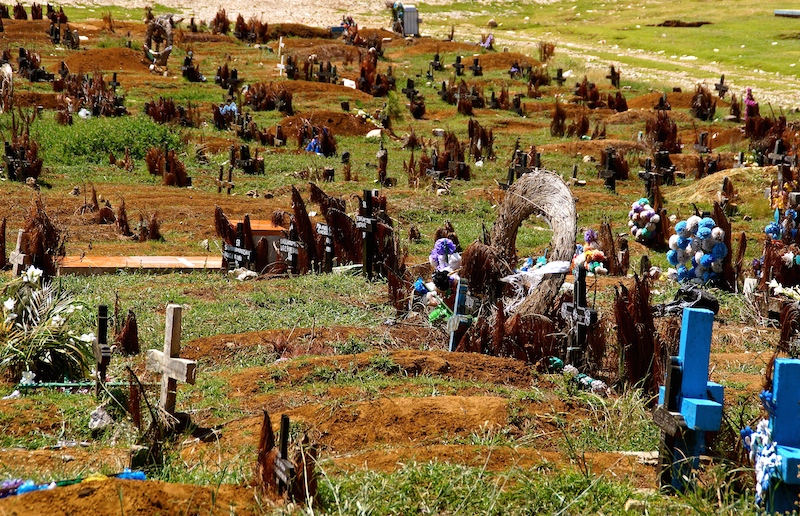 The church which dates from the 18th century is a remarkable place. Photos are strictly forbidden and you are warned just before you enter of the possible consequences (including jail) if you breake the rules. 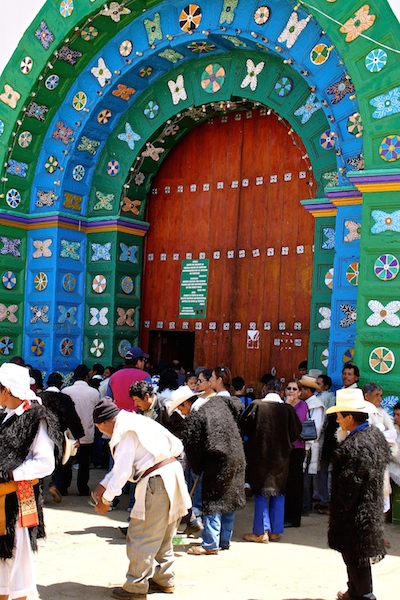 When you step inside for the first time you understand why. There seems to be a perfect fusion between pre-hispanic beliefs and rituals and the Catholic faith. You find yourself in another world. Your eyes take a few moments to adapt to the subtle and dim light and to the overpowering cloud of incense that hangs in the air. One of the first things you notice is that there are no pews. Instead you feel something under your feet, a familiar smell reaches you and you realize there are pine needles spread all over the floor.

Then you look around and see what looks like a shaman dressed in white performing catholic baptisms mixed with other unidentifiable rituals.

We also saw saints all around, some behind glass. You can see at least some of the saints adorned with mirrors which is said to be a prevention against the evil eye. The saints have all the right names but their faces look different from what you would expect. There is something about those faces … You’ll have to see for yourself. Making a circle around three of the saints were rows of men, women and children sitting on the floor. Some looked like they were praying, some just having a conversation. That first time, I was holding my daughter in my arms and when I passed by a row of women and their children they stopped me. They smiled and asked me something in their dialect that I didn’t understand. One of the oldest children translated it to Spanish and asked me how old my daughter was. I answered two. Then they asked me her name and finally the child told me they all thought she was very sweet and beautiful. They were all smiling and trying to talk  with me at the same time. They were so nice, my heart was touched.

We went a little further and reached what should be the altar but instead we found hundreds of candles lit on the floor, each in a different colour depending on what you were asking or what you were suffering from. Again there were shamans and healers present, they were also lighting candles. Sometimes they perform what in Mexico is called a purification, a ritual that is supposed to cleanse your body and soul. They either rub a bag with eggs in a person’s body or depending on the affliction, sacrifice a chicken in the church. It all depends on what your ailment is. I’m glad I didn’t witness any sacrifice.

When you step outside again you wonder if what you saw was real or if  you were just having visions of a very distant past. 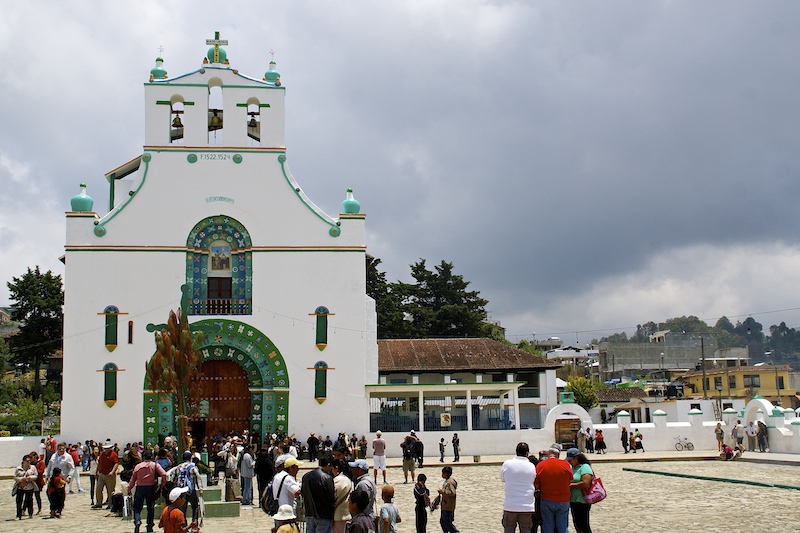 Outside the church you can take pictures but you should always be discrete and not force anything. There are women who are shy and they don’t like to have pictures taken or their children be photographed. And if they have a procession outside, it is again  not allowed to take any pictures.

Everywhere you look you are fascinated and want to grasp every detail, like the beautiful crosses around the square 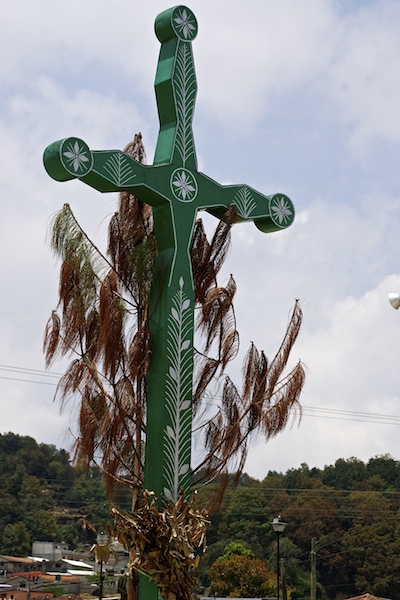 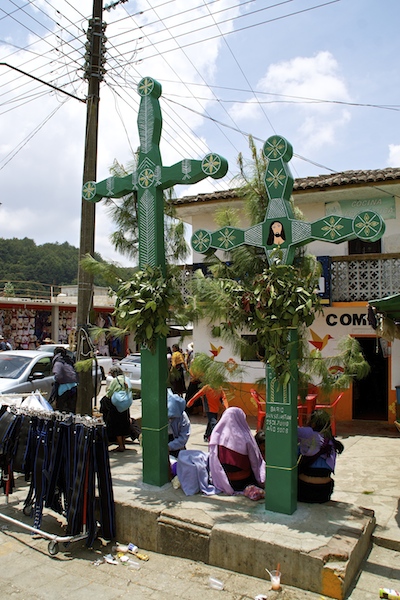 But mostly this noble, resistant people 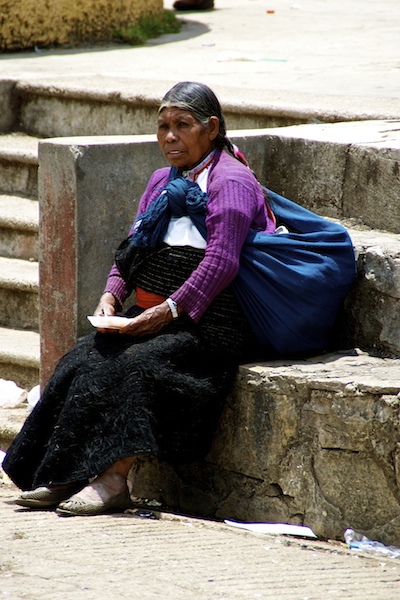 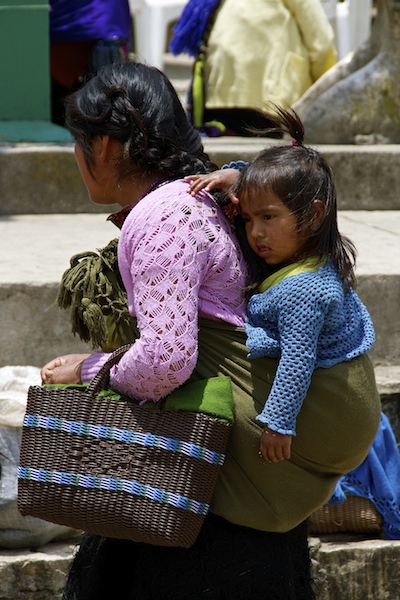 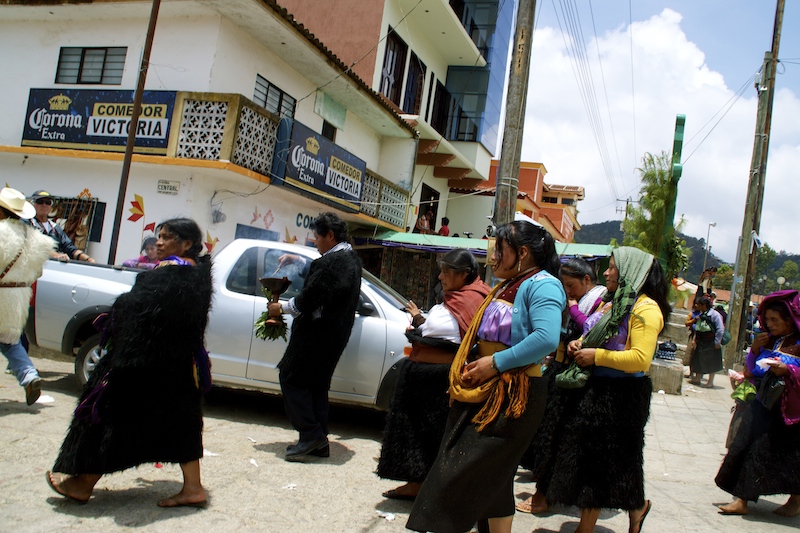 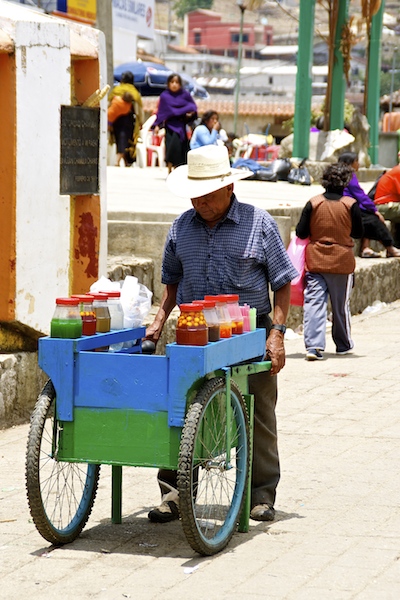 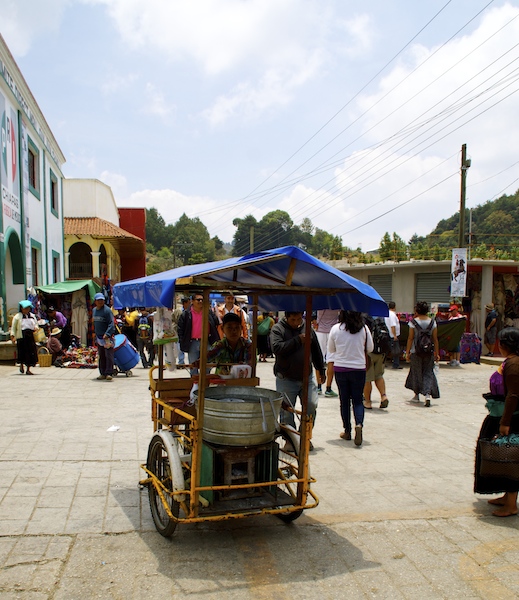 San Juan Chamula is popular with tourists and having the privilege of a glimpse into this Mayan community and their world  is something very special. To enjoy this experience you need to respect them and play by their rules. That is what I have always done here in Mexico. If you do that and don’t insist on taking pictures where it is not allowed they are usually very welcoming and you will enjoy this experience so much more. There is usually a nice handicraft market very near the main square. In San Juan Chamula as in Zinacantan they are known for their beautiful weaving and embroideries.