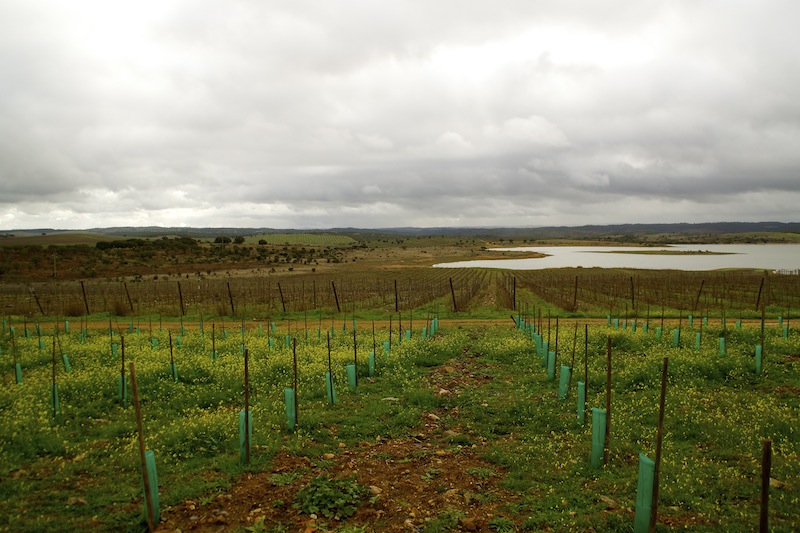 It is hard to explain what I feel when I see the plains of Alentejo. All I can say is that they always give me a sense of peace and harmony.

If I was a painter I would want to capture the colours and beauty of its impressive landscape. Alentejo has become refuge not only for painters but also well known national and foreign writers who have built houses here and get their inspiration from their surroundings.

With its Neolithic Pre-historic past still present in the form of dolmens, cromlechs and menhirs associated with ancient rituals, to traces of hard fought battles in historical castles, to Unesco World Heritage beautiful cities like Evora, Alentejo has a lot to offer. 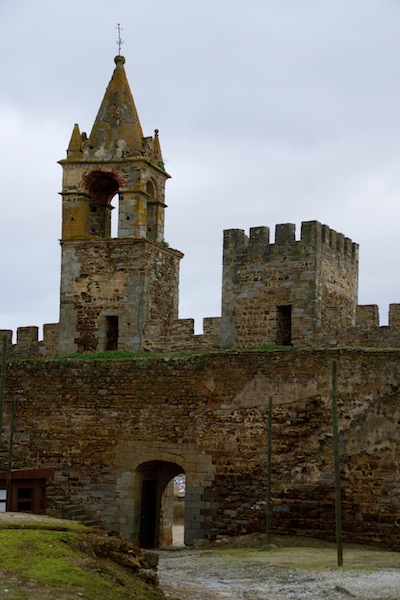 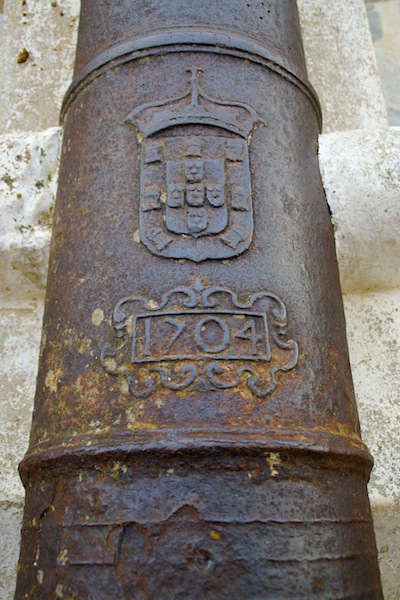 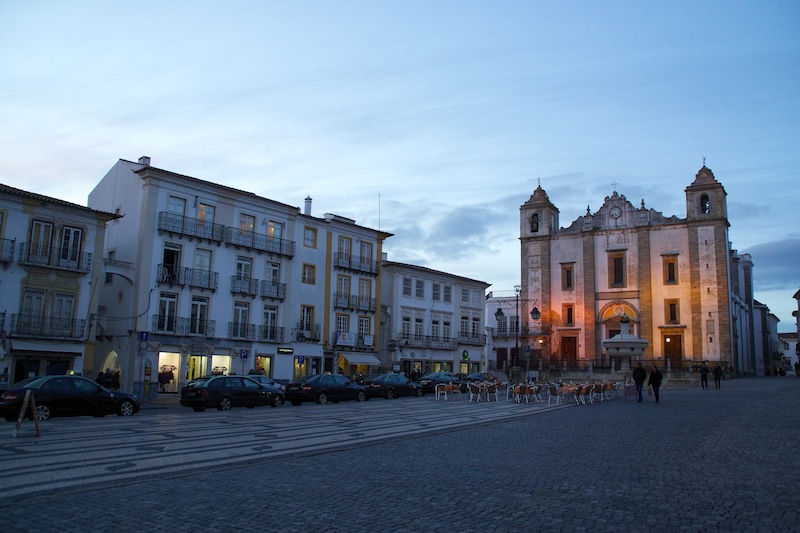 Besides the landscape of immense olive tree groves, which produce excellent olive oil and cork oaks used in traditional handicrafts, this South Central region of Portugal is also home to some of the best wines produced in my country.

Herdade do Esporao prides itself on being one of the oldest properties in the south of Portugal. Its boundaries have been established in 1267 by Joao Peres de Aboim, first official of the Portuguese Royal house. In the following centuries, descendants of the same family, also influential figures in the royal establishment, remained in possession of the property. Its boundaries never changed, thanks to the creation of a majorat that prevented it from ever being sold or divided. The following centuries were of prosperity for the estate and saw the construction of three historical monuments (designated as national monuments) still part of the estate today, a tower, chapel and arch dating from the 16th and 17th centuries. The 19th century and Liberal Revolution brought many changes. The Herdade do Esporao was no longer a protected domain but it managed to maintain its boundaries.

For a while it was in the hands of the Counts of Alcacovas until 1973 when a banker, Jose Roquette, bought the property and created Finagra, the company that runs the Herdade do Esporao. He saw the potential of the estate, the ideal climate to produce good quality grapes and wine and olive oil which the Herdade do Esporao also prides itself in producing.

The Portuguese grape varieties are unique and comprise the second largest collection of native varieties in the world. There is not an exact number of all the grape varieties. The number is believed to be between 250 and 280. The Herdade do Esporao has planted 180 varieties of which 37 are used in the production of their wines. These 37 are the best varieties adapted to the Alentejo climate. Usually the climate in Alentejo can be mild during spring, very hot during the summer months during the day, fresher at night and very cold winters.

Since 1997 the estate offers wine tours and other nature, cultural and gastronomic related activities within the property. When you arrive at the Herdade you can admire the 40 acres of vineyards and the beautiful landscape. The dam built in 1996 provides irrigation water for the vineyards and olive groves but has also become a sanctuary for wildlife. Several bird species and small mammals, some of them endangered, have found in the Esporao their refuge and habitat.

With this beautiful landscape in winter, imagine it during spring and summer when it is all in full growth. They have stopped tilling the soil to preserve the plant and animal life, as well as the humidity of the soil. They went so far as to install probes that constantly assess the state of humidity in the soil and control irrigation according to the needs of each plot, avoiding unnecessary waste. This has allowed Esporao to save a great deal of their water resources. 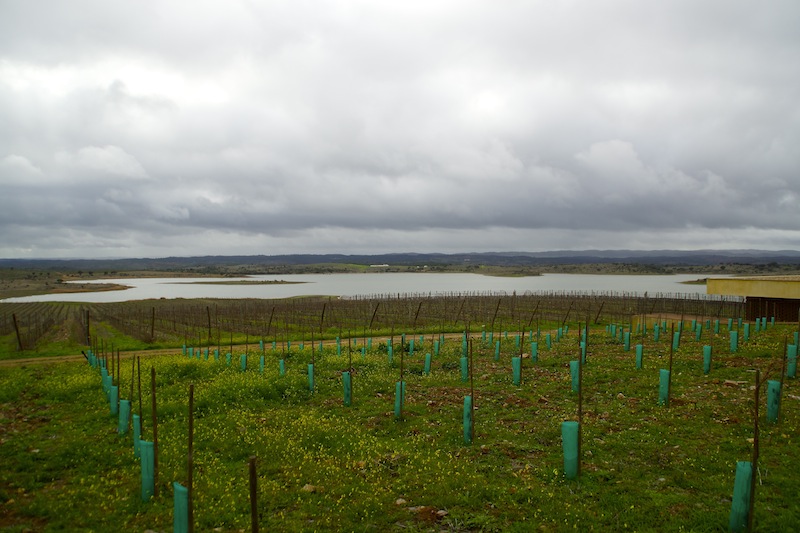 When you start the tour they explain that the grapes are handpicked by the same team every year. They chose to have a team of 100 people who have worked for them full time for many years. They are loyal and determined to choose the best grapes each harvest to produce the best wines. They are treated as part of the family and the owners, the Roquette family, have also committed to several social programs like the construction and operation of a kindergarten and other measures to make their workers and the community feel supported.

After the grapes are picked, the fermentation period follows. According to the guide, the traditional methods are still in use. A group of 4 to 5 people will crush the grapes with their feet to macerate them. Then the liquid gets transferred to a wooden barrel like this one. 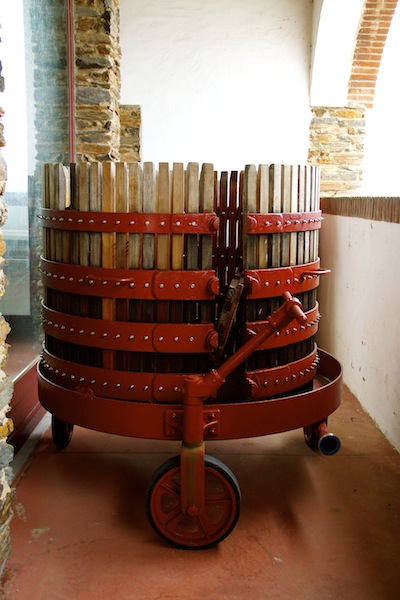 It is pressed and then, depending on the grape type and the wine being produced, it is transferred to metal cylinders for fermentation which may take 7 to 8 days. After fermentation, it is transferred to mature either in bottles or French or American oak barrels. In the case of red wines like the wine Garrafeira – Private Selection for example, only French oak barrels are used for aging. 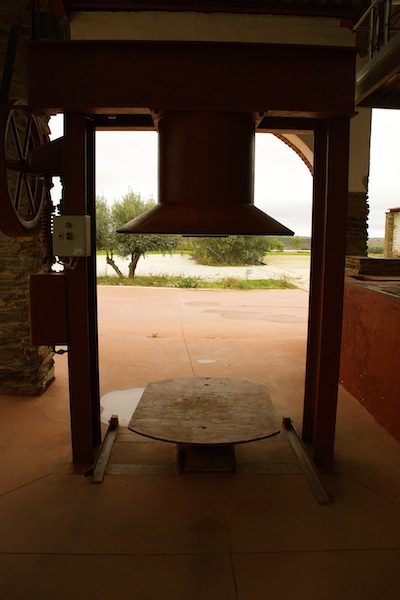 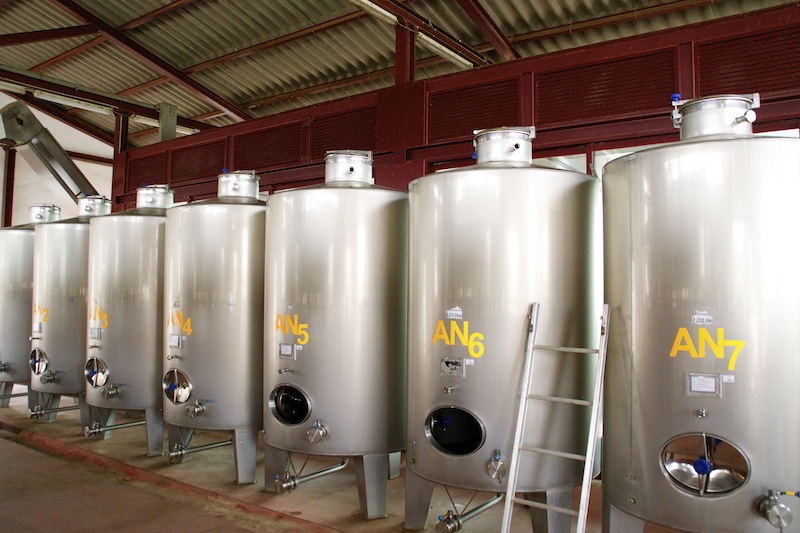 In the case of the white wines, these are initially transferred to these metal cylinders to ferment. Then the cheaper wines will mature in bottles, the rest will mature in French oak barrels for 6 months like the Esporao Private Selection or in American oak barrels for 3 months like the Esporao Reserve. These oak barrels will be used for a period of 4 years and then sold. They can be used for the aging of spirits like whiskey or brandy, to age Port wine or even to get converted into furniture. 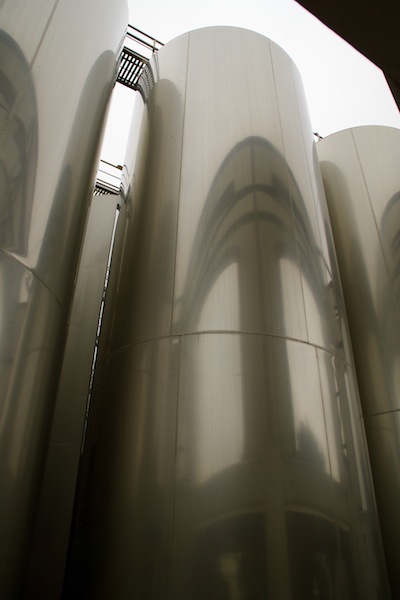 Next we visited the production line and were fascinated by the different bottling, labeling and packaging used in each particular wine. 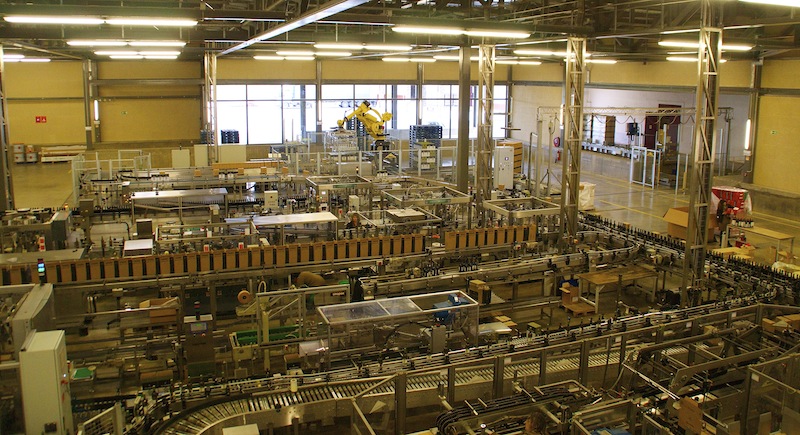 But my favorite had to be the beautiful wine cellars. When you enter this underground world which was built so that the temperature and humidity are controlled in an entirely natural way, you can’t help being fascinated. From the private cellar of the estate with its very special collection …

And finally the huge cellars with different types of wine maturing in the wonderful oak barrels. 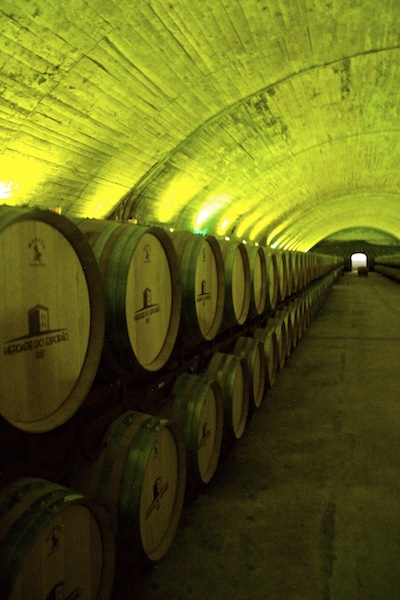 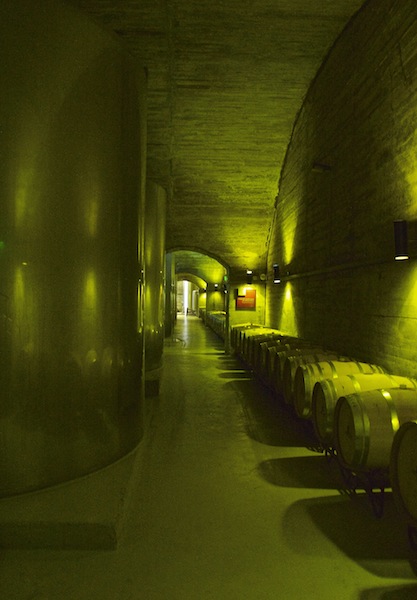 When you come out of this dreamy underground world, the fun part starts: wine tasting! 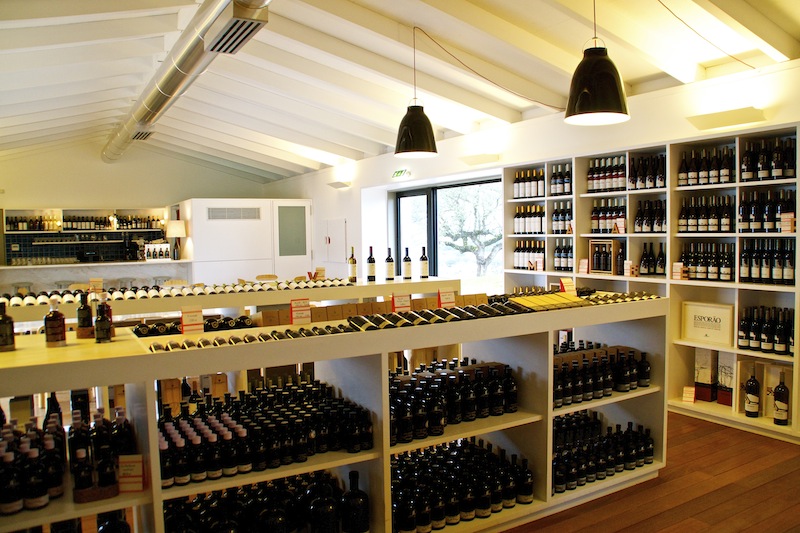 Initially we were given two of their trendier wines to taste, they are called Defesa white and Defesa red. The white was nicely light and fruity, ideal for an aperitif or to accompany fish. The red had more body and is better paired with meat. 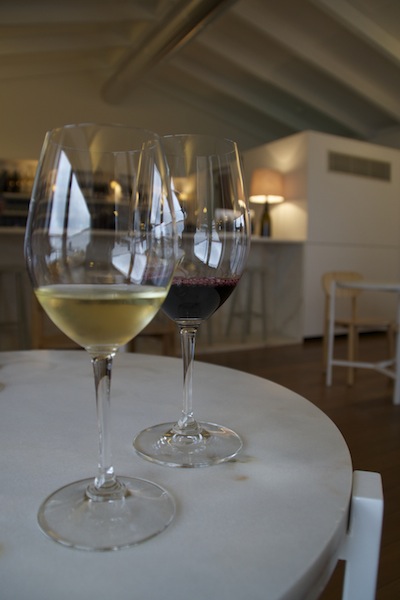 Then you can ask to taste other wines. My husband was curious about the Esporao Reserva White 2011. They had told us 2011 had been a particularly good year, climate and harvest wise. This Reserva won a Gold medal and the prize for the “Alentejo White Trophy” at the biggest wine competition in the world, the International Wine Challenge 2013 (IWC). I must say it did not disappoint. It had a rich fruity aroma with identifiable tangerine and apricot notes and a quite complex palate, very fresh and fruity. 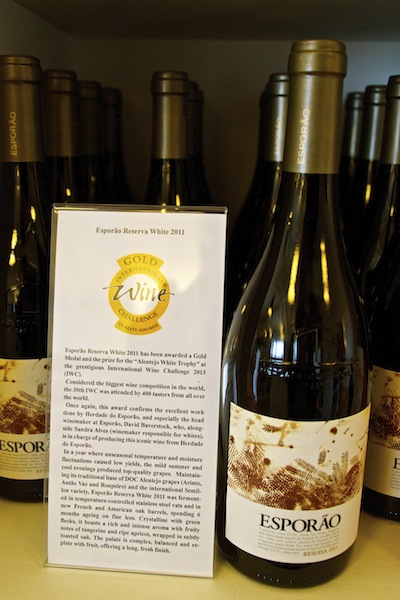 Next we chose the Quatro Castas or “4 Casts”. As the name indicates it is made with 4 different grape varieties and it changes every year depending on the year’s harvest and which grapes fare better. The 4 grape varieties age separately initially and then are combined. The Quatro Castas is aged in French and American oak barrels for 6 months and then in bottles for a further 6 months, before it is released to the public. I really enjoyed it, it is a full body wine with a nice berry aroma. 2011 was really a great year for the different grape varieties. 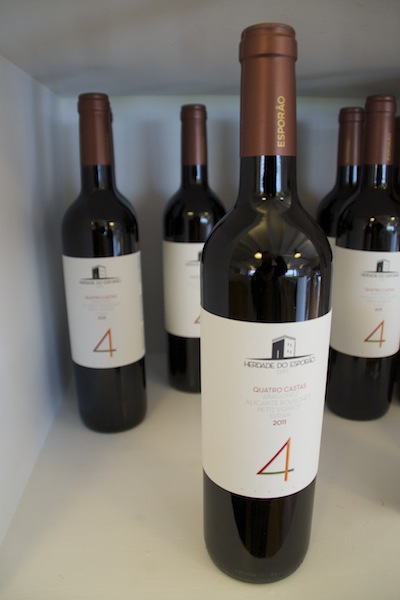 We finished off with the Esporao Private Selection 2012. It ferments in French Oak barrels and ages for 6 months. We found it was a very elegant wine, well balanced with citric and fruity tones. 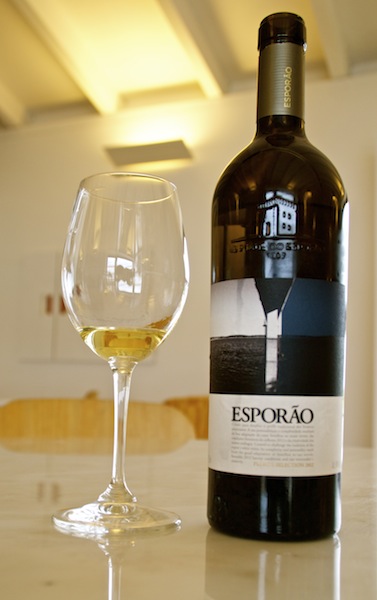 I could not leave the Herdade do Esporao without tasting their best extra virgin olive oils which I often use for special salads or fish dishes. The tasting is usually accompanied by wonderful Alentejo bread. This is what I was presented with.

From left to right: Cordovil is a single variety olive oil which is made with green olives. It is a light, slightly bitter and spicy olive oil with a fruity aroma. Seleccao is made with four different varieties of olives and has an apple taste, slightly bitter and a touch spicy as well. It has a more complex taste. Dop Moura is made with three different types of olives. It has a slight almond taste, it is more complex and quite intense, I really enjoyed it. The last one, the Galega, is a single olive type oil, it is the most common in Portugal. Fresh and smooth it pairs well with more complex dishes. Their olive oils have won prestigious international awards. Most recently, Herdade do Esporao olive oils won two “Grand Prestige Gold” medals in Jerusalem.

It goes without saying that we could not leave without buying some wine and olive oil. It was a  great experience, one I highly recommend if you happen to visit Portugal. And  you should not leave Esporao without trying the delicious food at their signature restaurant. More on that on Esporao Restaurant – a gastronomic tour of the senses.

If you want to know more: