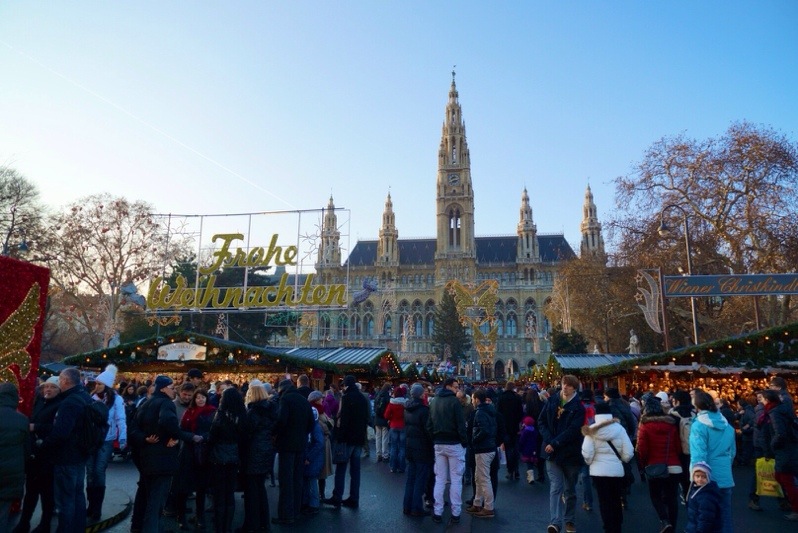 The biggest Advent market in Vienna is set in front of the beautiful gothic Rathaus (Vienna City Hall), built between 1872 to 1883. The clock tower holds a special symbol on top, a medieval armoured knight holding a lance supposedly based on a festive armour of Emperor Maximilian I. You can hardly recognize him since the tower is 98 m/321 ft and the knight is 3.5 m/20 ft tall on top. The City Hall holds the seats of both the mayor and governor combined in one person and also houses the City Council and Assembly.

The Christmas atmosphere at the Rathaus is a festive one. Being the biggest christmas market in the city, it also attracts a lot of the tourist population in the city, who are drawn to the 150 stands offering from regional food items, to handicrafts, Christmas decorations, and Viennese souvenirs. There is a little of everything, for every taste and a large crowd originating from all parts of the globe.

When you arrive, you get the wonderful smell of roasted chestnuts 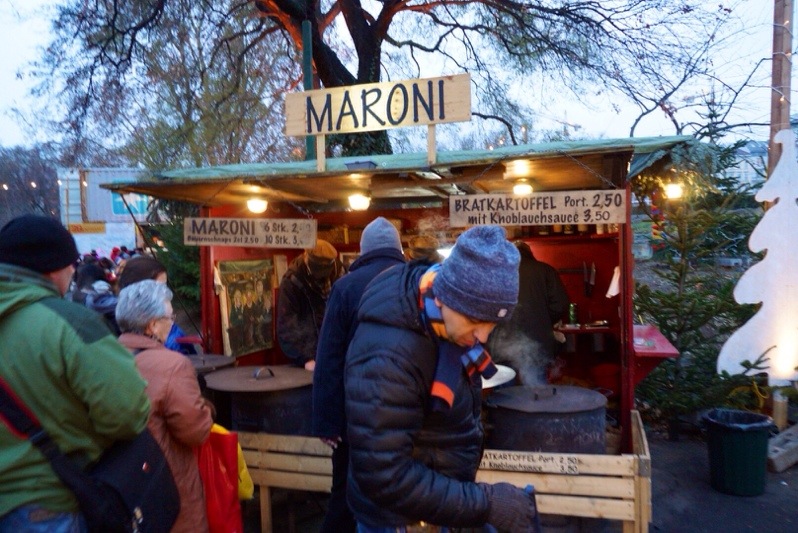 The perfume of the punsch and gluehwein 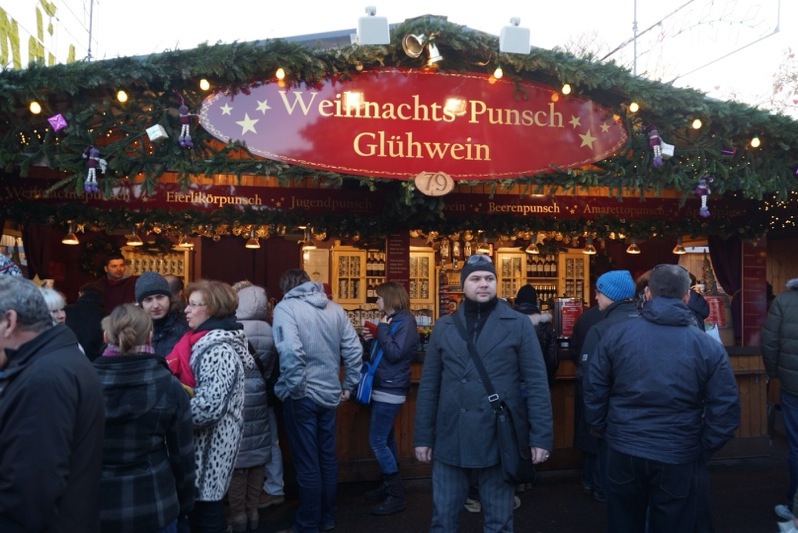 The romantic appeal of the marzipan cookies and houses 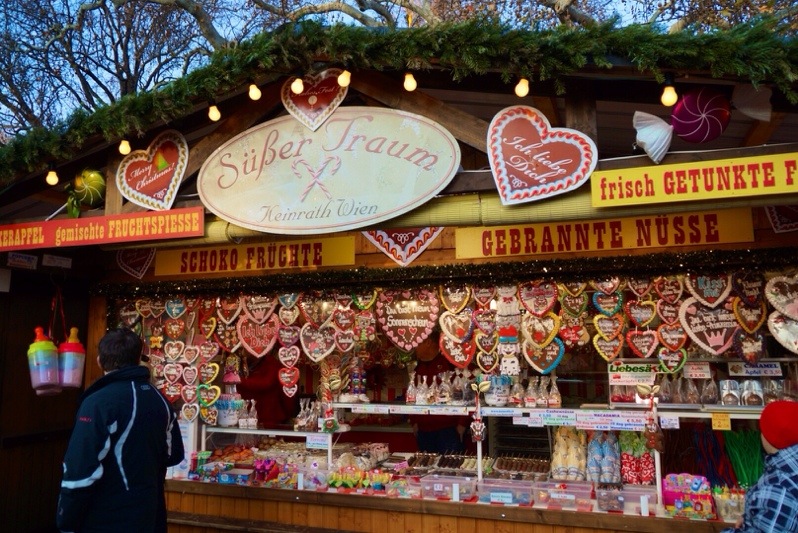 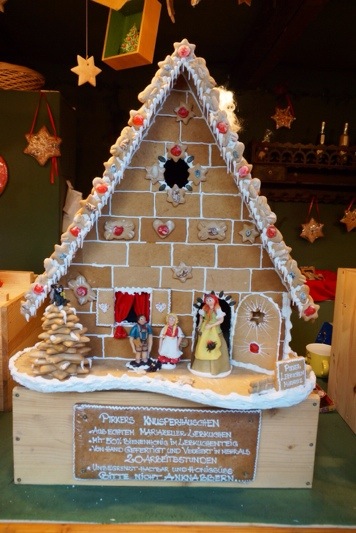 And the calling of the wide variety of cakes and other sweet temptations leave you indecisive, which way to turn first? There was a momentarily distraction provided by a group of lively Italian tourists who begged for a group photo holding their matching gluehwein cups and then we ended up here! We were admiring the many sweet pastries until my husband suggested we try the Stanglkropfen you see on the right. A specialty of Tirol, it is basically a stick with several small cakes made with donut dough and alternating with slices of fried apple. So good! 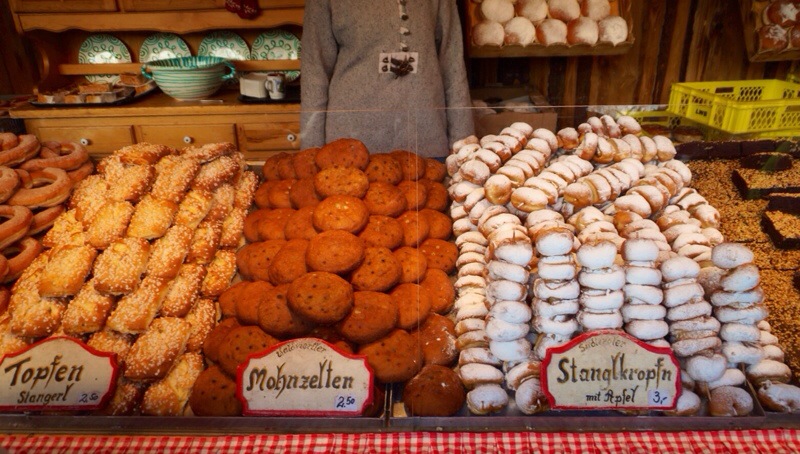 In an Austrian market you could also not miss the wide variety of sausages, hams and other meat delicacies that are an important part of the Austrian diet and traditions. 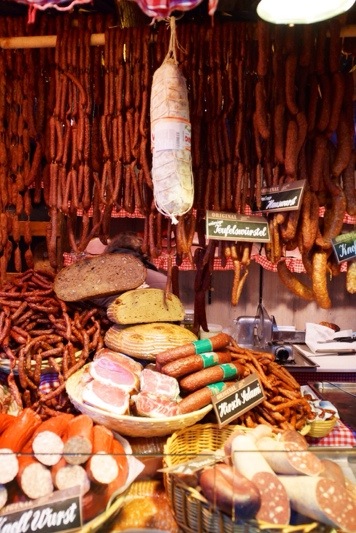 And then you just stroll around the stalls, between the Christmas decorations, candles, olive wood Christmas cribs or the usual souvenirs, while enjoying the lively wintery celebratory atmosphere. 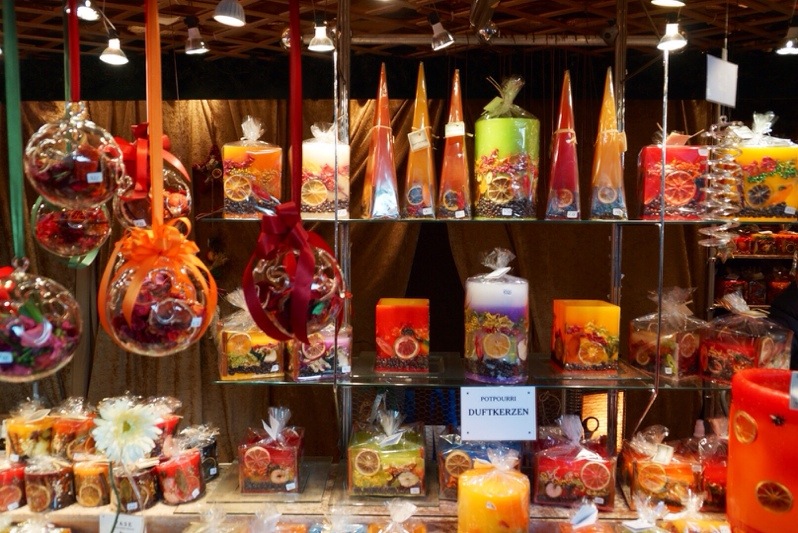 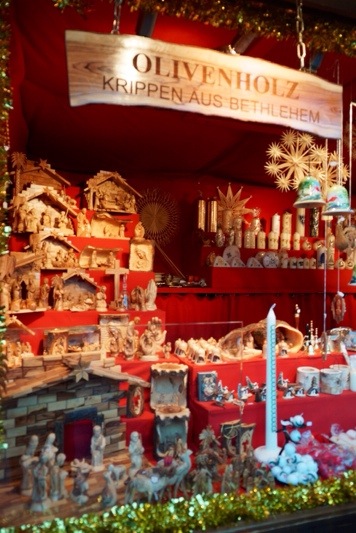 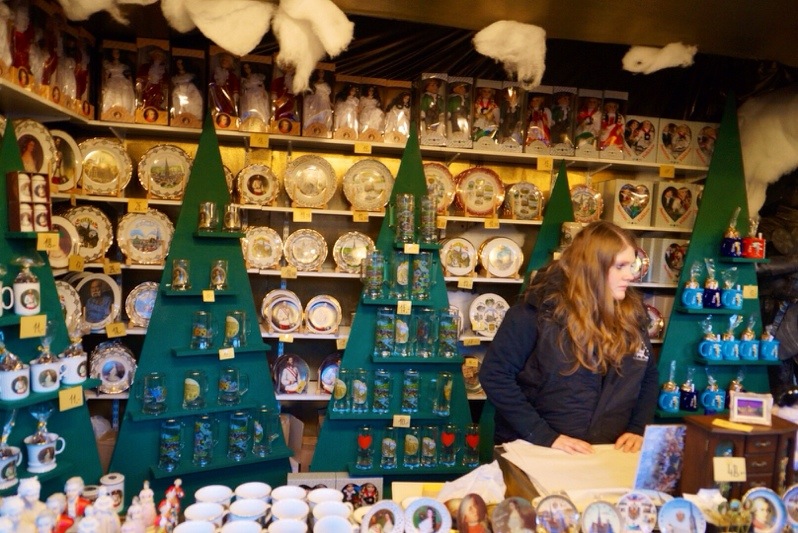 You can even pose as an angel, play with the Smurfs, or just admire the beautiful City Hall, its Christmas decorations as well as the Park next door. 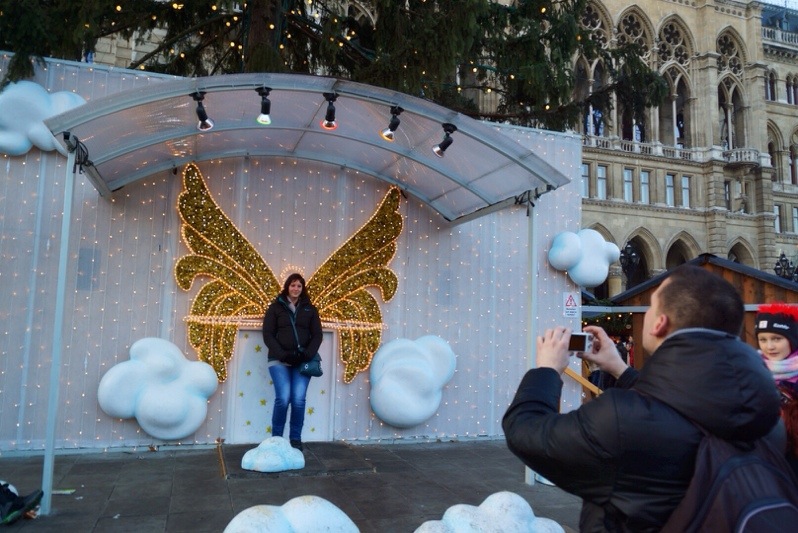 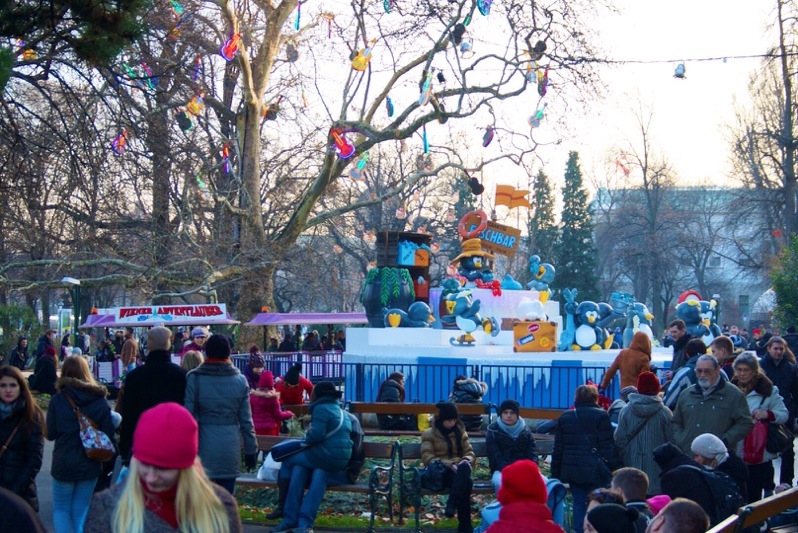 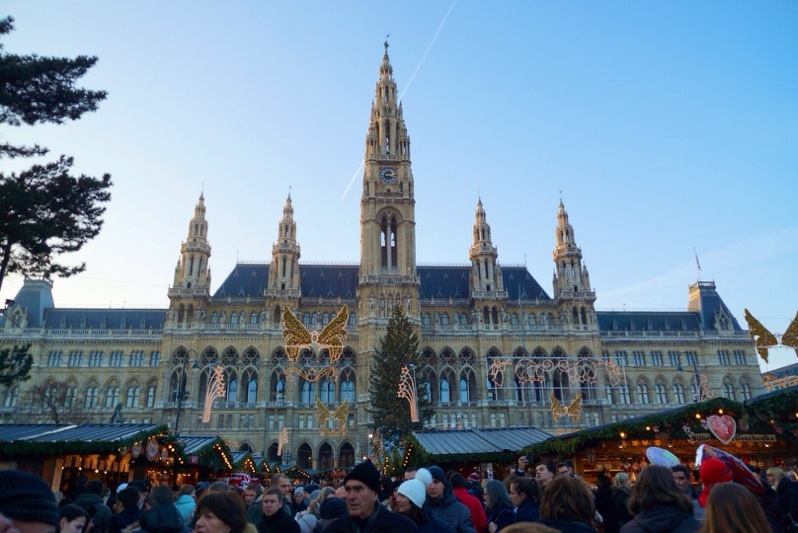 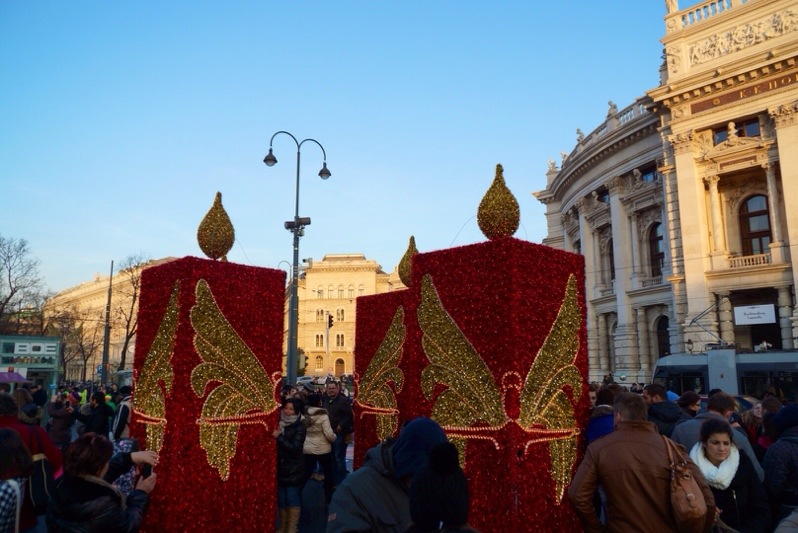 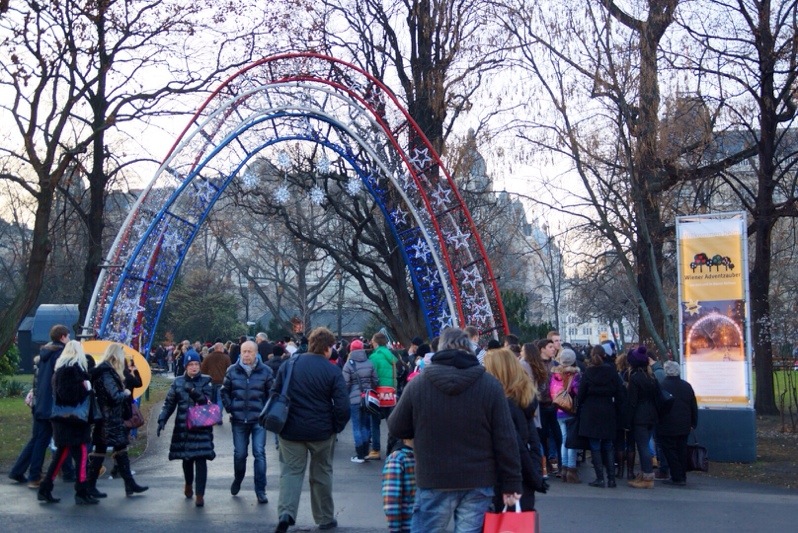