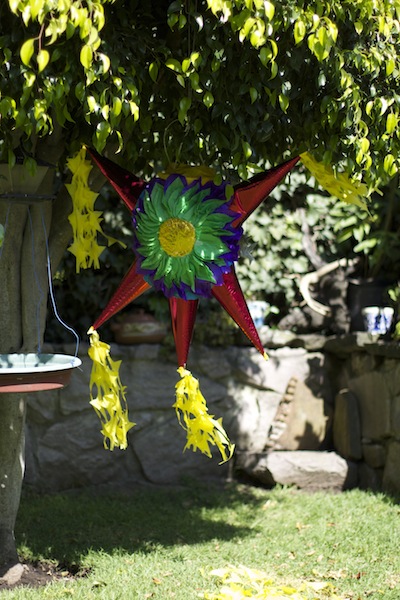 The first signs of Christmas in Mexico show up around October in the shops. You see the first Christmas decorations, the new trends and tendencies for the holidays . I always thought it was a bit too early for me, but after living here for a few years, I welcome these first signs. It puts me in a special celebratory mood.

Christmas is a big family celebration in Mexico, one we have had the good fortune of experiencing with our “adopted” Mexican family. This year we celebrated earlier as we are about to go home to Europe for the holidays. It was such a wonderful  gathering, with great food and mixed emotions as we will certainly miss everybody.

So after four and a half years in Mexico, I really thought I knew everything about Mexican Christmas traditions. This until I read about the Posadas Navidenas. I was so surprised and wondered why I had never heard of it before. When asked, my friends and Mexican family stared at me in disbelief. Where had I been hiding all these past Christmas, they wondered and how come I had never heard of it? I tried to think of excuses, never mind that no one had ever mentioned anything. I even had comments like, “well, you never asked!”. The truth is, among my acquaintances in Mexico almost no one organizes Posadas anymore. With the passing of the years this tradition started fading, particularly in the big cities. In the smaller pueblos it is still very much alive and people still get together to celebrate.

The Posadas were actually created in the 16th century by Spanish friars of the St. Agustine order. Recently arrived in the country after the conquest of Mexico by the Spaniards, their main goal was to propagate the faith and convert the indigenous population to Catholicism. At times they were very clever to adapt certain Pre-Hispanic festivities and convert them into Catholic religious celebrations.

This was the case with one of the most important Aztec celebrations, the December festivities in honor of the god Huitzilopochtli. He was the War and Sun god, as well as of human sacrifices and patron of Tenochtitlan which is now Mexico City. During the December celebrations the Aztecs decorated their homes with paper flags, there were ritual dances, songs, prayers and finally human sacrifices. They also fasted and ate very little. The exception being a giant statue of the god made with amaranth, seeds and honey which was divided into small pieces and shared among the whole population.

The St. Agustine friars adapted some of the rituals by changing the characters and transforming the festivities into a biblical performance and celebration. Instead of the sun god, Jesus became the light of the Aztec world. That is how the Posadas were born.

The Posadas start on 16th December and end on the 24th with the birth of Jesus. There are nine posadas that represent the nine months of pregnancy of the Virgin Mary. They also represent the journey of Mary and Joseph from Nazareth to Bethlehem and their search for shelter for the birth of Jesus. In the past, the Posada would be celebrated at a different home everyday. Now as times are hard, to save money, a whole street may come together and organize a Posada. Each neighbour will contribute with food, piñatas and entertainment according to their possibilities.

Posadas are done in the evening and they usually start with a religious procession. Then two groups are formed. One stays inside the designated home and the other knocks on the door to ask Posada (shelter). The head of the procession lights a candle or paper lampshade and then they knock on the door. Outside, they sing begging the people inside to give shelter to Mary and Joseph. Also singing, the ones inside initially refuse, telling them to move along. The group outside insists and again shelter is refused until the identity of Mary and Joseph is confirmed and shelter is finally granted. Once inside, everyone prays and gives grace. Food is then shared and the celebrations start. The children break piñatas filled with sweets and there is music and dancing to celebrate the birth of Jesus.

And this is the booklet you would get with all the prayers and songs to guide you through the 9 days of Posadas. 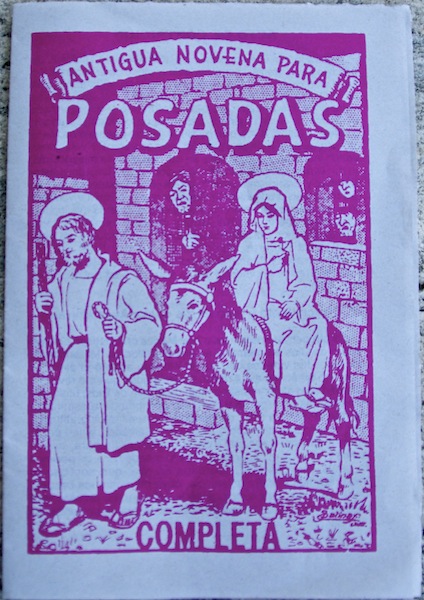 As I am leaving very soon and will not be here for the 16th anymore, I asked if anyone would know of an early Posada so that we could still experience it. Chance had it we were invited by some friends of our Mexican cousins to participate in a Posada. It was a Posada for children during the day. It was such a lovely celebration and I was so grateful my daughter could participate and have such a great time.

So when we arrived the Piñatas were already strategically set for the children. 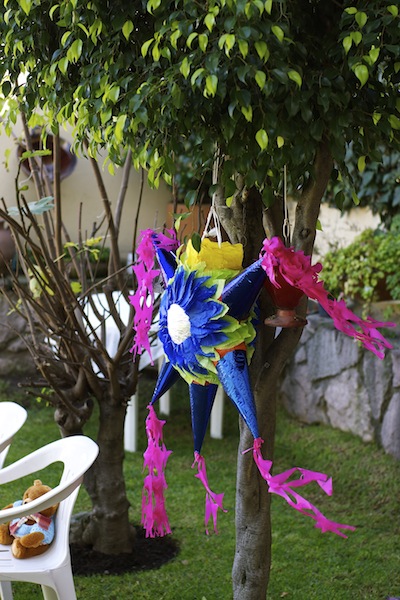 It is tradition for the children to dress up, some like shepherds, others like Mary and Joseph. 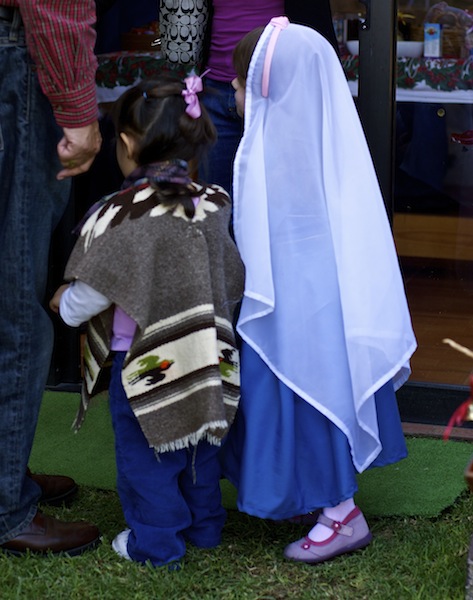 And also play instruments during the singing when you request Posada. 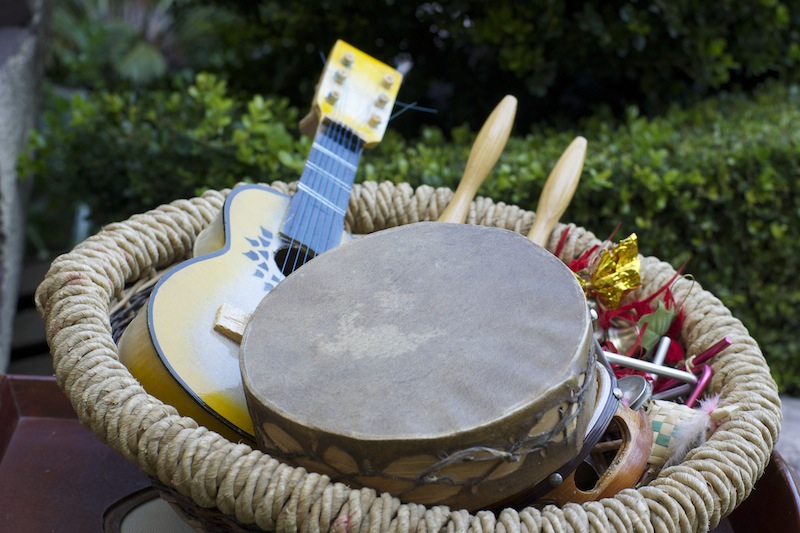 When we finished singing (I was terrible!) it was time for the children to fill the piñatas with sweets 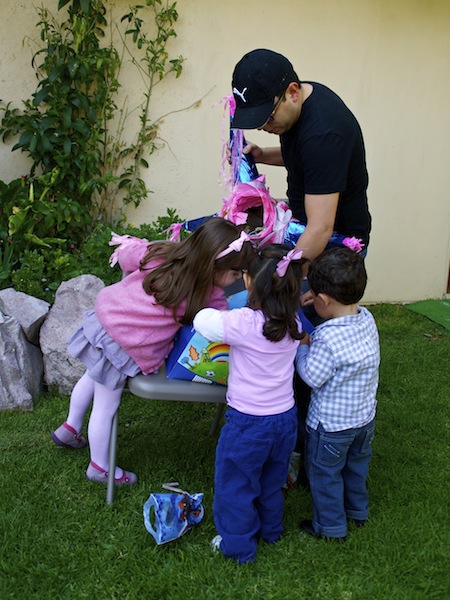 And have a go at it! 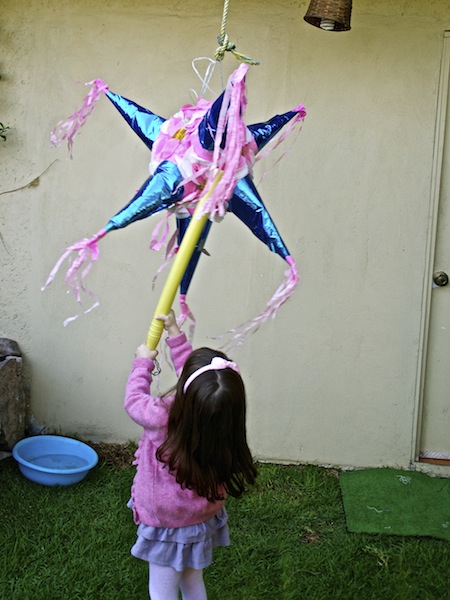 Once broken you try to get as many sweets as you can! 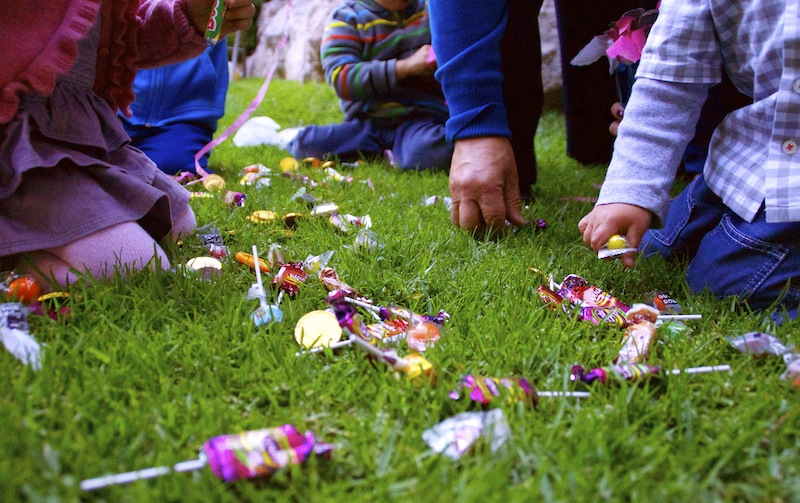 Children are happy and learn about a tradition that has been passed from generation to generation. I’m glad we could participate in such a special celebration, one more to remember when our life will once more force us to leave …