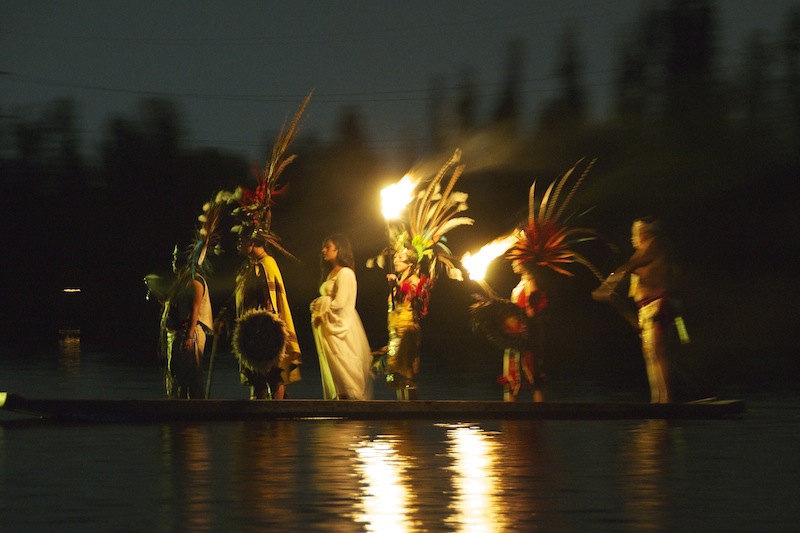 Twenty years ago the “La Llorona” (the crying woman) play was created in Xochimilco with the objective of promoting the natural beauty of what is called the Venice of Mexico. In particular of the Cuemanco “embarcadero” which is less known but possesses a peaceful, natural beauty worth visiting. It was also meant to rescue ancient cultural traditions and through them to tell the sad story of the end of the “Mexicas” or Aztecs way of life. Not only the loss of their capital Tenochtitlán (now Mexico City) and the massacre that followed but also the Spaniards attempt to crush their beliefs and traditions after their conquest in the 16th century.

The water canals of Xochimilco with their Chinampas (Aztec created, man made agricultural small islands in the shallow beds of the lakes. They could yield up to 4 crops a year and were divided by water canals where small canoes navigated) go back to Pre-Hispanic times. They make therefore the perfect setting for this theatre piece played in the evening, entirely in the open air at the mercy of the elements. You are surrounded by nature and its sounds which provide an extra special dreamy atmosphere during the performance. “La Llorona” is only played once a year during the months of October and November (to coincide with the celebrations of the Day of the Dead in Mexico) which makes it a unique event, one I highly recommend if you happen to be in Mexico when it takes place.

You should arrive at least an hour earlier to hire a boat and have plenty of time to enjoy the canals before the performance. Usually boats can take up to 20 people. 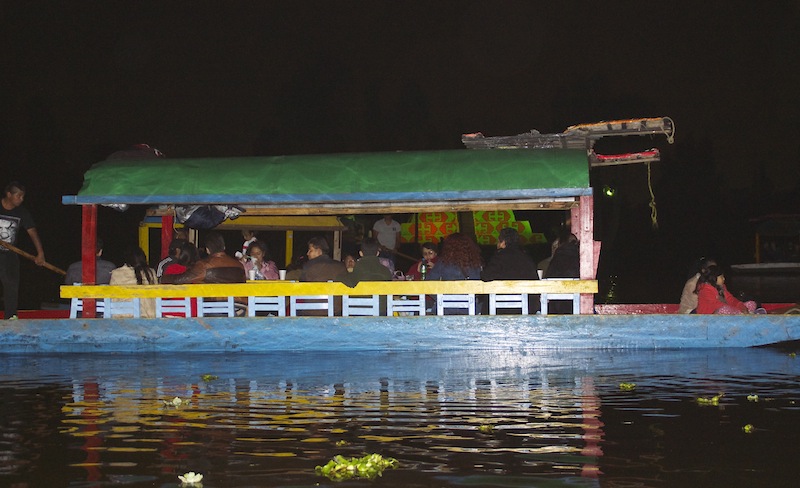 As is usual in Xochimilco, you do not need to worry about dinner. There are always kitchen boats around that offer a variety of traditional Mexican snacks and drinks. It is all home made, it comforts you from the cold and it is part of the experience. 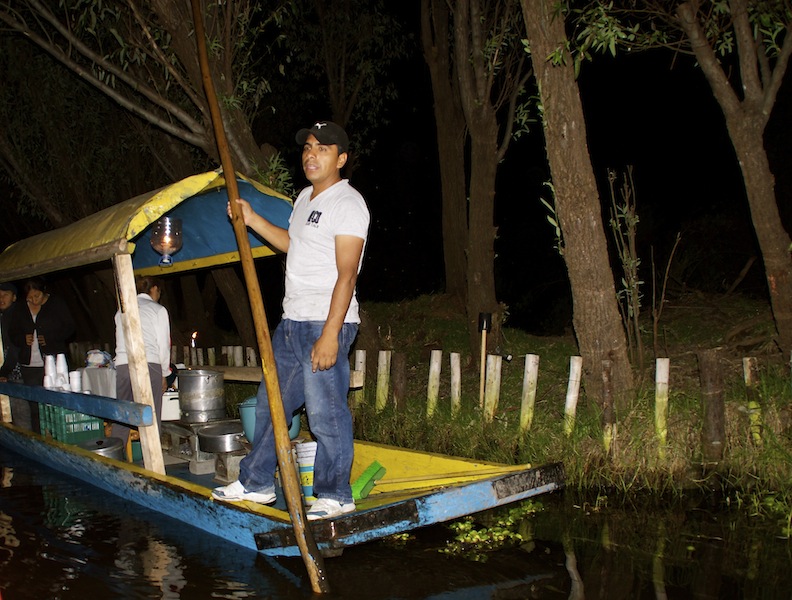 You are taken slowly through the canals until you arrive at the island where the performance will take place. All the boats will then positioned themselves around the stage so that everyone can watch the play from the boats. 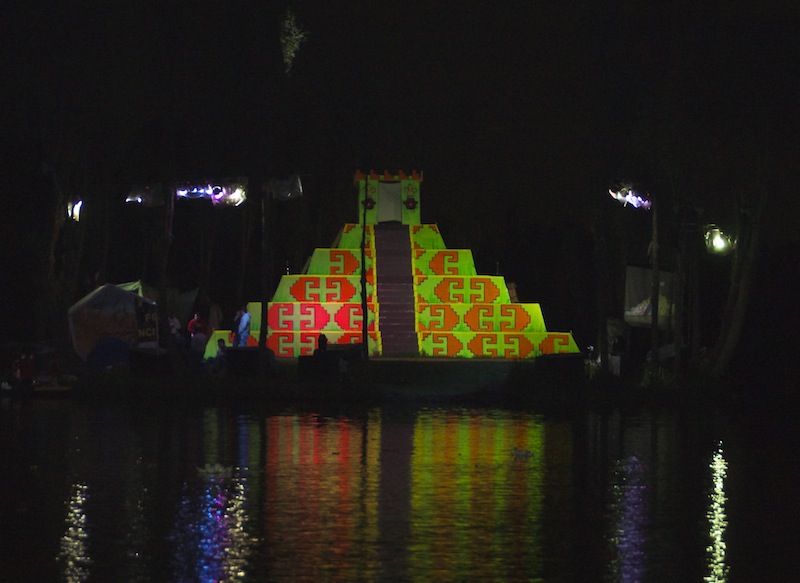 This year to commemorate the 20 years, there was a total renewal in the concept and presentation of the play. It took 5 months of rehearsals under the direction of Norma Espinoza. The music pieces were enriched by a greater amount of Pre-Hispanic instruments used which took us back in time to the beautiful ancient melodies of the past. For the first time, to showcase the historical trajectory of music in Mexico, instruments like the guitar, arp, violin and melodies brought by the Spaniards were also present.

The choreography was revived by a choreographer from Belgium who brought a new contemporary approach to the dance sequences.

The storyline was also changed. The role of a narrator was eliminated since the performance became much more cohesive and explicit. The “La Llorona” character was also altered. From an indigenous innocent young woman that falls in love with a Spanish officer, she is now Ayauhtli, a warrior woman. At the beginning of the play, she predicts something very bad is about to happen that will change their world forever. When the Spaniards arrive, she is then forced to become the wife of a Spanish captain and becomes pregnant. She despises him and can’t stand the sight of him. When he tells her that their unborn child will be taken to Spain after birth to be raised properly by nuns, she takes the most difficult decision of her life. She decides that her child will never leave his land and his people and ends up killing herself and the baby. Before her death she promises revenge against the Spaniards for forcing her and her child to die and for all the people they had already killed in the Templo Maior (you can visit the ruins next to the cathedral in Mexico city). “La Llorona” is then seen as a ghost crying for her lost child. My child! My child! She cries into the night!

There are many versions of the “La Llorona” but the conclusion is always the same, a woman that was let down reacts in the most horrible way by killing herself and her child or children. She is then forced to roam the earth as a ghost always with her chilling cries, lamenting the loss of her children. Emotionally, it is a very hard part to play so I admired the strong performance of  the actress and singer that gives life to “La Llorona”, Nayeli Cortés. I also enjoyed the performance of the rest of the cast and musicians who are great. The Pre-Hispanic music pieces were exceptional.

And the play starts in this dreamy atmosphere 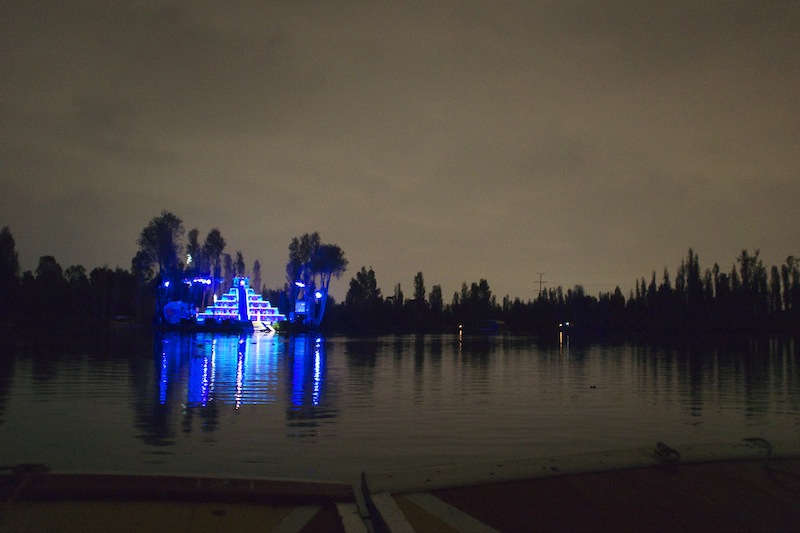 There is a bad feeling about the imminent arrival of the Spaniards, “La Llorona” in particular warns of the possible dangers to come. 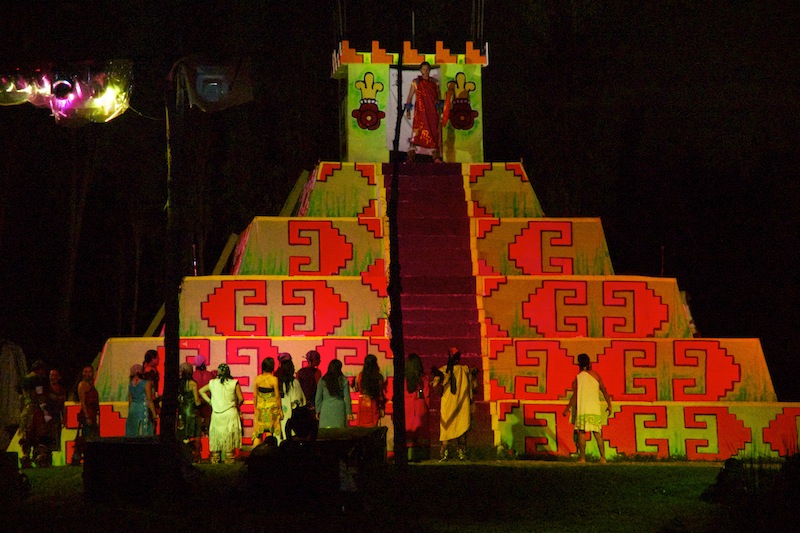 The Spaniards arrive with a bang 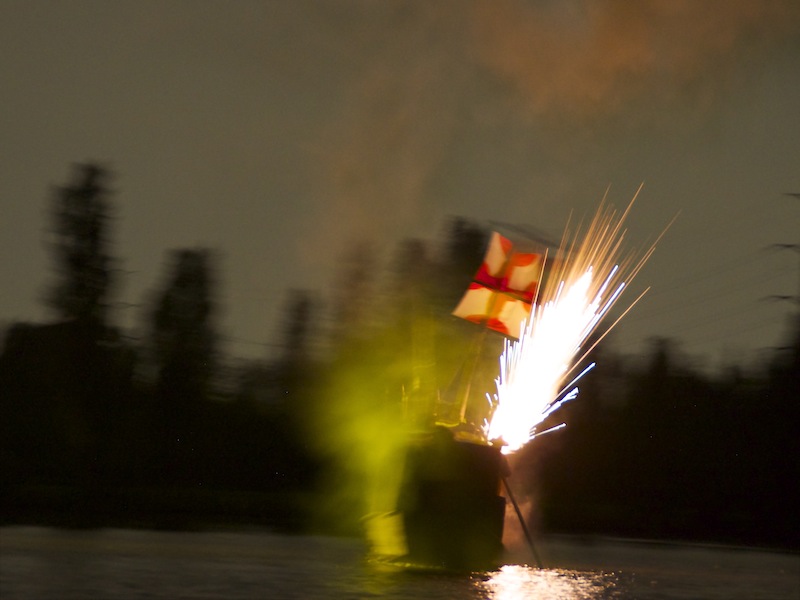 The Spaniards take control of the territory and arrest Montezuma 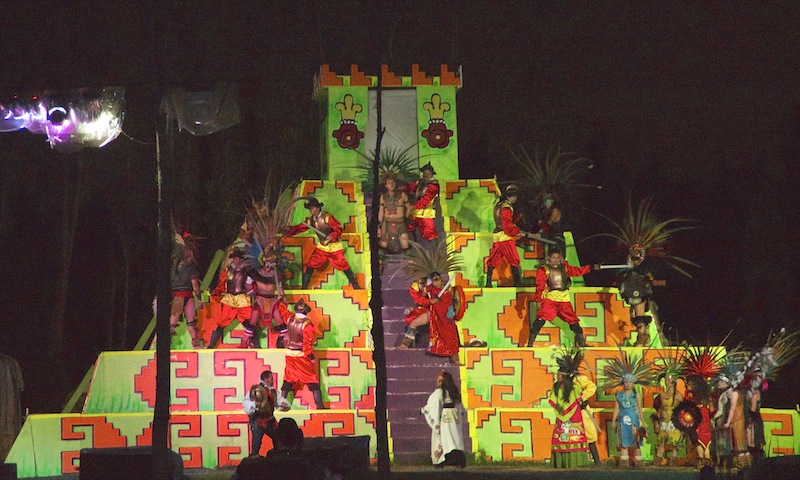 Death approaches “la Llorona” who has made up her mind… 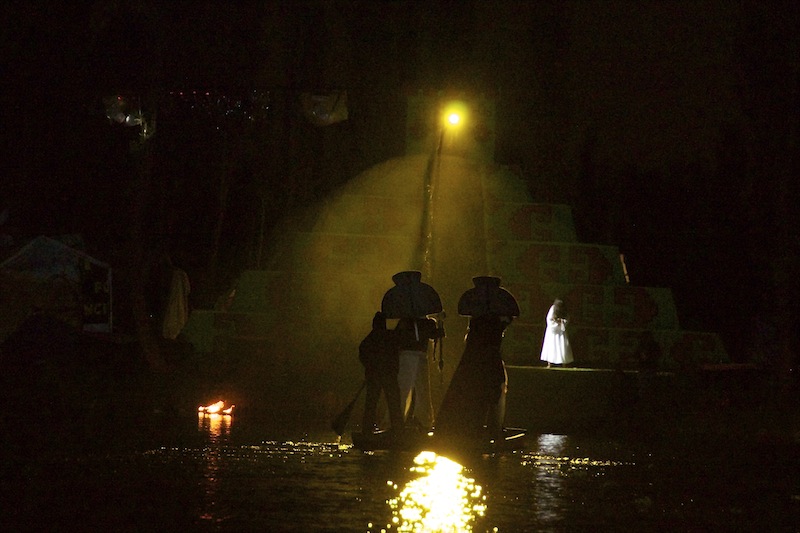 “La Llorona” prepares herself for death 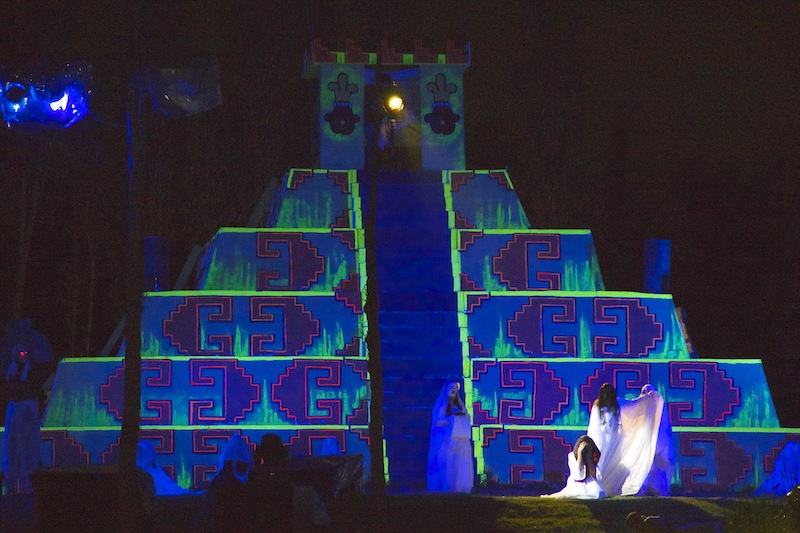 Already as an errant spirit she gives the most heartfelt chilling cries, my child! my child! 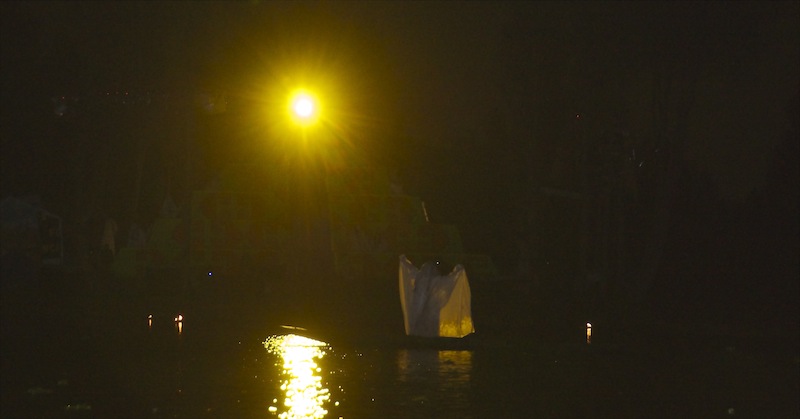 The cast at the end of the performance 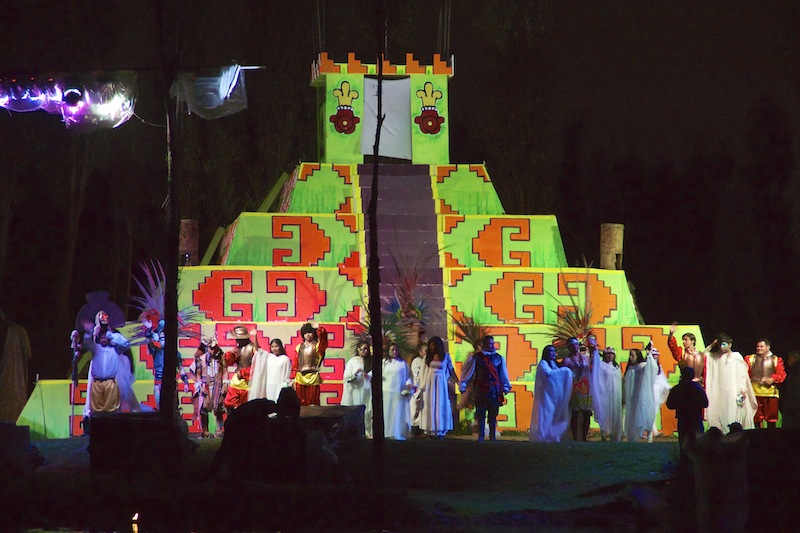 And here is “La Llorona” surrounded by death and another cast member. We were very grateful for the opportunity to briefly meet the cast and congratulate them on their performance. 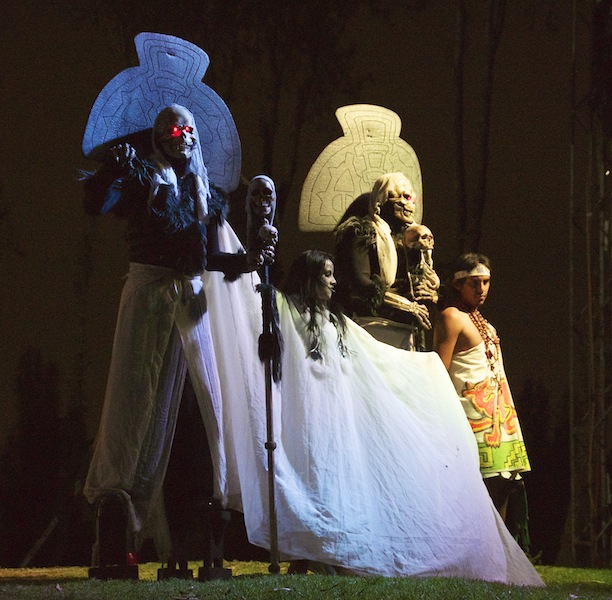 I have to thank the Secretary of Tourism of the Districto Federal, Lic. Miguel Marqués; the Director General of Tourism Services in the Districto Federal, Lic. Filipe Castillo and the  Delegation of Xochimilco for organizing such a wonderful event for all the international guests present. Everyone appreciated and were delighted to participate in the special 20th anniversary of the “La Llorona” play.

The play is performed in the evenings on fridays, saturdays and sundays during the months of October and November. The duration is 90 minutes and you have to admire the cast and musicians who will perform under the most trying atmospheric conditions, like extreme cold and sometimes rain. You are advised to take very warm clothes as it can become quite chilly in the canals and protect yourself with mosquito spray. It was so cold during our performance that the mosquitos failed to make an appearance. It was a unique experience, one I’m grateful I got to witness.

I leave you with the beautiful song of the “La Llorona” performed in Nahuatl, the ancient dialect which they are trying to preserve and is also used several times during the play:

If you want to see how the Xochimilco canals look during the day, you may also like: