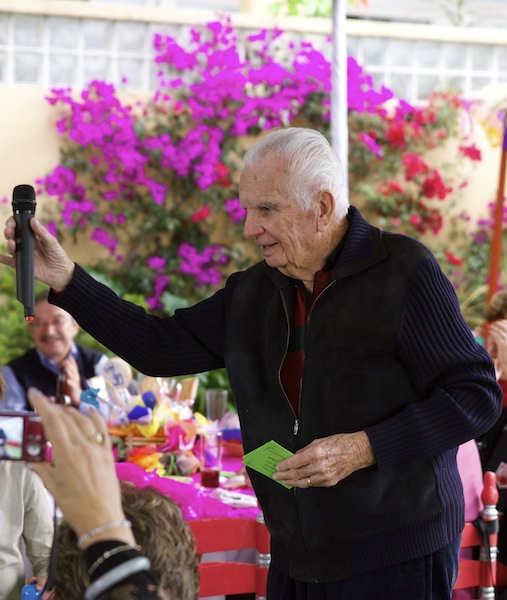 If you read my previous posts where I mention the family I found in Mexico (With our Mexican Family in Acapulco; The Venice of Mexico – Celebrating 33 years of Marriage in Xochimilco), you know by now how we feel about them. When you live most of your life abroad, away from your family and your country, finding people who give you such loving friendship and mean the world to you is priceless.

Celebrating Luigi’s (the owner of my house) 90th birthday was always going to be special for us. I cannot imagine living for that long. Maybe it is my fatalistic Portuguese soul or just witnessing every day the unpredictability of the world we live in. I am however immensely grateful for being here, for my family and for having been given the chance to travel and explore this amazing planet of ours. I’m certainly very thankful for having come to Mexico and for the wonderful experiences we’ve had and the special people we’ve met.

If I were to reach 90 though, I would want to be just like Luigi. I don’t think I ever met someone with such an incredible “joie de vivre”, his contagious positive stance on life, his resistance and energy. A descendent of europeans, with French and Italian blood mixed in an interesting equation and Mexican by birth, Luigi has witnessed and lived some of the major events of the 20th century.

World War II that put him and his family in harms way with the bombardments in Rome where they were living at the time. Two major earthquakes, the first in 1957, a year after he had arrived back in Mexico City to make his living and the second in 1985. However, he also witnessed the major achievements of mankind in medicine, science, transport and communications. He told me how when his family went back to Europe from Mexico, when he was just 18 months, it had taken them at least 20 days to arrive by boat. To be able to travel in less than half a day by plane, to be able to communicate by mobile phone and at a click of a button, these are all great examples how resourceful our species is and how far we have come. If you ask Luigi if he is more European or more Mexican, he will tell you both without hesitation.

With his sharp sense of humor and his loving teasing, he has made me laugh countless times and I don’t think he even realizes how much strength he has given me in certain difficult moments in my life.

He has been a big support for me and my family so many times, along with his beautiful wife Carmen. I don’t think his journey would have been so special without his companion of 33 years. Carmen is an essential part of this wonderful partnership. She is a strong, willful woman who has always managed to overcome the trying moments in her life with grace and determination. I suspect her eternal optimism, her sense of humor and her witty smile had something to do with it.

It has been freezing in Mexico City. I have lost count by now how many cold fronts we’ve had and the rainy season is stubbornly lingering still. It did not seem very promising for a party in the garden at all. Fortunately, nature and the elements conspired to allow us to celebrate Luigi’s life. The sun came out to provide a bit of warmth and light up the party. The vibrant colours of the Mexican theme gave the party a lively, happy atmosphere. 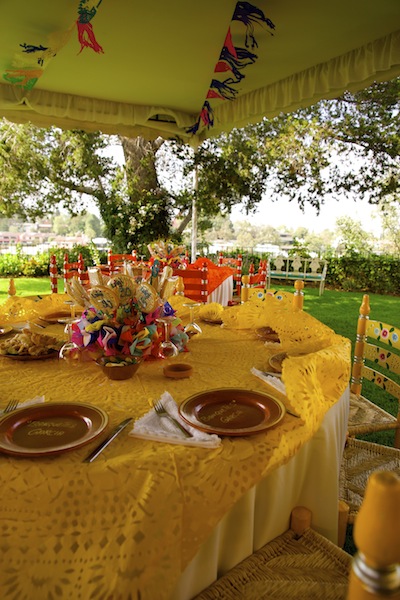 I loved the centerpieces as well, beautiful baskets with cookies, an intricate work from Carmen’s niece and sister in law who have a bakery in Aguascalientes. 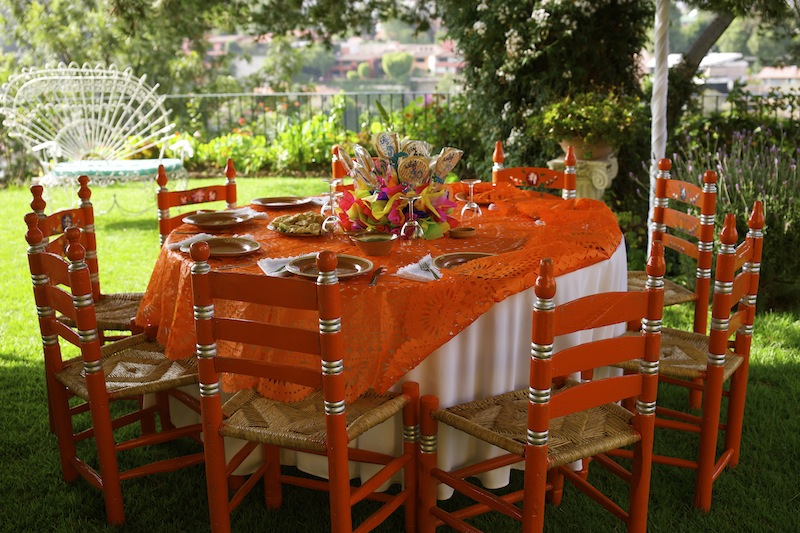 The wonderful buffet offered favourite traditional Mexican dishes and was being prepared fresh before our eyes. 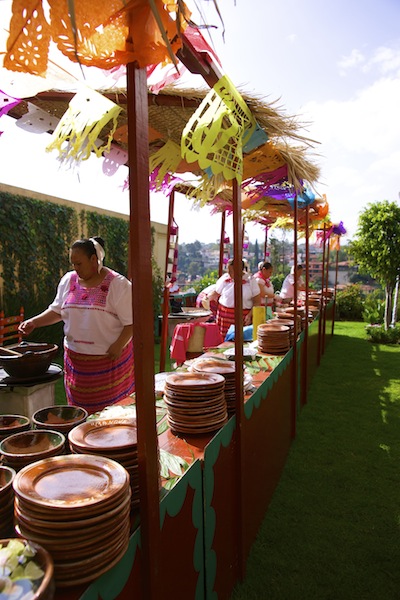 As an appetizer we had the famous chicharrón which you can see below on the left of the picture. It consists of fried pork rinds that are very crispy and are usually served with a few drops of lime. 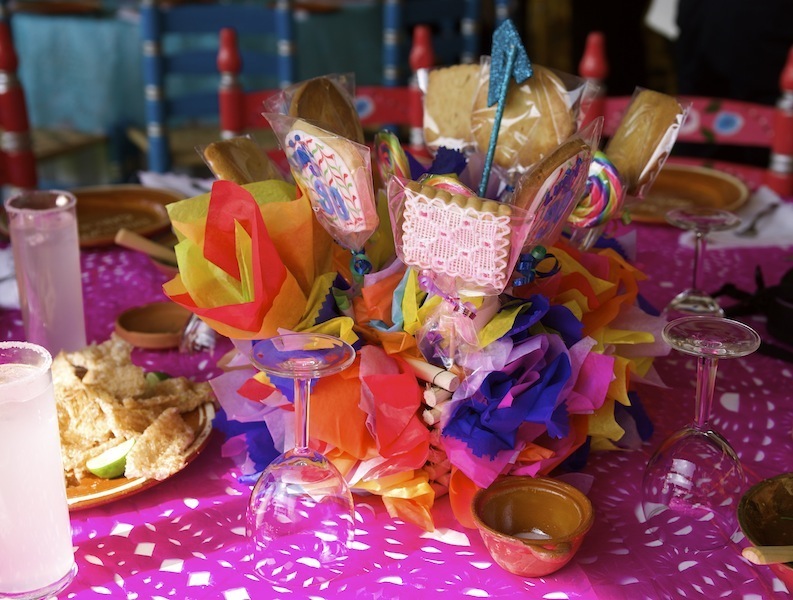 Then we had a variety of vegetarian and meat quesadillas 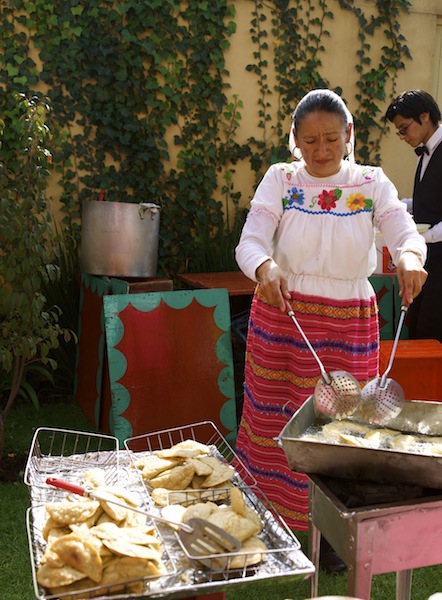 Followed by delicious dishes such as Pozole which is a thick, rich soup that comes from Pre-hispanic times. The soup usually consists of fresh corn spiced with chiles to which you add other ingredients like pork, beef or chicken and different vegetables. There are as well all vegetarian versions. They also served “mole” with chicken (there are different varieties of moles or thick, rich sauces in Mexico depending on the region. Oaxaca for example has 7 different moles. The “mole negro” that was served, besides the different chiles and spices, had also chocolate as a main ingredient ) and “carnitas” (meat that is braised for a long time until soft, then roasted in the oven to get crispy. It is then shredded into small pieces) with tacos.

To drink, besides the obvious, there were also traditional Mexican drinks. From left to right, tamarind water, horchata which is usually made with rice, cinnamon, vanilla and a bit of sugar. There are other versions that also take melon seeds. The last one, my favorite, was the hibiscus water. Behind, you can see them heating the “cafe de olla”, a Mexican spiced coffee. 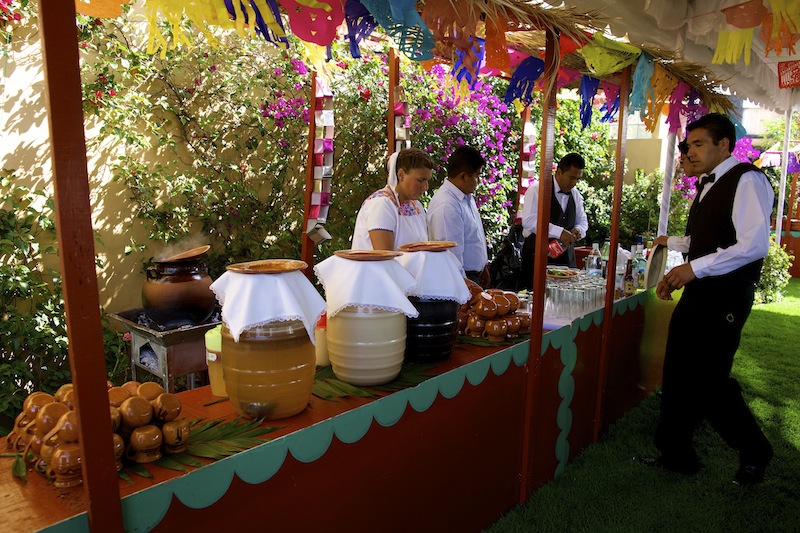 At the end of this Mexican gastronomic tour and to satisfy our sweet desires, there were baskets with an assortment of Mexican sweets.

It was a lovely, fun party and it ended perfectly with Luigi’s heartfelt speech. I knew at some point that he would make me cry. When he mentioned us and my daughter, I was overwhelmed, touched and heartbroken. Next summer we will have to say goodbye to them and to Mexico and I still haven’t figured out how I will be able to do that…

May Luigi have many more years to grace us with his presence and to teach us how to live life to the fullest!