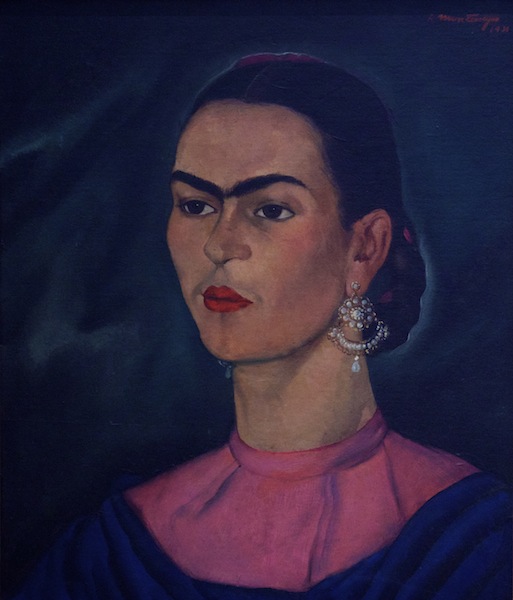 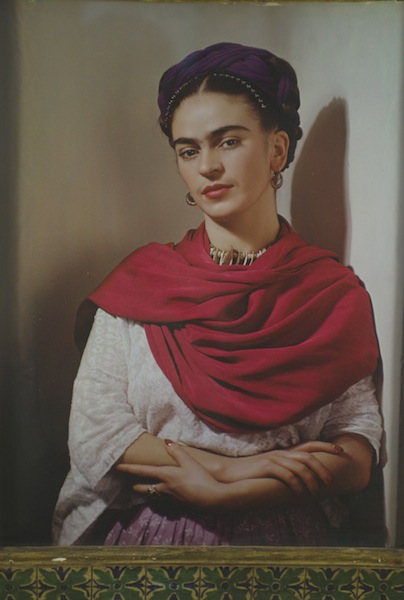 Frida Kahlo was one of the most remarkable and controversial female artists in the first half of the 20th century. Her paintings are known for being provocative and audacious. Before Frida, the Western art world was not familiarized with images of labors and abortions. It was not accustomed to auto portraits showing internal organs or travesty characters.

The first time I saw her paintings live was in 2006 at an exhibition in Lisbon. At that time I was convinced I would never have children. I wasn’t unhappy, there were a lot of positive things in my life but deep inside there was a sadness that lured and crept in from time to time.

Her imagery touched me deeply and struck a cord inside me. In particular the paintings that showed her sense of helplessness for not being able to fulfill her desire to have children. Also the ones that showed her physical pain after all the operations she had to endure to try correct her back ailments.

Her auto portraits are very famous. More than any other artist I know, through them you can get a glimpse of the woman she was. You recognize the innocent years, the passionate phase, the deep suffering moments and then the knowledgeable, mature phase. She often said that her paintings reflected her state of mind, her feelings and her behaviour towards life.

In 2004 museum staff discovered the contents of her closet, hidden in the bathroom of her house “La casa Azul” (now the Frida Kahlo museum). 300 pieces of her wardrobe and personal belongings came to light after being kept away for 50 years at the request of her husband, the famous painter Diego Rivera.

Her traditional and not so traditional clothing, jewelry, medicine and orthopedic devices were disclosed for the first time. As they reflect so much of her identity and the development of her style, the museum decided to do a special exhibition.

It is called  “Appearances can be deceiving: Frida Kahlo’s Wardrobe”. It started in fall 2012 and will end in January 2014. I highly recommend it if you are visiting Mexico and want to know more about Frida Kahlo.

Two unfortunate events influenced Frida’s creative sense of fashion. When she was 6 years old, Frida contracted Polio. This resulted in the atrophy of her right leg for life which made Frida give preference to long skirts. At 18 she almost lost her life in a terrible accident. She was returning from school when an electric tramway hit the bus she was riding in. The consequences of that accident were unimaginable. A metal handrail went straight through her left side of the body. It pierced her abdomen and uterus preventing her from ever having children. She also broke her collarbone, her spinal column and right foot. This accident was the beginning of her constant physical ailments and deterioration which led to the amputation of her right leg in 1953 at the age of 46. The effects of both accidents haunted Frida for the rest of her life.

When she lost her leg she did this drawing in her diary. It probably represents votive offerings, very common here in Mexico and other catholic countries like mine. These amulets, in wax usually, represent different parts of the body, depending on your ailment. They are put in the church altars of saints and are either to give thanks or ask for the recovery of a loved one. 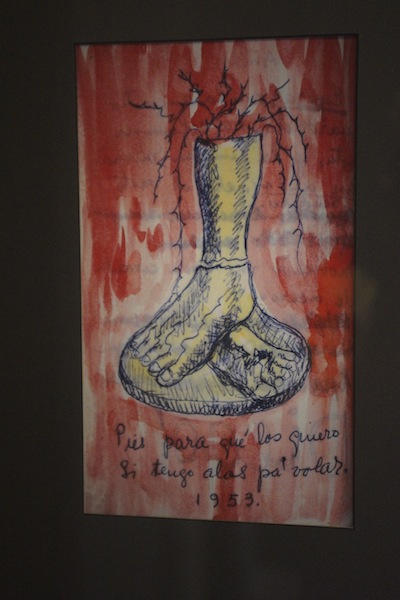 Below the feet, there is a sentence which shows Frida’s resilient spirit. It says “Why do I need feet, if I have wings to fly”.

How well she adapted to the trying circumstances, the boot was painted by her and it portrays Frida’s fashion creativity at its best. 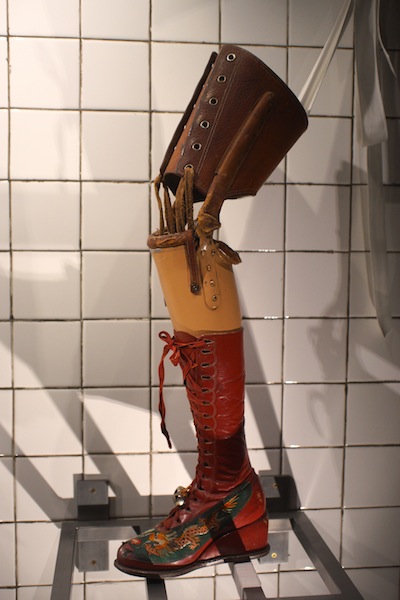 And another detail of her work 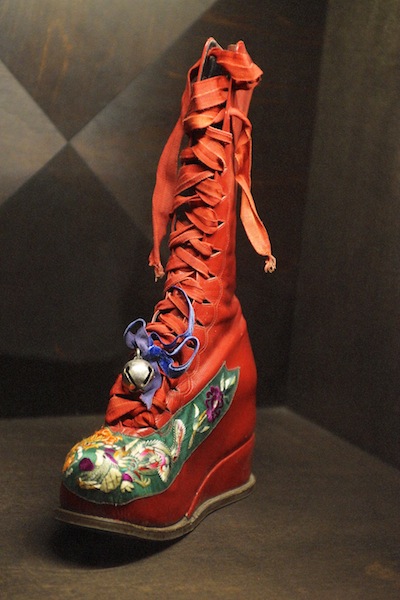 Her increasing disability and suffering confined her for long periods to either a wheelchair or to her bed. Due to her back problems she was often bound in plaster corsets that she used to decorate beautifully and combined with her long skirts. 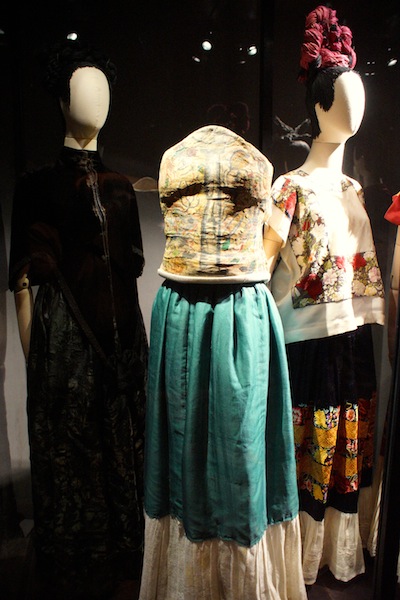 Frida, the daughter of a German and a Mexican, also embraced her mother’s cultural heritage. She wore often the Tehuana dress from the city of Tehuantepec in the state of Oaxaca. This is where her mother’s family originated from. She wore it as a cultural and political statement. The city had a reputation of being a matriarchal society where women held the real power. The Tehuana dress was therefore a strong symbol of female power and independence. 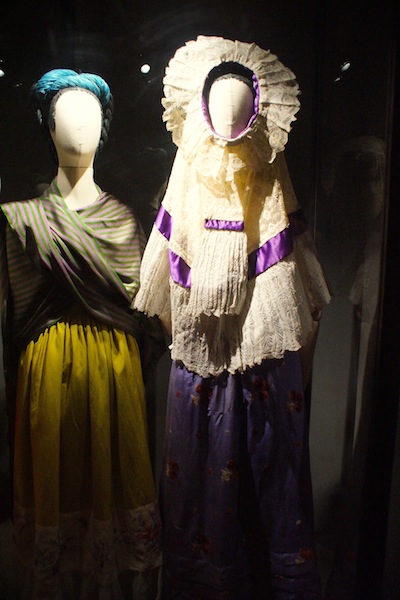 Frida’s influence in the fashion world became a reality when, in the fall of 1937 Vogue Magazine featured an article about her. Later, in 1939 she had her first art exhibition in Paris and her Tehuana dress became a a great sensation among the european elites. 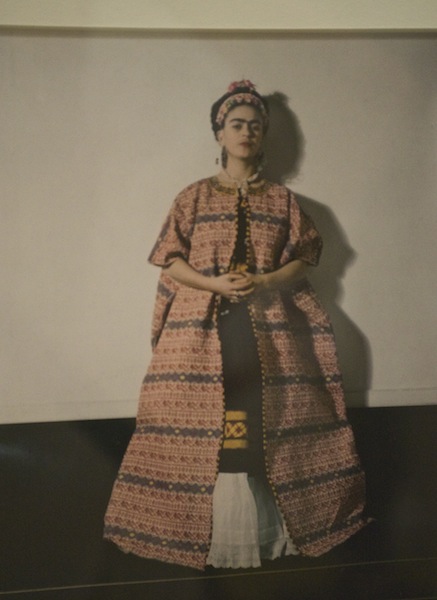 Frida also influenced contemporary designers like Jean Paul Gaultier who in his 1998 Spring-Summer collection based the collection on her style, even calling it “Hommage a Frida Kahlo”. The designer Ricardo Tisci also payed tribute to Frida with his couture collection Autumn-Winter 2010 for Givency. 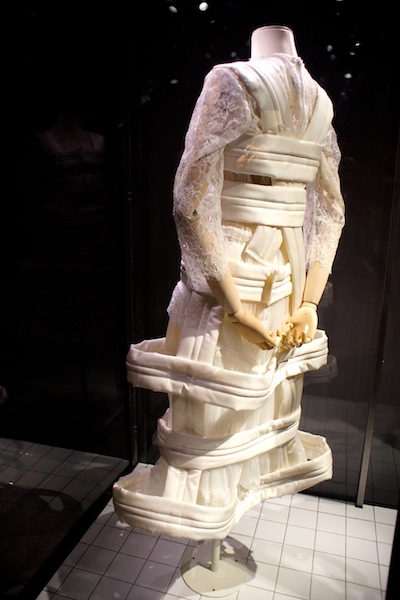 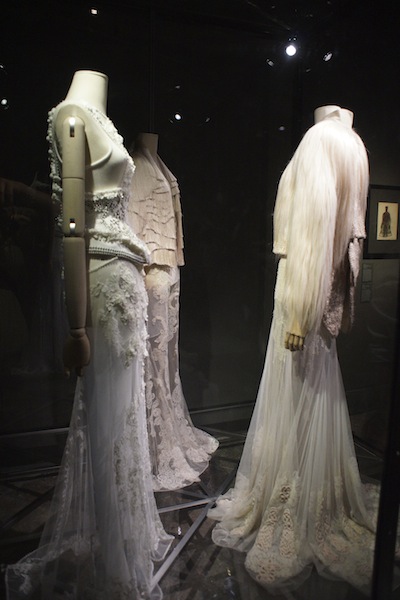 There would be so much more to write about Frida Kahlo. The artist and dreamer Frida. The lover, bisexual, betrayer and betrayed so many times by her husband Frida. The martyr, saint but strong willed and difficult to live with Frida. The intelligent and highly cultured Frida. The political, opinionated and provocative Frida. The overcome by sadness and suffering but at the same time full of life and joie de vivre Frida.

A long time ago, an Ancient History Professor in my university told us that before reading any recent, even if well researched book, we should always let the ancients speak for themselves through their written testimonies. I couldn’t agree more. If you want to know more about Frida Kahlo, then you should start by letting her speak for herself. I would start with her diary and her letters. That will give you a more intimate look of the woman she was and will make you appreciate better her artistic expressions.

I hope you can come to Mexico City and see this wonderful exhibition. Take your time in the house as well, enjoy the atmosphere and her paintings.

I leave you with a view of her studio… 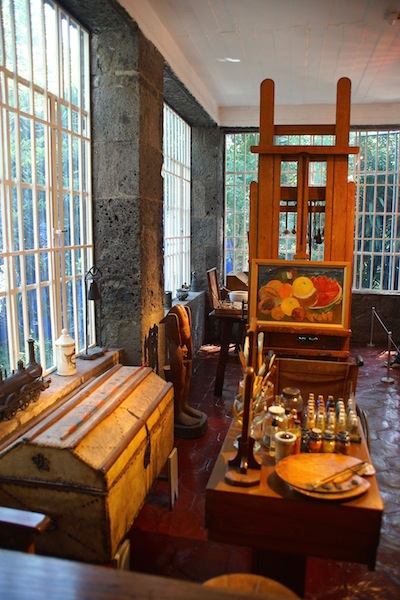