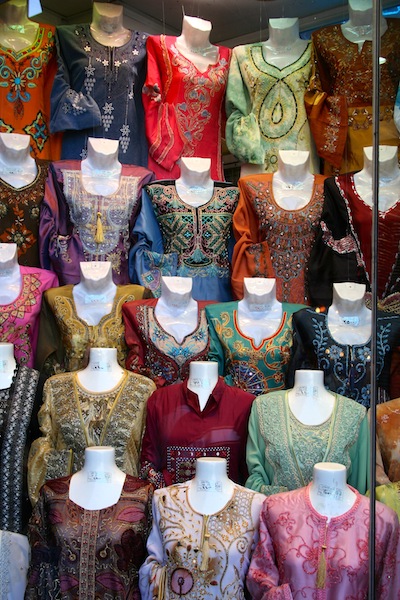 Hunting for Treasures at the Souk in Damascus 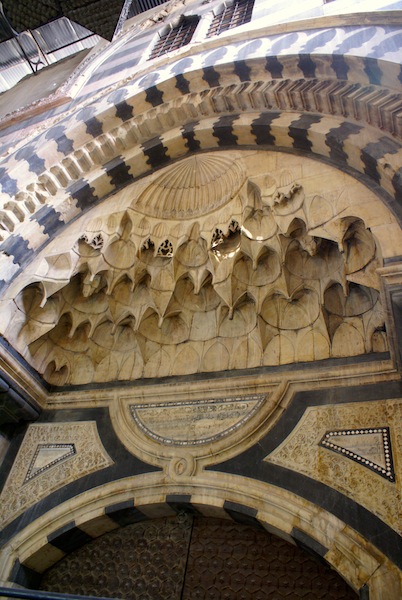 “For me, a journey to Damascus is an amazing hunt from beginning to end, a slice through layers of history in search of treasure.”

― Tahir Shah, Travels With Myself

I couldn’t agree more. That is exactly how I felt when I entered the market or souk in Damascus for the first time. In a week when another double suicide attack in Damascus took more lives and left a trace of destruction, I can’t help feeling sad. I often think if instead of layers of history, we won’t be going through layers of rubble to find the treasure again.

When we arrived in Damascus by car from Saudi Arabia a few years ago, we were overwhelmed. Soon we got completely lost! The result of the “creative” Syrian way of driving mixed with few recognizable traffic signs. It didn’t help that it was hard to find someone with whom we could communicate in English. Still, they were always friendly and tried to help us as well as they could. When we finally found the hotel and walked to the market for the first time, we were enchanted.

I still remember the wonderful food we had at a local restaurant where we were the only foreigners present. We could observe the Syrians around us in a fresh light. The food was a delightful discovery after we enlisted the waiter’s advice on the local traditional dishes.

I always feel thrilled whenever I visit a market but entering the souk Al-Hamadiyah for the first time really touched me. It was like a sociology study showing Syrians from all walks of life. There were young and old, some more westernized, some more traditional. You could also observe different levels of faith by their attire and their behaviour. There was a bustling energy and activity everywhere. Above all else, there was a positive, happy  feeling in the air hard to explain. 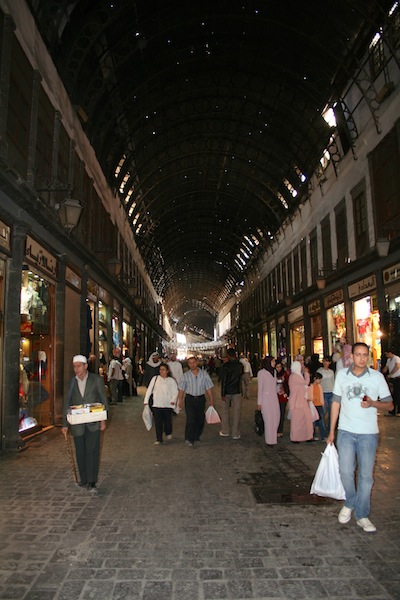 Our first stop was for dessert at the famous ice cream parlour Backdash. It was created by Mohammad Hamdi Bakdash and opened its doors in 1895. It is considered one of the oldest manufacturers of Arab ice cream in the world. The business is still in the hands of the Bakdash family. It is nice to know that in spite of the conflict, the shop is still open in the souk. One of the sons and manager, Samir, (whom I remembered seeing in the parlor) explained to the BBC why in spite of the difficulties in finding raw materials, they are still going strong. He says they put their smiles and hope in the ice cream they sell. The video shows the wonderful ice cream parlour and the traditional beating of the ice cream.

You can see the BBC piece on how Backdash and other Syrians are coping with the difficult circumstances here .

We loved the ice cream! It was creamy and smooth. The sweet flavour together with the pistachio was delicious. I wish I had photos to show what we chose but we were so busy enjoying the ice cream that the though of taking pictures never crossed our mind!

I can, however, show other shops that presented a diversity of products for every taste. Like these musical instruments 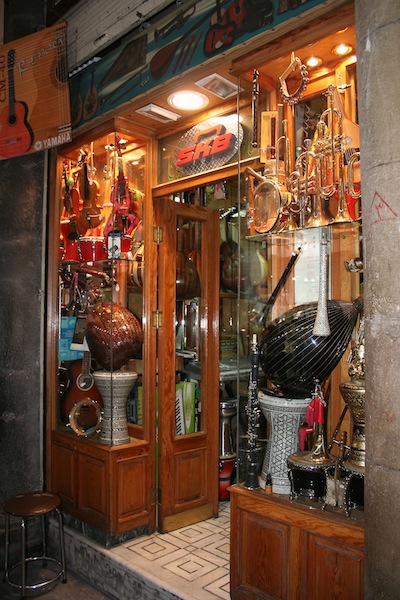 Or all these scarf models to choose from 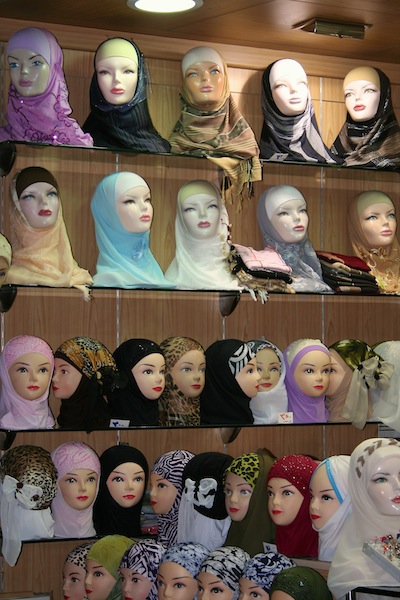 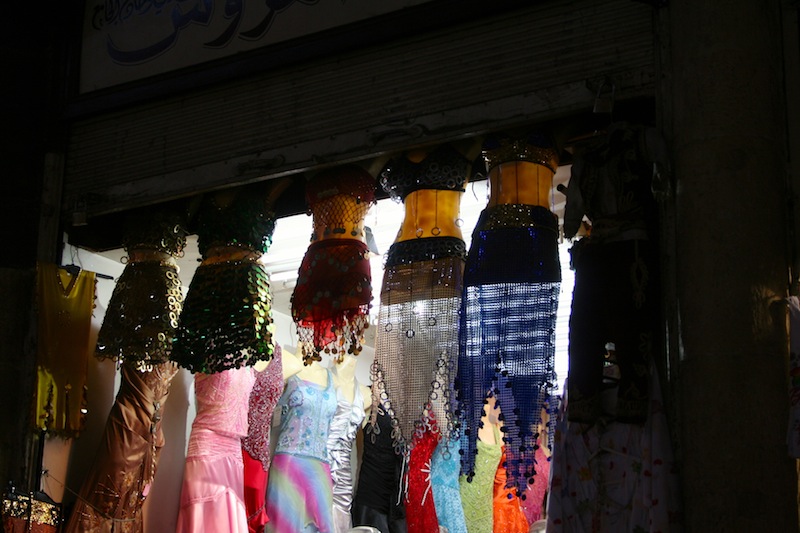 Or even more intimate ones 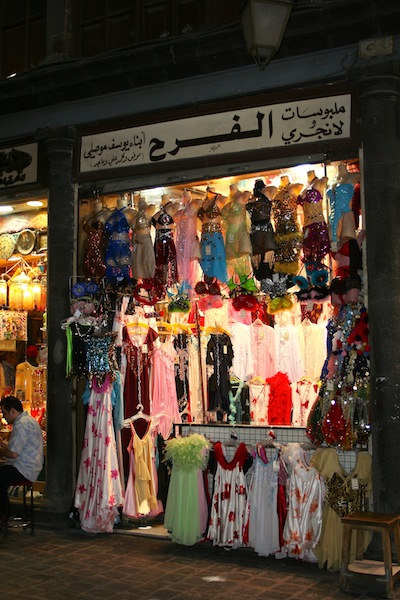 Syrians are also known for the beautiful wooden, intricate boxes and you can never have enough talismans to protect you from the evil eye!

We spent days exploring the souk. After Damascus we went to visit the rest of the country.  The plan was then to spend a few more days in Jordan before returning to Saudi Arabia. However, we loved Syria so much that we decided to skip Jordan and stay in Damascus longer. That gave us the opportunity to further explore the souk, talk with local people and look for special pieces. Most people were extremely welcoming, always telling us how they resented being portrayed as part of the axis of evil by Bush. They told us they were basically nice people that didn’t deserve to be blamed for their government’s policies. We felt that Syrians in general were really nice and kind people.

We met young artists who had small shops in the souk. Among others, I talked with a talented young painter for some time. We discussed her aspirations, work and hope for the future. I couldn’t resist buying one of her paintings. How appropriate that it portrays sufi dervishes whirling. Sufism represents the most spiritual side of Islam. Turning from right to left around the heart, the dervish gets into perfect communion with God and embraces all humanity with love.

With everything that is going on in Syria at the moment, I wish the Sufi message of love would be practiced more… 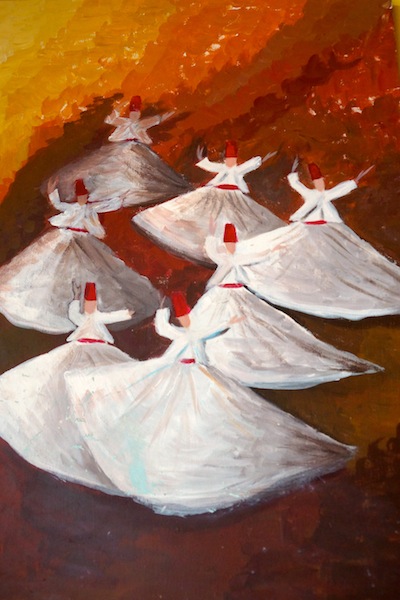 The architecture of the souk and the surrounding streets is also remarkable. The main street dates back to Roman times but the present layout of the souk was planned in the 19th century. 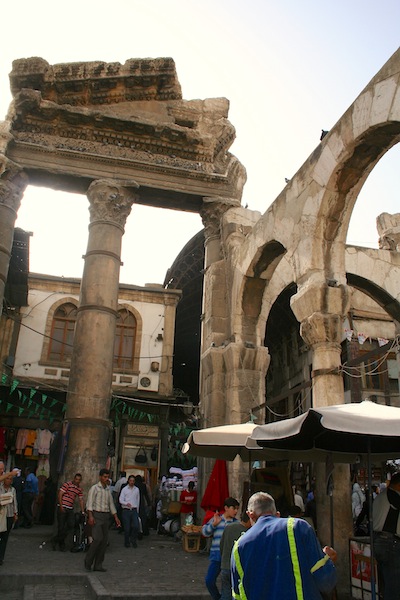 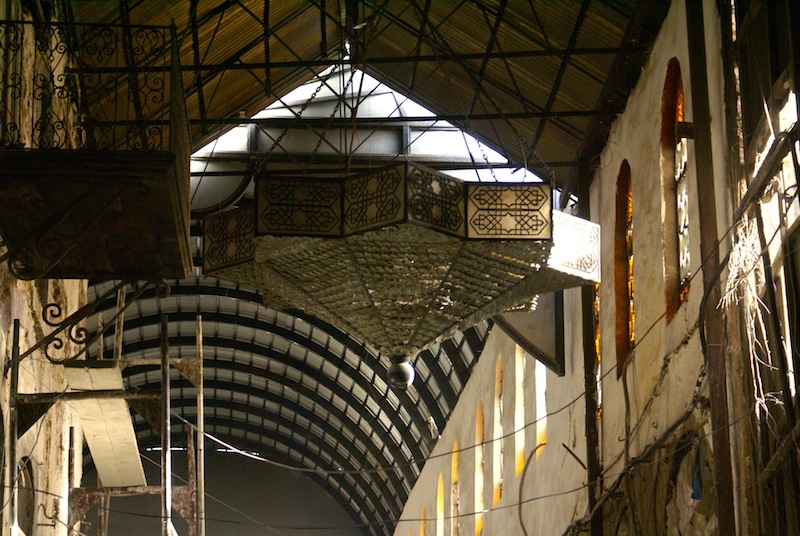 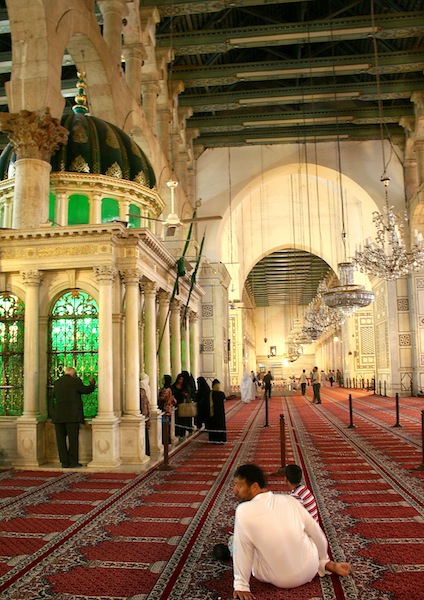 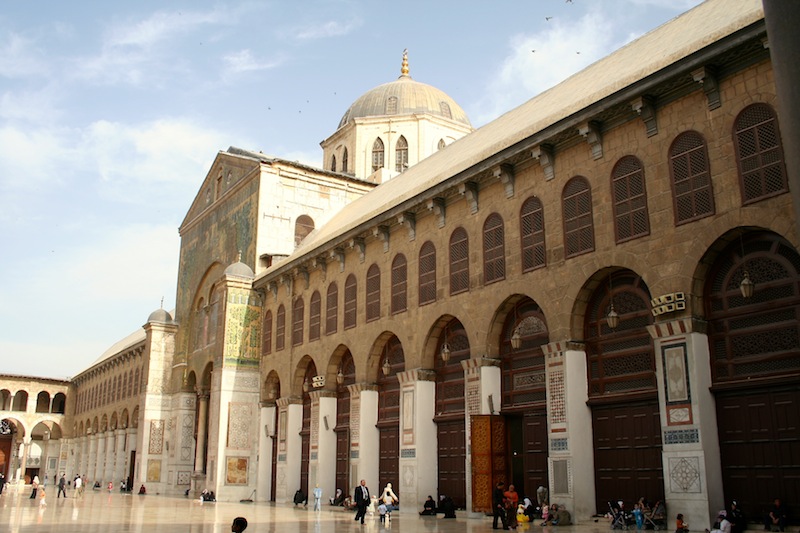 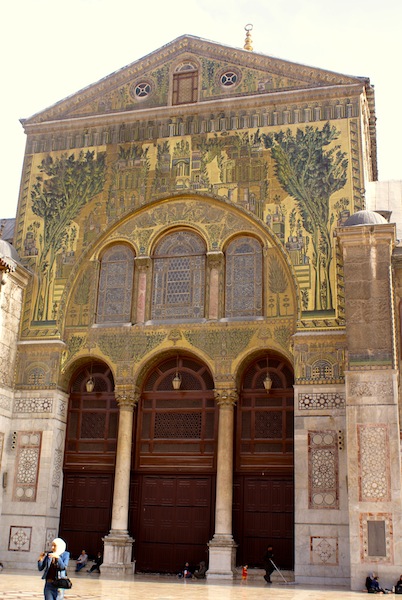 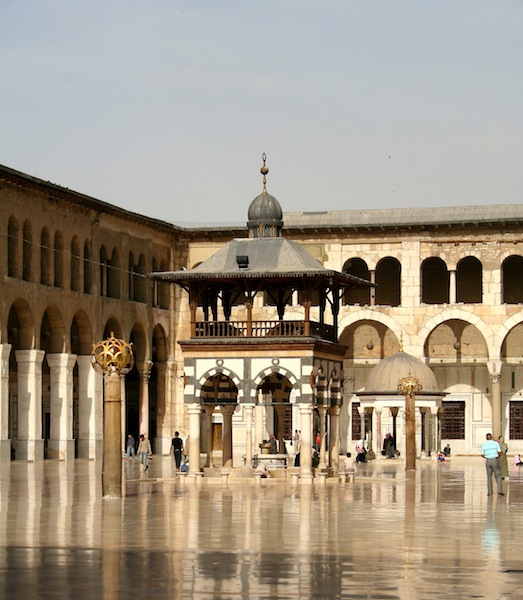 After a full day exploring the souk, we sat in the square outside the mosque and waited for the sunset. It was a special moment watching the sun come down, seeing the people go by, making their last purchases in the market or coming out of the mosque after praying. 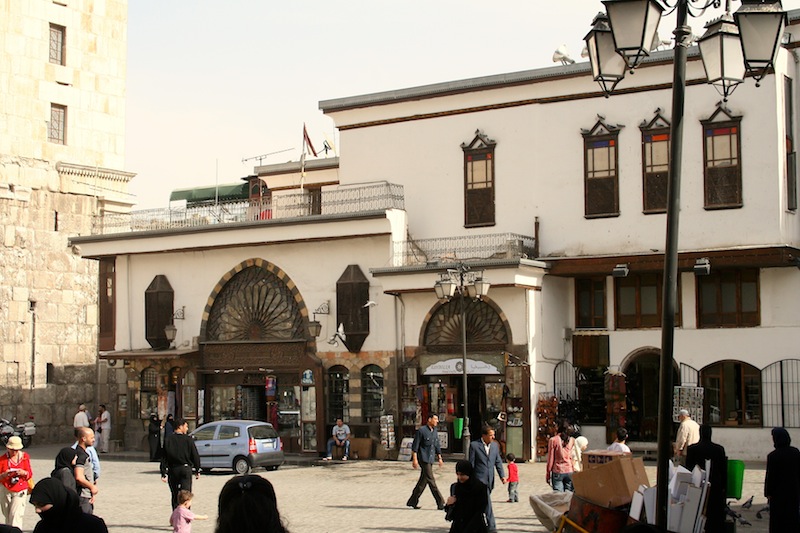 Walking back to the hotel through the narrow streets, we thought about all the treasures we did find like the Oud or arab guitar, the intricate wooden boxes or the beautiful old tiles. Nevertheless, we felt happy because the most meaningful treasure of all was without a doubt the souk and the people we met there in the heart of the old city of Damascus. It will always be part of our memories and I pray it will be safe from destruction… 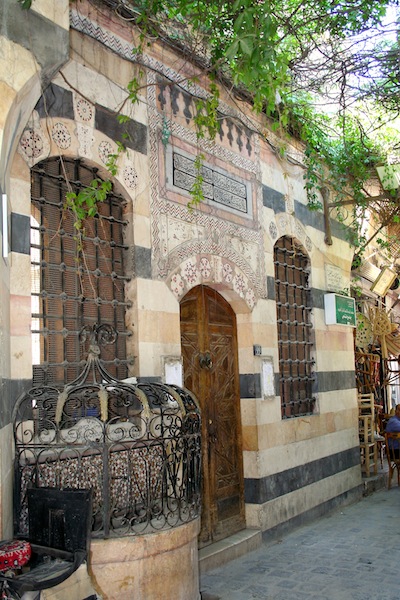