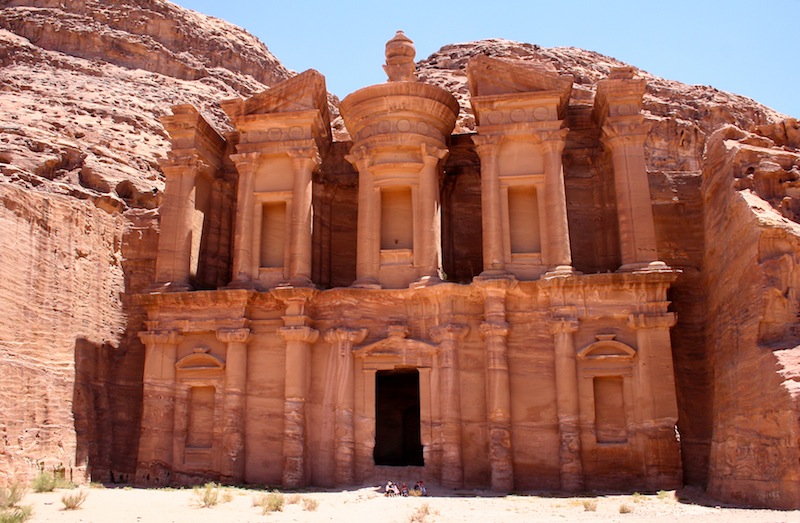 Chances are you already heard of Petra, the famous UNESCO World Heritage site  in Jordan 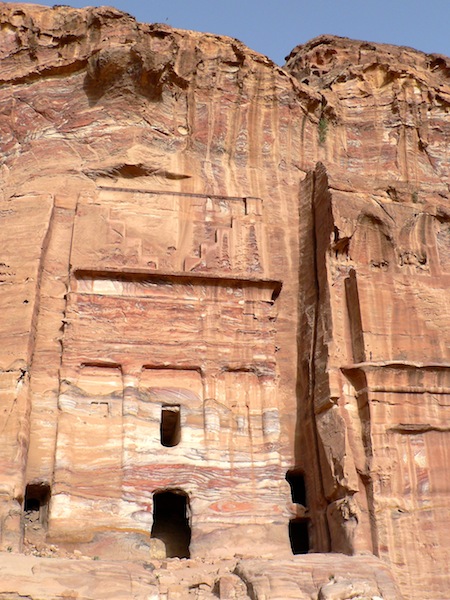 but maybe you haven’t heard of  the other World Heritage site, Mada’in Saleh in Saudi Arabia and why they  are connected. 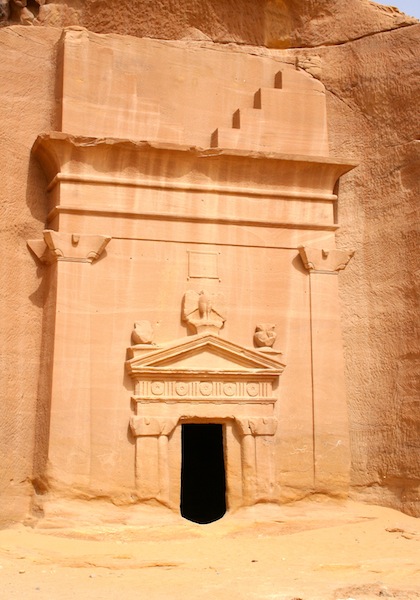 Petra also known as the “rose city”, is unreal. It has the most impressive geological formations and colour patterns I have ever seen. To reach the entrance of the city, you walk through a long and sinuous path. If  you don’t feel like walking all the way, then you can take one of these … 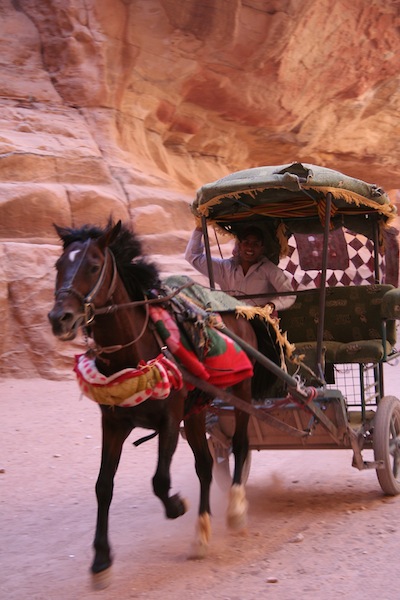 Along the path you start noticing the beautiful pinkish shades of the sandstone so vibrant and eerie. When you get to this point, you envision partially what is to come. My heart was racing with anticipation. I can only imagine what Burkhardt, the swiss explorer who introduced Petra to the world in 1812,  felt when he first saw it. 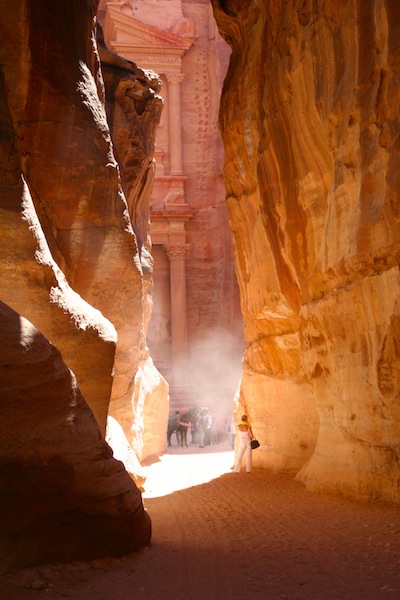 You take a step closer … 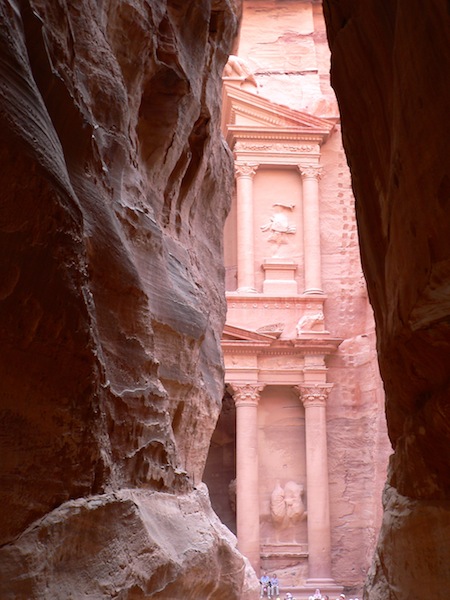 and an unimaginable world opens before you, starting with the Treasury building. 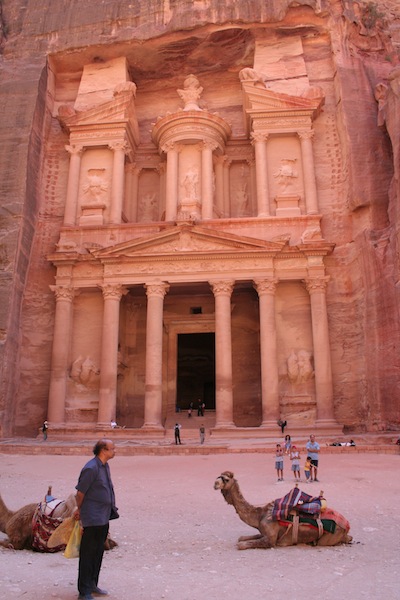 You wonder how this Nabatean merchant city was built out of the solid sandstone rock of these mountains and ridges.

The Nabataeans were an ancient nomadic arab people out of the Arabian desert. They are believed to have gradually started migrating around the 6th century BCE. They settled in southern Jordan, the Naqab desert in Palestine and northern Arabia. Having abandoned their nomadic lifestyle, they made Petra their capital and built this architectural marvel. You can’t help noticing the strong hellenistic influence in the architecture. In particular in the facades of the buildings and tombs. It is believed that Petra was already established as a capital as early as 312 BCE.

A very important factor in the success of Petra as a city, was the impressive Nabatean hydraulic engineering systems. They built water canals, dams and reservoirs. This assured the survival of the city and the development of agriculture.

You can still see part of these water canals that distributed water to the city and irrigated the land, as shown in the lower part of this photo 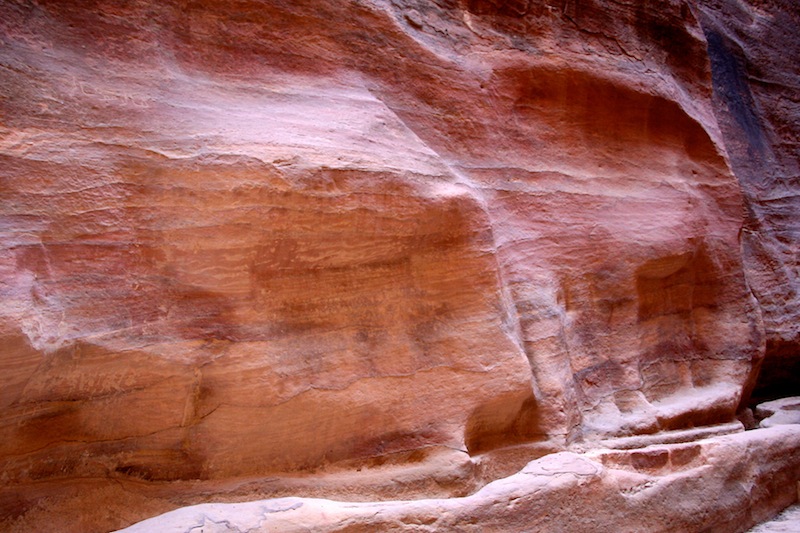 According to archaeologists, at the height of the Nabatean power and wealth, Petra must have had a population of 20.000 to 30.000 people. The Nabatean Empire became famous especially for its dominance in the spice and trading routes. They enabled the commerce between China, India, the Far East, Egypt, Western Syria, Greece and Rome. They maintained access to the Mediterranean through the Gaza strip. They also extended their control south to what is today Mada’in Saleh in Saudi Arabia. According to most experts, they made it their second city.

Their most important and lucrative trade, was incense. At the time the Greek States and the Roman Empire used great amounts of incense in their religious and civil ceremonies steadily increasing the demand. The Nabatean had trade agreements with both. Most of it was coming from Saudi Arabia originating in what is today Southern Yemen and Hadhramaut. Mada’in Saleh played a vital role in this trade.

The decline of the Nabateans started when the Romans found cheaper and alternative trading routes. They opened new maritime routes. The incense was transported on their ships up the Red Sea to ports that were closer to Egypt and the Mediterranean.

For a while the Nabateans managed to maintain their independence by allying themselves with the Romans. After the death of the  last Nabatean monarch in 106 CE, Petra was incorporated into the Roman Empire. The Romans renamed it Arabia Petra and a period of relative prosperity followed. However, the change of the trading routes to Syria and the expansion of the maritime trade, brought down their downfall. During the 4th century CE, Petra was eventually abandoned.

What is left are the amazing buildings where we can dream about the glorious past of this once great city.

The beautiful landscape will stay with you 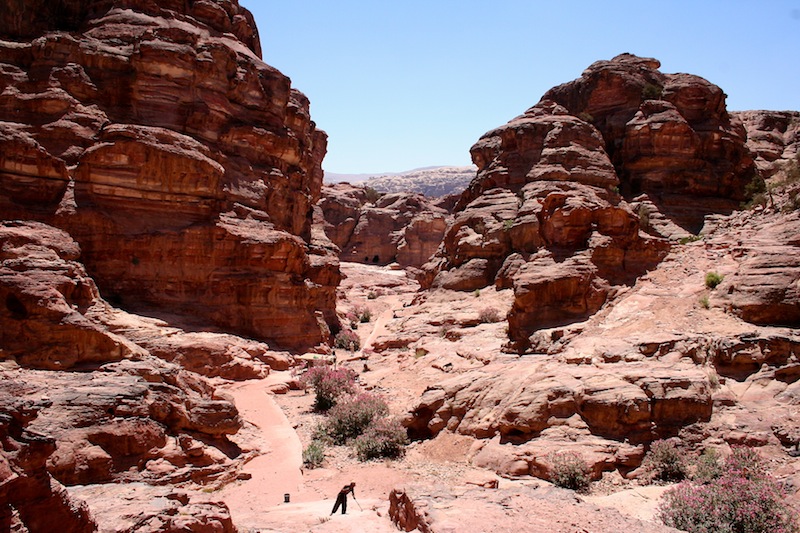 And the facades of some of the tombs 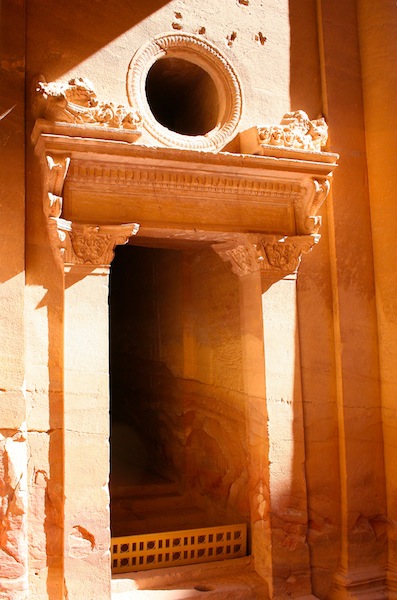 Which brings me to Mada’in Saleh… 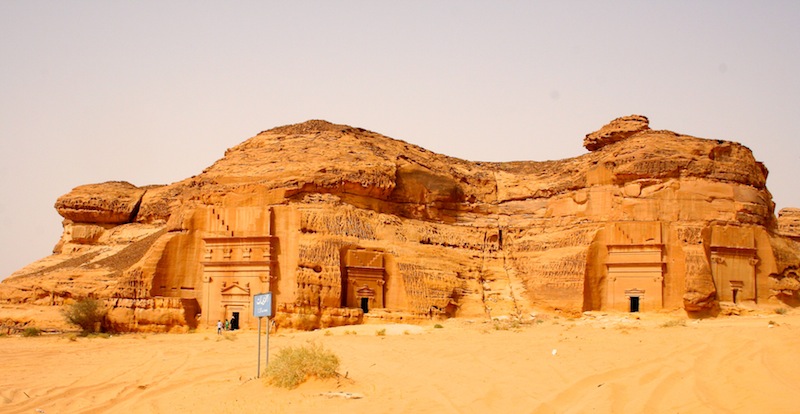 I cannot claim the city is as impressive as Petra but it is really worth a visit. It is even advisable if you start with Mada’in Saleh and then go to Petra. We did that when we made a long road trip in the Middle East. Of course there is the challenge of getting a tourist visa for Saudi Arabia. The Saudi authorities don’t usually give those easily unless you are a muslim and are going on a pilgrimage to Mecca or/and Medina. Otherwise, you either have to know someone that is living in the kingdom and can invite you for a visit or book a trip through a specialized tour operator. Additionally a special permit to visit the site is needed.

Most foreigners fly from Riyadh to Hail which has a small airport not far from Mada’in Saleh. The hotels near the site can then help you with a transport from the airport to the hotel. As the name indicates Mada’in Saleh is quite near Medina but unless you are a muslim you are not allowed to visit Mecca or Medina. If you are crazy enough to travel by car, like us, you have to be extremely careful not to get lost and end up near or in Medina where you can get into a lot of trouble if they catch you.

You usually hire a guide at the hotel that will accompany you to the site. There hasn’t been new archaeological excavations in Mada’in Saleh so it makes you wonder what could be beneath the dunes. That is why there is a lot of speculation about the importance and the size of the city during Nabatean rule. Some say the city was just a trading post, a point of passage for the Nabatean caravans. Others claim that Mada’in Saleh must have been a sizable city. By the amount of wells found and water distribution engineering systems, most experts tend to favor the second option.

You cannot help being impressed by the beautiful tombs. These are in better condition than the ones in Petra, particularly on the inside. 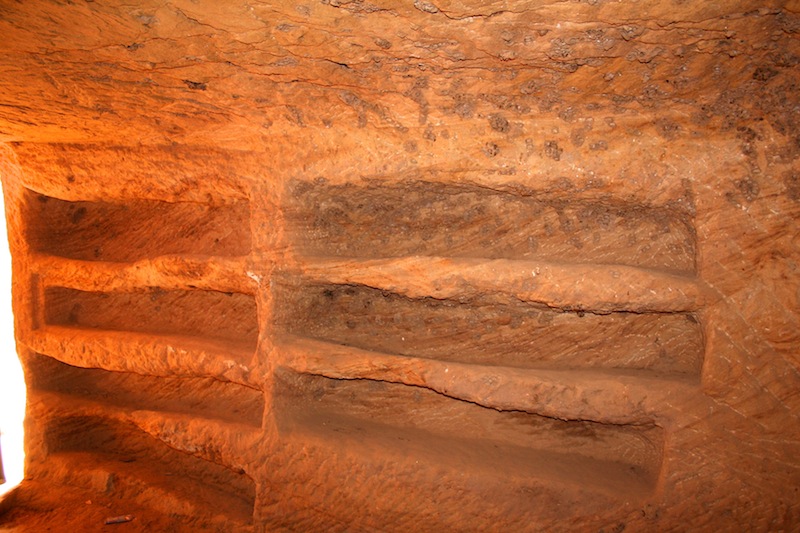 Outside the details and the facades remind you of Petra and show the same influences. 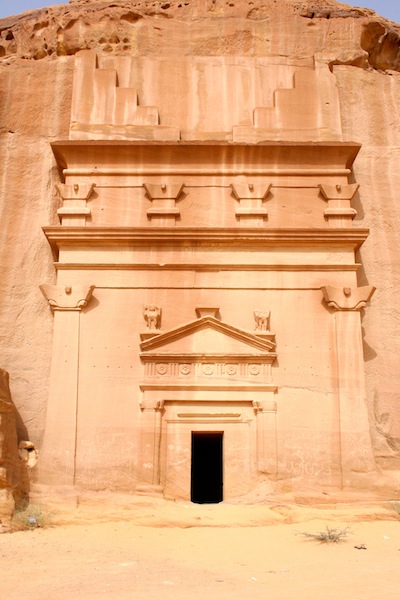 Some of the tombs are part of incredible rock formations 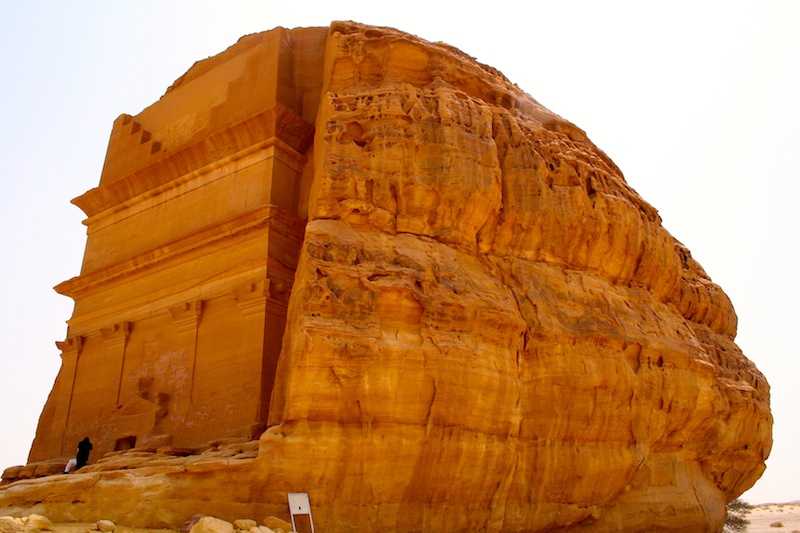 There are always charming details that catch your way 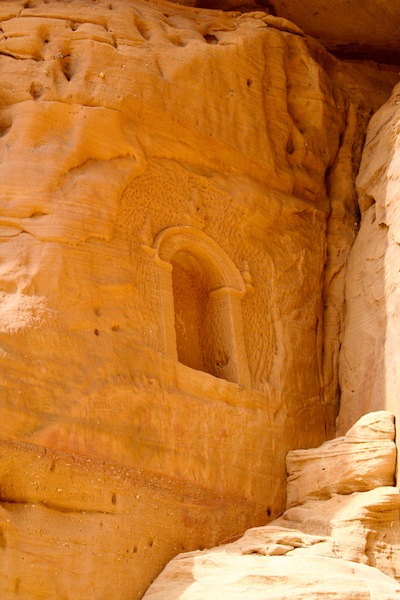 And such incredible landscape 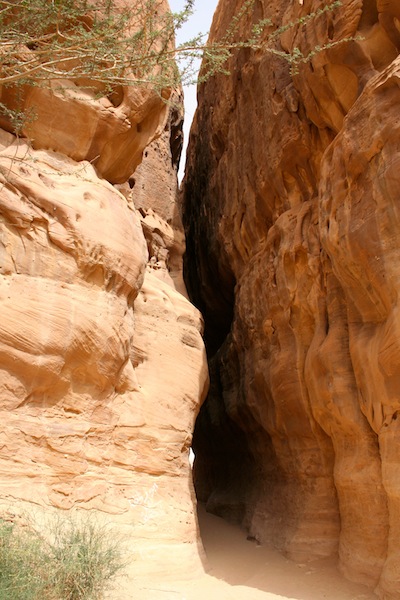 We also don’t know why the city was completely abandoned. Agriculture was present here. In principle, even with the trading routes no longer passing through the city, they could have survived.  The Koranic story of the prophet Salih suggests there may have been an earthquake although there is no scientific proof it occurred. The word in arabic may also suggest a punishment from God which some believe could have been a plague. The truth is nobody knows for sure. What remains are the architectural and the hydraulic engineering wonders that tell only a part of the fascinating story of the Nabateans.

If you can, this is a wonderful place to visit. The landscape in this area of Saudi Arabia is breathtaking. I’m very grateful for having seen it. Also in Mada’in Saleh, although more recent, you can find a very well preserved railway station of the old Hejaz railway. It still maintains some of its old locomotives. 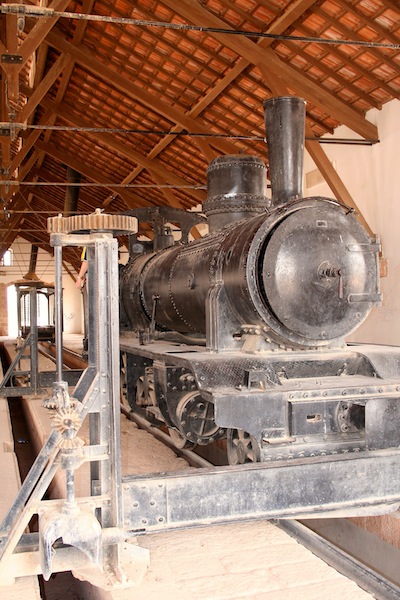 Built during the Ottoman period to connect Constantinople with Medina and Mecca, it reached Medina in 1908. It was later abandoned by the Saudis due to the many attacks and damage suffered during its existence. During World War I many attacks to the railway were instigated and led in this area by the famous Lawrence of Arabia. 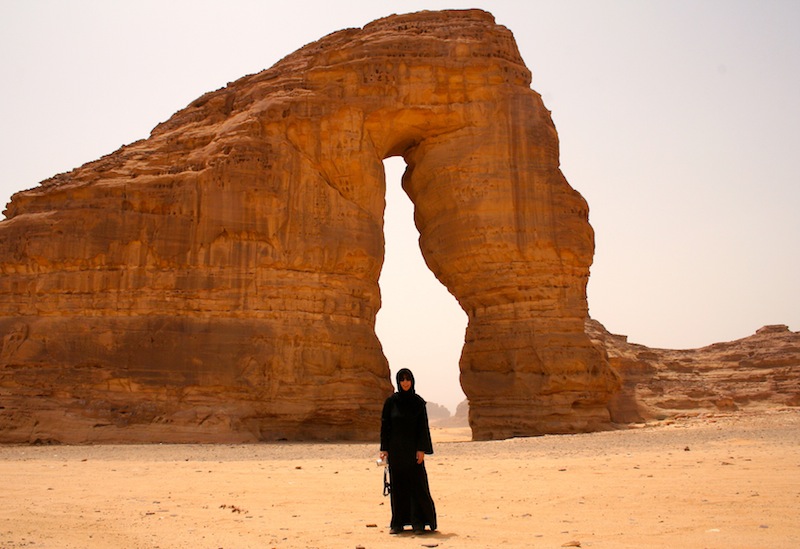