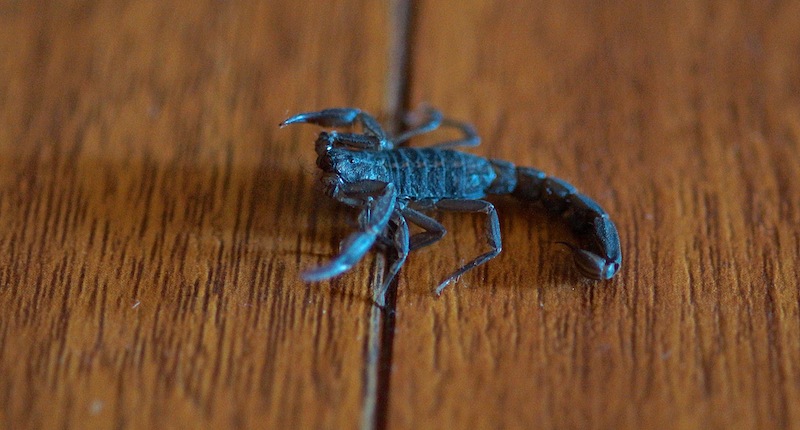 Have you ever had one of those?

You know, the one we can’t stand but keeps making an appearance when we least expect it? Like he is able to guess where you will be so that he can show up there?

The one we have tried to show time and time again how much he is not welcomed but he just ignores us, pretends he doesn’t understand and sometimes even brings friends along?

The one who doesn’t mind showing up at the most inconvenient times without a hint of shame?

The one who although you may be screaming at him and threatening to kill him, just stands there looking at you with his popping eyes and dares you to make the first move?

Well, if you live in Mexico and have a garden, like it or not, sooner or later you will get such an undesirable guest! Its name in Spanish is “Alacran” and this is how it looks like.

Somebody told me it could be a female since it is quite fat, whatever it was it frightened me, especially because I found it in my daughter’s bedroom when we came home. Apparently they are supposed to always move in pairs and every time I can only find one, I’m always wondering what happened to the partner.

All my Mexican friends keep telling me these darker ones are not dangerous and even if they sting you, nothing very bad will happen. I would rather not put their theory to the test, particularly with my daughter who is only three years old. So as soon as the picture was taken, I asked my husband (better shoes 🙂 ) to deal with it!

They really tend to appear at the most inconvenient times. One time we gave a reception at home with lots of people and we were just saying goodbye to some guests, when I look down and see a big one between our feet and theirs! I noticed someone had stepped on it but it was still hanging on to dear life! Quietly, I call one of the waiters and tell him to discreetly get rid of what was on the floor! I was really afraid someone would see it and would panic. He thought it was food but when he looked down and saw what it was, he got very pale and I could see the panic in his eyes! I looked at him in a way that meant, pull yourself together and get rid of it, now!!! In the meantime, I did not want my guests to move so I kept talking and talking and I could see they were wondering why I wasn’t letting them go, as was my husband who kept giving me weird looks!

Finally, the waiter came back carrying a thick cloth, bent down, got it and with a faint smile apologized for the inconvenience to my guests saying there was some food on the floor. Rather quickly, I apologized for delaying them so much and still a bit confused, off they went! My husband couldn’t stop laughing when I explained why I had been acting so weird.